‘Sick with worry…‘ tells the stories of “those doing it toughest, those for whom every day is a battle.” The compelling publication from the St Vincent de Paul Society – you can read some story snapshots at the bottom of this post – is one of a number of reports and recommendations released through the week to mark 2015 Anti-Poverty Week.

Anglicare Australia also released its 15th State of the Family ‘Who is being left behind?‘ (from which our featured image comes, above), which says it is clear that the right support at the right time can make the difference. It incorporates Anglicare Sydney’s research, A profile of deep and persistent disadvantage, which examines its Emergency Relief statistics to identify those most at risk.

Residents of outer suburban Miller in Sydney fear these lessons may not be heeded for their popular local community health centre, The HUB. See the article below from local resident Eileen Neale, and a statement provided to Croakey on Thursday from New South Wales Health’s South Western Sydney Local Health District.  You can also read some background to the origins of the centre and the wider concerns of the area from this 2011 Inside Story article by Croakey editor Melissa Sweet. 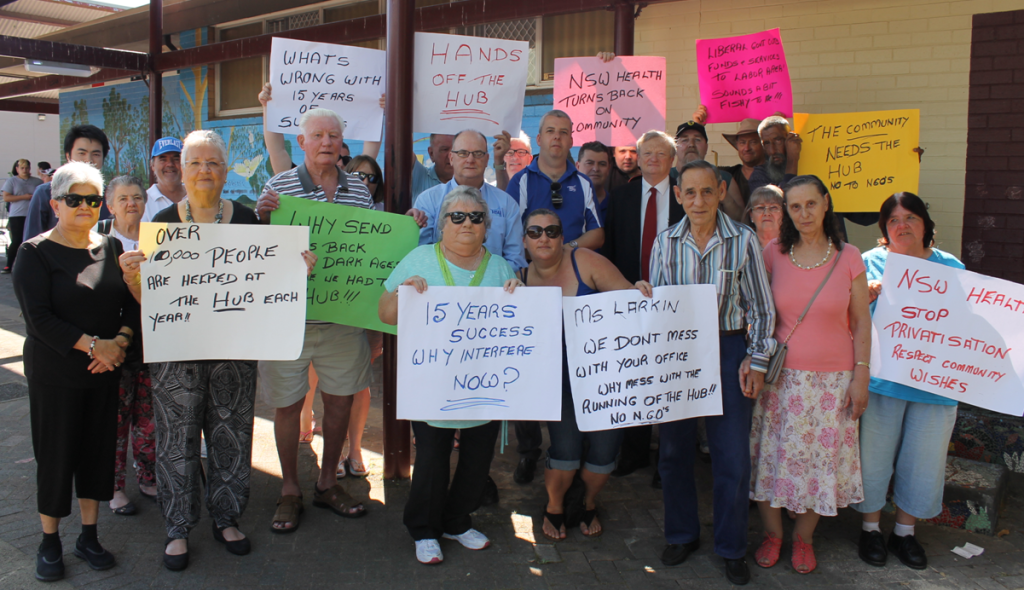 If life is not already tough enough for the most disadvantaged communities in south-west Sydney, it will get a lot tougher when NSW Health actions its plans to outsource The HUB Community Health Centre, in Miller.

The decision follows global trends of outsourcing healthcare and is one recommendation of a recent commissioned PriceWaterhouseCooopers (PwC) Community Health Review report. However, it is clearly ‘bad’ public policy.

The HUB is situated in the centre of high density social housing in Miller and presently serves a population of approximately 42,000 residents in the 2168 postcode.

It opened in 2000 to address significant community health concerns including the poor health status of the community, visible drug and alcohol use, health problems associated with unemployment and increasing discontent in the community about services provided to them.

Fifteen years on, the area is in much better shape. This is largely due to the fact that The HUB uses internationally acknowledged and recognised health promotion principles and practices to deliver health programs and services that focus on the broader influences on health, social, cultural, environmental and economic factors, rather than disease and injury.

However, there is still long way to go, as highlighted by the findings of the 2010 Miller Household Survey which found 39 percent of 3,000 residents rated their health as poor or fair, and that 70 per cent of residents were concerned that drug and alcohol problems divided the neighbourhood a bit or lot.

Outsourcing the local community health centre to a non-government organisation or perhaps a private provider is not the solution to effectively and efficiently address these issues. The experience of privatisation in the United Kingdom tell us that we could see a decrease in the quantity and quality of health services and higher costs due to a lack of long term sustainable funding, loss of expertise and fragmentation where agencies aggressively compete for the same finite pool of money to maximise profit, which often undermines any collaborative working practices and good communication across services.

No wonder residents are bitterly disappointed and absolutely angry with NSW Health.

We need further commitment and investment so that The HUB can offer a wide range of health programs and services including clinical chronic disease care for our growing and ageing community – not for South West Sydney Local Health District to step away.

The community was never consulted about this, and we do not want this to happen. Over 1,000 letters from residents have been sent to the NSW Health Minister, but no one is listening.

The Hub is a highly valued service and an important part of the Miller community. In July I met with volunteers and community members to discuss their concerns. All present were reassured that there are no plans to close the service.

Following a review completed last year into all Community Health services delivered across the District, we are exploring ways in which the social and welfare services provided by The Hub can be provided by the non-government (NGO) sector.

The District has called for proposals from NGOs who are interested in managing The Hub’s services.

Interested providers had the opportunity to demonstrate their capability to deliver a service that meets community needs. This has been undertaken in consultation with community members.

The report says its research reveals that there are three main issues faced by the people that Vinnies assist: inadequate housing, low income, and health and disability. Three cross-cutting themes exacerbate each of these problems: stigma, instability and gender.

[quote font_style=”italic”]It is strikingly clear from these stories that it is these barriers pushing people down:the causes of poverty are not individual, but structural. The solutions must be too.[/quote]

Here are some of their client’s stories: 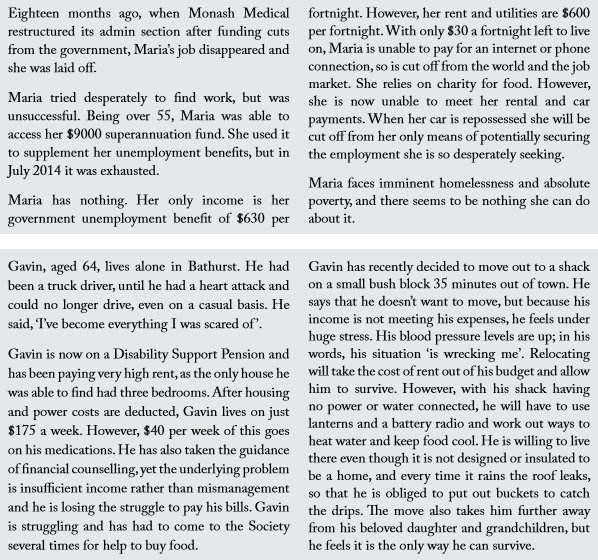 PrevPreviousConference puts the spotlight on tobacco control in the Oceania region
NextHealthy Tasmania: vision to be the healthiest population by 2025Next