If you’d like to see more open disclosure of the financial ties between the medical industry and health professionals, you might like to consider signing this petition.

Public health campaigner Associate Professor Ken Harvey, of La Trobe University’s School of Public Health, explains some of the background to his petition below.

The Australian Competition and Consumer Commission (ACCC) is holding a pre-decision conference on 12 November 2012 in relation to its draft determination proposing to grant authorisation to the 17th Edition of Medicines Australia Code of Conduct for the next three years.

Many submissions sent both to Medicines Australia and the ACCC requested comprehensive disclosure of payments made to health professionals by pharmaceutical companies similar to the US Physicians Payment Sunshine Act.

I have created an online (private) petition in which signatories ask the ACCC to make the following changes to its draft determination.

1.  Reduce the period of authorization of the Code of Conduct to one year (2013).

2.  Request Medicines Australia to submit a revised Code to include arrangements covering transparency of relationships between the pharmaceutical industry and individual health professionals for authorization at the end of 2013.

3.  Request Medicines Australia to increase the number of informed critics of their current Code regarding transparency matters on the transparency-working group.

I’d be most grateful if readers could consider signing the petition ASAP so that we can present the results to the ACCC at the pre-decision meeting on November 12. 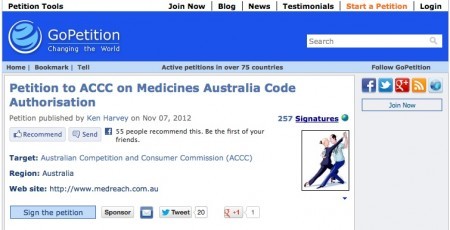 The Health Wrap: from the arts to the Olympics, some deep diving