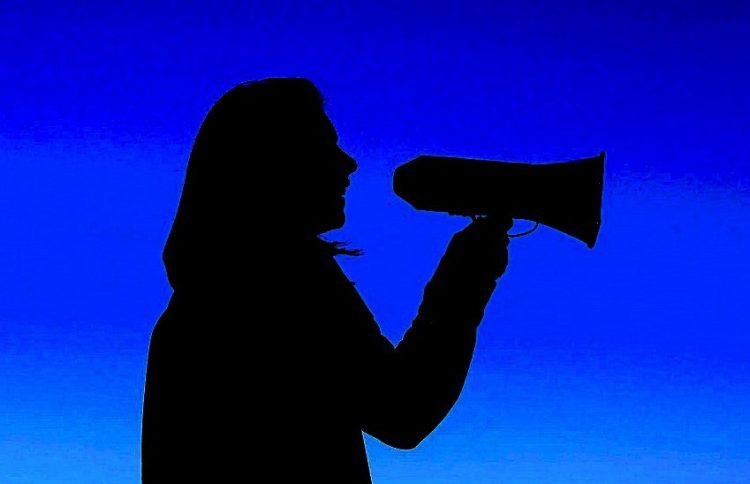 Introduction by Croakey: Charities have been under fire on the legislative front in 2021, and now changes to electoral laws mean they will face more regulation if they engage in the electoral process.

The Australian Council of Social Service is sounding the alarm, tweeting that the move “could stifle the voices of charities and the communities they represent”.

The move has cut short celebrations following the ditching of other proposed regulatory changes, which Croakey reported would have put charities and other organisations at risk if staff were found in breach of a wide range of summary offences, including minor infringements, such as blocking a footpath or a sit-in in an MP’s office through to protest related activities.

In the article below, first published in The Conversation, Krystian Seibert, from the Centre for Social Impact at Swinburne University of Technology, argues the new laws, which lower the threshold for organisations to be registered as a so-called “political campaigner”, could see charities become cautious about engaging in the democratic process.

The final two sitting weeks of Parliament this year have provided both good and bad news for Australian charities.

Last week provided the good news, with new government regulations that would have curtailed the ability of charities to engage in protest disallowed by the Senate, meaning they will not take effect.

Charities were relieved to see this, as many faced the prospect of having to pull back on certain advocacy activities.

But this week brought the bad news, with changes to electoral laws passed by Parliament that will impose more regulation on charities and other organisations that engage in the electoral process.

Despite intense lobbying by a coalition of charities, a last-minute deal between the Morrison Government and the Opposition led to the bill’s passage, albeit with some amendments that slightly lessen its negative impact. 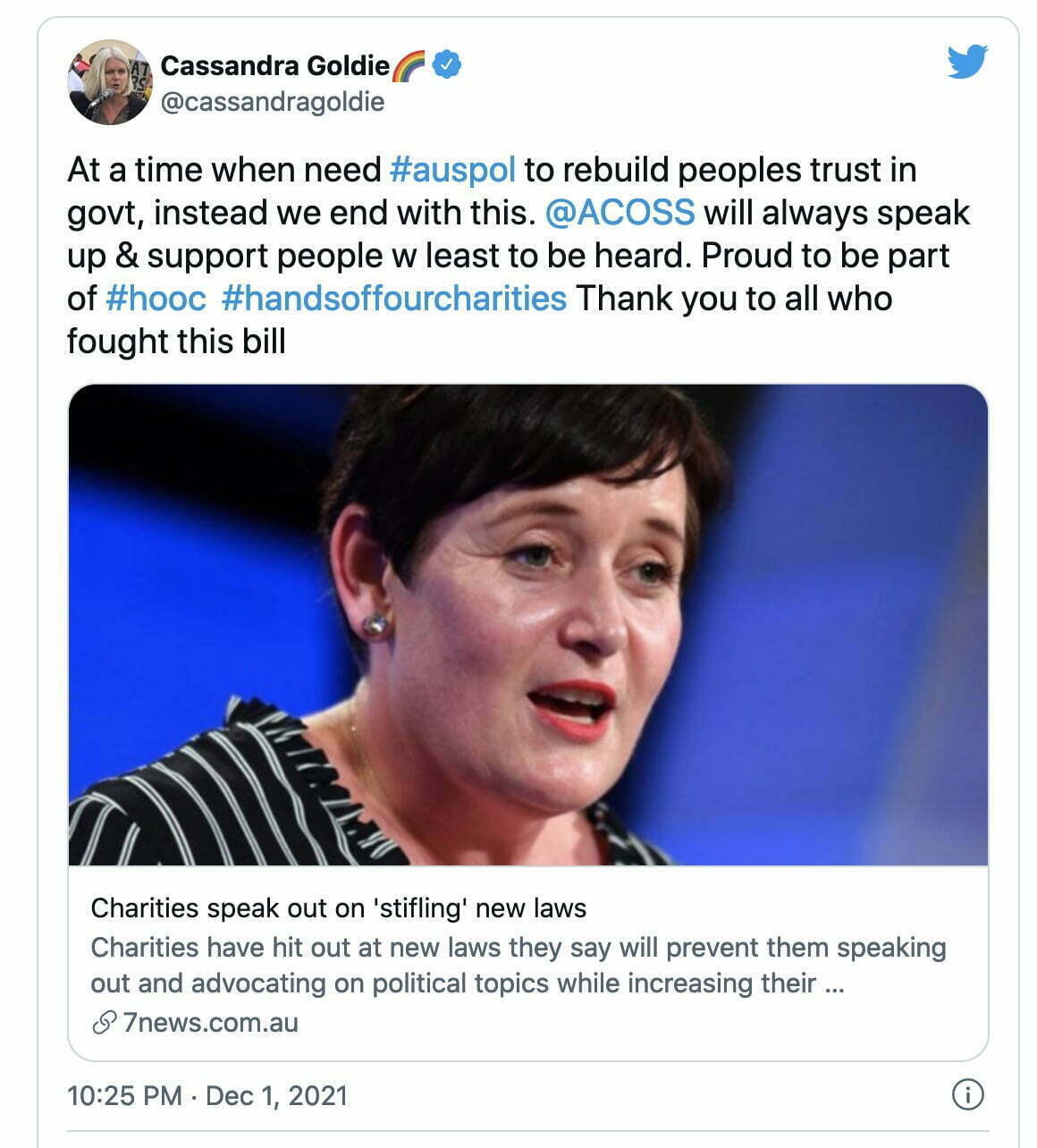 Impact of the law

One of the main changes in the new law is the introduction of a lower threshold for organisations having to register as a so-called “political campaigner”.

Previously, an organisation had to register as a political campaigner if it exceeded $500,000 in electoral expenditure (money spent on campaigns, advertising and any other advocacy work seeking to influence voters in an election) in any of the past three years. The bill sought to lower this threshold considerably to $100,000.

As part of the deal between the Government and Opposition, this threshold was changed to $250,000 in the final version of the bill that was passed. This is an improvement on the original proposal of $100,000, but it still means many charities will be captured by the change.

More charities will now be required to register as political campaigners and be subject to the additional reporting obligations this entails, including identifying their larger donors.

Opponents of the bill fear it will act like a spending cap, with charities stepping back from campaigning to not trigger the additional requirements that come with being a political campaigner. 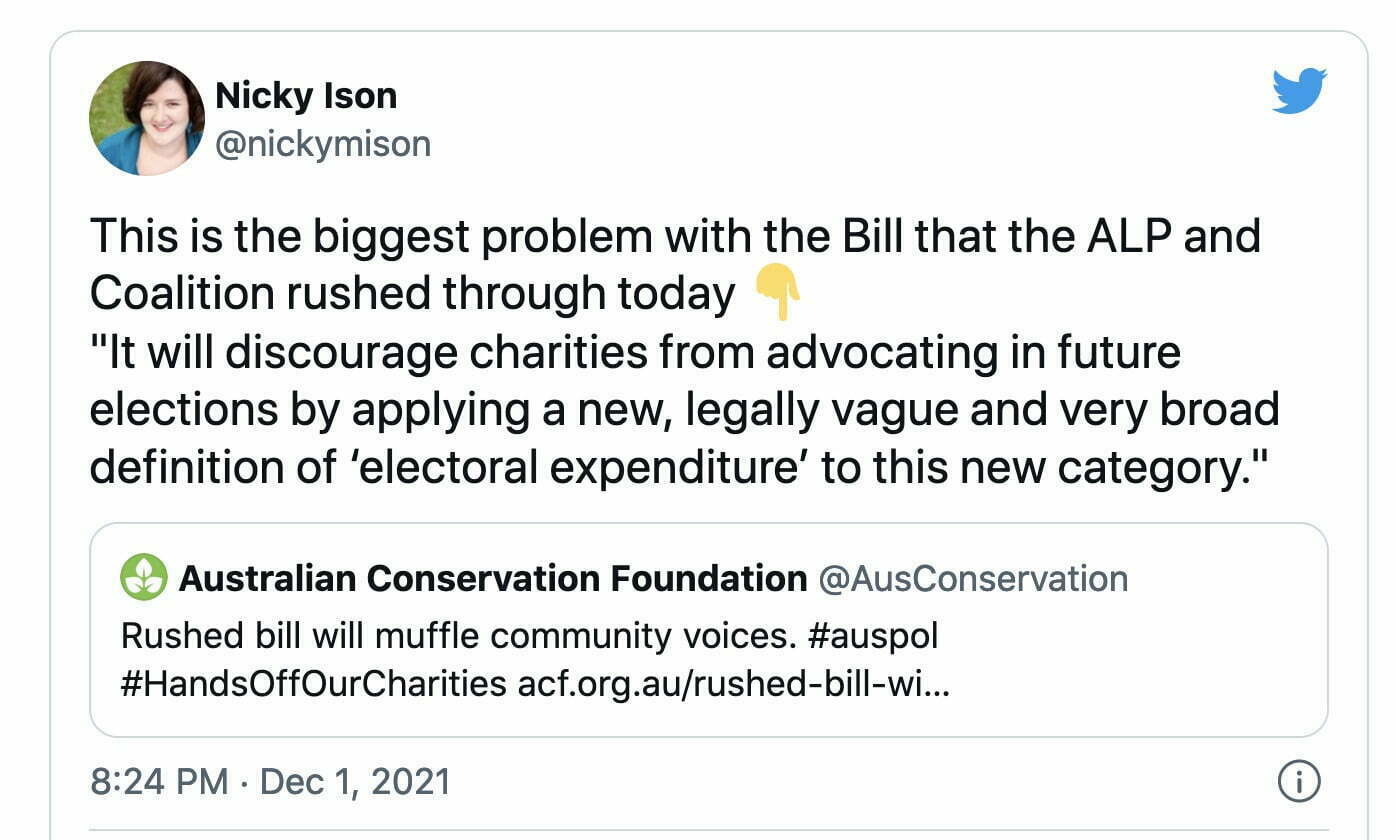 In addition to lowering the threshold, the bill also broadens the type of expenditure that is relevant for determining if an organisation is subject to any reporting and other obligations.

Now, any expenditure “in relation to an election” must be counted, but there is no guidance as to what this actually means. This is a significant source of uncertainty for charities, and again may lead many to be more cautious when engaging in the democratic process.

Another problematic element of the bill is the fact it will apply retrospectively to money already spent by an organisation. Charities will have to look back at their spending and see if it constitutes an “electoral expenditure” using the more vague definition now in place, and determine whether this places them in the category of a political campaigner.

Pages and pages of legal advice will be needed, but lawyers won’t have much to go on given the scant detail provided in the bill.

One positive outcome, however, is that “political campaigners” will actually no longer be referred to by this name – the term will change to “significant third parties”.

This is a welcome change, given the term “political campaigner” could lead to people conflating charities and other organisations with political parties – despite the fact they are not seeking elected office and focus on issues-based campaigning. 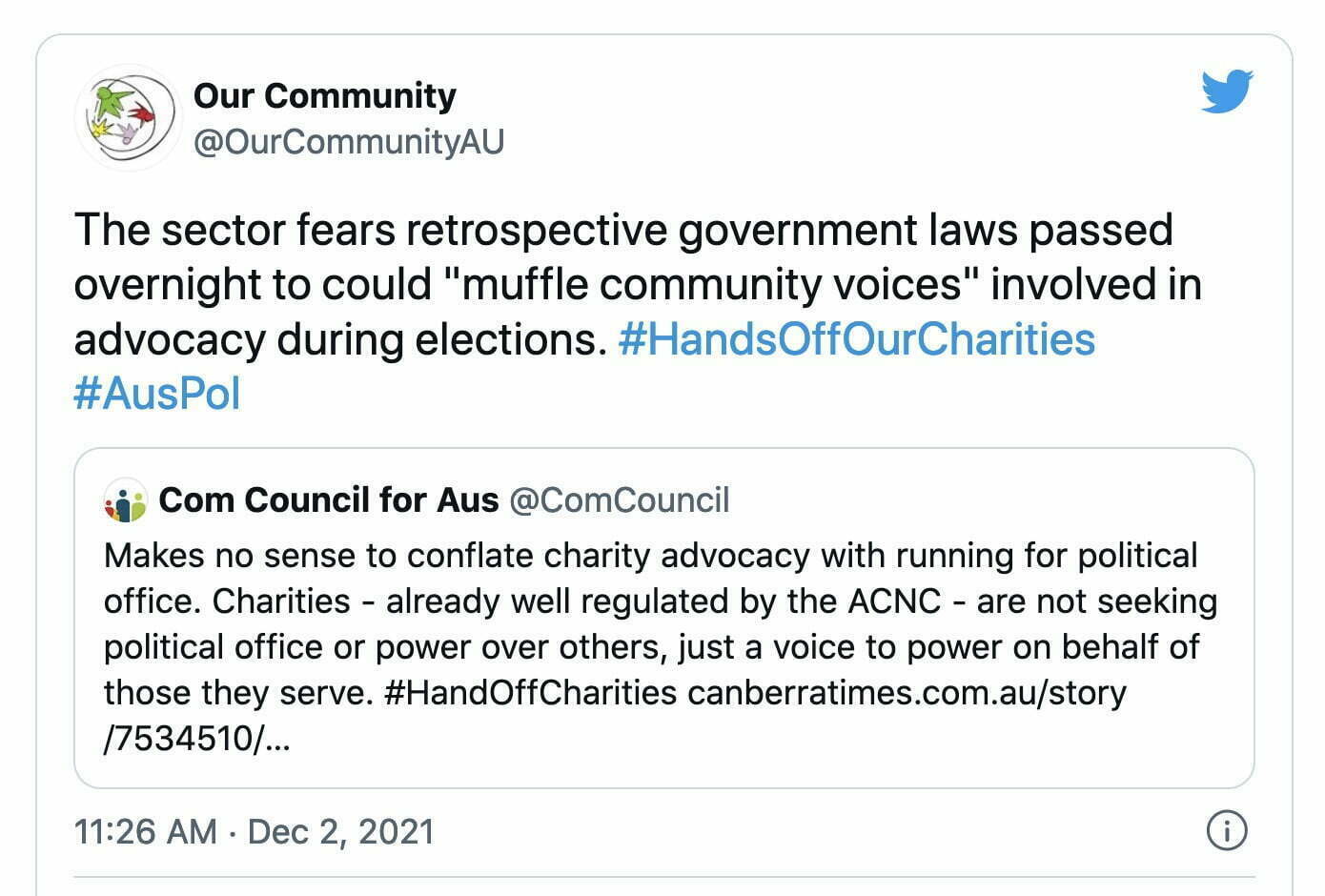 Ultimately, the bill is a problem because it will hinder the advocacy activities of charities. And advocacy is one of the key ways that charities can address the root causes of the social and environmental challenges they seek to ameliorate. This often requires changing government policy.

Charities can lobby and campaign to do this – provided they stop short of endorsing and supporting particular parties or candidates.

Advocacy activities can still take place in the context of an election, though. For example, charities can take out advertisements outlining or critiquing the positions of different political parties on issues as diverse as climate change or the amount of JobSeeker payments.

Charities are already regulated when they incur “electoral expenditures”, with the Commonwealth Electoral Act 1918 imposing various obligations on them (and any other organisations similarly involved in the electoral process).

They may be classified as a “third party” organisation or need to register as a political campaigner“.

A certain level of such regulation is necessary, in the interests of promoting transparency and integrity in elections. The problem with the bill is that it takes things too far.

Otto Von Bismarck is believed to have once said, “Laws are like sausages. Better not to see them being made.”

The statement rings true given the developments this week. The changes to electoral laws were rushed through parliament, without even being referred to a committee inquiry to examine the details of the bill and its implications.

A last-minute deal saw some of the problematic elements of the bill wound back, but what was passed remains deeply flawed.

More charities will now be subject to additional reporting and other obligations under the electoral laws, and there is now more uncertainty about what spending counts as “electoral expenditure”.

This may mean charities will be more reluctant to engage in advocacy, especially where any link can be made between their work and an election. This would lead to less debate about the various social and environmental challenges we confront as a nation.

We need more engagement in our democratic process in Australia, not less, and this bill represents a setback in that regard.

Krystian Seibert is from the Centre for Social Impact at Swinburne University of Technology. Disclosure: Krystian Seibert was an adviser to a former Australian Assistant Treasurer between 2012 and 2013, where he oversaw the establishment of the Australian Charities and Not-for-profits Commission and its regulatory framework, including the Charities Act 2013. He has provided advice and support to Hands Off Our Charities, an alliance of charities that opposed the bill. This article was first published in The Conversation under the headline, ‘Are charities being silenced? Why a new law is alarming activists and could scuttle their election campaigns’.

See previous Croakey articles on the regulation of charities.