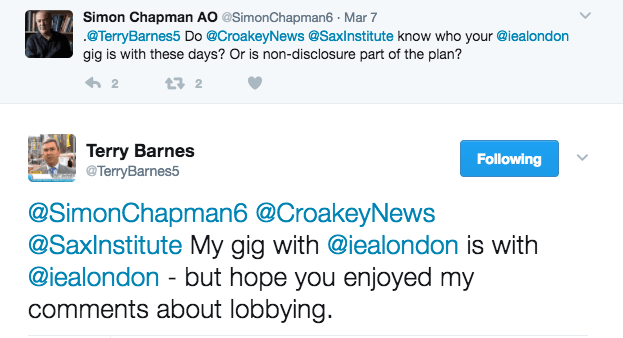 Simon Chapman asks Terry Barnes: why write for Croakey when your support lies with a right wing think tank?

Earlier this week Croakey published an article on health advocacy from health consultant Terry Barnes, which noted he was a former advisor to Coalition Health Ministers Michael Wooldridge and Tony Abbott and known for his championing of a GP co-payment.

In a comment added to the post, Simon Chapman, Emeritus Professor in the School Public Health at the University of Sydney, highlighted and challenged Barnes’ affiliations with the right wing UK Institute of Economic Affairs and questioned why, with such an agenda, he had offered the piece for a public health champion like Croakey.

It raised important issues on transparency and values that can be lost at the bottom of a post, so we asked for Chapman’s permission to run his comments as a separate post and invited a response from Barnes.

Both are published below. We of course welcome other thoughts from Croakey readers.

Nice piece – I agree 100% and you must be very pleased with all the tweets!

But sorry to bring this up, your disclosure at the end of the piece is a little … well … incomplete. It’s very relevant to know that you used to work for politicians. But also very relevant to also know what you are up to these days. One of your gigs is that you are a ‘fellow’ in ‘Lifestyle economics’ at London’s Institute of Economic Affairs. You even have an English phone number listed there!

For those who don’t know, the IEA is a right wing think tank which has money poured into it by big tobacco and who knows who else (disclosure not being a priority) to defend their interests. See http://www.tobaccotactics.org/index.php/Institute_of_Economic_Affairs & https://twitter.com/SimonChapman6/status/501548198784430080 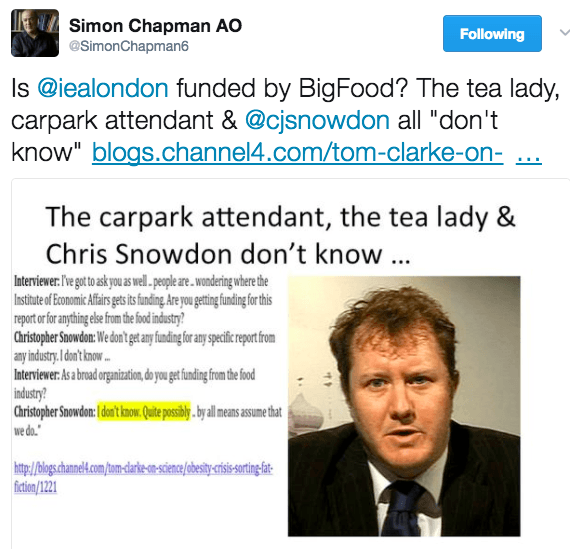 Your boss there is angry boy Christopher Snowdon who regularly writes splenetic bile about public health like this http://www.spiked-online.com/newsite/article/the_disease_of_public_health/14204#.WL-vSxBQrPv

My guess is that 99.9 per cent of Croakey readers would reach for any anti-nauseant within a few paragraphs of Snowdon’s fare. He once published a tweet about an English agency which was concerned about “elderly, frail and chronically unwell people” living in poorly heated housing in winter. They were advocating a policy to ensure that a minimum temperature of 18 degrees Celsius could be guaranteed in housing policy.

Appalled, Snowdon tweeted that “I yearn for the resignation and suicide of everyone who works at this pointless, tax-sponging quango”. 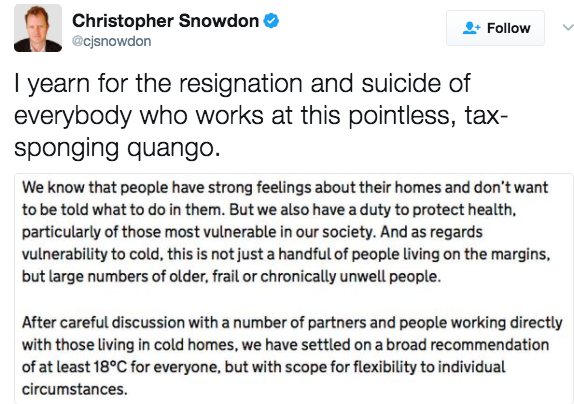 Call me a bleeding heart, but that’s one of the most disgusting statements I think I’ve ever read.

So I’m intrigued. Why is it that you wrote such a helpful article for Croakey, Australia’s premier public health website, when you apparently feel comfortable helping Snowdon and his ilk along with their mission?

I welcome Professor Chapman’s comment and interest in my work.

My part-time fellowship with the IEA has enabled me to pursue long-standing policy interests in sensible harm reduction, particularly but not only in relation to tobacco.  This fellowship is also just a part of my professional work, as I also receive income from my consultancy work and writing for newspapers and magazines.

In the last couple of years I have joined the public policy debate about the value of vaping as a disruptive technology offering real harm reduction opportunity, and I am on the other side of the fence to Simon on this issue. The IEA, nor any of its donors, have not told me what to think, write, or say. Nor should they.

It’s worth noting that Government, which gives lavish public funding to universities, research institutions and harm reduction researchers, derives a significant portion of its revenue from tobacco and alcohol excise.  Should researchers like Simon therefore refuse to accept public money, or does it stop them thinking independently? Of course not.

However, in relation to my unsolicited and unpaid article about effective advocacy in the Health portfolio, all this is irrelevant. What matters is my years of experience as a senior ministerial adviser dealing with the healthcare sector, with all its joys and frustrations. There was no conflict of interest to declare.

But for Google and the record, I’ll state I have an intimate association with a range of measures that most Croakey readers will not have approved. In 1996, the Commonwealth Dental Health Programme was abolished on my personal recommendation to the then Health minister, Michael Wooldridge.

In 1997, I was instrumental in introducing the current rebates and incentives for private health insurance, funds many in the sector think should go to public hospitals instead. In 2004, the 12.5 per cent automatic generic medicines price cut was my idea. Also in 2004, I led the Coalition’s successful demolition of Labor’s Medicare Gold policy, a policy welcomed by leading healthcare advocates with Croakey associations.

In 2007, the federal takeover of the Mersey Hospital was done on my recommendation to the then Prime Minister. And, of course, in 2013-15 I passionately advocated a modest GP co-payment, and I continue to advocate reasonable price signals in GP and ED services for all who can afford them. The paper I wrote that kicked off that debate was commissioned and paid for by a private health industry-funded think tank, the Australian Centre for Health Research.

Readers will probably disagree with all of these positions, but in each of these instances I argued in good faith for what I believe are the best interests of sustaining a world-class health system and its ability to improve the overall health of Australians. That motivates me now in respect of harm reduction and vaping as an alternative to deadly tobacco smoking, and promoting appropriate legislation and regulation around it.

I’m prepared to accept Simon Chapman is motivated similarly in his taking a different position to me but I also believe, however, in striving to treat those with different views with respect and good humour, even for hot and controversial issues and even if I disagree strongly with them (although I confess I have sometimes slipped).

Does my regularly advocating contrarian views to the sector’s prevailing policy wisdom make my substantiated opinion any less valid than anyone else’s? That’s for others to decide. I do believe, though, that an intelligent, responsible community of ideas like the Croakey readership can sustain and tolerate a diversity of views and perspectives.

But if Professor Chapman finds my past and present associations questionable – and clearly there is no love lost between him and my IEA friend and colleague Christopher Snowdon – that is a matter for him.

PrevPreviousThe mysterious disappearance of health from New South Wales planning laws
NextNo Jab No Play: vaccination rules should be fair to all childrenNext