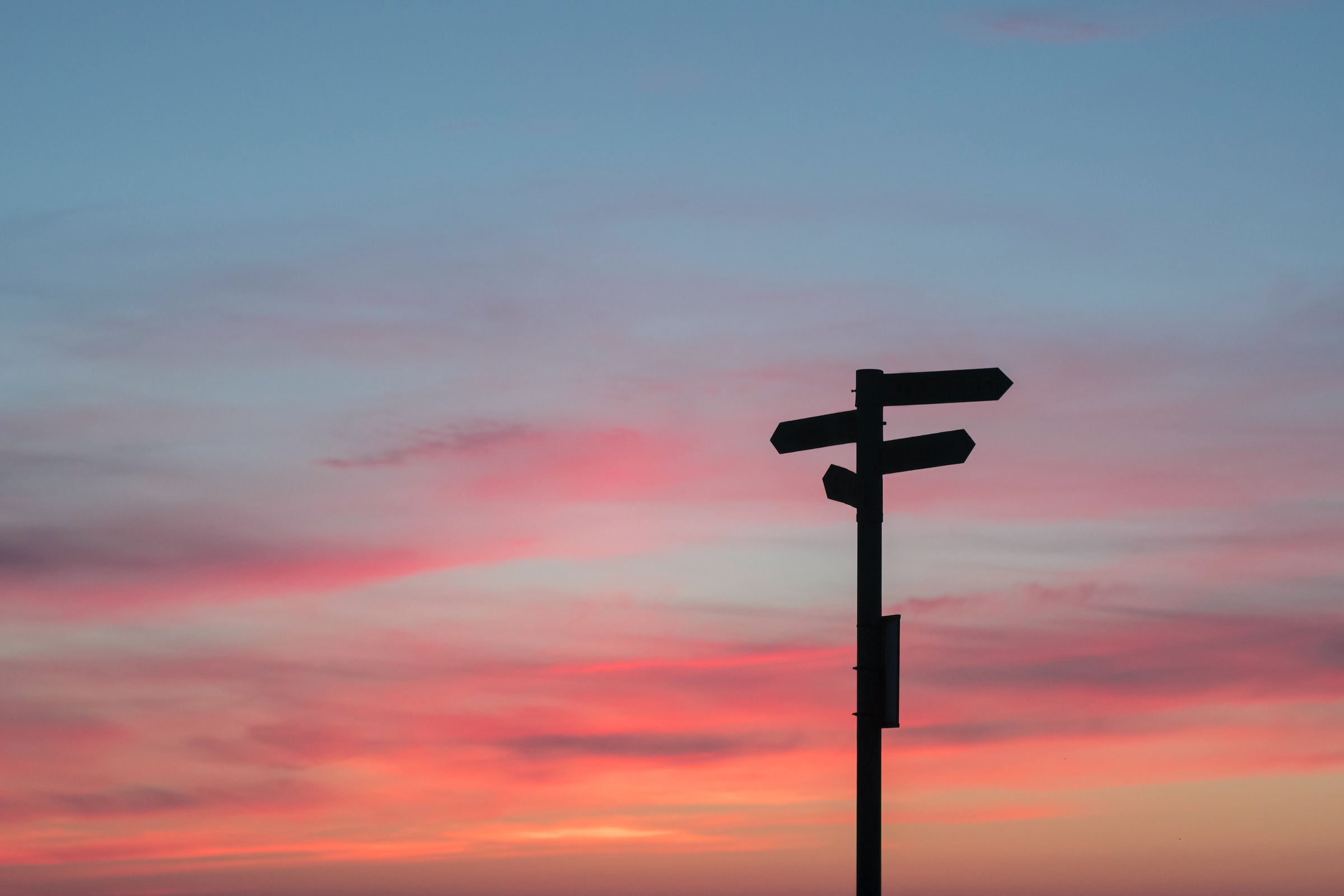 Introduction by Croakey: On 13 December, the Strengthening Medicare Taskforce held its sixth and final meeting, releasing a communique that identified four priorities for primary care reform.

These are: increasing access to equitable and affordable primary care, encouraging multidisciplinary care, modernising primary care through data and digital reform, and supporting organisational and cultural change in the primary care sector.

On 5 January, Health and Aged Care Minister Mark Butler told a press conference that the Taskforce report was being finalised and would be published over coming weeks, to enable decisions about investment in the May budget.

While we await these next steps in what the Minister says will require “a determined long term effort” that extends beyond the remit of any single budget, Grattan Institute researchers have drawn upon the chequered history of previous reform efforts to develop some suggestions to support future reforms.

News of a crisis in general practice dominated the headlines last year. Just before Christmas, the federal Taskforce charged with fixing it wrapped up. They had just six months to come up with a plan for solving a crisis that has deep structural roots.

As we showed in our report, A New Medicare, Australia’s general practice system was designed for an earlier era and hasn’t been updated in response to the rise of chronic disease. GP work has grown more complex, but the model for general practice has changed little.

Compared to peers overseas, Australia’s GPs have far less support from a broader care team and have to pack more and more care into 15-minute appointments. Any attempt to change is hampered by fee-for-service funding, which promotes churn, blocks team care, and which almost all other wealthy countries have moved away from.

There are clinics in Australia where multidisciplinary teams and flexible funding support high quality chronic disease care. In particular, this is common in Aboriginal Community Controlled Health Services and in community health providers. But reform is needed to make these models viable in clinics across the country.

The Taskforce’s final communique was promising. It supports key recommendations in our report, such as multidisciplinary team care, a blended funding model, and a bigger role for Primary Health Networks.

The communique sets out broad directions for general practice. The question now is how to make those changes, so that this time they stick. To do so, the Government must learn from decades of stalled attempts to shift the system.

Four national pilots, or trials, for general practice reform have been run over the past four decades (see Table 1). None have stuck.

The Howard Government ran two iterations of trials to modernise care for chronic disease patients. The 1990’s Coordinated Care Trials were probably the most ambitious Australia has run – pooling funding at both state and federal level to flexibly fund coordinated chronic disease care. Most trial objectives weren’t achieved, but many things were learnt.

The outcomes of the next version of the Coordinated Care Trials were better on all counts: improved patient self-reported health, lower hospital demand, and costs trending in the right direction.

Table: More pilots than Qantas – what have we learned from three decades of primary care reform trials? 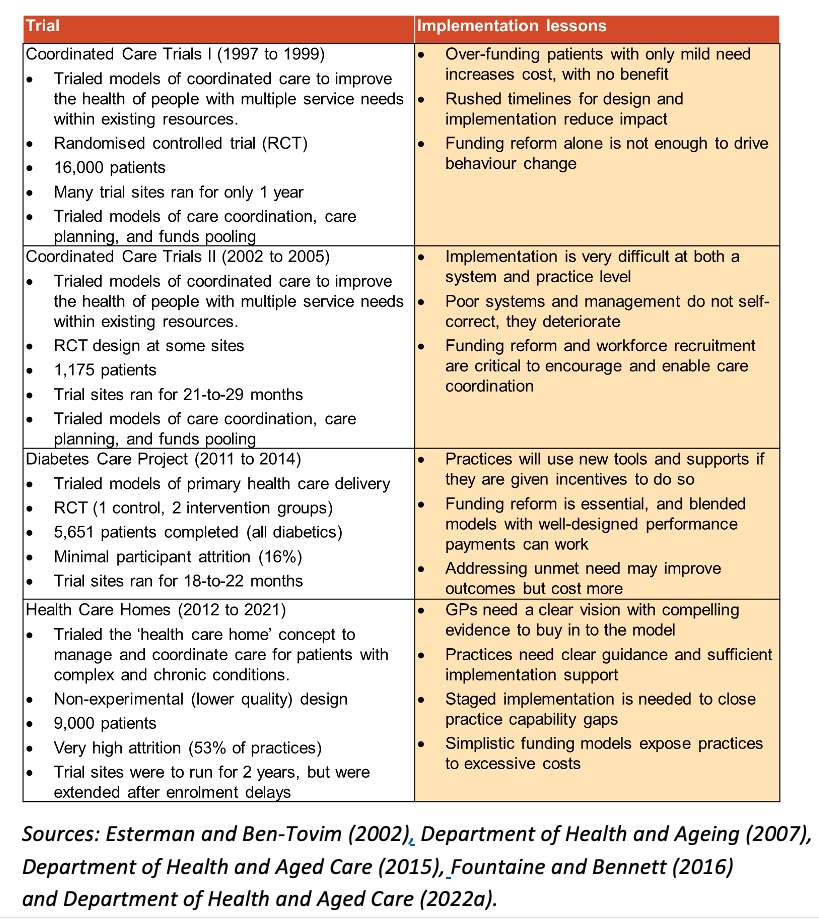 The third trial, the Gillard Government’s Diabetes Care Project, was perhaps the most successful. It trialled blended funding adjusted for patient need, among other changes. There were significant improvements in patient health for those in greatest need. Costs and hospital demand were again trending in a very promising direction.

What these three trials had in common was high-quality experimental design, large-scale participation, and a trajectory of learning from, and improving on, what came before.

By contrast, the most recent trial, Health Care Homes, failed to lock in earlier gains and build upon success. Instead it had a poorer design, with less sector uptake and worse outcomes, than its predecessors. The final evaluation showed it had achieved none of its objectives.

We must break this cycle. To make the next reform stick, governments must learn six lessons from the previous trials: show where we’re going, plan the journey, bring people along, help clinics change, provide certainty, and support shared leadership.

First, Federal Health Minister Mark Butler will need to invest much more time upfront in engaging clinicians and the community in a shared vision for ‘a new Medicare’. The GP sector have been bruised by Health Care Homes, the pandemic, and the long Medicare rebate freeze.

GPs can’t get on board without first being shown where they and the system are going – a finding from the Health Care Homes trials. Even GPs who don’t need much convincing will struggle to explain the model to their patients without a clear vision.

GPs and patients need to see what a future model will look like, and what’s in it for them.

Second, sufficient planning and communication are needed to get the details right and build support.

It is hard to overstate the complexity of general practice and the investment needed to build and iterate a new, better model. As previous evaluations have found, poor trial design does not self-correct: it deteriorates.

Thrid, deep engagement with patients, carers, clinicians, and practice-owners will be essential for success. And as well as consulting locally, Government should draw on international expertise.

Australia is one of the last wealthy countries to reform its general practice workforce and funding models.

This gives us a last-mover advantage. The Federal Government should use it, establishing an independent expert advisory committee of people who have worked on and learned the lessons from similar reforms overseas.

Fourth, front-line implementation support is needed to turn the vision into reality, starting with general practices that are ready for change.

Australia’s ‘fee-for-service’ funding model and workforce regulations are a profound barrier to team-based care. This means Australia has less diverse teams compared to overseas, and clinicians don’t get to work to the their full skill level.

To get the most out of multidiscplinary teams requires new ways of working – simply slotting a new workforce into a practice won’t work.

Most practices are small and change is hard for any organisation. New models of care go beyond simple tweaks to processes, and it’s easy to underestimate how hard it is. Strong support will be needed.

Practices keen to participate should be given generous change-support funding (a Health Care Home lesson), support from expert facilitators in Primary Health Networks (PHNs), and a five percent funding boost to help cover data capture and change costs. These practices should also get priority access to the $220 million of general practice infrastructure grants announced by the Federal Government.

Past trials have lasted only two years at most. This is problematic because chronic disease health gains take time to eventuate, and it doesn’t make good business sense for clinics to disrupt how they work, only for support to be withdrawn soon after.

General practices need long-term commitment to turn a new model into widespread practice. Government should stagger implementation of a new model, rolling it out over the next five years, carefully reviewing and refining along the way.

Finally, all the players need to get in the reform game.

Groups representing different health professions have often been at loggerheads. Doctors’ groups have been accused of blocking reform while hoarding patients and funding. Other groups that call for shared care have been accused of jeopardising patient safety and fragmenting care. Meanwhile, the GPs’ professional body has dismissed Primary Health Networks (PHNs), the regional bodies responsible for improving the system. And many GPs say that both the PHNs and the Deparment of Health don’t understand how their businesses work.

In reality, all these groups all have important roles to play. Particuarly in Australia’s extremely fragmented healthcare system, they need to overcome their differences and get behind a shared plan.

The Strengthening Medicare Taskforce made great strides. In just six meetings over six months, all the key players agreed on broad directions for change.

But a lot more work is needed to overcome deep divides and distrust, and to hammer out a workable plan.

Minister Butler brought key groups to the table, but now they can’t just retreat to lobbying for narrow interersts. Instead, they should push for an ongoing reform process where they can join the discussion about how to reshape the system, and mobilise their membership to be a part of it.

It’s easy to feel like real health reform might never arrive in Australia. But there are reasons to be hopeful.

While the Health Care Homes debacle was disappointing, the trials that preceded it show it is possible to reform general practice, reduce hospital demand, and improve the lives of the millions of Australians who live with chronic disease. And many other countries have already made the changes we need, showing how it can be done.

By learning from our past, and from leading practice overseas, Australia can make a new Medicare that can tackle the 21st Century challenge of chronic disease.