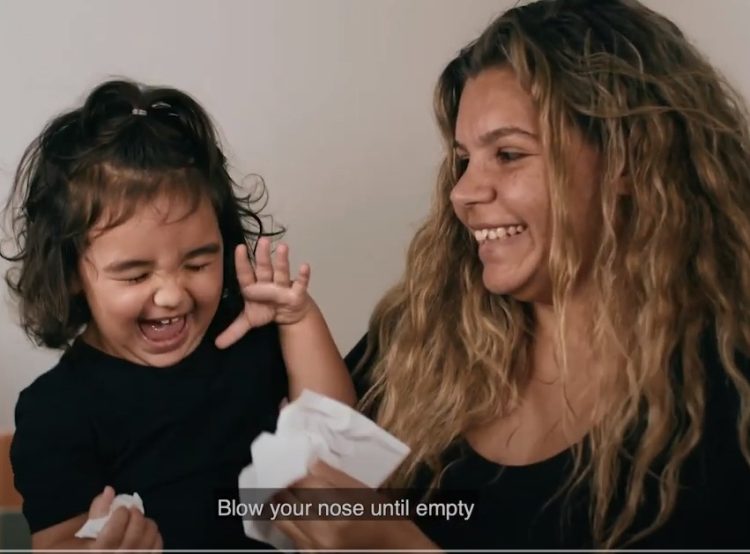 An image from ‘Milpa’s Six Steps to Stop Germs’ featuring women from the Nollamarra Football Team together with their children.

A new 30-second video promoting six simple hygiene steps was developed to reduce the incidence of trachoma, but its message may also help stop the spread of COVID-19.

The importance of face and hand washing has always been of the upmost importance in our work to prevent trachoma in remote communities across Western Australia, and it is great to see the handwashing messages appearing in mainstream arenas.

Trachoma remains a major cause of avoidable blindness and as a prevention, face and hand washing are critically important.

It is disappointing to note that Australia is the only developed country still with high levels of trachoma and almost all cases occur in our remote Aboriginal communities.

So doing what we can to ensure the right messages get out is a significant part of our project. This blog launches the #endingtrachoma project’s (Curtin University) most recent message – in partnership with West Australian Country Health Service, the Directorate of Environmental Health (WA Health) and Indigenous Eye Health (University of Melbourne).

We had a lot of fun filming a 30-second video based on Milpa’s Six Steps to Stopping Germs!

The #endingtrachoma project, which is run out of the Public Health Advocacy Institute of Western Australia (PHAIWA) at Curtin University, aims to reduce the incidence of trachoma and skin infections in ‘trachoma at risk’ Aboriginal communities in remote Western Australia through implementing environmental health strategies.

We achieve this by primarily focusing on the F and E strategies in the WHO SAFE strategy that align with hand and face washing and environmental change.

As trachoma is a communicable disease clustered within individuals and communities rather than a series of isolated cases, we know it is critically important to focus on improving home and personal hygiene, reducing overcrowding and ensuring functional bathrooms and laundries. The #endingtrachoma project is doing just that.

Developed by the Indigenous Eye Health at the University of Melbourne, with extensive input from Aboriginal community members and services in WA, SA and the NT, this message aims to encourage everyone, particularly kids, to stay healthy and strong and eliminate trachoma and other infectious diseases through following six steps.

The message is also appropriate for COVID-19 prevention. The #endingtrachoma team would like to thank Croakey for allowing us to officially launch these videos on their platform.

Featuring women from the Nollamarra Football Team together with their children, these videos reinforce these steps to stopping germs:

Onike´ Williams, one of the authors of this blog, is featured in the videos. Not only is she a great footy player but she is also an Aboriginal Environmental Health practitioner. Her heritage is the Kokatha Nations and she has cultural ties to the Far West Coast, South Australia. Onike´ and her team mates said they had plenty of fun filming the videos but also learnt a few facts along the way.

One of the other actresses, Naomi Nelson, told us that filming the advertisement showed just how important the six steps are, especially in the world we are living in today. She said “all of our mob should know the six steps and how important it is to stop the spread of all different types of viruses and illness”.

Onike´ stated that “filming the six steps to hygiene film with my footy team mates was a fun experience. It got me out of my comfort zone and more involved in the creative side of the #endingtrachoma project. I think the importance of having Aboriginal actresses in the film will help relay the message to other Aboriginal girls and women who see it that their health and hygiene matters too, and that preventable illnesses like trachoma can affect everybody regardless of gender.”

This video is free to use and we encourage its use in clinic waiting rooms, in education and health promotion programs, as part of a healthy housing project or simply to show to your friends and family. We hope you enjoy watching it as much as we enjoyed making it.

Dr Mel Stoneham leads the #endingtrachoma project at the PHAIWA, Curtin University; Onike’ Williams is Policy Officer at the Aboriginal Environmental Health Unit at the WA Department of Health; Fiona Lange is Translation Research Scholar at the Indigenous Eye Health Group at the University of Melbourne, and Scott MacKenzie is Project Officer at PHAIWA at Curtin University.