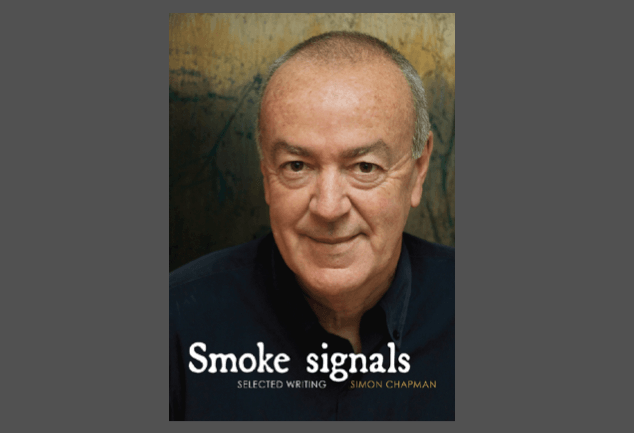 Smoke Signals – a new book not to miss

“Retirement” from his paid position at the University of Sydney has simply meant more time for writing.

His ninth book, Smoke Signals: Selected writing, will be launched tomorrow (Thursday) at the University of Sydney.

It includes 71 essays selected from hundreds of opinion page articles, blogs, commentaries and editorials written between 1983 and 2016.

In selecting the 71 pieces for this book, I chose those that I hope best illustrate a range of issues that have been important to me across my career.

Across the 40 years since my first publication, I’ve researched and written in several main areas: tobacco control, gun control, studies of how the news media report on health matters, the practice of public health advocacy, the characteristics of influential public health research and researchers, and the fascinating field of low risk but high anxiety modern health panics like mobile phones, wi-fi and particularly wind turbines.

In public health, many challenges focus on trying to animate public and political concern about agents, policies and behaviours that are true threats to health and safety.

But there are also a good many examples of the inverse situation as well: where we see people worried and anxious about “threats” that are of low or negligible risk. Here the task is one of trying to reduce that anxiety among the public and to derail it should be gain momentum and start adversely affecting evidence-based policies and peoples’ lives.

I’ve always been deeply sceptical, and being named Australian Skeptic of the Year in 2013 was one of the most cherished awards I received.

Public health issues provide a cornucopia of material where a sceptical torch quickly uncovers often poorly examined assumptions, fragile but entrenched factoids, and the corrupting spell of conflicted interests all coalescing as disciplinary orthodoxy or the dominant ways that issues are talked about.

There are two large slabs of writing in the book about two topics I’ve spent most of my work on: smoking, and more recently, exposing the bizarre world of wind farm opposition. There is a paen to the often-maligned Nanny State, including 150 ways Nanny is good for us all, and an attempt to imagine the dystopia that would unfold if the extremist libertarian Senator David Leyonhjelm was taken off the leash in his selective contempt for government regulation.

While I am often introduced as an antismoking “crusader”, I am considered a heretic by some in tobacco control, having spent years challenging certain orthodoxies that some of my colleagues embrace. Each of these are covered by essays in the book.

I quickly came to understand that the large majority of people you meet who used to smoke, quit by themselves. They didn’t need any drug to help them quit when they smoked their last cigarette. They didn’t go along to a special clinic or therapist and be walked through whatever psychological fashion dominated at the time.

In the 10 years that electronic cigarettes have been around, far more quit without vaping (or any aid) than quit with these methods. But you seldom hear about this.

I dropped an early very pungent stink bomb on this issue in the Lancet in 1985 and several more around 20 years later when I became fascinated by the resilience of the dogma that it was foolish to try and quit alone when it was clear that that was exactly how most former smokers had done it.

While I don’t like tobacco smoke, what I dislike far more is the abandonment of evidence and ethical principles in the service of a goal.

In tobacco control, we see that with the readiness that some have to ban smoking in wide open outdoor spaces like parks and beaches where there is near to zero health risks posed to others from drifting smoke and the untroubled ease with which some have embraced North Korean style censorship of films, arguing that movies should have smoking scenes removed or classified as suitable only for adult eyes.

Most of the pieces in this selection were originally published as opinion page articles in newspapers, particularly in the Sydney Morning Herald or in more recent years, on online websites like The Conversation, Crikey and ABC’s recently axed The Drum.

However, I’ve included some that I published as short or sometimes long essays in research journals, most of which are not open access and therefore generally only available to subscribers or those who have access to these through institutional subscriptions such as university libraries.

Some of these papers are long-form essays where I challenged prevailing dogmas in public health, set out the case for a new policy or tried to summarise emerging fields, like public health advocacy and e-cigarettes.

The selection starts with a reminder that we are all going to die: that death itself cannot be prevented and what considerations ought to follow from that in how we see the main tasks of public health.

I end the book with two essays about my parents’ deaths. Early pieces in the book include six on the prostate cancer screening debate, “fashionable” cancers and celebrity involvement in health causes.

Several pieces didn’t really fit well with any group, so they are sprinkled as pauses between sets about similar topics. Here, I’ve written about pain, the rescue of Stuart Diver from a landslide in the NSW ski region in 1997 and ethical questions that arose about him being paid to tell his story, and one about prominent neurosurgeon Charlie Teo allowing the public to pay to watch him operate on desperately ill patients in order to raise money for charities.

When you write pieces that are sceptical or frankly critical of issues that attract impassioned supporters, there is inevitably spirited pushback from those who disagree with you.

I’ve been a heavy Twitter user since 2009 and always promote my writing via Twitter. This often sees trolling by often-anonymous brave souls who believe that anyone with a Twitter account should be obliged to engage with them.

Like most sensible people who attract trolling, I have long instantly blocked and muted anyone who, experience tells me, has few if any interests in life than their obsession.

These include gun enthusiasts, anti-vaccination nut-jobs, electrosensitives who are convinced that they are being made ill by electro-magnetic radiation in wi-fi and wireless telephony, wind farm objectors and especially vapers, who make golf, wine and dope bores’ preoccupations look utterly mild. In one piece I explain why I don’t hesitate to block these (often anonymous) people.

Here are a few details about it and where you can order. It sells for $40 paperback or $24 e-book. You can freely access the introduction and see the full list of the 71 essays here.

For a taste, here are links to two very different essays in the collection that I particularly like:

Smoke Signals is published by Darlington Press (an imprint of Sydney University Press).

PrevPreviousHow is the NDIS re-shaping the disability sector? A call-out from researchers
NextIs a tax on sugary drinks “bonkers”?Next