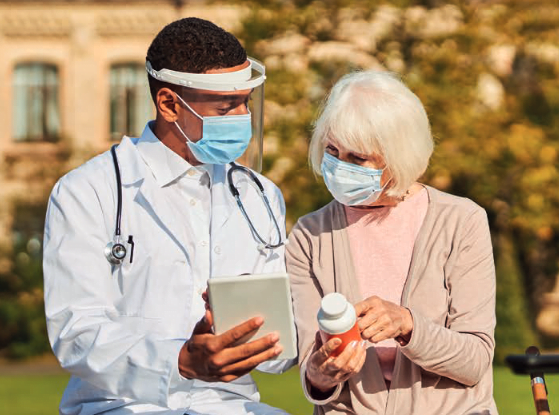 Cover of the OECD report

Introduction by Croakey: COVID‑19 contributed to a 16 percent increase in the expected number of deaths in 2020 and the first half of 2021 across Organisation for Economic Co-operation and Development (OECD) countries, according to a new report from the global body.

The OECD Health at a Glance 2021 snapshot reports that life expectancy fell in 24 of 30 countries with comparable data, with drops particularly large in the United States (‑1.6 years) and Spain (‑1.5 years).

It says that the mental health impact of the pandemic has been huge, and also had a major indirect impact on people not infected with the virus, citing how breast cancer screening fell by an average of five percentage points in 2020 compared to 2019.

Among its other key points it says:

In the post below, former senior Health Department public servant Charles Maskell-Knight looks at how the OECD reports on Australia in the snapshot.

See below for a global infographic.

On 9 November the OECD released the 2021 edition of its annual “Health at a glance” publication: a snapshot of a number of health system performance and resourcing statistics.  This year the report included a special chapter on COVID-19.

How did Australia go? If it was a school report a summary might be: “a solid student with a few special strengths, but needs to try harder in several important subjects”.

Our overall health status is pretty good. Life expectancy at birth is two years higher than the OECD average, and avoidable mortality is lower. Only 3.7 percent of us self-rate our health as poor, compared with an average 8.7 percent.

As a result of sustained government action over many years, our smoking rate is far lower than the OECD average (11 percent against 17 percent). However, our alcohol consumption is a little higher. Almost two-thirds of the adult population has a BMI greater than 25, compared with the average 56 percent.

Australia had one of the lowest rates of death due to ambient particulate matter pollution (7/100,000 population compared with an average 29), but this data is from 2019, before most of southeast Australia spent several months swathed in bushfire smoke.

While Medicare means that virtually all Australians (98 percent) are “eligible for core health services”, this does not remove financial barriers to health care.

Only 67 percent of health expenditure is “covered by compulsory prepayment”, much lower than the OECD average of 74 percent.  Put another way, one out of every three dollars spent on health in Australia comes out of people’s pockets at the time of service.

Where our system really falls down is in primary care safety and quality.

Our rate of antibiotic prescribing (defined daily dose/1000 people) at 32.2 is one of the highest in the OECD, and almost twice the average of 17.0. The age/sex standardised rate of admissions for COPD is 300 per 100,000 population, compared with the average 171.

However, mammography screening rates are only a little below average, while the 30-day death rate following acute myocardial infarction is one of the lowest in the OECD.

Before the AMA seizes on the below average hospital beds as an argument for building more, it is worth pointing out that the proportion of the population aged 65 and over (who are the main demographic using hospital beds) is also below average – 15.9 percent compared with 17.3 percent.

As we all know, Australia has avoided high mortality from COVID-19. We have one of the lowest COVID-19 death rates in the OECD, and a very low rate of excess mortality comparing the first eighteen months of the pandemic to earlier periods. The general health system still kept functioning fairly well despite the pandemic.

Despite our abysmal start to the COVID-19 vaccination program (in June Australia’s rate was the lowest in the OECD), we have made up ground strongly since then. At 1 November our vaccination rate of 65 percent of the total population was equal to the OECD average.

Does this report tell us anything we didn’t already know? Probably not.

The Commonwealth Fund report I summarised at Croakey earlier this year identified the issues of cost as a barrier to access to health services, and high rates of avoidable admissions as a sign of poor performance by the primary care system.

These are not new problems. But until we have a government that is prepared to acknowledge them, we cannot expect any action to address them.

PrevPrevious‘Building the plane while we were flying it’. Nursing on the COVID frontline
NextHow will new vaping rules affect quit smoking efforts?Next