So you want to make an app? Some helpful hints

So you want to make an app? What your organisation needs to know.

This was the topic of a workshop run at the Australian Health Promotion Association conference in Sydney earlier this week that was bound to draw interest, given that we seem to be living in the age of the app.

Below is a summary of workshop discussions. It is followed by some tweet-reports on other social media sessions at the conference.

First, some questions to consider

The future is mobile – we are told. International tech giant Apple recently celebrated 50 billion app downloads since 2007. This year the tipping point was reached seeing 50% of the Australian population with a smart phone in their pocket.

So how can health-promoting organisations, which are frequently resource constrained and in risk-averse settings, build the case for new technologies and adapt a changing technological environment?

At the AHPA 2013 conference, health promotion workers were led by specialist health promotion and technology app development and consultancy Zockmelon in a workshop to help organisations understand what is involved in creating quality and evidence-informed health promotion mobile apps.

The short answer to incorporating new technology into health promotion is that ‘some things don’t change’.

Work processes once focused on designing print materials are conceptually no different to designing software such as apps to leverage a desired outcome, except with one key difference: apps DO something.  For health promoters, this is a new way of approaching similar work around behaviour change or community engagement.

The workshop was well attended by health promotion workers, with many programs already undertaking planning in developing an app, or others just considering it as an option.

Some key lessons and questions proposed by the Zockmelon team to prospective health organisations considering pathways to app development:

Core ideas matter. The difference between failure and success is idea (generated via client and software developer) and execution. Choosing a developer who can successfully execute your concept is important but the key focus to establish before embarking on the development process is what the core idea is behind the development. Quality health promotion planning matters.

Who is the audience? Health promoters must consider who the app is for, in what ways are they using technology generally and how do they like to be engaged. Defining an audience should not only consider what the target group is in a health promotion setting but also evaluate groups that might be excluded. Are there equity considerations in using this chosen technology platform and is this being addressed in the broader program?

Where is my audience? While Apple and Android make up 90% of the smart phone market share, there is a broad array of other tablets and portable devices with different support requirements. In order to deliver a high quality user experience, apps must be designed and customised for each specific platform and device. Deciding which device and platforms to support must be based upon what is appropriate for your particular user.

What are my objectives for my audience? What is the key action this software will enable users to complete and how will it complement an overall communication and program strategy to achieve outcomes?

What is my audience’s objectives? What does the audience want from our product? Understanding the user’s need to satisfy or problem to solve is crucial to delivering an app that will actually be used. Only once the need or problem is truly identified can engagement and motivational strategies be discussed. Can they be engaged by tapping into ‘gamification’ trends such as the recent changes to LinkedIn user profiles, which appeal to the completion-ist in all of us?

How does this fit into a broader strategy? There should be consideration not just on how a developed app should be communicated and marketed to stakeholders, but also its context within a broader health promotion program.

Who is the competition? The Parent’s Jury has identified a range of food industry apps targeting children. Many of these apps are incentive-based with links back to social media. Health promotion desperately needs to engage in this space to provide alternative engaging content.

What can we learn from others? Successfully implemented campaigns such as the NSW Food Authority’s 8700 app, the Better Health Channel app, and BUPA’s FoodSwitch app are all key examples of well planned and executed apps as a part of a broader strategy. There is also evidence that in a research context, apps for collecting participant data are just as effective as traditional field research methods.

How will it be evaluated? Evaluation of your app may include both impact evaluation which can measure change in awareness as compared to any existing programs, and process evaluation for metrics such as session length and user characteristics. The latter items are often measured using app analytics which are measurement tools added into your app during development.

How can my organisation reduce the amount of development time required? Simple apps can be developed by a single developer in a matter of weeks, while highly sophisticated apps can take a team of developers many months or longer. To reduce the development costs choose a developer you are comfortable working with and make sure both parties understand the project deeply. Where possible answer the points above prior to meeting with a developer.

Do I need to own the IP? While the idea belongs to the client the developer owns the IP on the source code they develop, however this can be negotiated. What are your resources? Do you really need to own the code or is it going to be sitting around on your file drive?

Zockmelon’s workshop was able to help attendees understand that mobile apps are neither something to be feared, nor a bandwagon to jump on.

Mobile apps are another tool in a health promoter’s toolbox that needs to be understood in order to be used effectively.

• George Anderson (Communication Officer for the South Western Sydney and Sydney Local Health District Health Promotion Service) volunteered to help report on the conference for Croakey. Thanks also to Kristy Schirmer from Zockmelon(@Zockmelon) for reviewing this post.

Notes from other social media sessions 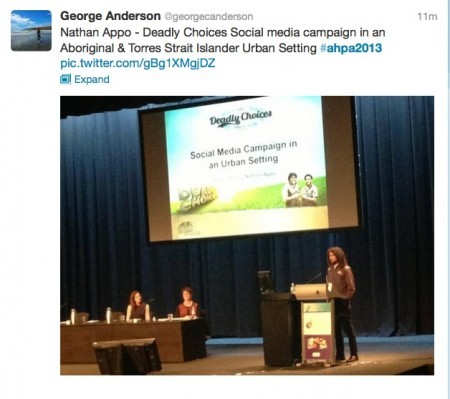 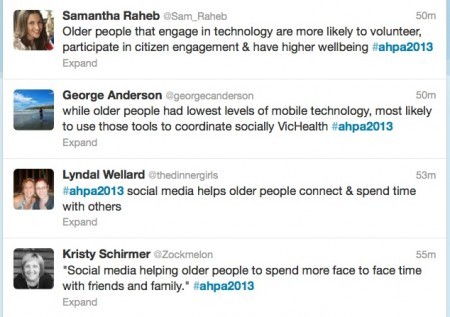 Croakey particularly liked this comment about the digital divide: an important insight.

And if any readers can help with this question on social media metrics, please share your thoughts below.

For previous coverage of #AHPA2013:

• What does it take to create healthier environments for children?

• Indigenous tweeps out in force

In collaboration with conference organisers and tweeters, the Croakey Conference Reporting Service is providing an overview of key sessions and discussions.

PrevPreviousWhat does it take to create healthier environments for children? (First, get rid of the alligators…)
NextTo give children a fair start in life, act on the evidence (it’s been around for a while…)Next