Below is the second instalment from Matthew Rodgers at AH&MRC on their successful use of social media.

Facebook is helping the Aboriginal Health and Medical Research Council of NSW spread anti-smoking messages to communities across the state.

The Aboriginal Health and Medical Research Council of NSW’s Tobacco Resistance and Control (A-TRAC) team created a Facebook page to help promote the Kick the Habit anti-smoking campaign. So far, the use of the social media site has delivered many benefits to the AH&MRC, its member ACCHSs and the communities they serve by helping to spread information about tobacco resistance and control, and encouraging Aboriginal people from communities across NSW to engage with the project. 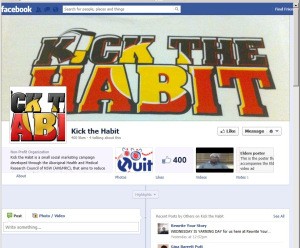 Kick the Habit is a social marketing campaign funded by the NSW Ministry of Health that involves working with Aboriginal communities to develop resources that encourage members of the community to quit smoking. It is managed by the AH&MRC’s A-TRAC Program, which has the broad goal of reducing tobacco use among Aboriginal people by integrating tobacco control and smoking cessation activities into the Aboriginal Community Controlled Health Service (ACCHS) model of comprehensive primary health care.

“There are about 50 ACCHSs in NSW and we can’t go to every community as much as we’d like, so Facebook helps us maintain relationships, connect with communities and sustain a presence, despite not being able to be there physically,” she says.

Right from Kick the Habit’s inception, social media was a key component in the social marketing campaign’s overall strategy. In 2010, the AH&MRC began Phase One of the campaign, which was a pilot program involving six communities in NSW. During Phase One, these communities worked to develop resources to increase awareness of smoking cessation options and reduce the prevalence of smoking in Aboriginal communities. After the pilot project was complete, Kick the Habit Phase Two was initiated and the program was rolled out to three communities in NSW with active participation by the local ACCHSs. A film starring local role models was made specifically for each community, and a state-wide compilation film was generated from each of the three community’s films. The communities also created a number of additional resources, including brochures, banners and posters, as well as a range of print and radio advertising materials. All of these were tied together using Facebook as a promotional tool.

“Back in 2010, when we were planning Phase One, I don’t think there were many NGOs using social media to promote campaigns, or at least not that we were aware of,” says Finlay. “There was a bit of trial and error but we took what we learnt in that pilot phase and applied that to Phase Two.”

Those lessons formed the basis for a series of social media usage guidelines created by the A-TRAC team. “We had a look at what was working and what wasn’t, and we used that to create the guidelines,” Finlay says. “It was a bit of a learning curve, but it was important that we addressed concerns about things like privacy and security, as well as established what we considered to be boundaries for acceptable use of social media.”

Chief among the issues that had to be addressed was how to moderate the site, especially with regard to dealing with inappropriate comments and other material. According to Finlay, Facebook makes it managing the site simple by allowing administrators to specify keywords that moderate posts automatically, which meant that if a user tried to post offensive material it would be blocked instantly.

“I think Facebook has gotten quite smart with security in recent years, so if people use the inbuilt security controls properly, they shouldn’t encounter significant issues.” Finlay says.

“Another good thing about Facebook is that you can approve people as they add you to their network, which allows us to reject inappropriate friend requests,” she says. “This hasn’t been a major issue for us, but you do have to be aware all the time. For example, we did have an issue with someone trying to use our page to promote a quit smoking program for financial gain, so of course we blocked them.”

Finlay says that of the many challenges associated with using social media to assist with health promotion campaigns, sourcing the right content and finding the time and resources to manage social media effectively are at the top her list.

“Social media is time consuming,” she says. “You really have to put work into the overall look and feel of your page.”

Content is another issue, both the type of material posted and the frequency with which the Facebook page is updated. “Sourcing material to put up can be quite difficult, particularly finding content that is Aboriginal-specific,” Finlay says.

“Having good content is only half the battle,” she adds . “You’ve also got to get the timing right. We found that if you posted multiple things on one day, there was too much material appearing in people’s news streams and they were ‘un-liking’ us, which was counterproductive. With Twitter it is different because people use keyword searches and don’t care if you post multiple times a day, but Facebook users seem to be much more cautious about content.”

Finlay says the A-TRAC team found it was better to provide a steady stream of content rather than post a large amount of material at one time, an issue she addressed in the AH&MRC social media guidelines. She also says there was a some of initial reluctance on the part of ACCHSs to send in content, due largely to concerns about consent. “That’s changed now, thanks to some encouragement and hard work on our part,” Finlay says.

“The guidelines also really help, because they outline with how to use the page and explain what to do and what not to do,” she says.

Consistency is also of paramount importance. “You also have to make sure that if there are multiple people acting as administrators on the account that you all use it in the same way,” Finlay says.

“That was one of the bigger challenges we faced. We had several people who were administrators and it had to have a consistent feel – it’s the Kick the Habit page, not a page for team members to express their individual personalities.”

In October 2011, Facebook created Insights, which provides measurements on a page’s performance and includes anonymous demographic data about the audience, enabling those administering the site to see how people are discovering and responding to posts. The data provided includes statistics on the reach of content (how ‘viral’ it goes), as well as breakdowns of who is using the page according to gender and region.

“As long as you have more than 30 people engaging on your page during a week, Insights can give you quite a comprehensive breakdown,” Finlay says.

“In addition to information about who is using the page, and which town or city they’re from, we’ve found the gender statistics to be particularly useful. For instance, we learnt that there are a lot more females engaging with the program than the males, some 67% as opposed to 33% for men. This kind of feedback is invaluable both for planning future campaigns and tailoring our messages to ensure we reach our target audience”

Finlay’s advice to others in the health sector who might be looking to social media to help advance their health campaigns is very straightforward: plan ahead and be prepared to put in a lot of time to make your page successful.

“Everyone involved has to be really clear on what you’re trying to achieve with social media, because there has to be a high level of consistency in the look and feel, and most importantly in your communications with people,” she says.

“Once you have established your goals, you need to understand that running the site is going to take time. Everyone must be prepared to put in the effort that’s required to make it happen.”