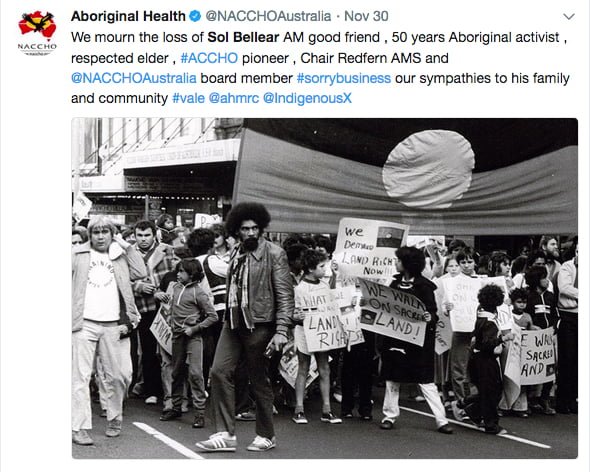 Bundjalung man and land rights legend Sol Bellear has been remembered as an “uncompromising fighter for Aboriginal rights” who had so much more to give, in tributes to his extraordinary and exceptional life.

Bellear died last week aged just 66, after a remarkable life at the forefront of Aboriginal land rights and activism. He was among those who founded the NSW Aboriginal Land Council back in 1977 and the Aboriginal Housing Company, was inaugural chair of the Aboriginal Legal Service and also headed up the Redfern Aboriginal Medical Service, as well as serving as deputy director of ATSIC. Bellear was a champion of the Aboriginal Community Controlled Health Organisation (ACCHO) movement.

He was instrumental in the land rights marches and Tent Embassy movements of the 1970s, and also worked against apartheid in South Africa, as well as on First Nations social justice issues in North America and with the US Black Panthers. He was among an Aboriginal delegation to the United Nations in 1970.

Bellear lived for rugby league, and was graded for the South Sydney Rabbitohs, also serving as club director from 2002-2006. He played several Koori Knockouts, including the first tournament in 1971. In more recent times Bellear mentored and managed Indigenous All Stars players.

The celebrated activist was made a Member of the Order of Australia for services to the Aboriginal community in 1999, and remained involved behind the scenes right up to his death on the push for constitutional recognition and a treaty in NSW.

NSW Premier Gladys Berejiklian on Monday announced that Bellear would be honoured with a state funeral:

Sol was one of Australia’s greatest Aboriginal leaders. He dedicated his whole life and energy to Aboriginal land rights and welfare, fighting for equality and improving the lives of future generations, and for that, we are very grateful to him

His family also made the following announcement:

Come join Uncle Sol Bellear in his last March in Redfern, and come join my family in celebrating the life of Uncle pic.twitter.com/0XsJyWpT6L

Below, we have collated tributes to his life and achievements. If you’d like to contribute to this post, please get in touch.

Sol, a Bundjalung man from Mullumbimby, was a relentless fighter for Aboriginal Land Rights and for justice… Sol was courageous, determined, respected, trusted and generous, with a great sense of humour. He was a fighter, a savvy political operator, skilled diplomat, mentor, a dear friend and family man.

Despite playing such a crucial role in the history of Aboriginal Land Rights and the rights movement, Sol remained humble — always focused on the unfinished business of self-determination and improving the lives of Aboriginal people.

Although he had achieved so much for Aboriginal people, Sol had so much more to give. The Land Rights Network will always remember Sol and be inspired by everything he has achieved and given, to all First Nations peoples in Australia and internationally.

As a leader, activist and sportsman, Bellear was a widely admired member of his community.

Writing in 2013, Bellear stated: “Unlike the overwhelming majority of Aboriginal people, I’ve been fortunate enough to travel the world, and in the process, I’ve witnessed firsthand the benefits of self-determination for Indigenous peoples. I’ve looked at the Sami Parliament in Europe, I’ve visited reservations in the US and Canada, and I’ve spent time in Maori communities. What I found in my travels shames our nation and makes a mockery of our fear of a ‘nation within a nation’. Dozens of treaties have been signed in the US and Canada which afford First Nations communities varying degrees of genuine self-determination, from controlling their own schooling to giving them a real capacity to generate an economic base.”

National Congress was greatly saddened today to learn of the passing of Solomon ‘Sol’ Bellear. He achieved a great deal for Aboriginal and Torres Strait Islanders during a life of active leadership. Condolences to his family and friends.

We mourn the loss of our friend Sol Bellear AM

Mr Bellear was an influential and respected elder in the Indigenous community, standing up for the rights and fighting issues on behalf of his people prominently since 1970… Sol will be remembered at South Sydney as a respected man of great principle who stood up for, and supported, his people and who had a great love for his family and his football club.

NRL CEO Todd Greenberg: Sol never lost that passion for the game and was a key figure in the success of the Koori knockout tournament. He was also a renowned mentor of young Indigenous players, many of who went on to play grade and for the Indigenous All Stars. He was a big figure in the game and he will be missed.

My game pays tribute to a great man of #NRL, Sol Bellear ❤️: a player, an administrator, a role model. Rugby league was the love of his life. Our @NRL CEO @Todd_Greenberg “He was a big figure in the game and he will be missed. The Rugby League community sends its condolences..” pic.twitter.com/SQnT3eRzwr

Sol will be remembered at South Sydney as a respected man of great principle who stood up for, and supported, his people and who had a great love for his family and his football club.https://t.co/5tiHUi7k5n#GoRabbitohs pic.twitter.com/nDrqcmW6JB

A Bundjalung man from Mullumbimby, Uncle Sol has been working for our people for over five decades since he was involved in the very first community controlled organisations that were set up in Redfern. To look at Uncle Sol’s life is to see the contemporary history of Aboriginal rights, land rights and politics.

Sol Bellear was a Director and Patron of the National Centre of Indigenous Excellence in Redfern from our beginnings in 2008 until last year. His wise words, sound advice and generosity guided the Centre throughout these years and his memory will live on in the young people who walk through our gates every day.

Mr Bellear AM was known for his efforts in land rights, social justice, self-determination and better health outcomes for First Australians

He witnessed first-hand the racism experienced by many Aboriginal and Torres Strait Islander people in the 1960s and 70s and was involved in the early years of the Tent Embassy.

In recent years, Mr Bellear focused his advocacy on improving the health of First Australians, in particular heart disease among Aboriginal men.

My thoughts and condolences are with his family, colleagues, many friends and the wider community at this sad time.

An Aboriginal man who grew up on the far north coast of NSW and a descendant of the reprehensible slave trade with connections to the Solomon Islands and Vanuatu, Sol Bellear AM was a true activist and justice warrior for First Nations people. Drawing inspiration from international black civil rights movements in North America, South Africa and the United States, Sol brought the same spirit of civil rights activism to Australia, fighting for equal rights for First Nations Australians… At a time when First Nations people were denied the same basic civil services such as access to the mainstream legal and medical system, Sol worked to ensure First Nations people had their own Aboriginal controlled services to fill the gap.

Sol Bellear AM will be remembered for his uncompromising drive for justice and for all he achieved for First Nations people in Australia and internationally.

The Aboriginal Medical Service Redfern is saddened by the unexpected passing of our long serving Chair Uncle Sol Bellear AM.

Sol was a proud Bundjalung man from far north coast of NSW. He was extremely passionate about his family, his people, Aboriginal land rights, medical services, the arts, and an avid football fanatic.

Sol was a champion of Aboriginal rights and has been heavily involved in the Redfern community for many decades. His impact on our organisation will be forever remembered and we will continue to provide health and wellbeing services in honour of his legacy and commitment to First Nations people.

The Board and staff offer our deepest condolence to the family.

Family have requested in lieu of flowers, donations can be made to the Aboriginal Medical Service Redfern via our reception (02) 9319 5823.
Donations over $2 are tax deductible.

NSW ALS chair Bunja Smith: Sol was a true warrior, dedicating his whole life to fighting for the rights of Aboriginal people. Sol’s tireless commitment to the Aboriginal community across the country was legendary and his work changed the lives of so many of our mob over the years. His travels to the US as a young man, during the time of civil rights movement, gave him a valuable international perspective that he was able to use to great effect in his unwavering activism in support of the rights of Aboriginal people across Australia.
NSW ALS CEO Lesley Turner: Sol was an inspiration and an aspiration, a real mentor and a loyal friend to us all. He was an endless source of wisdom and advice and constantly provided assistance and support to countless Aboriginal and non-Aboriginal communities throughout his life, he will never be forgotten.

We are today mourning the death of one of Australia’s most respected Aboriginal leaders, Sol Bellear, AM, who sadly passed away at his Sydney home last night. Read more here- https://t.co/Xf5sq3sAyU @nswalc #auspol

The last time I saw uncle Sol Bellear was the last Freedom ride show at Sydney University, 2015, he gave me a hug and he always felt like Family to me. Rest In Peace Unc ,your fight lives in us all , love to all his Family and Friends xx pic.twitter.com/ExE0y3XFCB

All of us at AbSec extend our sympathies to Uncle Sol Bellear’s family, friends and community. We hope his memory will inspire the next generation to keep fighting for our people. https://t.co/z4Scod7E48

Vale Sol Bellear AM. Our thoughts to his family and community at this time. https://t.co/kiiFLMEzyT

Our community has lost a trailblazer for our rights, especially when it comes to land rights and health care. Throughout his life, Sol Bellear fought tirelessly to improve the lives of our people. He was a giant among us and will be sorely missed. Vale.https://t.co/ZOh90VIVG4

Our condolences to Sol Bellear’s family, friends and community. We pay tribute to a great advocate for social justice and the driving force behind many initiatives which improved the lives of Aboriginal and Torres Strait Islander people. https://t.co/qqWKnaOz5h

Vale Sol Bellear AM. I have great memories of Sol sharing his indigenous wisdom and community achievements with visiting Canadians. He was always so hospitable, welcoming, proud and respectful. A legend. My deepest sympathies to Sol’s family & friends ❤️

He will be missed. We often spoke about the 1970s Black Power movement, dreamt of establishing a national federation of Land Councils, a Makarrata commission and of a political party and would argued if NSW was better than QLD in League. Vale Sol Bellear

I share my sadness and condolences with with the loved ones and the comrades of Sol Bellear.

I met this great warrior at the Uluru Convention. He had a presence like no other in the room. Wise, strong, kind, and humble. Vale Sol pic.twitter.com/h2KYVOtc6J

RIP to one of our warriors. A true legend of land rights and a personal inspiration of mine. Uncle Sol Bellear you will be sorely missed. https://t.co/yPXvxAqT67

“It’s all about Australia not having the balls to get up there and admit what happened [to Aboriginal and Torres Strait Islander people] in the past. They just want to forget about all of the atrocities.”

Urge you to revisit this piece about self-determination written by Sol Bellear in 2013. He died overnight. https://t.co/A2mch0C5KK … pic.twitter.com/KLOiJb2ool

PrevPreviousChanging the economic narrative: a radical need for reform
NextStark disparities by postcode on mortality and health risks, AIHW showsNext