Some 30th birthday wishes for Medicare 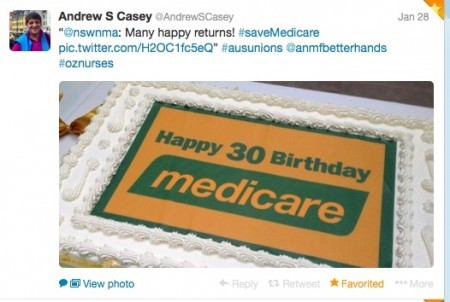 Plenty of thoughtful birthday wishes are on offer for Medicare, which officially turns 30 tomorrow (1 February).

However, as public policy analyst John Menadue points out, the origins of our national health insurance scheme can be traced back to the Whitlam Government’s 1974 passage of Medibank legislation, and before that to a seminal meeting one wintry evening in Melbourne in 1967, at the home of Dr Moss Cass.

Menadue’s historical account is worth reading, not least for this observation:

“With Cass’s assistance, we read the literature on different healthcare schemes around the world. What caught our attention were the many surveys and analyses which showed that fee-driven, private medicine resulted in excessive treatment, high costs and orientation away from preventive care. These health schemes were overwhelmingly producer- rather than consumer-driven and were inherently unstable, with suppliers of the services substantially managing the demand.”

With the enduring relevance of such concerns, it is not surprising that many are sending Medicare wishes for a birthday makeover.

Writing at The Conversation, Anne-marie Boxall, Director of the Deeble Institute for Health Policy Research at the Australian Healthcare and Hospitals Association, argues strongly for some serious structural reform.

“The role of private health insurance with respect to Medicare is one of the most fundamental.

The extent of duplicative insurance provided by private funds is almost unheard of in the rest of the world. It is a structural issue that needs to be addressed if we are to improve the efficiency and equity of our health system.”

Another related area ripe for reform is the way public and private hospitals work together, she says.

Some of these public patients are eventually treated in private hospitals on the public purse because they have waited longer than clinically necessary. The government sometimes even pays a premium for care contracted out to the private sector just so they can get it done.

Many hospital executives in the public and private sectors have told me during interviews that this situation is ludicrous; the two sectors are tripping over one another, rather than working effectively in collaboration.”

And perhaps this comment is directed to many Croakey readers and contributors:

“As funding reform options are debated in coming months, there is an onus on health experts and commentators to shift the debate away from narrowly cast discussions about financing to more productive ones about the structural problems in our health system.

If we don’t, we are unlikely to see reforms of the scale or significance of Medicare that solve pressing problems in our health system anytime soon.”

And here is a backgrounder on the history and future challenges for Medicare, by Amanda Biggs at the Parliamentary Library.

Meanwhile, a roundtable meeting was held in Canberra yesterday to celebrate the anniversary, organised by the AHHA and Menzies Centre for Health Policy at the University of Sydney.

Croakey hopes to have more coverage of this event but in the meantime. you can see the Twitter stream here and this Storify compiled by the AHHA.

And here are a few of the “take-home tweets”… 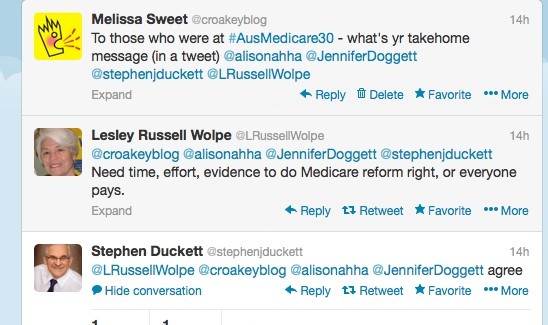