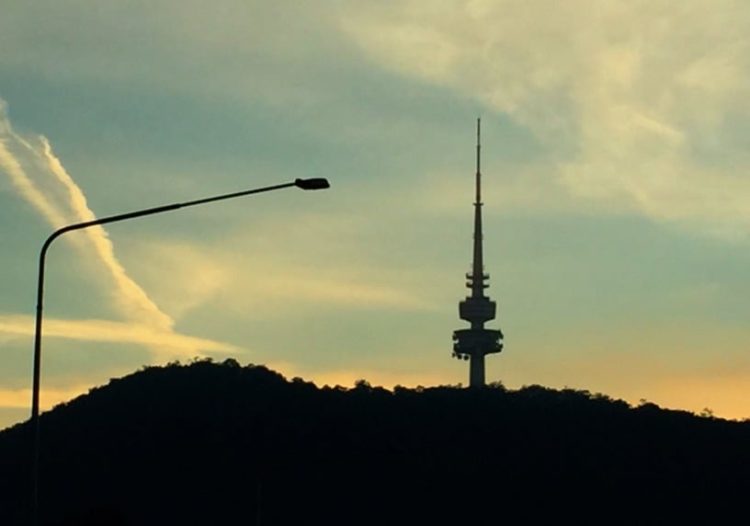 Spotlighting wider health issues that merit a focus in Canberra

The #LibSpill and subsequent Ministerial reshuffle has produced many diamonds, at least when it comes to cut-through one-liners.

There’s Alex Turnbull, a Singapore-based fund manager and son of Malcolm, who described his father’s battles against climate deniers and the coal industry’s political advocates: “My father fought the stupid and the stupid won.”

The New Daily produced this memorable opening paragraph: “Scott Morrison, Australia’s come-from-nowhere prime minister, has suffered a horrific first poll result, as he unveils a ministry with few women and plenty of coal.”

The Washington Post, in an analysis worth your time, reported: “Depending on whose count, this is the third or seventh time that an Australian prime minister has been brought down by climate issues.”

In Renew Economy, Giles Parkinson wrote that Prime Minister Morrison had appointed one of the country’s most prominent anti-wind campaigners (Angus Taylor) as energy minister, and a former mining industry lawyer as environment minister (Melissa Price), “and in doing so appeared to abandon any efforts to seek emissions reductions in the electricity sector, or anywhere else for that matter”.

About the time that the Ministerial deckchairs were being reshuffled (see the full list of Ministers here and also published in full at the end of this article), the Official Twitter account of Secretary-General of the UN, António Guterres, sent out this tweet, linked to a fact sheet on the devastating health impacts of climate change:

Climate change is a public health emergency that is expected to cause an additional 250,000 deaths every year between 2030 and 2050, according to @WHO. We need #ClimateAction now.”

Where is the leadership?

Meanwhile, David Shearman, Emeritus Professor of Medicine at Adelaide University and Honorary Secretary of Doctors for the Environment Australia, urged the new PM to call for a personal briefing by Australia’s leading climate scientists, in an eloquent and powerful article for ABC, titled Climate change is World War III, and we are leaderless.

Shearman described growing up in Britain during World War Two and the sense of a united, cohesive community where people were prepared to make sacrifices for the common good, because of leaders like Winston Churchill and Franklin D Roosevelt who could explain the need for duty and sacrifice.

By contrast, Shearman says a lack of leadership has resulted in two of the world’s highest per capita carbon emitters, the United States and Australia, deserting the trenches of “WW Three” by trading ideology for human lives and health, and failing to save the lives of their citizens by prolonging the life of polluting coal-fired power.

Mr Churchill’s stirring “We shall fight on the beaches, we shall fight on the landing grounds”, an easily understood message of WWII, has to become equally inspirational on changes in lifestyle, personal commitment to curbing rampant consumerism, energy transition, efficient recycling, modifying diet and conserving biodiversity and, ultimately, a sharing of finite resources and economic sacrifice.

These endeavours will also need to be accepted by the corporate empires that pollute and frequently enrich themselves from environmental capture and exploitation.

They must recognise that their survival also depends on climate action.”

Beyond business as usual

All of which is to provide some context to the health sector’s statements that have generally welcomed the news of Greg Hunt and Ken Wyatt being reappointed to their respective portfolios – notwithstanding disappointment about the loss of rural health as a distinct portfolio.

It’s also worth noting that Minister Wyatt’s title seems to have been tweaked so that he is now “Minister for Senior Australians and Aged Care” (rather than his previous title of “Minister for Aged Care”), while retaining Indigenous Health responsibilities.

The Consumers Health Forum of Australia also welcomed the PM’s commitment to addressing chronic diseases as a priority. CEO Leanne Wells said in a statement:

Mr Morrison is to be congratulated for putting his finger on one of Australia’s significant but often overlooked health issues.

At his first media conference after winning the leadership, Mr Morrison, when asked about his priorities, said inter alia: ‘In healthcare, I am distressed by the challenge of chronic illness in this country, and those who suffer from it.’ He also mentioned affordable medicines, aged care, and Medicare as priorities.”

It is understandable that continuity in the portfolio is welcomed, as the AMA’s president Dr Tony Bartone told ABC:

We’re at a critical juncture with the impending election. It’s going to be very difficult for anyone else to get across the raft of reviews, of submissions, of other policy initiatives.

We’re at a delicate situation with a primary care reform package, we’ve got an MBS review that’s going to wrap up towards the end of this year. We’ve got private health insurance implementations and out-of-pocket Ministerial advisory committees. Everything was wrapping to a crescendo and now someone new, potentially, has to come up at a very short period of time to get across that very difficult portfolio. It makes sense to keep the previous Minister in that role.”

At a time like this, it is understandable that health groups would seek to build relationships with the Ministers with whom they work, and to provide positive reinforcement to a PM indicating an interest in important health issues.

At least it might be understandable if we were not facing the public health emergency that is climate change.

As so many have said before, this is not time for business as usual. It is a time when the health sector should collectively put its weight into advocating for action on climate change as part of core business; not an afterthought or add-on.

It is also a time when the wider health sector should be listening closely to concerns being raised by Aboriginal and Torres Strait Islander organisations and people about the PM’s offer for Tony Abbott to be a special envoy for Indigenous Affairs.

The National Congress of Australia’s First Peoples issued a statement demanding that Morrison abandon the envoy plan, which they said was “for the sole purpose of attempting to quell the factional divides in your party”.

Let’s reflect on Mr Abbott’s history of supporting harmful, paternalistic policies relating to Aboriginal and Torres Strait Islander affairs. This is the man who systematically dismantled Aboriginal and Torres Strait Islander organisations through the Indigenous Advancement Strategy; tried to mainstream service provision; cut over $500 million from our services; attempted to silence the National Congress of Australia’s First Peoples by removing its funding; and handpicked his mates for the Indigenous Advisory Council.

Mr Abbott’s sole accomplishment was robbing our peoples of our right to self-determination.” 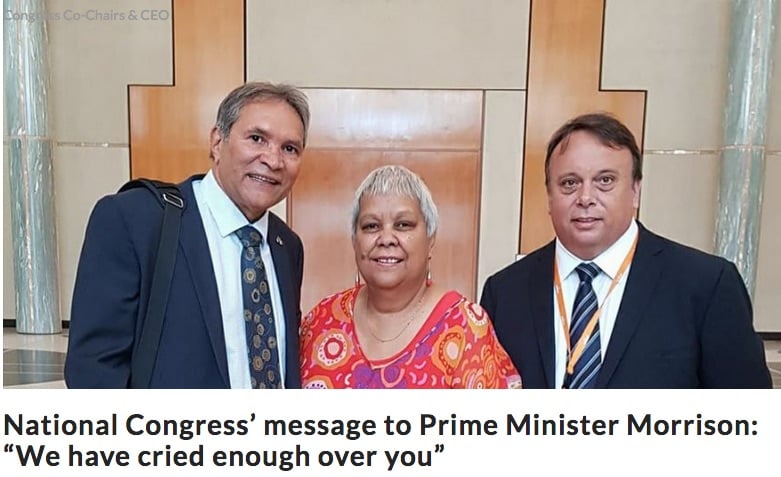 So it’s great that the AMA, RACGP et al are pleased to be working with Greg Hunt again. But hopefully they are also raising concerns with their contacts across the Government about this special envoy plan, which stinks of disrespect and political opportunism.

Hopefully they are also continuing to advocate on behalf of children who are being traumatised and harmed by detention on Nauru.

Indeed, doctors from the Royal Australasian College of Physicians today reiterated their calls for the Government to end its policies of offshore processing immediately – see their statement. 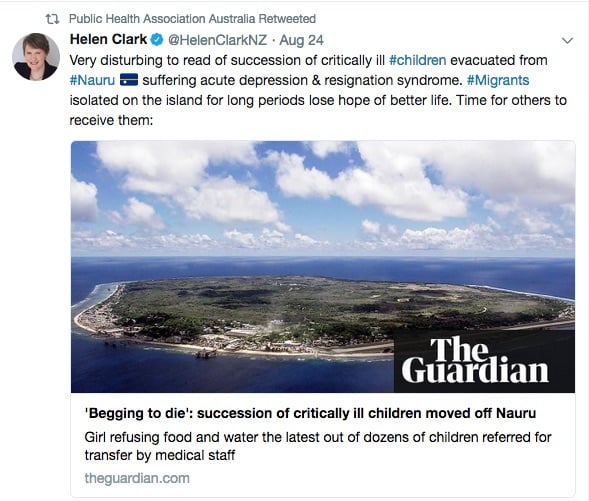 In the run-up to the next election, health groups also need to do some hard thinking about their willingness and capacity to play a greater role in stepping up against white supremacy and racism, in all their ugly forms.

Former Greens Senator Scott Ludlum has written a blistering piece for Junkee warning that “the stage is being set for a violently divisive election unlike anything many of us will have experienced”.

Will health leaders step up, on these wider determinants of health? Or will they choose to focus on narrow sectional interests?

Meanwhile, former PM Kevin Rudd also shared some diamonds this week, specifically his observations about the impact of Rupert Murdoch’s media, political and commercial agendas upon politics in Australia and more broadly.

In an SMH article titled Cancer eating the heart of Australian democracy, he wrote:

In Australia, as in America, Murdoch has campaigned for decades in support of tax cuts for the wealthy, killing action on climate change and destroying anything approximating multiculturalism.

What’s unique about Australia is Murdoch owns two-thirds of the country’s print media. No other democracy has anything approaching his effective media monopoly.”

Rudd says Murdoch has produced a cowering, fearful political culture across the country, with many politicians, business leaders, academics and journalists too frightened to take on Murdoch because they fear the repercussions.

Rudd calls for an incoming Labor government to consider a Royal Commission into the future of Australian media ownership, with particular reference to News Corp. It should also consider the proposed Nine takeover of Fairfax Media, as well as the future role of the new media, he says.

These are all matters that one would expect to be of great interest to those with a concern for public health, given the impact of a toxic media landscape on so many of the political, commercial, social and environmental determinants of health.

Let’s hope we hear more health advocacy around these and other important determinants of health in the run-up to the next election. 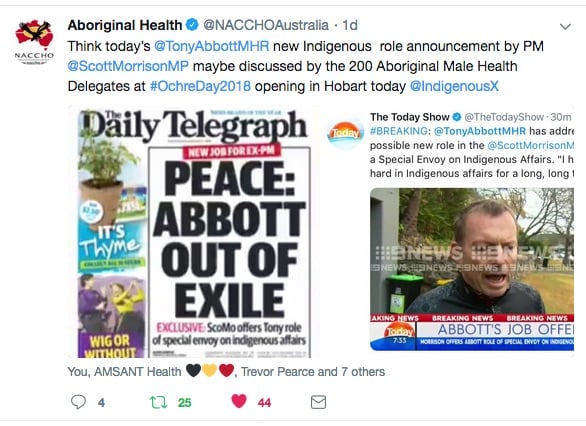 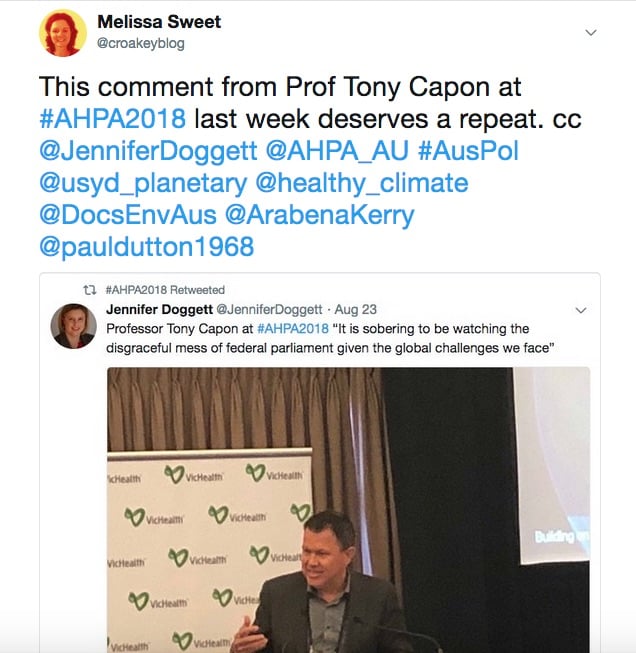 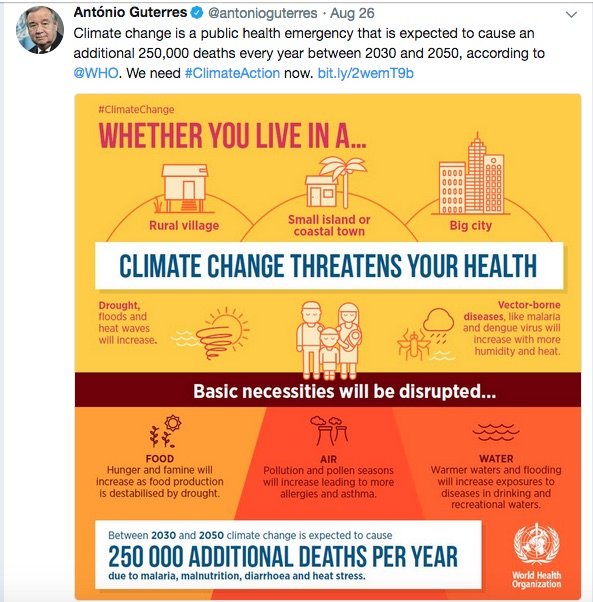 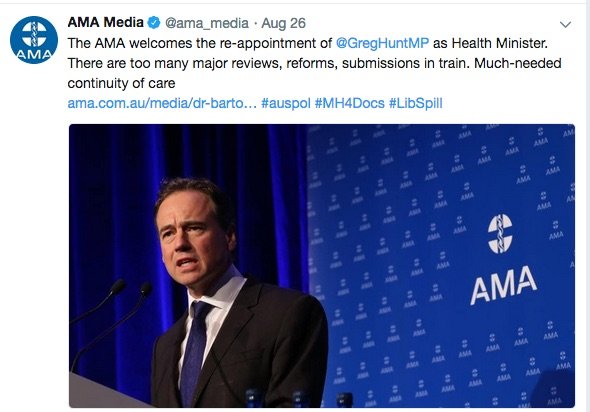 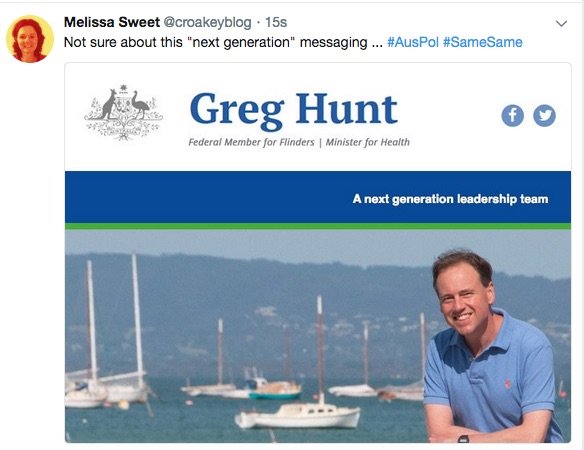 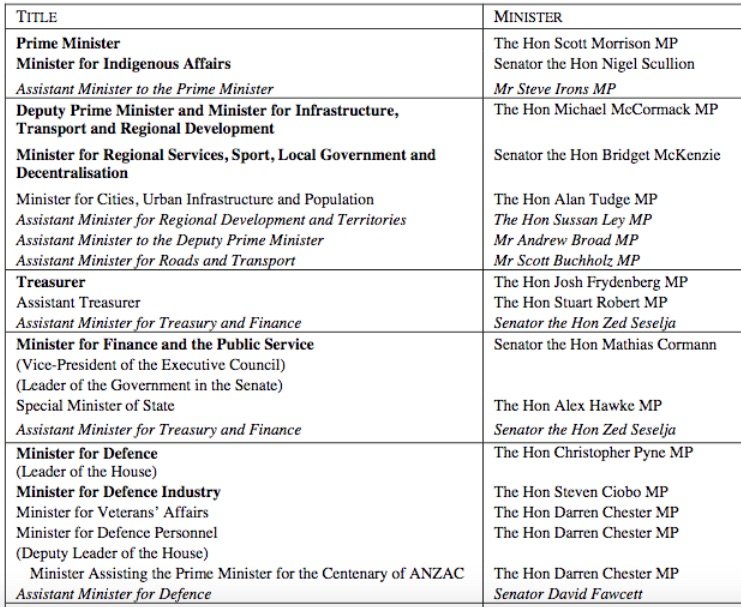 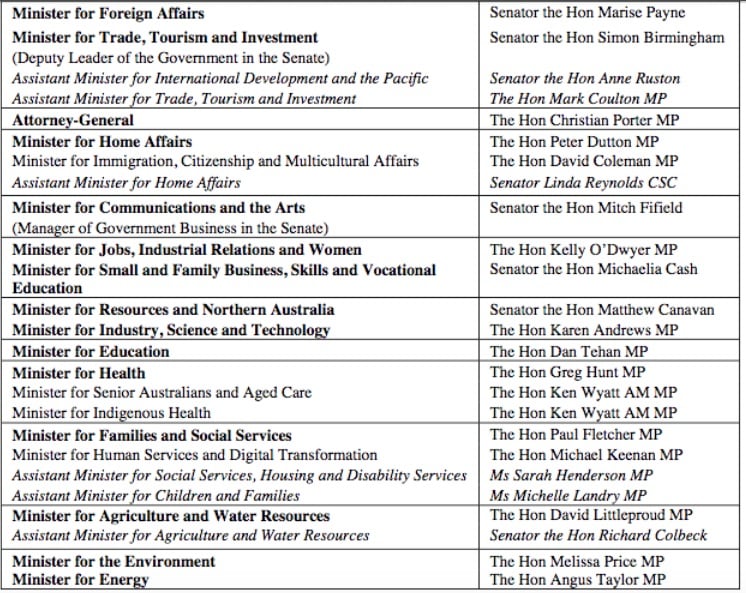 Each box represents a portfolio. Cabinet Ministers are shown in bold type. As a general rule, there is one department in each portfolio. However, there can be two Departments in one portfolio. The title of a department does not necessarily reflect the title of a minister in all cases. Assistant Ministers in italics are designated as Parliamentary Secretaries under the Ministers of State Act 1952.

PrevPreviousToo much talk of “drought”, and not enough about “water management”
NextMarking a significant milestone in the history of primary healthcare with a call for actionNext