A National Arts and Health Policy Forum in Canberra this week looks set to generate some efforts to advance the cause of the arts and health, reports Gordon Gregory, executive director of the National Rural Health Alliance.

Could the health sector make better use of the arts?

A fascinating forum was held in Parliament House, Canberra, this week on the subject of arts and health.

The political context for the Forum is encouraging. Thanks to the common interests of State, Territory and Commonwealth Ministers for both health and arts and culture, a special working group has been established to report to both groups of Ministers on how arts and health can be further developed and encouraged.

The working group is being led by South Australia, reflecting the fact that John Hill is Minister for Health (including mental health) and Minister for the Arts in that State.

The Forum, convened by the Arts and Health Foundation, was designed to provide advice from the sector to the officials Working Group. Much of that advice is now bundled in a proposal that the two groups of Ministers should sign up to a National Arts and Health Framework and Action Plan.

Among other things, this would formalise the work that needs to be done to collate and test the evidence base for the effectiveness of arts and health, and confirm the need for an audit of activities in train (who is doing what, in what area and with what resources ).

Simon Crean, Minister for the Arts, addressed the Forum and was very encouraging – including from personal experience – about the benefits that arts and health work can deliver. He made it clear that his view is that further developments in the area should be led by the health sector, reflecting the balance of resources and authority between the health and arts sectors and ministries that most people at the Forum agreed exists. 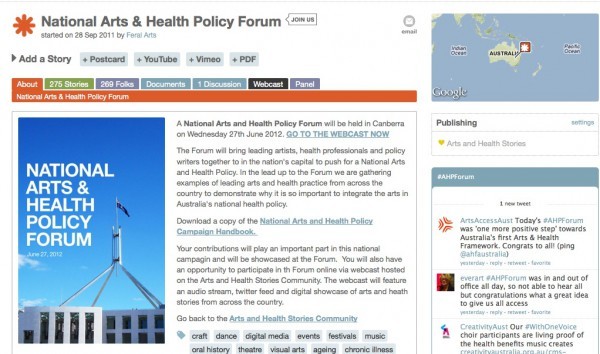 There were some fascinating discussions about precisely what ‘arts and health’ encompassses.

It was readily agreed that ‘Arts’ means art, music, literature, architecture and design, etc. And it was also relatively easy to agree that health should be deemed to be that wide construct comprised of physical, mental, social and spiritual wellbeing.

There was also an easy acceptance that arts can contribute at all stages of the health system (in health promotion and illness prevention, early intervention, primary care, in hospitals and aged care facilities) and to all population groups (those with mental health challenges, those with a disability, in rehabilitation, and as a valuable part of therapy for almost any condition).

The inclusion of health promotion and illness prevention among the areas in which arts can be effective is a reminder that arts and health is much broader than what might be termed ‘arts and illness’. There is evidence about the beneficial impact of arts on patients in hospital, for example, but there is, if you like, an even bigger ‘market’ for arts activities in health promotion: as a means of communicating health messages, as a means of helping people remain healthy, whatever their age and whatever the setting.

Notwithstanding the momentum that has built up in arts and health activities and the quite evident enthusiasm of its practitioners, at the Forum in Canberra there was still uncertainty about what exactly arts and health is.

What was clear is that arts and health has its own methods, its own agenda and its own proud territory. It is not about making health practitioners part-time artists, or artists part-time health clinicians.

The question of what arts and health is can perhaps be considered through use of comparisons or analogies. This can be done for each of the four main processes in which arts and health engage.

First, arts as health promotion could be compared with an advertising campaign about the dangers of smoking. (Except of course that advertising uses art as part of its method.) Both  are interventions which have the capacity to help and both should presumably be funded according to their effectiveness.

Arts as therapy was an implicit part of much of the day’s discussion. Some argued that people should be free to choose whatever health promotion or illness intervention they prefer.

Governments, cash strapped or not, will always limit their contributions to those which have an evidence base of efficacy. So, again, the challenge for arts and health is to demonstrate its therapeutic effectiveness as compared with a particular drug, or social work or podiatry, or complimentary medicines.

Arts as as a tool for communication is part of its role in health promotion but also has value for  what it does for  connectedness and the development of social capital. In this domain, arts needs to demonstrate its value compared with TV documentaries (or is that art?), public lectures, word-of-mouth, and various elements of the science of extension and adoption.

Finally, arts has a clear and demonstrated role to play in community development – in social and cultural change, building community capacity, in post disaster recovery. In this domain it should compete for resources and attention with such things as targeted employment creation programs, income support and – perhaps the closest parallel of all to arts and health, given its ubiquitous nature – sporting activity.

One clear message that will be of particular interest to those within the health sector is that it was suggested that health service system planners and managers should be asked at every stage, or better still should ask themselves at every stage, whether they have considered the potential role of arts in what they are trying to achieve. Slightly more contentiously, it was suggested that arts have a potential role to play in closing some of the gaps, reducing some of the fragmentation, within the health sector itself.

This is an interesting idea which, like many others canvassed at this successful Forum, should be the subject of testing through the assembly and scrutiny of an appropriate evidence base.

PrevPreviousShould this headline about the swine flu pandemic be really alarming or just a bit worrying?
NextSome recent reports on preventing suicide, and providing better support to the bereavedNext