The social determinants of health and health inequity are widely recognised in Australian health policy – but they tend to struggle to shift from noble intentions to action and are lower on the agenda in mainstream debate and political influence.

How that manifests is subject to a new study about how and why social determinants ‘do and don’t get on the agenda’ in health policy.

It’s also led to a call from the PHAA’s Mentor of the Year Professor Sharon Friel to “shift the paradigm” on public and sectoral debate, away from the mainstream media and towards more proactive approaches from researchers and public health policy makers.

Friel, Professor of Health Equity at the Australian National University, told the PHAA conference that health inequities as a social justice issue “doesn’t always sell” when it comes to policy and practice.

With a national political agenda in Australia that looks likely to operate mainly around “agency”, Friel said the public health research community could use its own agency in the following ways:

“Evidence is a determinant of health inequities,” she said. “How we ask the research question matters.”

“Should we think about health equity from a sociological perspective? A political science approach? An epidemiological approach? Should it be inter-sectoral and which sectors? We need all this but I think we need to think and work outside of the box.”

Public discourse on the social determinants of health is also vitally important, she said, citing an analysis of health-related stories in major Canadian newspapers. Of nearly 5,000 articles, only 13 per cent focused on the effect of the physical environment on health and 6 per cent on the socioeconomic effect.

York University academic Dennis Raphael posed three hypotheses for that in this interesting article: Mainstream media and the social determinants of health in Canada: is it time to call it a day? Friel summarised them as:

Raphael (who has been reported previously at Croakey) concluded that it may be “time to call it a day in regard to the mainstream media and move on to developing our own means of information dissemination and public education about the social determinants of health.”

Friel agrees that the public health community needs to think about alternate ways to get its messages across – such as this collaboration in the United States by public broadcaster PBS, California Newsreel and Vital Pictures: Unnatural Causes: Is Inequality Making Us Sick?”

New media initiatives like The Conversation and, indeed, Croakey were important developments in ensuring a greater diversity of media, she said.

So are we at least getting some traction on the social determinants of health and health inequities in Australian health policy?

In theory at least, yes, and more particularly when it comes to Aboriginal health – but “lifestyle drift” in policies also often sees noble intentions end up being simple recommendations for personal behaviour change.

There’s also continuing silence around the health effects of higher level policies in areas such as taxation, welfare, employment, trade and industry.

These are among the interim findings from new research being conducted by Colin MacDougall, Fran Baum and others at the Southgate Institute for Health, Society and Equity at Flinders University in Adelaide, and presented to the PHAA conference.

The project is about a third of the way through conducting an assessment of and developing theoretical insights on the uptake of evidence on social determinants of health in current Australian health policy.

It follows previous Southgate Institute research published earlier this year: ‘Never mind the logic, give me the numbers’ which found former Australian health ministers were aware of the existence of health inequalities and social determinants of health, but that this ‘rarely crystallised into a clear problem other than as a focus on high needs groups, especially Aboriginal people.’

That report noted there have been instances of Australian health policy which addressed the social determinants of health over the past 25 years “but they are rare and the windows of opportunity that made them possible did not stay open for long.”

Under the early stages of the latest Southgate study, thousands of strategies from health care policies in all Australian jurisdictions were examined and coded.

The good news from an interim analysis was:

What was not so positive, MacDougall said, “is that the primary health care model often drifts back to a biomedical approach and a focus on motivating individual behaviour change, despite evidence of limited effectiveness.”

He gave these examples: 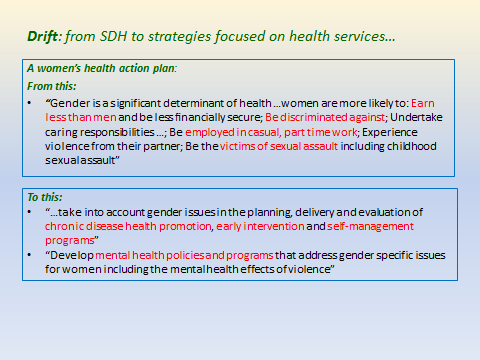 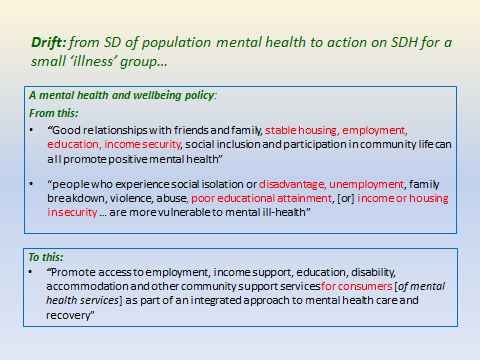 The project will next develop detailed case studies on a small number of health  policies to see how more successful objectives and strategies to address the social determinants of health emerged. It expects to report during 2014.

PrevPreviousA lesson from NZ on the hazards of punitive welfare reform
NextSomething that’s needed saying for quite some time: the health system relies on more than the “frontline” playersNext