Some pithy advice for Minister Ley, and sharp assessments of Minister Dutton 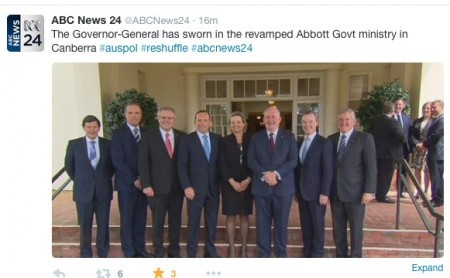 Now that we have a new Federal Health Minister, Sussan Ley, (who stands out in this picture for all the wrong reasons), what advice can we offer?

And how will Peter Dutton’s time as Health Minister be remembered?

Perhaps Minister Ley – who has promised to focus on improving the health of Aboriginal and Torres Strait Islander peoples – could consider basing policy upon evidence and a concern for health outcomes.

And it should not be too difficult for her to make a mark in the portfolio, given the record of her predecessor – “Peter who?” was a common response when Croakey contributors were asked about Dutton’s legacy.

Continue reading for some wide-ranging Ministerial advice and assessments from Croakey contributors.

Q: In one sentence, what is your advice to the new Health Minister?

Base policy on evidence not ideology. Consult and listen with your hearing ears. Scrap co-pay in any form.
Margaret Faux, a lawyer, the founder and managing director of one of the largest medical billing companies in Australia and a registered nurse. She is a research scholar at the University of Technology Sydney

Many of the outcomes in your portfolio will be determined by choices made by Treasurer Hockey and Minister Morrison — fairness is a social determinant of health.
Daniel Reeders, public health practitioner in Melbourne

The best way to reduce the health care budget is to emphasise prevention of diet-related health problems, including obesity, hypertension, type 2 diabetes, cardiovascular disease and the many types of cancer related to diet.
Dr Rosemary Stanton, nutritionist

Achieve a balance between expenditure on treatments and on prevention, which can deliver very cost effective community health outcomes.
Professor Ian Olver, Director of Sansom Institute for Health Research, University of South Australia

Quickly come to grips with the avalanche of evidence about the need for a seamless system with the emphasis on primary health care (and I use the term deliberately – not GP care and not primary care), engaging nurses, midwives and consumers.
Professor Jill White, Dean, Sydney Nursing School, University of Sydney

Consult widely, listen carefully, learn from the evidence, put people (especially patients) at the centre of every policy and program, take the long view when it comes to funds invested and outcomes achieved, and finally – be brave.
Lesley Russell, Adjunct Associate Professor, Menzies Centre for Health Policy

Health professionals and the public at large ARE your health workforce – paid and unpaid – if you engage with us, we can help.
Professor Mary Chiarella, Sydney Nursing School, University of Sydney

Learn from Medicare Locals and disseminate to Primary Health Networks; and look harder at the PBS for savings.
Prof Jon Karnon, School of Population Health, University of Adelaide

Asylum seekers must be provided with healthcare of the same standard as that offered to Australian residents.
Professor Caroline de Costa, James Cook University School of Medicine, Cairns

My advice to Sussan Ley is be the regional Health Minister her electorate wants her to be.  She has an opportunity to focus on regional and rural health as a much-needed national priority.  Whether she has the strength of character to do this in the face of all that Canberra throws up is the unknown.  Personally, I doubt she can, but I hope she can.
Rob Oakeshott, former MP

Be true to what you know as a resident of rural areas and as a strong advocate for its people.
Gordon Gregory, National Rural Health Alliance

Apply two rules of thumb: first, ask what exactly is the outcome and the degree of change in quantitative terms with which she can look the Australian public in the eye and pledge “This is a real change” and, second, require an analysis of the transactional processes or veto points that clutter the exchange of resources well before they hit the front line where they are most needed, and respectfully insist upon an implementation plan to reduce bureaucracy before further considering ANY proposal.
Jeanette Ward, Adjunct Professor, University of Ottawa, and consultant public health

Sussan Ley will need to come up to speed on mental health issues very quickly in determining the Government’s response to the major mental health review just completed by the National Mental Health Commission (NMHC).  Given most mental health programs are only funded to June 2015, there was already major concern about the need for a quick turnaround on the funding front off the back of the NMHC report. Having a new Minister complicates things but if Sussan Ley responds quickly and positively she can garner the support of the mental health sector.
Jack Heath, CEO, Sane Australia

Remember the evidence that universal health care, that is free at point of use and publicly-funded through progressive taxation, is the most efficient, cheap & effective way to good population health outcomes.
Professor Fran Baum, Flinders University

To encourage the Abbott Government to consider changes to the Medicare levy and other aspects of the taxation system to pay for increasing health costs rather quite useless one-off payments of the kind suggested by the GP co-payment.
Kate Sommerville, former Health Planner

Cancer Voices Australia commends the new Health Minister to focus on the outcome of the Senate Inquiry into Availability of new, innovative and specialist cancer drugs in Australia – due to report 26 March 2015 – as we need a better, quicker and more affordable way for Australians diagnosed with cancer to get the drugs they need.
Sally Crossing, Cancer Voices Australia

Q: In one sentence, how will Peter Dutton’s time as Health Minister be remembered?

Peter who?
Margaret Faux, a lawyer, the founder and managing director of one of the largest medical billing companies in Australia and a registered nurse. She is a research scholar at the University of Technology Sydney

Chaotic and humiliating.  Completely out of his depth.
Stephen Leeder, Emeritus Professor of Public Health and Community Medicine, Menzies Centre for Health Policy and School of Public Health, University of Sydney

Someone with little interest in the portfolio and little energy to challenge when policy changes are handed to him which run contrary to public wishes and all the local and international evidence.
Professor Jill White, University of Sydney

Peter Dutton’s time as Health Minister was “unsurprising” and “robotic”.  The kindest that can be said is that he “stayed on message”.  It is hard to find any signature item within health in the past twelve months that Dutton drove with a passion.
Rob Oakeshott, former MP

He squandered his time in opposition and so in government came unprepared to his portfolio where he ignored expert advice, evidence and public opinion to place ideology over good policy.
Lesley Russell, Adj Assoc Prof, Menzies Centre for Health Policy

Many in the sector have been reserving judgement on Minister Dutton’s performance pending the Government’s response to the NMHC review but had been encouraged by the positive noises he made about maintaining the levels of mental health funding.
Jack Heath, CEO, Sane Australia

The National Mental Health Review could be a game changer and a legacy – we await the Government’s response.
Sue Murray, Suicide Prevention Australia

The National Bowel Cancer Screening Program has been a work-progress for a decade, and Peter Dutton deserves credit as the health minister who found the funds to commit to the program’s completion.
Paul Grogan, Director, Public Policy and Advocacy, Cancer Council Australia
Adjunct Senior Lecturer, Sydney Medical School (School of Public Health), University of Sydney.

A new health productivity and performance authority that merged the functions of ACSQHC, AIHW, IHPA, NHPA, NHFB and the Administrator of the National Health Funding Pool would have released new resources for the front line.  If this happened, let’s remember and rejoice.
Jeanette Ward, Adjunct Professor, University of Ottawa, and consultant public health

The minister who ignored the evidence about the merits of universal health outcomes, and tried to privatise Medicare by opening PHNs to private companies and introducing co-payments.
Professor Fran Baum, Flinders University

Someone who played it safe & kept out of trouble.
Professor Nicholas Graves, QUT

As a time of removing traces of Gillard and Rudd, and hasty decisions.
Prof Jon Karnon, School of Population Health, University of Adelaide

And some responses from the Twitterverse

Q: In one sentence, what is your advice to the new Health Minister?

Q: In one sentence, how will Peter Dutton’s time as Health Minister be remembered?

CEO Adam Stankevicius said that Minister Ley is known for “her commitment, hard work and strong policy skills”, and said Australian health consumers would like the new Minister to deliver five Christmas presents as we head into 2015:

1. Dump the Co-pay: Regardless of whether it’s a rebate cut, a rebate freeze or a consumer co-payment, all players in the health sector recognise that a financial barrier at the point of service for primary health care will have disastrous outcomes.  It should be thrown out with the present wrapping paper.

2. Commit to eHealth: The revolutionary changes (and cost savings) possible in health care through the introduction of a robust, consumer-centred eHealth system cannot be underestimated.  Funding commitments must be made beyond 2014-15 to realise the potential of this system.

3. Engage on 6CPA: All stakeholders in community pharmacy must be given a seat at the negotiating table for the 6th Community Pharmacy Agreement.  Minister Dutton promised transparency in 6CPA, so we hope the new Minister will make this a reality for consumers, pharmacists, student pharmacists, hospital and consultant pharmacists and their representatives. The secretive, exclusionary, closed shop negotiations with the pharmacy owners union must end.

4. Involve Consumers: Consumers play an essential role in planning, managing and delivering high quality health care.  Consumer representatives and consumer organisations are actively involved across Australia in health committees/boards, debates, consultations and policy development, and their positive contribution is widely acknowledged and supported.  The trend towards greater inclusion must grow, not reduce.  This is particularly the case for Primary Health Networks.

5. Focus on Sustainability: The affordability of the health care system is a key concern for both consumers and governments.  Instead of blunt, punitive financial controls, a long-term path to better management of the MBS, PBS and state/territory health funding must be paved to ensure the sustainability of health funding. Our Better Bang for Your Buck issue of Health Voices April 2014, identified many ways to better manage health expenditure (including enhanced international cost comparisons) which could reduce unwarranted and ineffective procedures and save billions of dollars, consumer stand ready to work with the new Minister on this important issue.

• See responses from the AMA, RACGP and ANMF.

Meanwhile, for those wondering about how the priorities and style of @sussanley may differ from those of @PeterDutton_MP, perhaps their Twitter feeds give some insights… (and see also the new Minister’s record on voting for more expensive medicines). 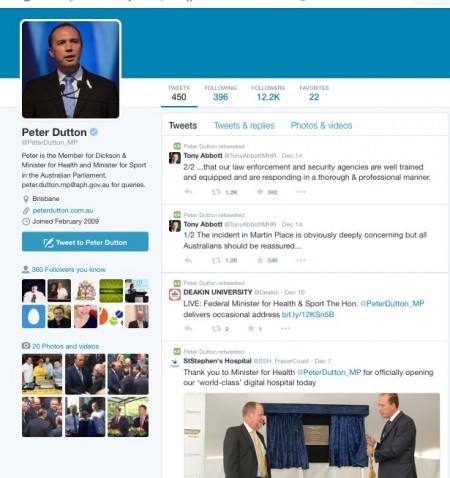 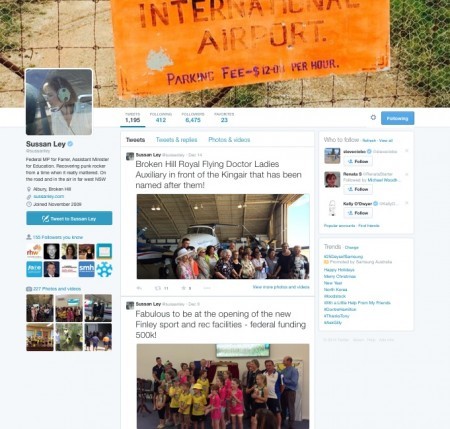