Home Healthcare and health reform cancer Some questions about cancer screening and other matters related to breasts, bowels and prostates

Some questions about cancer screening and other matters related to breasts, bowels and prostates

It’s a funny old world, rife with contradictions and inconsistencies, and perhaps nowhere more so than in the world of cancer screening and policy.

In this New York Times article, an author who has had breast cancer, Peggy Orenstein, notes that October, aka breast cancer awareness month, has been a marketing bonanza for everything from toilet paper to buckets of fried chicken as corporations have realised that “going pink made them a lot of green”.

But Orenstein says there has been a downside to destigmatization of breast cancer, with the experience of women with cancer getting lost “as acceptable narratives of coping emerged, each tied up with a pretty pink bow”.  At the same time, she says the sexing up of breast cancer has encouraged a focus away from the highest risk group, older women.

And now it is Movember, time for another feel-good campaign which may be having mixed results. Backed by a gaggle of celebrities and prominent types, including Treasurer Wayne Swan, Movember aims to raise funds and awareness for men’s health, specifically prostate cancer and depression.

I wonder how many men have had a PSA screening test as a result of Movember? More importantly, I wonder how many have been fully informed of the potential risks, benefits and uncertainties involved in having this test. I also wonder whether we are at risk of conflating men’s health with prostate health. Surely there is much more to men and their health than this?

Tonight, ABC’s Dr Norman Swan is to launch a new book which gives men and their families a much clearer picture of the complexities involved in prostate cancer screening than is available from emotive awareness raising campaigns. The book, Let sleeping dogs lie? What men should know before getting tested for prostate cancer, is freely available here.

The authors, who combine expertise in public health, epidemiology and cancer, are from the University of Sydney: Professor Simon Chapman, Associate Professor Alexandra Barratt, and  Associate Professor Martin Stockler. (Chapman also raised some questions about Movember in this recent Sydney Morning Herald article.) 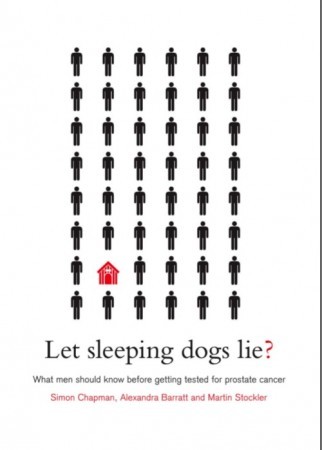 While some prominent Australian urologists are very active in talking up the importance of prostate cancer screening, few Australians would be aware that no government anywhere in the world has a formal policy supporting prostate cancer screening. Nor would they be aware that aside from some professional urological societies, no reputable cancer control or expert prevention agency anywhere in the world currently recommends screening for the disease.

The authors also reupudiate the…

facile idea that men who elect not to be tested are nothing more than unmanly “pussies” who are squeamish about having a doctor put a finger up their rectum to feel for prostate enlargement or who are just indifferent to protecting their health. This sort of trivialising focus has been a prominent part of campaigns in Australia with slogans like “Be a man!” designed to get men to be screened.

The authors say that public discussion about prostate cancer screening in Australia today is overwhelmingly dominated by pro-screening voices, many of whom have obvious vested interests in promoting widespread testing and medical intervention. They say:

…while it is almost standard for all parties to this debate to emphasise the vital importance of men being informed about the pros and cons of prostate cancer screening, attention to the “cons” has been woefully neglected or avoided by many actively promoting screening.

Where is the political will on bowel cancer?
Paul Grogan and Terry Slevin write:

When both sides of politics committed to phase in a national bowel cancer screening program in 2004, it showed that the Howard government, with its high-profile health minister Tony Abbott, and the Latham opposition, with its rising-star shadow health minister Julia Gillard, understood the extraordinary public health benefits.

So how would we have felt if we’d known that, six years and three elections later, neither a government run by Ms Gillard nor an opposition headed by Mr Abbott would have committed to a plan for implementing the program they pledged to introduce so long ago?

Perhaps we wouldn’t have believed it. As reported previously at Croakey, it’s hard to imagine any other public health program with as much potential to reduce mortality and morbidity being subject to so much delay and uncertainty.

Yet here we are, after five years of intermittent, limited screening, with no published budget funding for the continuation of the program beyond June 2011 and no plan.

The program requires annual funding in excess of $100 million, but with bowel cancer treatment costs set to exceed $1 billion per annum in 2011 – largely because of high-cost drugs for treating thousands of late-stage cancers that could literally be nipped in the bud if detected through screening – surely this is a blue-chip investment? Then there’s the incalculable gain of 30 deaths prevented each week.

On our back-of-the-envelope but nonetheless conservative estimate, a fully implemented bowel cancer screening program would cost Australia’s 11 million taxpayers less than $12 each per year. That equates to 23c each week from each taxpayer to prevent 30 Australian deaths over the same period – or less than 1c per week to save someone’s father, mother, sibling or friend from a premature bowel cancer death.

In a polity reportedly dominated by focus groups and 24-hour news grabs, taxpayers should be asked how they would feel about this use of their money. Hard to imagine anyone resenting the investment.

Today, our employer, the Cancer Council, is hosting a breakfast event in federal Parliament House to promote the benefits of bowel cancer screening to your elected representatives – in the hope of bipartisan support for a program implementation plan. With a reasonable turn-out expected, we look forward to a robust discussion.

But will the major parties commit to a plan for reducing the death and disease caused by one of the nation’s most anonymous killers?

And if not, why not?

No doubt the answers to that question have something to do the fact that evidence is only one of many drivers of policy. But do we really need a brown ribbon awareness campaign to add to the proliferation of competing disease awareness campaigns?

How healthy is a society that dedicates every other day, week or month to an illness or disease?