The IndigenousX Twitter account, as profiled at Croakey last year, has a different Aboriginal or Torres Strait Islander person tweeting each week.

The number of people following @IndigenousX has been increasing quickly (almost 10,000 at present), thanks to the efforts of the account’s indefatigable founder, Luke Pearson (in his other life an education consultant with a background in primary teaching), and his fellow tweeters.

IndigenousX supporters are currently pitching for a win at the fifth annual Shorty Awards, a US-based initiative recognising achievement in social media.

(You can read more about the history and ambitions of @IndigenousX in this online interview for the Shorty Awards website, including that the account is “to provide a safe space for Indigenous Australians to share their stories, promote excellence, network with others & to make new friends”.)

When people vote in support of @IndigenousX’s Shorty nomination, they are encouraged to tweet their reason, and the results amount to an informal evaluation of the account.

Comments to date include:

My vote was on the grounds that the account “is a plus for #Indigenoushealth and wellbeing”. I also included the hashtag for Twitter discussions about the social determinants of health (#sdoh) to indicate that I see the account fitting well within that framework.

It’s an example of how the internet enables grassroots advocacy and the coming together of communities of interest. The account has enabled people to share views on topics ranging from Australia Day to the lived experience of racism (eg see #racistlikeafox) and the political anointment of Nova Peris.

Here are a few quick thoughts on how the public health sector might learn from the experience of @IndigenousX. If you’ve other suggestions, please leave them in the comments section (or pitch a follow-on article for Croakey):

• It shows the power of rotating a Twitter account between different people. This enables greater engagement and diversity of voices. This approach is also being used by initiatives such as @WeMelbourne and @WeTasmania, both curated by online communications innovator Sarah Stokely.  (Update on Jan 29: @WeMelbourne has been profiled by The Age). If anyone knows of public health peeps doing similar, whether in Australia or elsewhere, please say.

• It reflects the value of a grassroots approach. I suspect that one of the reasons the account has taken off is that it is rooted in community rather than being a top-down approach from organisations etc. A rotated Twitter account may be a way to help public health advocates better link in to the wider community.

• It shows how Twitter can be used to build bridges, whether across geography, interests, backgrounds or communities.

• It also shows how Twitter accounts can value add to other online activities as per the connections between @IndigenousX and the Deadly Bloggers site.

• It also shows the value of engaging with initiatives like the Shorty Awards (which have more than 600,000 followers on Twitter) as a way of raising profile for an issue. I can’t see too many examples of public health doing this (though the US public health champion Michael Bloomberg did collect an award one year and is interviewed on the power of Twitter saying: “it’s a lot harder to do things with fewer words but it’s a lot more impactful.”)

Perhaps a rotated @publichealthX account could help to reduce some of the silos that can constrain public health work.

The possibilities are endless: @WeRuralHealth or @sdohX (showcasing excellence in action on the social determinants of health), for example. 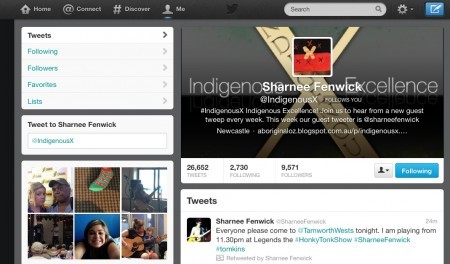 • Nominations close on February 10, 2013. (You can vote for both @Indigenous X and the #destroythejoint campaign as they are in separate categories).

And here’s some entertaining grabs from previous Shorty Awards winners, including a few snippets from Michael Bloomberg.