#SOSBlakAustralia – What’s happening in the NT? 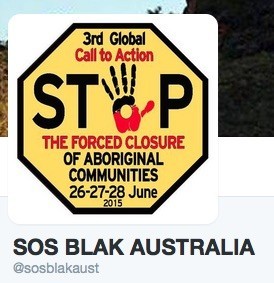 Coinciding with an #SOSBlakAustralia global call to action on June 26, 27, and 28 against threatened closures of remote communities in WA, a community forum in Darwin this weekend will hear of wide-ranging concerns facing Top End Aboriginal communities.

Towards the beginning of the year, when it came to light that Aboriginal communities in Western Australia (WA) were at risk of forced closure, a local advocacy group named ‘Community Solidarity Action NT’ formed in Darwin.

The group organised a rally to coincide with the #SOSBLAKAUSTRALIA 2nd Global Call to Action, which saw events hosted in almost 100 different locations around the world.

On the 1st of May, around 500 Northern Territory (NT) residents and campaign supporters marched through Darwin CBD to parliament house chanting a simple, yet very powerful, message.

The NT campaign had been sparked by a very strong call for solidarity from the #SOSBLAKAUSTRALIA group in the Kimberley.

The focus of the NT campaign has now, however, grounded itself right here in the Top End. The ‘Community Solidarity Action NT’ group consists of union members, Indigenous leaders and concerned community members.

The group is attempting to follow in the footsteps of #SOSBLAKAUSTRALIA campaign leaders in the Kimberley by hosting a community forum on the 27th May (details below), as part of the 3rd Global Call to Action.

The forum will provide a platform for discussion about three key topics relevant to Top End Aboriginal communities:

Aboriginal community representatives from Top End regions will be present to listen to, and participate in, these timely discussions. Some key players from a number of governmental and non-governmental organisations will be on the panel, including:

Various media outlets, including NITV, will be covering the event and we will be tweeting using the hashtags #SOSBLAKAUSTRALIA and #SOLIDARITYNT. Also look out for updates on our Facebook page, ‘Community Solidarity Action NT’.

This forum will provide a rare opportunity for community members and their leadership to hear the perspectives of Aboriginal leaders in health, justice, native title, and worker advocacy.

The Community Solidarity Action Group hopes that this opportunity will lead to broader awareness on the precarious position Government policies are putting Aboriginal peoples in and make progress towards a united position on where those policies need to be changed. 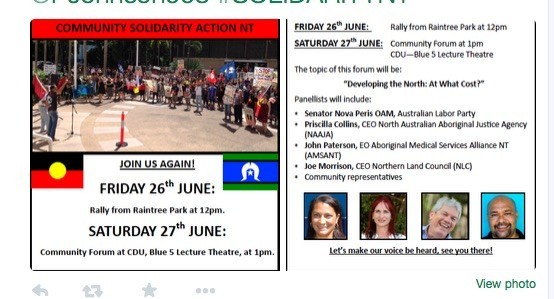 • See Croakey’s coverage of the previous #SOSBlakAustralia events, and the tweets below are from the NT march in May. 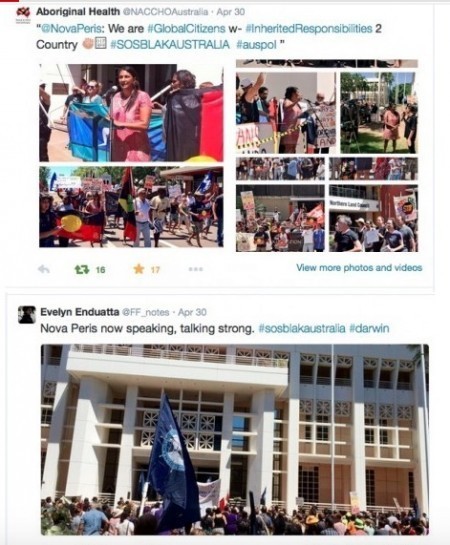