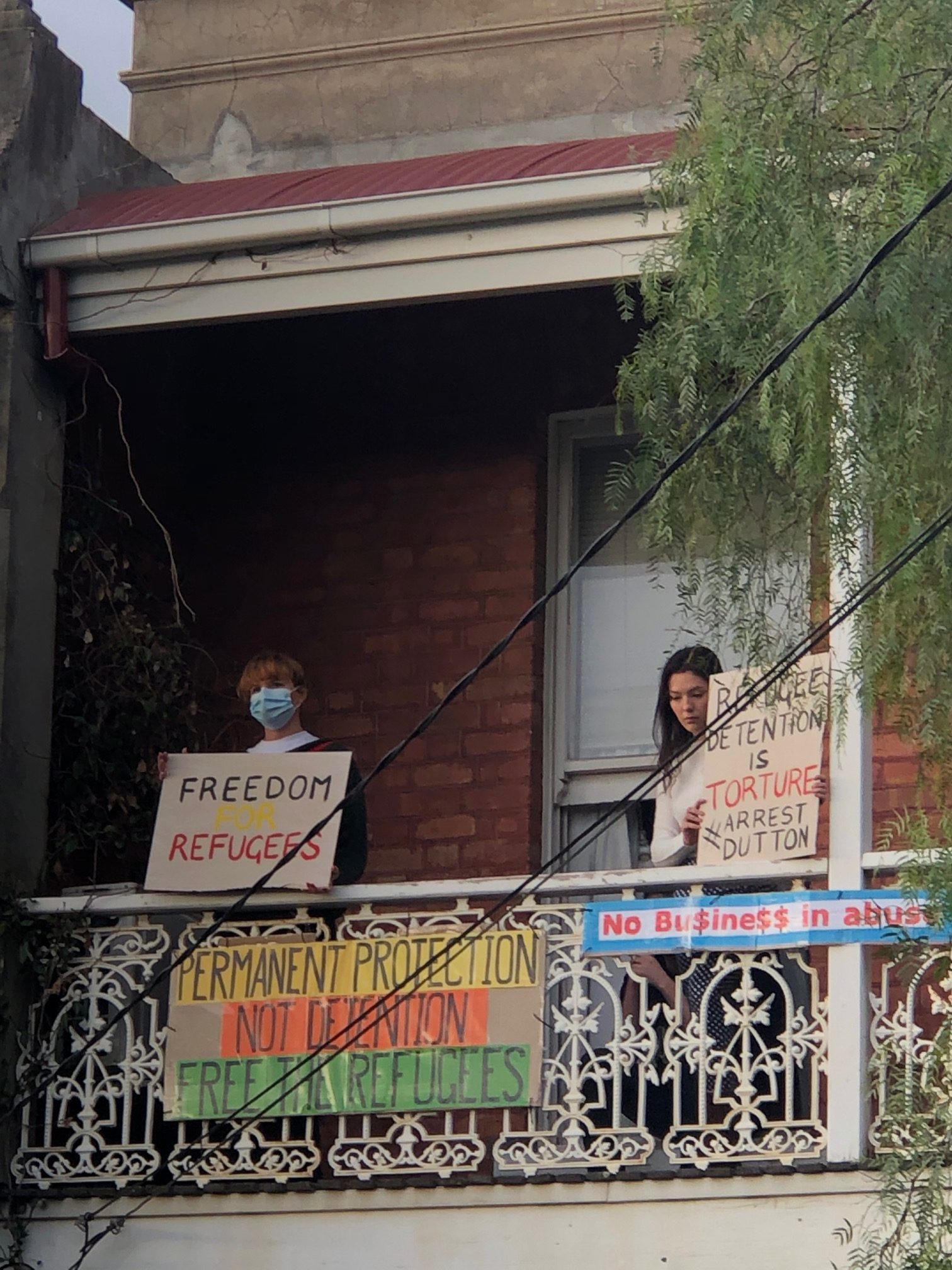 Protest outside the Mantra Bell City hotel in Melbourne’s north, where asylum seekers have been held for months. Photo by Marie McInerney

Sounding a pandemic alarm over an increase in numbers in detention

*Correction: this article and the headline was corrected on July 2 to clarify there has been an increase in numbers of people held in immigration detention facilities, not increasing numbers of asylum seekers who are held in those facilities.

The number of people held in immigration detention in Australia has risen during the novel coronavirus pandemic, despite multiple warnings from health and human rights organisations for asylum seekers to be released into the community to reduce the risk of a devastating outbreak.

Commonwealth Ombudsman Michael Manthorpe reported the rise in numbers, though not their extent, in a statement released on 1 July following an investigation by his office into how detention facilities have acted to protect detainees during the pandemic.

While the Ombudsman was “broadly satisfied” with the site-level strategies implemented to prevent and respond to COVID-19, he said it would be “highly desirable for fewer people to be held in immigration detention”, given the ongoing threat, particularly in closed facilities.

He warned there would be continuing upward pressure on numbers unless some detainees were released into the community.

The number of incoming detainees (because of visa cancellations, foreign nationals released from prison, or people identified living unlawfully in the community) has outnumbered those exiting detention because the Home Affairs Department “has been unable to facilitate the normal rate of international removals due to COVID-19”.

Further increases in numbers would make it harder for facilities to comply with official COVID-19 guidelines for correctional and detention facilities, and would “increase the [public health] risk should the COVID-19 virus occur in one of the facilities”, he said.

The Ombudsman’s investigation was undertaken as part of his duties under the Optional Protocol to the Convention against Torture and other Cruel, Inhuman and Degrading Treatment or Punishment (OPCAT), ratified by Australia in 2017.

His report came as the Australian Human Rights Commission said this week that Australia was dragging its feet on full implementation of OPCAT, despite concern about conditions and treatment of people in different detention settings, ranging from police watch houses, juvenile detention facilities, immigration detention, aged care and secure disability facilities.

(See this previous Croakey report on fears that political game-playing is putting OPCAT and the safety of detainees at risk.) 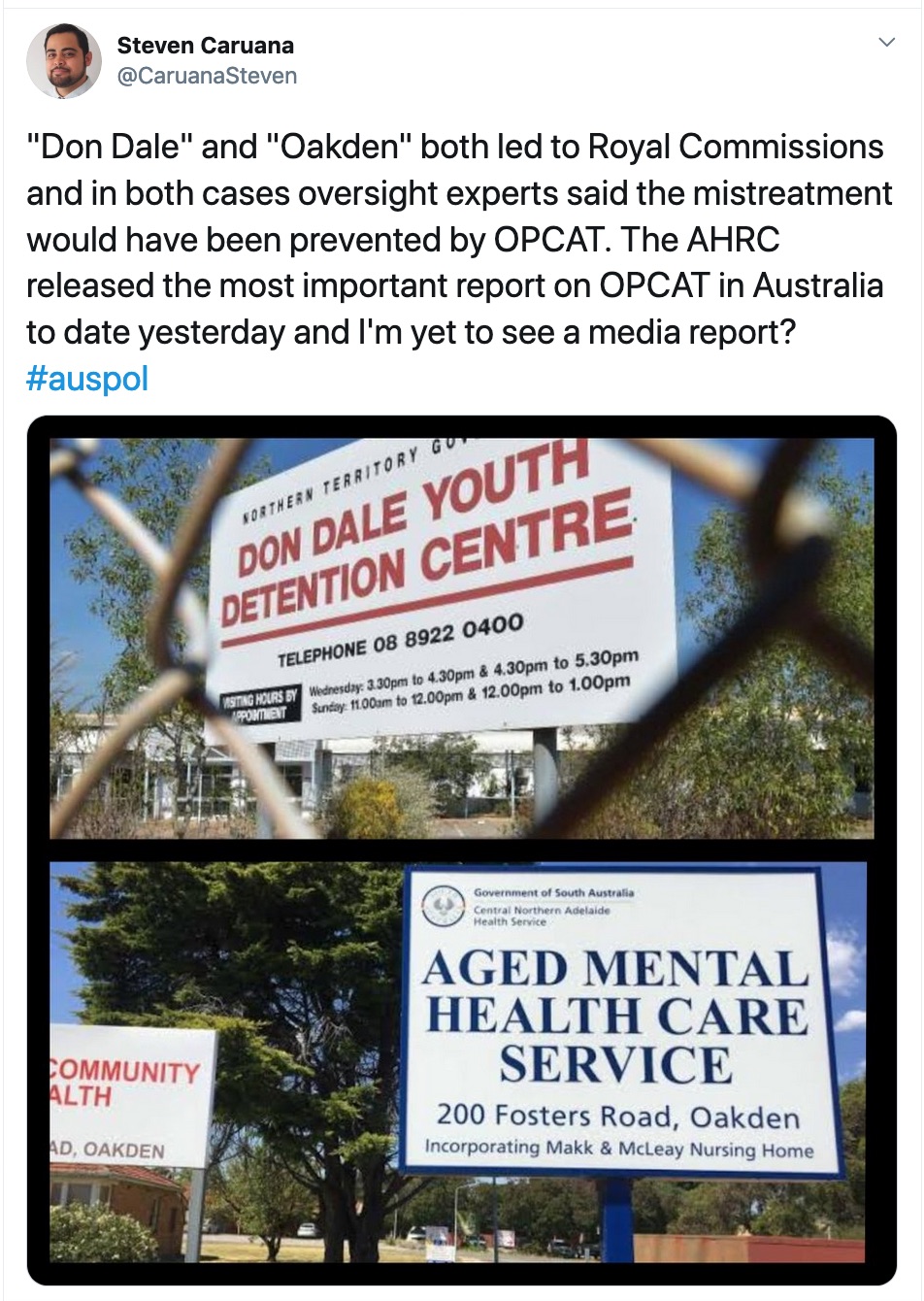 The Public Interest Advocacy Centre (PIAC), which last month filed with the Ombudsman a group complaint on behalf of 13 men held in immigration detention, said it was “staggering” that numbers in already overcrowded detention centres had gone up during the pandemic.

“This flies in the face of medical experts and practices in other closed environments,” said Jane Leibowitz, who leads PIAC’s Asylum Seeker Health Rights Project.

She warned that “even a single case could prove catastrophic for detainees, staff and the broader community”.

Concerns have grown in Melbourne this week given the Melbourne Immigration Transit Accommodation (MITA), which holds around 340 detainees, is located in Broadmeadows, one of the COVID19 hotspot zones locked back down from midnight on 1 July to try to stem an alarming spread of cases in Melbourne’s north and west.

Another 65 refugees, mostly brought to Australia for urgent health treatment from Manus Island and Nauru under the now rescinded Medevac laws, are held in crowded conditions at the Mantra Bell City in Preston, not far from other hotspot zones.

Advocates have also highlighted concerns that a significant number of Melbourne’s current wave of COVID19 cases were sparked by breaches of infection control by guards working for private security firms in the hotel quarantine program for returning overseas travellers.

“These refugees should not only be protected from the virus, but should be freed from all detention and released into the community,” Hill said.

Asylum seekers and their advocates have been mounting protests for months against the risks of their long-term detention in these facilities, alarmed by virulent outbreaks of COVID19 overseas in prisons, refugee facilities, and in migrant workers housing that sparked a second wave of the coronavirus in Singapore.

See also this previous story, by Alison Battisson from the law firm, Human Rights for All. 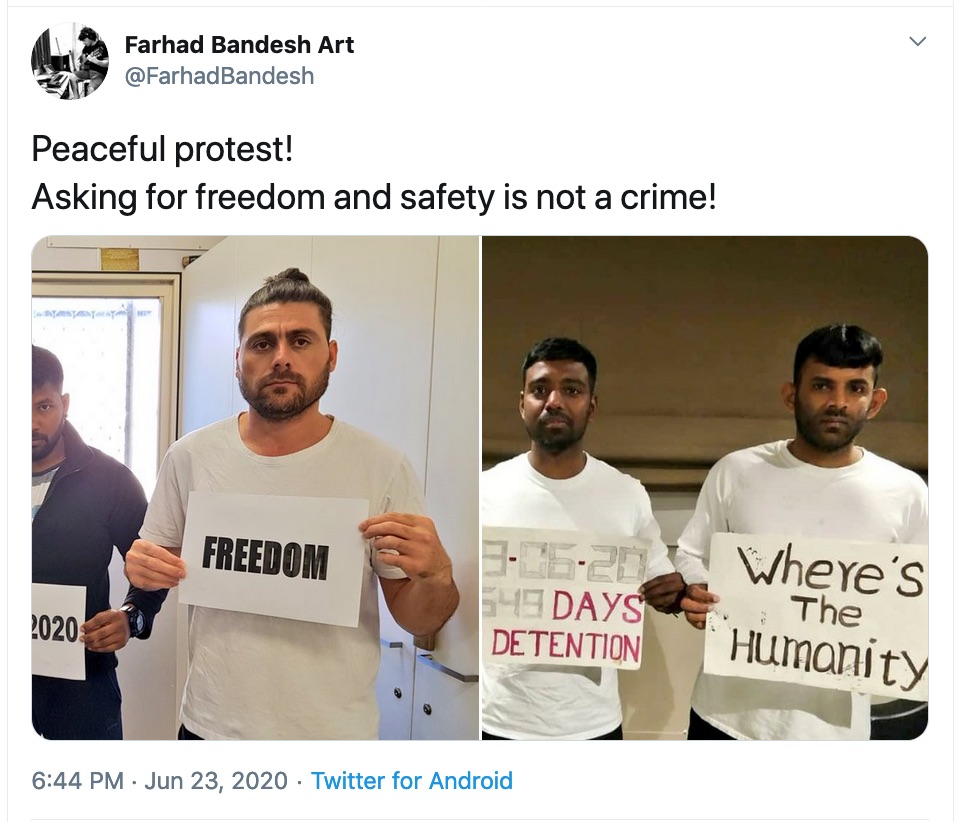 The Australasian Society for Infectious Diseases (ASID) and the Australian College of Infection Prevention and Control (ACIPC) warned in March that around 1400 asylum seekers and other non-citizens were being held across Australia in detention “in crowded conditions that would preclude adequate social distancing or self-isolation”. 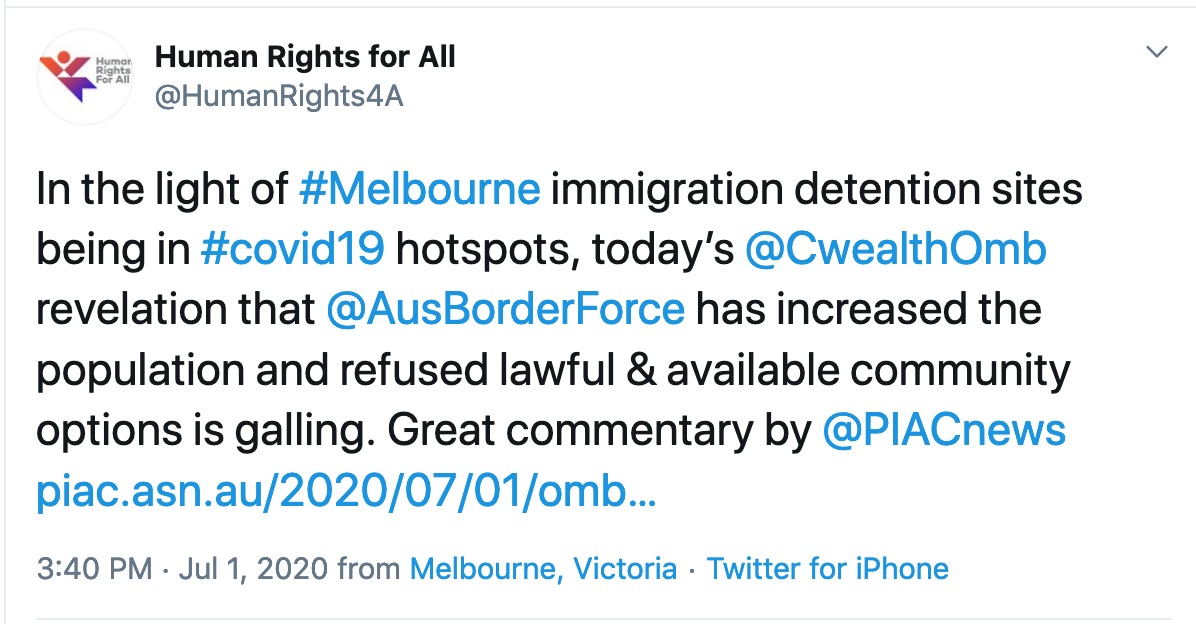 The statement said the number of incoming detainees (usually for visa cancellations, foreign nationals who have been released from prison, or people identified living unlawfully in the community) has outnumbered those exiting in recent months because of pandemic disruption to the normal rate of international removals.

The Ombudsman’s report said facilities had struggled in the early weeks of the pandemic to obtain sufficient personal protective equipment (PPE) and hand hygiene products, but now had sufficient and was continuing to increase its stockpiles.

It also welcomed screening measures in place at all facilities visited, including temperature checks for all people entering and leaving, but noted concerns that at YHIDC in Western Australia there was no oversight of people leaving, and that people leaving Villawood “were not screened unless they intended to return the next day”.

Outbreaks in other residential settings had shown that “just one [COVID-19] mishap can lead to a serious outbreak in facilities where large numbers of people are housed in close proximity to one another”, including where a person without symptoms could innocently bring the virus into a facility without their knowledge, the Ombudsman said.

He warned also of the risk of complacency as the pandemic continues, saying firm prevention measures in place today might “unintentionally weaken” if COVID-19 cases are down in the wider community or “other pressures or issues” arise.”

“All this being so, we consider that it would be highly desirable for fewer people to be held in immigration detention,” he said.

Steven Caruana, coordinator of the Australia OPCAT Network, said the Ombudsman’s report importantly takes into account the impact of overcrowding in detention – which the official COVID-19 guidelines “are silent on”.

“As [the Ombudsman] notes, adherence to the guidelines may become near impossible without the department releasing people from detention,” Caruana said.

“This is especially important now noting the surge in community transmission in Victoria has placed the Melbourne Immigration Transit Accommodation (MITA) within the postcode lockdown zone.”