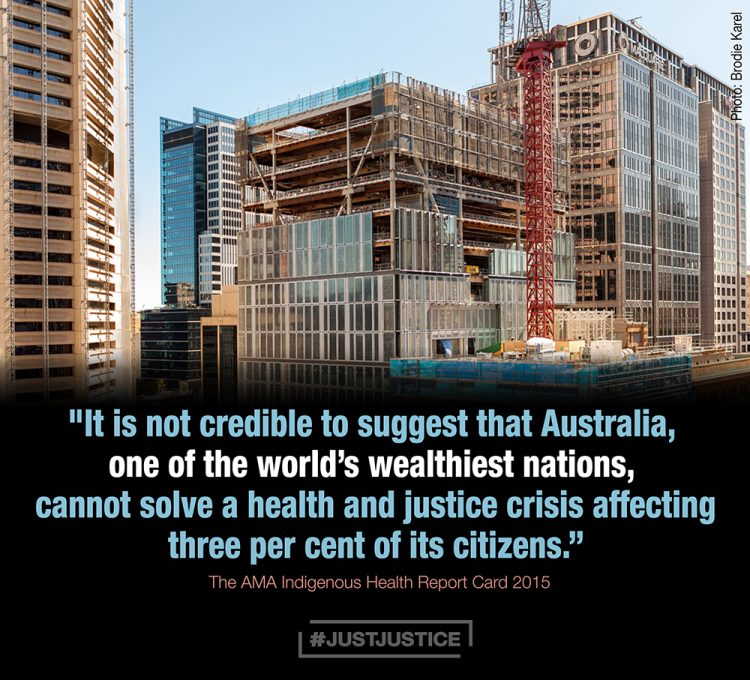 In South Australia, a growing community of people and organisations is calling for a smarter approach to criminal justice that may help to reduce crime and incarceration rates, reports Hon Dr Robyn Layton AO QC, Justice Reinvestment SA Chairperson.

Justice Reinvestment, which as previous Croakey articles have covered, involves shifting money allocated for future imprisonment costs into spending on community-based programs and services that address the underlying causes of crime in identified communities.

Justice Reinvestment SA (JRSA) is a diverse community of individuals and agencies with a shared vision of strong, safe and thriving SA communities, with less crime and lower incarceration rates, according to the group’s Aboriginal and Torres Strait Islander Spokesperson and CEO of the Aboriginal Legal Rights Movement, Cheryl Axleby.

“If properly implemented, Justice Reinvestment can reduce crime and imprisonment, improve public safety and strengthen our most disadvantaged communities, all without breaking the budget,” says Cheryl Axleby.

The Justice Reinvestment approach is based on evidence that a significant proportion of offenders come from, and return to, a small number of disadvantaged communities.

Demographic mapping is used to identify those communities that will benefit most from targeted investment in prevention, early intervention, diversionary and rehabilitation programs.

Cheryl says that Justice Reinvestment is a not a short-term, one size fits all, top-down approach.

“It requires a collaborative partnership between government and community,” she says.

Nor is Justice Reinvestment about getting rid of prisons altogether.

Helen Connolly, JRSA Board member and Australian Red Cross Executive Director (SA), says: “Prisons will always be needed to house serious and dangerous offenders. Nor is it about stripping money away from already underfunded prison services and programs.”

Why is Justice Reinvestment needed?

The continued growth of Australia’s prison population is both economically and socially unsustainable.

Over the past decade, South Australia’s prison population has grown by 50 percent and we now spend over $150 million a year on imprisonment. This growth has hit Aboriginal people the hardest.

Even though Aboriginal people make up just two percent of the State’s population, over one in five of South Australian prisoners is Aboriginal. Of the Aboriginal men aged 20 to 39 years in SA, one in 14 is incarcerated.

Adding more prison beds and imprisoning more people does not break the cycle of crime and incarceration. Again, this is particularly so for Aboriginal prisoners, who are much more likely to report multiple periods of imprisonment than non-Aboriginal prisoners.

Addressing the root causes of crime

According to Professor Mark Halsey, a criminologist at the Centre for Crime Policy and Research at Flinders University and a JRSA Executive member, the best way to reduce crime rates is to prevent crime.

He says: “When people, and particularly young people offend, there are often other issues at play like homelessness, cognitive disability, drug and alcohol use, poverty, family breakdown, discrimination and normalisation of violence.

“The more we spend on prisons, the less we have to spend on other essential services such as health and education to help prevent the causes of crime and the recidivism cycle of offenders. Today’s young offenders are too frequently tomorrow’s adult prisoners.”

Mark Halsey says that, “while the Government should be praised for its Transforming Criminal Justice approach, there is much more to be done if the prison population is to be significantly reduced”.

He says: “For example, the Government’s current interest in allowing more prisoners to serve the remainder of their sentence under home detention might make a small inroad into prisoner numbers.

“But what is needed over the longer term is a more nuanced and culturally driven understanding of why particular communities disproportionately generate crime and disadvantage. This is the value of a Justice Reinvestment approach.”

Justice Reinvestment was first implemented in the United States more than a decade ago, and has achieved real results in reducing imprisonment rates and dollars saved.

In 2007, Texas officials estimated they would need to spend $2 billion over 5 years on new prisons. Instead, they invested $241 million in alternatives such as treatment programs, improved probation and parole services, and nurse-family partnerships – generating savings of $444 million in just one year.

Five years on, crime rates continue to drop dramatically and growth in the prison population has slowed almost to a halt.

SA’s prison population is obviously different from Texas’ in scale and cost, but there is much to be learnt from the US experience.

The more recent Justice Reinvestment program implemented in New York has greater parallels with the situation facing SA. The New York initiative which focuses specifically on assisting offenders from ‘minority’ backgrounds, is making slow but steady progress into the problems of crime and poverty besetting particular communities.

Every community, whether in SA or elsewhere will differ, but the overall strategy for getting communities on track will be broadly similar.

JRSA is calling on the SA Government to trial and evaluate Justice Reinvestment pilot projects in at least one metropolitan and one regional community. These pilot projects should primarily focus on addressing the over-representation of Aboriginal young people aged 10-24 in custody.

“Focusing on Aboriginal young people is just the first step towards rolling out a comprehensive Justice Reinvestment policy across the State”, says Cheryl Axleby.

“JRSA is calling on all South Australian parliamentarians to accept that adopting evidence-based criminal justice policies is more likely to improve public safety over the long-term rather than simply increasing the number of prison beds,” she says.

Professor Mark Halsey says: “If Republicans and Democrats in the states of the United States can put aside their differences to offer bipartisan support for Justice Reinvestment, surely our South Australian politicians can do the same.”

You can read more than 65 #JustJustice articles published to date here.