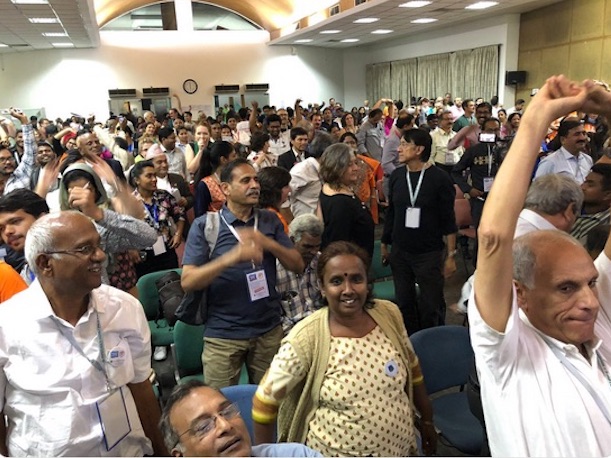 Sadly, many participants will also remember #PHA4 as their final encounter with Dr Amit Sengupta, a founding member of the People’s Health Movement (PHM), whose sudden death in the weeks following the conference has been called “a huge loss and setback to the struggle for health rights and health equity”.

Dr Albie Sharpe from the University of Technology Sydney shares his reflections from the People’s Health Assembly below. Beneath his post are #PHA4 tweets and photos.

The People’s Health Movement began at the first People’s Health Assembly (PHA) in the year 2000 – the year that the Declaration of Alma Ata’s vision of ‘health for all’ should have been realised. This past November, the fourth PHA was held in Dhaka, with some 1400 delegates attending from 73 countries. The PHA is designed to give voice to grassroots health workers, activists, and researchers.

The event contrasts with the World Health Assembly, held each May in Geneva, where health policymakers representing member states meet to map out WHO funding and policy directions for the coming year. In keeping with its people-centred focus, PHA4 was punctuated by spontaneous outbursts of singing in and outside of the sessions, and many self-organised workshops by local health groups around the world.

In her welcome to the Assembly, Flinders University Professor Fran Baum referred to the early support for the PHM by the chief architect of the Declaration of Alma Ata in 1978, Halfdan Mahler. Baum described how, in 2008, Mahler said that he “had a love affair with the PHM” and that “it was the one single movement that had been struggling to revitalise the message of Alma Ata”.

Baum referred to ongoing struggles against neoliberalism, the growing wave of fascism, global warming, and corporations, saying that “the vision of PHM for health is instead about peace, the economic and social factors that drive bad health, and about encouraging people to be empowered and live together.” Through the People’s Charter for Health, PHM “seeks to speak truth to power.” 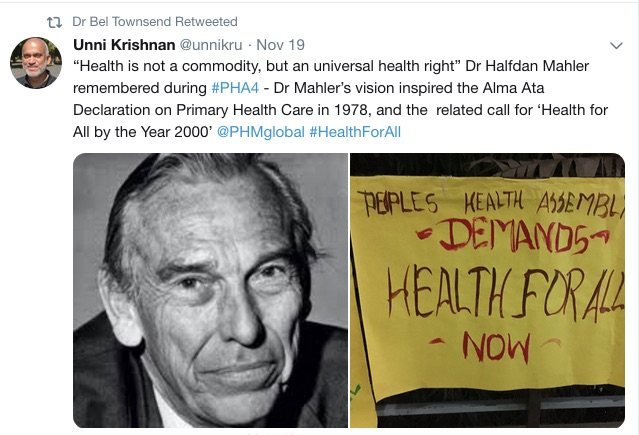 Echoing this, Dr Amit Sengupta decried the growth of global inequalities and the effects on health and wellbeing. In India, “the posterboy of neoliberal capitalism,” a large number of children go to bed hungry; yet, according to current thinking, “it is the banks that need to be saved. Money needs to be safeguarded not, lives.”

However, the last 18 years have shown that, by working together, poor activists can defeat the global pharmaceutical companies. He argued that global governance, which was supposed to be a nation-state development process, has been replaced by what is called ‘philanthro-capitalism’ where the rich provide charity to the poor and governments cede control over global health policy to billionaires.

Shortly after the Assembly, Dr Sengupta tragically passed away in a drowning accident in Goa. As one of the founding members of the PHM, and a lifelong advocate for accessible healthcare for the poor, his loss is felt deeply by many people in India and around the world. (Obituaries have since been published by The Times of India, the PHM, and there is also a video tribute.) 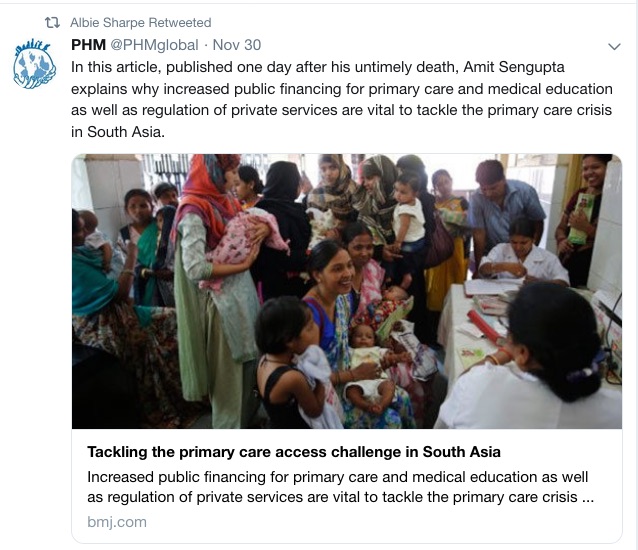 Among other goals, this PHA was aimed at evaluating and critically analysing current processes and policies that impact on health and healthcare at global, regional and local levels.

In order to enhance the capacity of health, civil society activists and researchers were called on to engage with and intervene in the policymaking process, to monitor and drive policy implementation and to ensure accountability in the functioning of health systems. In addition to working on regional issues, delegates were asked to become active in five ongoing strategic areas for health: Health Systems, Trade and Health and Access to Medicines, Gender and Health, Environment and Development, and Food and Nutrition.

In addressing the second of these strategic areas, Professor Jane Kelsey, from the University of Auckland, sounded a warning for health workers against international trade and investment agreements.

Recent trade agreements, she argued, are negotiated in secret, and “they aim to put handcuffs on governments, so that governments continue to regulate in the interests of corporations, not in the interests of people.” While new trade agreements may include some token measures around public health, there is little assurance that these will be upheld by resolution mechanisms, or accountability within the process.

The good news, Kelsey asserts, is that the current system is imploding because the corporate positions have become so outrageous.

Following an international backlash some countries – such as South Africa, Tanzania, Indonesia, India – have begun to withdraw from these agreements, saying that they will not play by these rules.

Kelsey called for concerted action by health workers and civil society to stop new deals and to ensure that existing agreements are rolled back. “Some governments are being forced no longer to be secret. We call it the Dracula principle: if you bring it into the daylight, it can wither and die.”

There was also a strong focus on the human rights and the right to health – particularly for Indigenous peoples – and the threats to health workers around the world.

Dr Lynn Redoble, a community doctor from the Philippines, described how education through community schools in Mindanao has contributed to reductions in poverty, improved literacy, and better health. With students at the schools teaching their parents how to read, the community has come to realise “how the global system has kept them and many others like them in a state of utter poverty, ignorance and desperation.”

However, teachers and local tribal leaders have been harassed by the armed forces. “When this didn’t work, they resorted to murder,” including the killing of an Italian priest and school administrators in front of hundreds of witnesses.

Philippine President Durterte himself has ordered that the schools be bombed. “This is the heavy price to pay for a people’s struggle for education and good health. For some, it was too much and they gave up, but for many the struggle continues,” said Redoble.

In the final plenary session, Professor David Sanders, Emeritus Professor at the University of Western Cape’s School of Public Health, deconstructed discussions around the recent Declaration of Astana, which was designed to reiterate and celebrate the goals of the Alma Ata Declaration.

Access to high-level discussions was largely limited to governments, international organisations, and corporate delegates, with little funding or access given to members of civil society organisations. Sanders referred to the early draft of the Astana document as “monstrous,” but the final version was much improved following concerted pushback from civil society.

Sanders was also deeply critical of the lack of focus on the social determinants of health, with huge potential for conflicts of interest by the inclusion of corporations into the process: “They are saying the private sector is going to partner to reduce commercial determinants – that’s a bit dangerous, I think.”

This PHA struck an unexpected hurdle at the last minute after the government denied approval for use of the original conference site due to upcoming elections.

Local organisers scrambled to organise an alternative site, with the help of local NGO BRAC, and reduced the length of the event by one day.

However, as Dr Sengupta said, despite the many difficulties, there were no complaints – “a people united will never be defeated.” 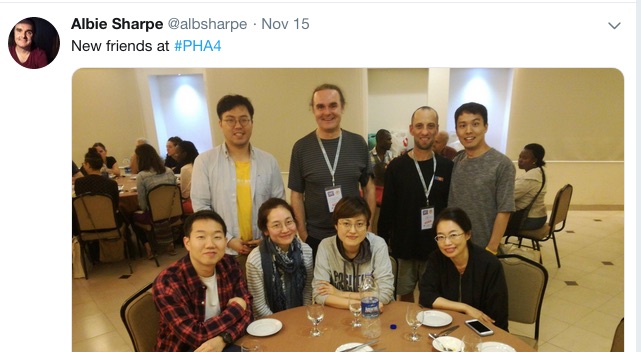 • Professor Fran Baum filed a series of articles for the BMJ, about the significance of the event, the health impacts of neoliberalism, and the health threat posed by governments’ protection of transnational corporations.

• Also watch this discussion between Baum and colleague Dr Bel Townsend, filmed by Croakey after their return to Australia, covering the impact of privatisation and trade policy on health.

• Reflections by a range of participants, on sessions ranging from occupation, military interventions, and refugees, to neoliberalism and primary health care.

• Meanwhile, the PHM has issued a call for contributions, due to conference program disruptions that caused unanticipated expenses, and also acknowledged reports of sexual harrassment at the conference. 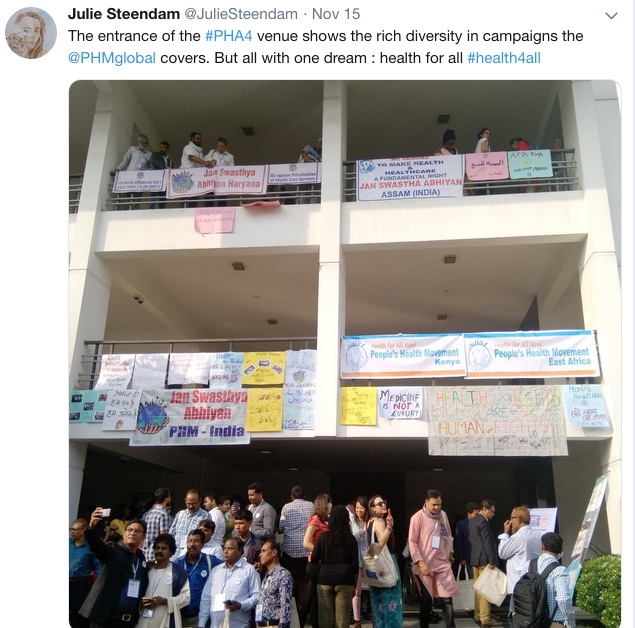 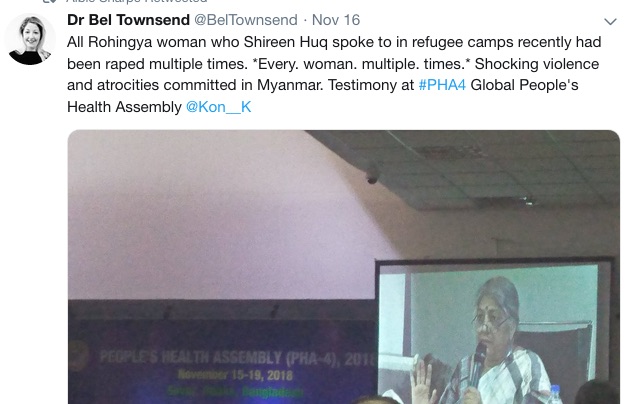 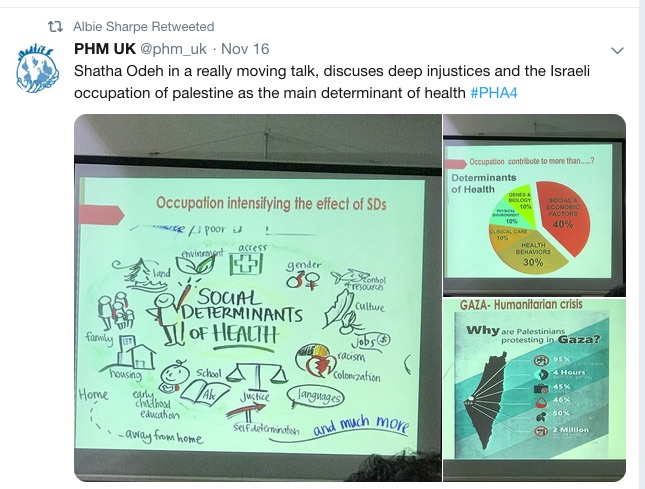 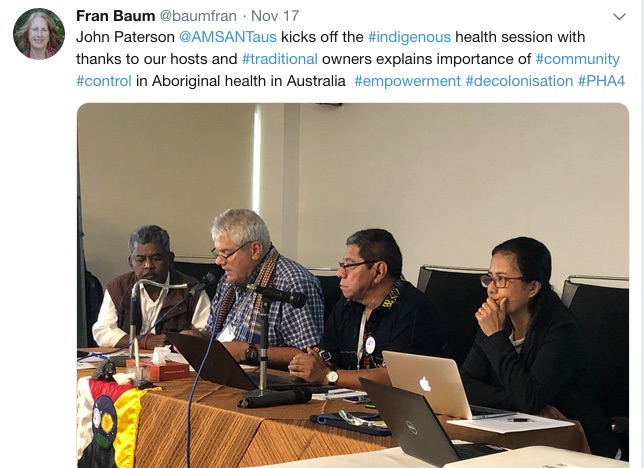 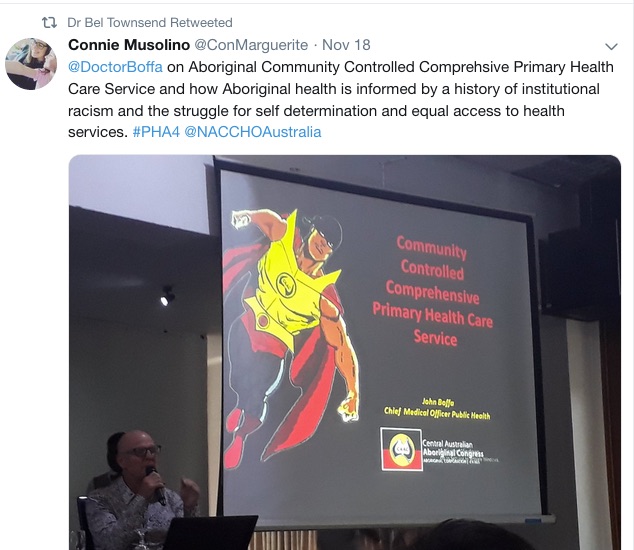 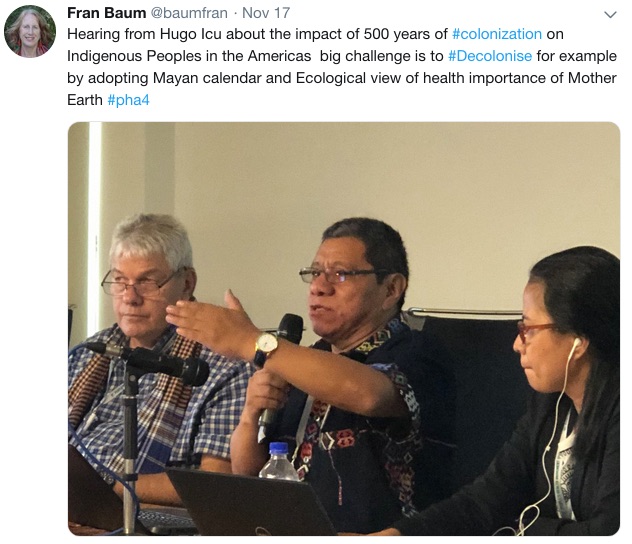 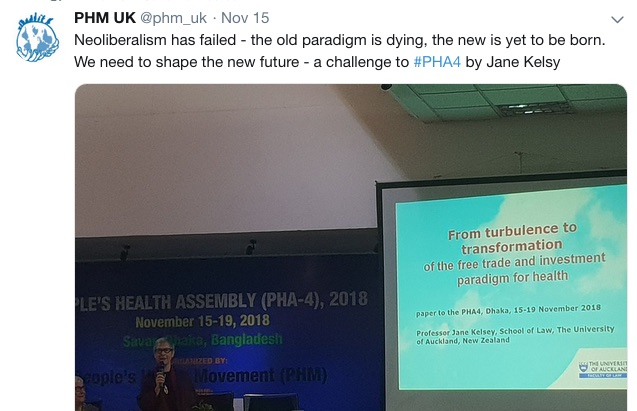 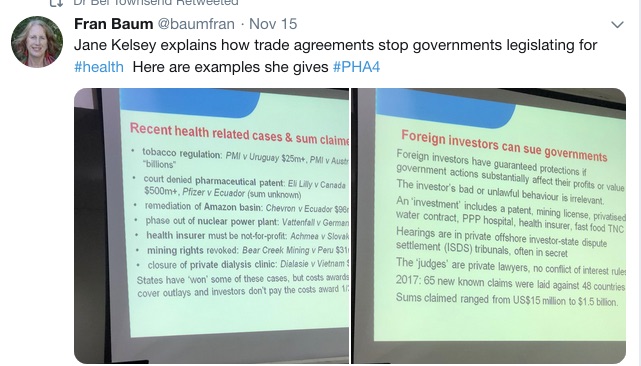 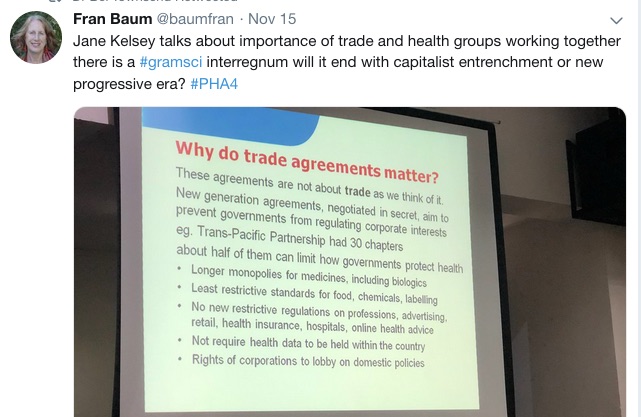 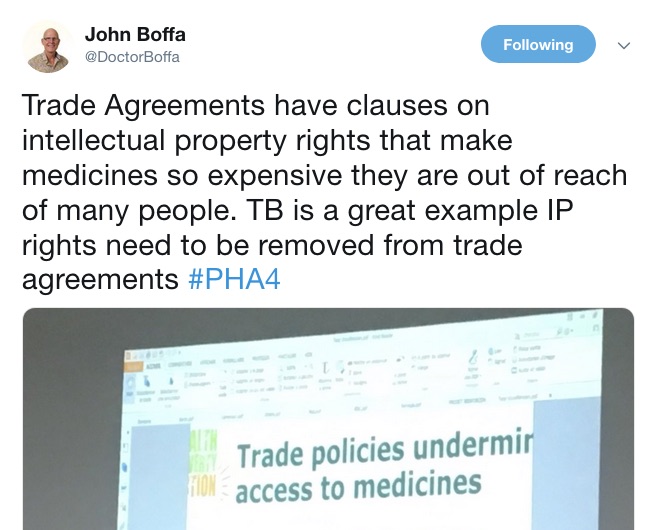 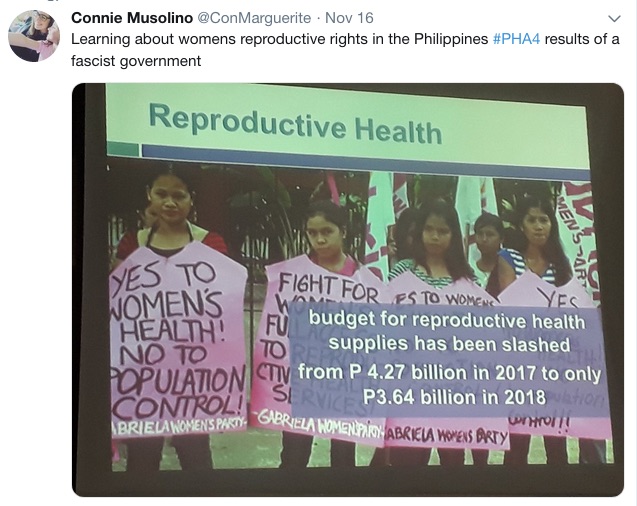 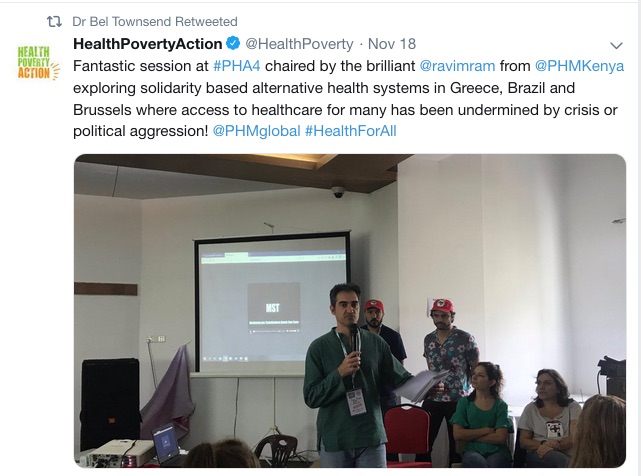 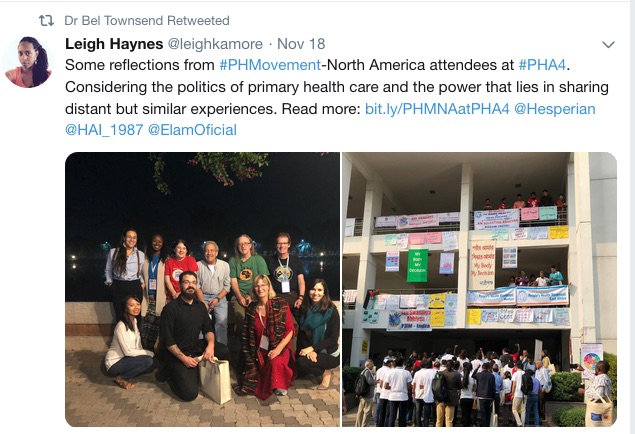 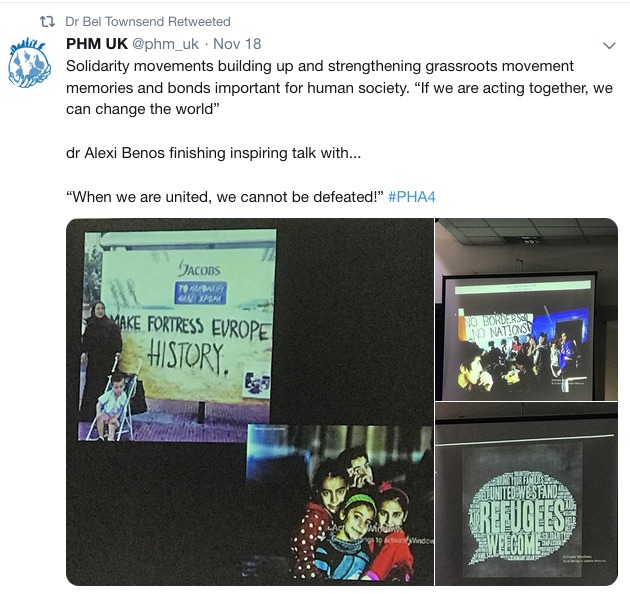 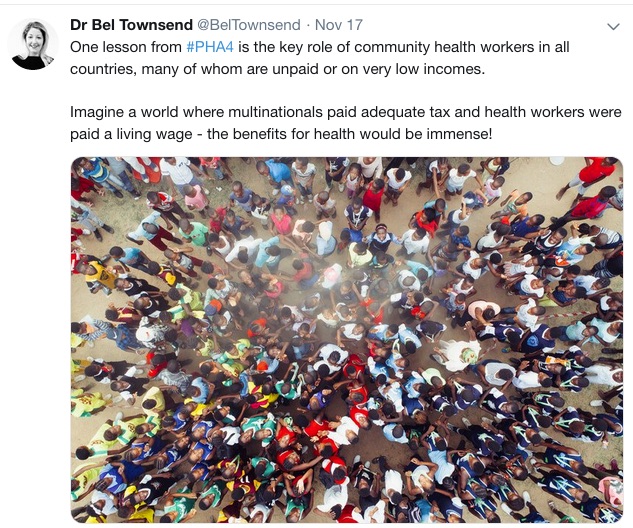 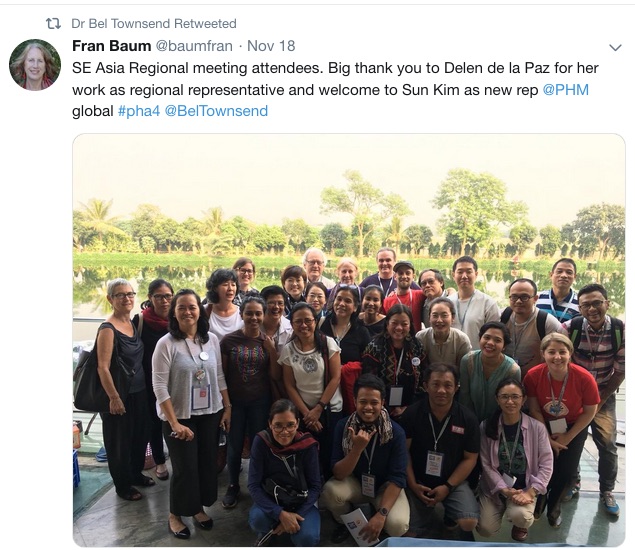 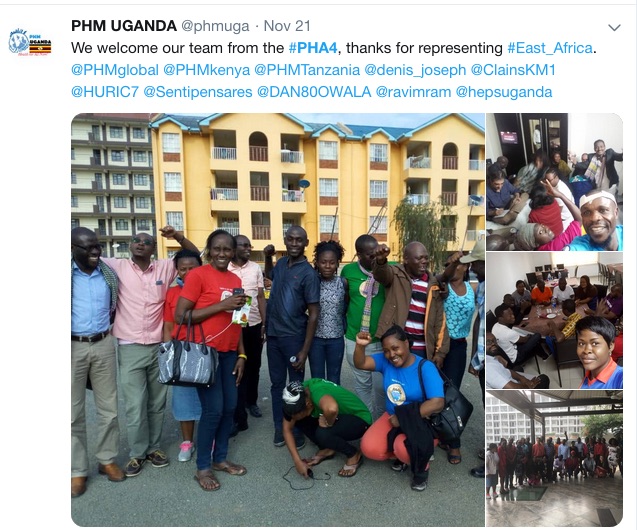 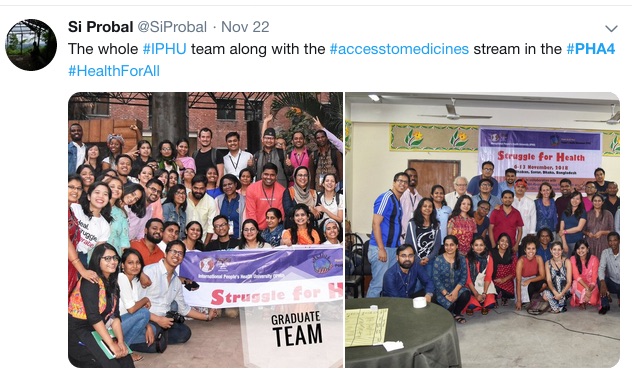 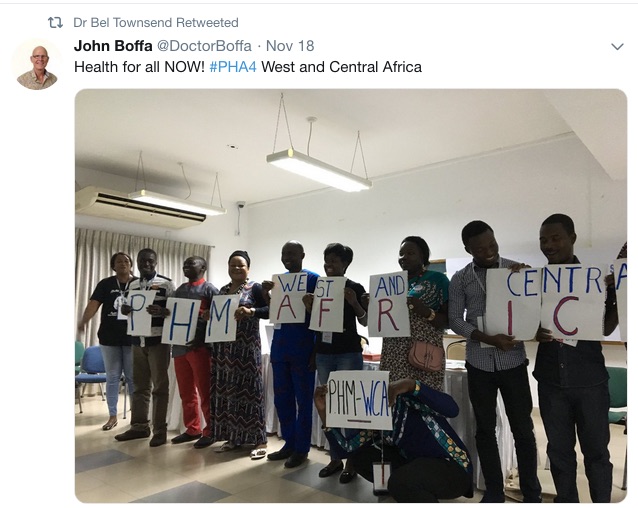 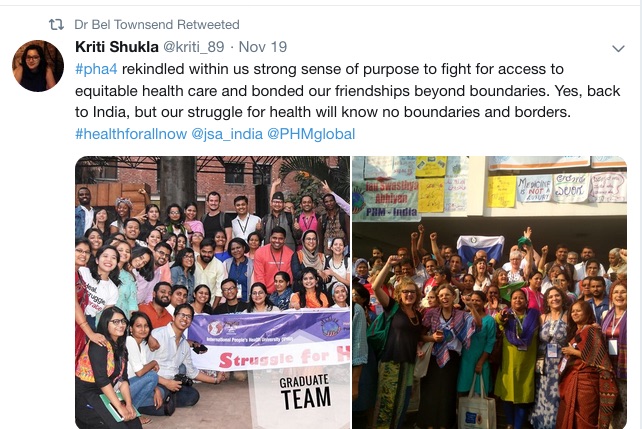 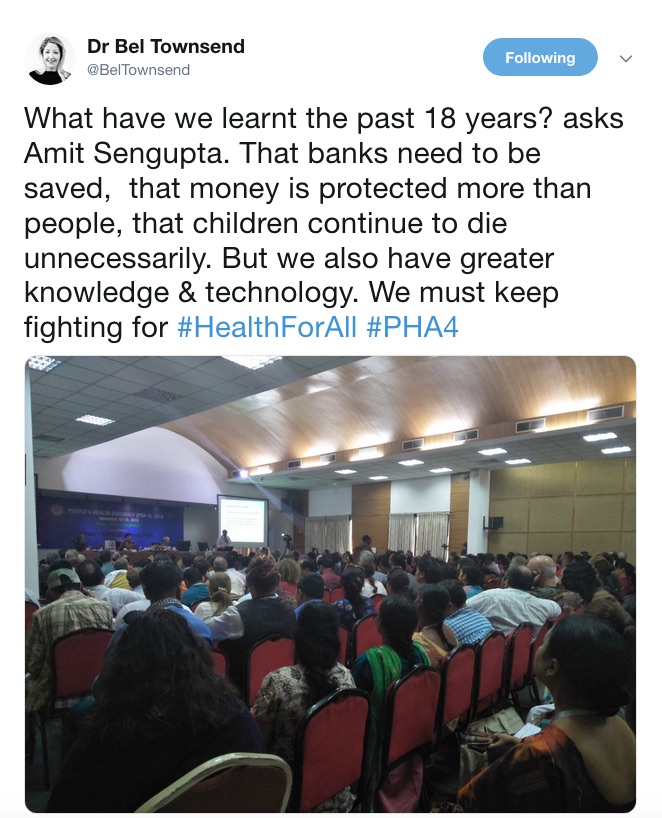 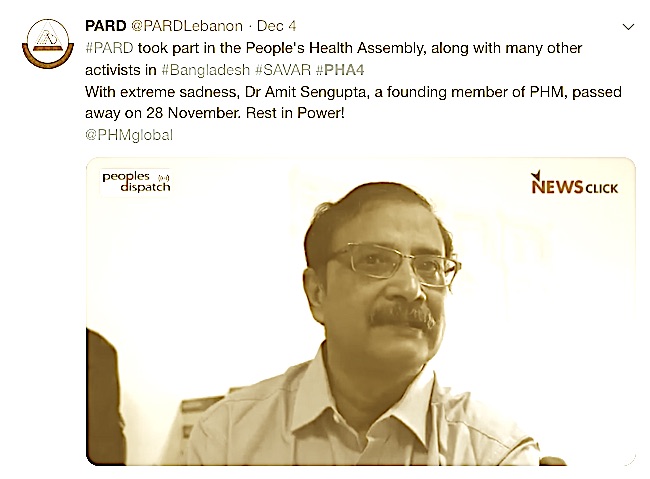 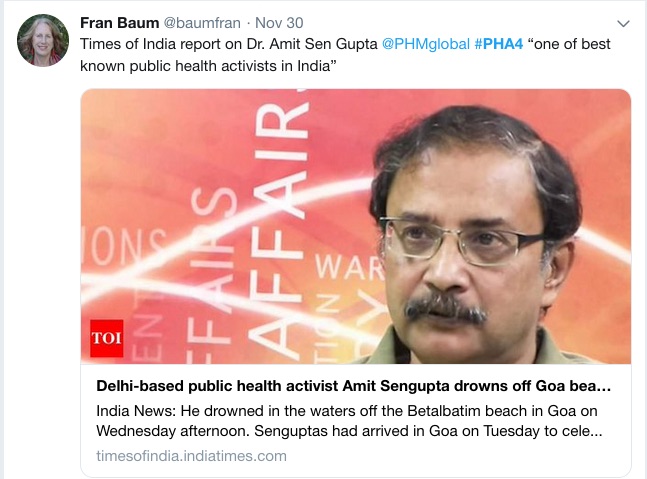 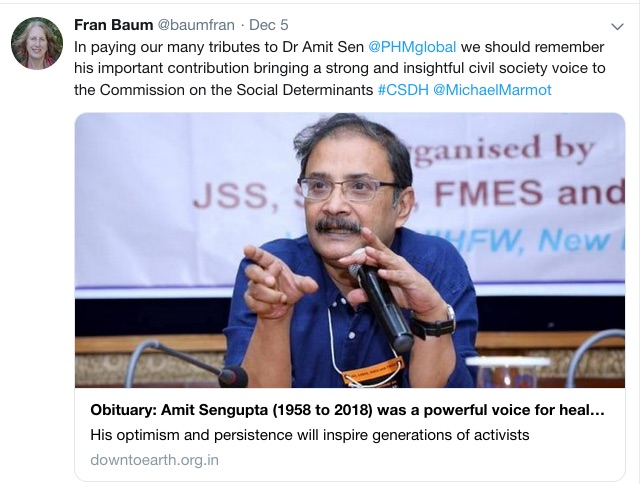 PrevPreviousA call to “shift gears” in health policy: implement the evidence and centre the public interest
NextRead all about it! Download your copy of the latest news and views from the worlds of emergency medicineNext