Australia’s largest Catholic not-for-profit health and aged care provider has spoken out to support and reassure its LGBTQI staff after senior Catholic clerics warned that Church employees who married their same-sex partner could lose their jobs.

St Vincent’s Health Australia issued a statement earlier this week to its 18,000 staff assuring all LGBTQI employees that they had its “full support”. It said:

“St Vincent’s has a long tradition of embracing diversity in our workforce. We will continue to support all our staff in whatever marriage choices they make in the future.”

The statement (published in full below) came after Fairfax media quoted Archbishop of Melbourne Denis Hart as saying Church employees were expected to uphold its teachings “totally” if marriage equality is legalised in the wake of the current postal survey.

“I would be very emphatic that our schools, our parishes exist to teach a Catholic view of marriage,” Hart said in the report. “Any words or actions which work contrary to that would be viewed very seriously.”

The Catholic Church is a major employer in Australia, not only in schools and parishes, but also in health, aged care, and social services.

The Fairfax story referred to health jobs being at risk but Catholic Health Australia – the largest non-government provider grouping of health, community and aged care services in Australia – said it did not believe the Archbishop’s comments were meant to refer beyond schools and parishes.

“Catholic health services are equal opportunity employers,” she said. “A really clear message from the (Catholic) health sector is we do not screen employees for their marital status or their sexuality now, (and) that is not going to change.”

Asked whether Catholic Health Australia should be concerned about the health impacts of the Archbishop’s statements on LGBTQI staff in schools, Greenwood said she was not able to comment on what “protections” from anti-discrimination laws were in place for Catholic schools and how they are or would be implemented.

Croakey has also asked for a response to the Archbishop’s warning from Catholic Social Services Australia, an umbrella body for 52 member organisations that provide social services to hundreds of thousands of people each year in metropolitan, rural, regional and remote Australia.

The St Vincent’s statement, which it tweeted (see image, below), said:

Some of you may have seen media coverage over the weekend concerning the Catholic Church’s approach to its employees and marriage equality.

We want to acknowledge this may be a difficult time for many of our staff, their families and friends.

We want to be absolutely clear: all our LGBTQI employees have the full support of St Vincent’s Health Australia. We value you. We recognise you and are grateful for your contribution and care.

This will never change.

St Vincent’s has a long tradition of embracing diversity in our workforce. We will continue to support all our staff in whatever marriage choices they make in the future.

All of our staff, whatever their life experiences and backgrounds, have a significant part to play in helping us serve the people who come to us for care. Our staff from the LGBTQI community are no exception.

We would say to our LGBTQI staff directly: our Mission – which is to bring God’s love to those in need – has been a beneficiary of your professionalism, kindness and humanity for more than 170 years, since the first St Vincent’s Hospital was established.

Our Mission is special because of your contribution.

The statement went on to offer free confidential support via the service’s Employee Assistance Program, and other support advice.

It was signed by:

Later this week, Hart issued an open pastoral letter urging Catholics to vote in the Marriage Law Postal Survey. In it, he says the Church “believes there is a core and fundamental wisdom and truth in the traditional definition and understanding of marriage that should not be ignored and is worth keeping for the health and future of our society.” 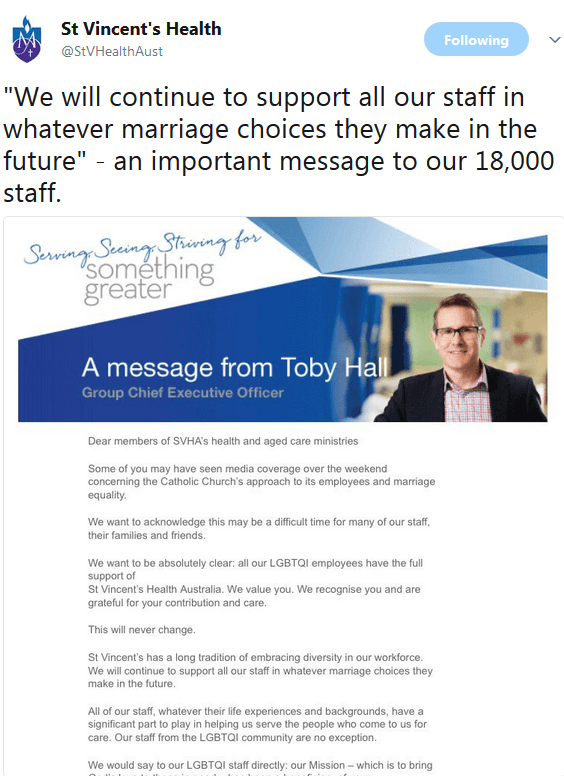 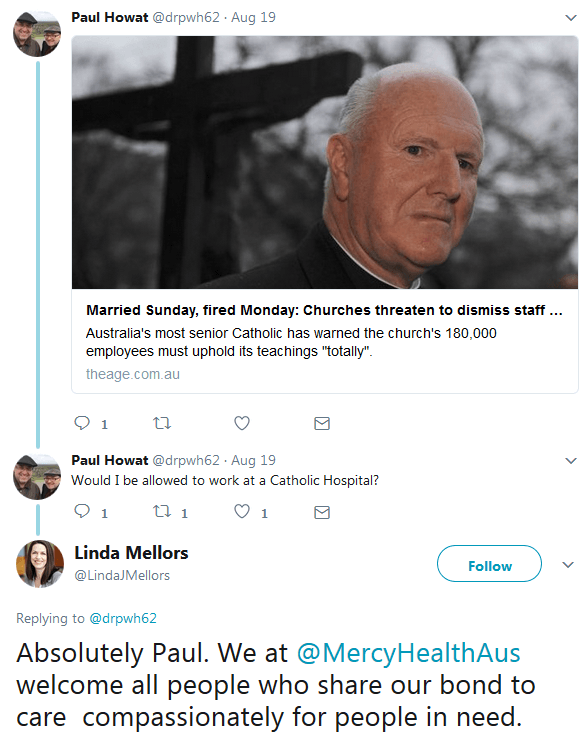