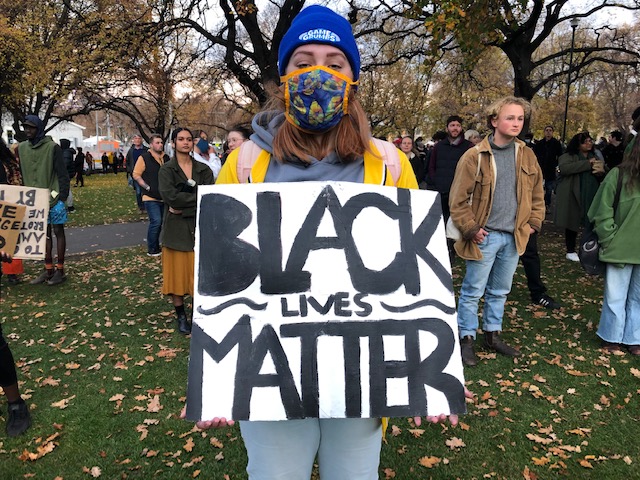 Stand with us. And clean out prisons

The COVID-19 pandemic is exacerbating the stress on prisoners and their families, according to Gunditjmara woman Tabitha Lean, who writes below why she supports calls to clean out prisons.

Let’s get this over and done with, right up front.

I have a criminal conviction. I spent two years in jail for fraud. I made mistakes, and some of them were despicable. My face was splashed across the TV and papers. My life became a magazine anyone could thumb through.

The reason I am telling you this is not to offer myself up for your judgement, but because I know how you like your news packaged in bundles wrapped with a certain amount of objectivity. Today, though, your news is completely cloaked in subjectivity, because I am bringing every ounce of my lived experience to this piece. Personally, I think that makes it authentic and genuine in a way you wouldn’t otherwise get.

So buckle up, this is not an academic exercise for me, I am telling it to you straight. I’m doing this because there are human beings sitting in cages right now…sitting ducks for all of the COVID chaos the earth can rain down upon them. And because this situation is urgent, it’s literally life or death stuff, so hold your judgement, we can get to that later, we’ve got lives to save.

Across the world we are witnessing prisoners being released – it’s happened in Turkey, Iran, and even some states in the United States. These compassionate releases acknowledge prisons and other custodial settings are an integral part of the public health response to COVID-19, and like the cruise ship, prisons are hot beds of disease with the very power to decimate whole populations.

In Australia, there are approximately 43,000 people incarcerated in prisons on any given day, one-third of whom are on remand, and to date I am not aware of there having been one single compassionate release. People inside are vulnerable. They are lonely, they are scared, and they know that the health services available in prisons will not be able to handle an outbreak.

On March 20, the Prime Minister announced that all personal visits to adult correctional facilities across Australia would be suspended. Three days later, prisons in South Australia closed the gates. As I write this, the prisons have been closed for 82 days straight. That’s 82 days that mothers have not held their children, 82 days since families have been able to sit across from their loved one, hold their hand and know they are OK.

I know of families who are sick with worry. Every day, they wait for the phone call from their dad, mum, son, daughter, brother, sister, just to know they are OK. I know children, little kids, who are asking their mamas to buy soap and send it in to their dad so he can wash his hands, because they’ve heard the public health messages, and if hygiene is a factor on the outside, they know we should be even more focused on it on the inside. And when they send in the soap, the prison authorities say, “oh we checked, we have enough in stock, everyone has access to soap”.

Let me give you some insight here, real insight and not a glossed up ministerial response. Yes, there is soap in most prisons…but…when I was in mainstream wings of the prison we had three bars per wing. Three bars. These were in the communal bathrooms. We shared three cakes of soap among 12 girls. That is no way to manage hygiene.

If you wanted your own cake of soap you had to buy it, and without money for commissary items, you simply cannot and therefore were forced to share. When I was in the high dependency unit, I had my own soap. However, when it ran out I had to ask an officer for more. Whether this was given to you was up to the discretion of the officer at the time. They knew we were entitled to it, but let me tell you, officers love to use the artificial arbitrary power they’re given by the state to determine who should get what and when.

People in prison in the middle of a pandemic cannot afford to have to rely on an officer’s appropriate and fair application of their powers, or their discretionary authority.

As people are warehoused in over-crowded cells, originally built for one, but now that those cells house two, social distancing is impossible. I think about the large dorm-like buildings with more than a dozen girls all crowded in. Cleaning surfaces with anti-bacterial products will be difficult. Oh, the prisons will tell you it’s not impossible. They’ll tell you that your fellow citizens have access to cleaning supplies which are actually in a locked cupboard you have to ask for permission to access.

Compassionate leave to attend funerals has also ceased. If you are unlucky enough to lose your own parent or child while you are in prison, you will not be able to go to the funeral to say your goodbyes. And I heard from a girl recently, that when she was taken in on a parole breach, she wasn’t quarantined at all, she was placed straight into the prison population.

But if all of that misery and suffering isn’t enough, and you don’t care about my fellow brothers and sisters in cages because, as many of you are fond of saying, “if they hadn’t done the crime, they would not now be doing the time”, I want you to know that every single day of every single week, 25,000 men and women across this country move in and out of the prisons into your communities and your neighbourhoods – some may even live next door to you. Some of their kids likely go to your children’s schools.

They’re called correctional services officers. COVID-19 doesn’t stop at the prison gates, if there’s an outbreak inside, your friendly officers will be the unwitting smugglers of the disease to you on the outside.

Cleaning out prisons is a public health response.

Don’t stand by and forget about the people locked inside because prisons are a vector for community transmission, and it will be our most marginalised communities who will be disproportionately affected.

Don’t let there be another death in custody. Stand with us, and demand the system does better by our fellow citizens.

Tabitha Lean: I am a Gunditjmara woman, born and raised on Kaurna country.

As a First Nations woman I am blessed to have my mother’s stories and the blood of all the women before me coursing through my veins. It is in their honour, that I centre their unique knowledges, and privilege their voices and stories in all my work.

I am a formerly incarcerated woman, still shackled to the system. It is part of who I am, but not all that I am.

(Editor’s note: The figure given for the number of correctional services officers was updated after publication)

PrevPreviousDuring pandemic disruption and recovery, how Croakey Health Media may be able to help
NextLast-minute reprieve on dental funding fails to address concerns for the futureNext