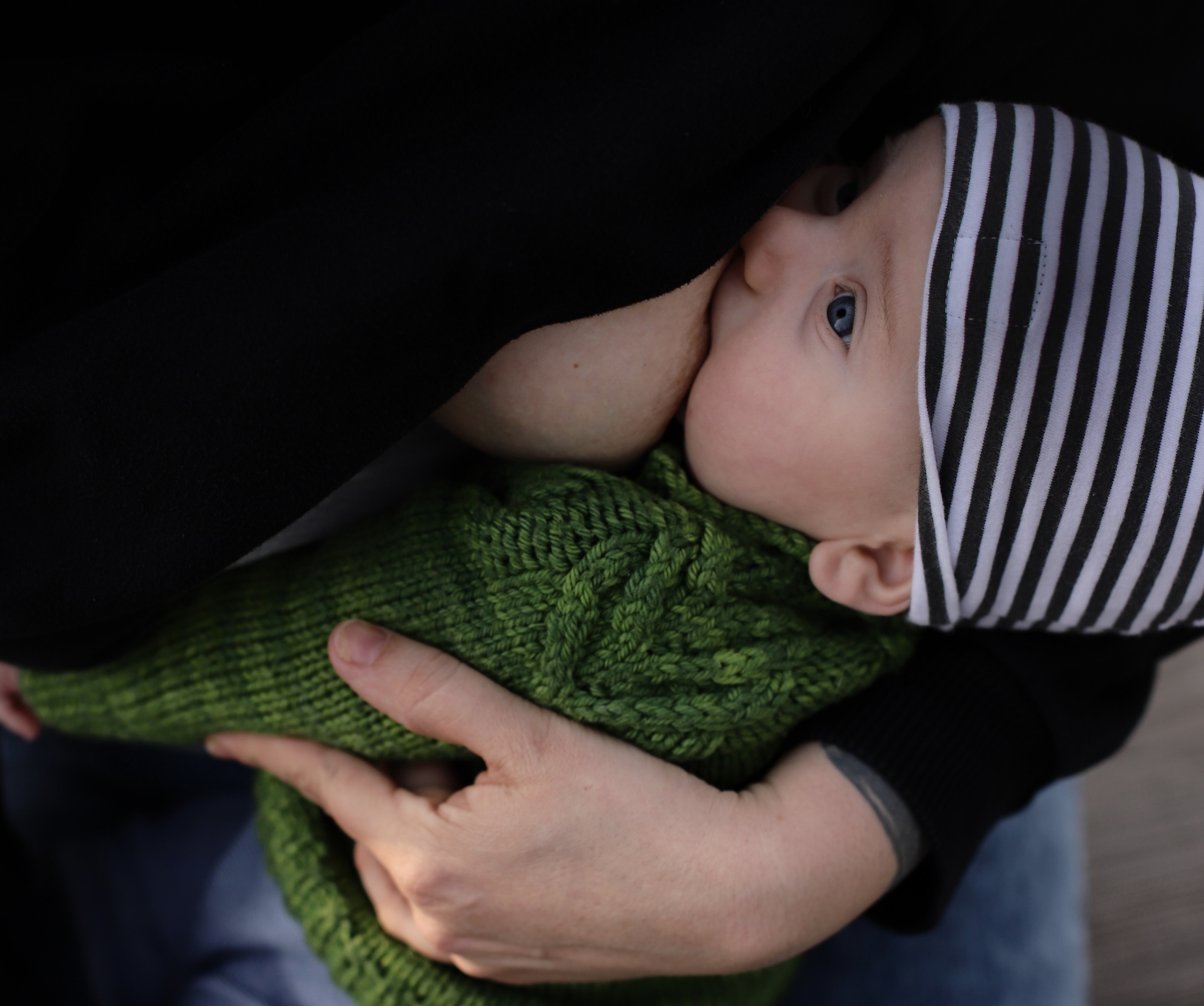 Photo by Ksenia Makagonova on Unsplash

Introduction by Croakey: An Australian and Norwegian research team has called for data on human milk production to be included in national and global food supply statistics.

According to the international research team, led by the Australian National University, tracking the levels of human milk production in Norway raised awareness of the benefits of human milk including “achieving healthy, secure and sustainable food systems”. Their paper is published in Public Health Nutrition.

Below, Dr Julie Smith and Dr Phillip Baker say that improving data collection on human milk production in Australia and other countries, following the example set by Norway, would help inform policies required to increase duration of breastfeeding, vital for the health and wellbeing of infant and mother health.

“Breastfeeding is the food system for infants and young children and justifies a greater profile in nutrition and health policy discussions,” they write.

Making breastfeeding more visible in food supply statistics helps secure policymaker attention to supporting it. It is time for governments everywhere to ‘step up’ with the stats on breastfeeding.

Milk produced by breastfeeding mothers is an important indicator of a nation’s food security for babies and toddlers, but if we don’t monitor trends, we won’t know its availability.

Food security is a growing concern internationally, but ensuring healthy food is available for young children is rarely considered. For this age group, breastfeeding is the basis for a healthy and secure diet.

It is also what the planet needs for our food system to be safe and sustainable.

Norway is a pioneering example of how tracking human milk production levels raised awareness of the value of human milk in achieving healthy, secure and sustainable food systems.

Norway has counted human milk in its food statistics since the 1990s.

Their experience suggests the importance of including human milk production in both national and global food supply statistics.

The Norwegian Health Directorate estimated total production of human milk (“morsmelk”) for babies and toddlers in the Scandinavian country increased from 8.2 million litres per year in 1993 to 10.1 million in 2018-19.

It can also be measured on a per capita basis, and the data for Norway shows the improvement in the country’s food supply for the 0-24 months age group. The amount provided every year to the country’s babies and toddlers increased from 69 litres in 1993 to an average of 91 litres in 2018.

Adding this kind of data on baby and toddler diets into policy thinking gives a clearer picture of the crucial contribution of mothers to our food supply and helps build systems that offer greater support to mothers and their babies.

There is increased attention around the failure to protect, promote and support breastfeeding in high-income countries like Australia.

Recent research has demonstrated the importance of breastfeeding to mothers and children, in rich as well in poor countries.

Premature weaning from breastfeeding is well known to increase the infant risk of infectious morbidity and mortality. Less well known is the heightened prevalence of dental malocclusions and obesity and Type II diabetes.

Breastfeeding helps the child reach their full cognitive potential, translating into better education and productivity outcomes in later life, and for society overall.

For mothers, longer breastfeeding reduces later risk of breast and ovarian cancer and the risk of diabetes.

In Australia, the 2019 Australian National Breastfeeding Strategy planned for a survey of infant feeding to track progress on the priority action areas. The country’s last infant feeding survey was in 2010.

Statistics matter because they are the evidence on which policies are built.

The Norwegian experience shows it is feasible, and useful, to include human milk production in food surveillance systems.

A recent World Health Organization (WHO) study revealed the extent of online exposure of pregnant women to aggressive marketing of breastmilk substitutes in many countries. In Norway, advertising or promoting infant formula to the public is unlawful.

Quality ‘Mother-Baby Friendly’ maternity care services are provided so that every baby is born in facilities meeting the WHO/UNICEF ‘Ten Steps’ criteria for successful breastfeeding. A step away from this during the COVID-19 pandemic quickly came under scrutiny.

Norway invests in the care of infants by funding several months of parental leave paid at full salary, and it is argued that maternity leave should be at least 36 weeks to avoid displacing breastfeeding. Mothers can at present take up to 31 weeks fully paid leave, with a further quota of 15 weeks paid leave for fathers.

Australian mothers can take up to 18 weeks leave which is paid at the national minimum wage, well below the WHO and NHMRC recommendation to exclusively breastfeed for 6 months. The discrepancy is an important incoherence in policy.

Improving the availability of paid leave improved the health of mothers and children in Norway, as it did when paid maternity leave was introduced in Australia in 2011.

Norway’s key to monitoring its human milk supply has been a regular and reliable breastfeeding survey.

In Australia, it is urgent for the new Federal Government to commit funding for the Australian Bureau of Statistics to run the long overdue second Australian Infant Feeding Survey, instead of relying on outdated 2010 data. The most recent available data suggests no improvement and a possible decline since that time.

A five-yearly data collection and reporting system should be adopted in Australia as the first critical step to advance action on the Australian National Breastfeeding Strategy.

The continued invisibility of breastfeeding in food production statistics ignores the immense scale of productivity by breastfeeding women, and the urgency of protecting and enhancing community knowledge and breastfeeding skills.

The second step is to bring maternity protection into line with International Labor Organization (ILO) and WHO recommendations. The recommended international standard for maternity leave is 18 weeks paid at a minimum of two thirds of previous earnings. The ILO standard is for this to be collectively funded through social insurance or public funding.

The WHO recommends six months of exclusive breastfeeding and continued breastfeeding to two years and beyond to optimise women’s and children’s health.

The ILO standard also calls for nationally legislated entitlements to paid breastfeeding breaks. Australia is one of the few high-income countries that lacks this, although the Sex Discrimination Act requires reasonable accommodations for breastfeeding women.

Unpaid care work is economically important and needs better resourcing. Addressing the ‘care deficit’ by the recommended childcare-related leave protections and paid breastfeeding break standards is estimated by the ILO to cost less than half a percent of GDP per year a year to achieve, and around one and a half percent to achieve universal high quality childcare services.

Bringing Australia into line with best practice ILO and WHO standards would involve a paid maternity entitlement of at least six months duration instead of the current 18 weeks. It would also involve an increase in the level of the payment to two-thirds of prior earnings, from the current level of the minimum wage.

Using the 2010 survey, Australian women were previously estimated to produce around 42 million litres of milk for their children.

Breastfeeding is the ‘first food system’ for infants and young children and justifies a greater profile in nutrition and health policy discussions.

Including data on human milk supply in Australia’s food statistics will provide a necessary foundation for our food, health and economic policy and planning.

Dr Smith has broad academic, NGO and policy experience. She was an expert adviser for the US Surgeon-General’s Call to Action on breastfeeding, and led evidence reviews for the Australian Department of Health and the World Health Organization. She has worked with international and Australian civil society organisations. Before her academic career, she was a senior economist in the Australian and New Zealand treasuries and the Parliamentary Research Service.

Dr Phillip Baker is a Senior Lecturer in food policy and international nutrition at Deakin University, Melbourne, Australia. He has a PhD from the National Centre for Epidemiology and Population Health, Australian National University. His research focuses on understanding global food systems change, and the implications for human and planetary health. Recent work covers the global rise of ultra-processed foods, the political economy of food systems, and the commercial determinants of infant and young child nutrition. He has regularly consulted to United Nations nutrition agencies, was recently a member of the Global Nutrition Report’s independent expert group, and a fellow of the Lancet Commission on Obesity. Dr Baker teaches high-enrolling units on international nutrition, and food policy and regulation.