Stickin’ It Up The Smokes – has there been a catchier campaign name?

(This post was updated on 23 Aug with quit-smoking news from the Kimberley Aboriginal Medical Services Council).

The NACCHO Summit has been hearing about different tobacco control projects that are underway across the country.

While their goals differ, they all are harnessing new technologies and online communications channels, reports journalist John Thompson-Mills.

Tobacco control projects in the spotlight

Tablets are being used to survey Aboriginal and Torres Strait Islander people and the staff and clients of community controlled services about smoking-related issues.

The Talking About the Smokes project aims to better understand the pathways to smoking and quitting for Aboriginal and Torres Strait Islander people, and to evaluate what works in helping them to quit smoking. (Many organisations are involved in the project, as outlined here). 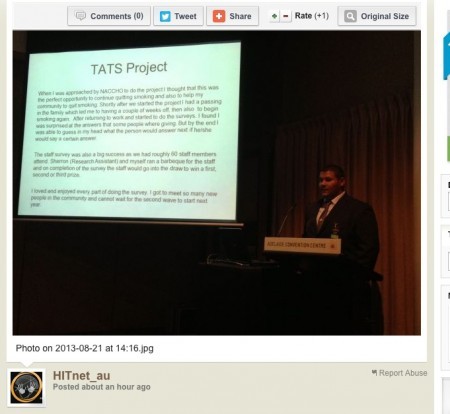 So far, more than 2400 Aboriginal and Torres Strait Islander people have completed the first wave of the survey, which has seen health workers and even community Elders involved in collecting the data, using tablet technology.

Vouchers to supermarket and other major shopping chains are also used as inducements to encourage participation. A second wave of the survey is about to begin.

Jamahl, a Townsville health-worker, has been smoking since he was sixteen. He’s been convinced quitting is a good idea since recently losing a dearly loved Aunty to cancer.

Jamahl has taken the survey, and was surprised about what he learnt.

He says it’s made him think differently about his community and is convinced other respondents will feel the same way.

In NSW, more than 1000 “Tobacco Resistance Toolkits” have been downloaded since the Australian Health & Medical Research Council launched “Making It Work” in October last year.

These offer a practical template for data collection, creating a smoke-free workplace policy and how to source current facts and figures, called “Let’s Get Started.” A fourth module, Social Marketing, is about to be launched.

The three-year program has placed no limit as to how many modules will be available to its service providers. The more the community needs, the more consultation-based modules will be developed.

Once again, the community will shape and drive the program.

Jasmine Sarin who presented the seminar at the NACCHO Summit said defining success won’t be about the Toolkit’s effect on smoking prevalence.

“It’s more about measuring how people move through stages of change,” she says. “So, not smoking in the home anymore, or no longer smoking around children, any improvements in those areas would represent a success for us.”

Stickin’ It Up The Smokes 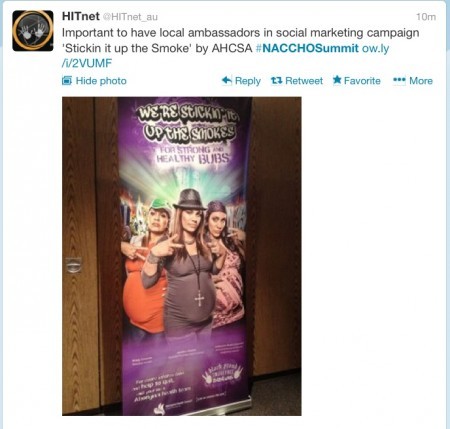 The answer is Stickin’ It Up The Smokes, put together by the Aboriginal Health Council of South Australia (AHCSA).

Using social media, a series of flyers, posters and regional radio ads, a multi-faceted campaign has been pulled together in very quick fashion and for very little cost.

But by bringing in a number of Aboriginal media students and finding a young social marketing expert, the final outlay was a fraction of that, at $2,000.

Speaking at the NACCHO Summit, Williams said the campaign only took four months to go from concept to delivery; a massive eight months quicker than a Government-led process would have taken.

She even managed to get some help from X-Factor finalist Ellie Lovegrove who wrote a rap for the campaign.

There were some challenges though. Convincing some community Elders about the merits of the strategy took time. And it was a struggle to find the nine non-smoking ambassadors until a Facebook campaign was launched. Then the quota was filled within two days.

The aim of the Stickin It Up The Smokes campaign is modest:  a 2.1% per year reduction in smoking during pregnancy for Aboriginal women by June 2016. 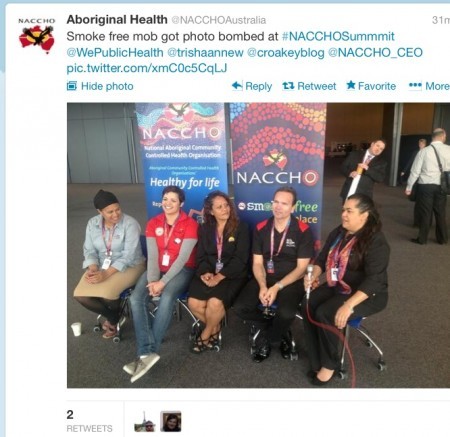 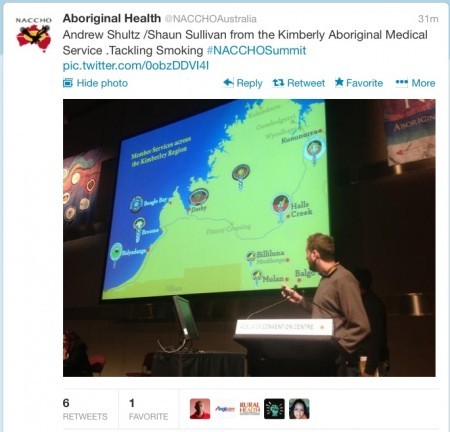 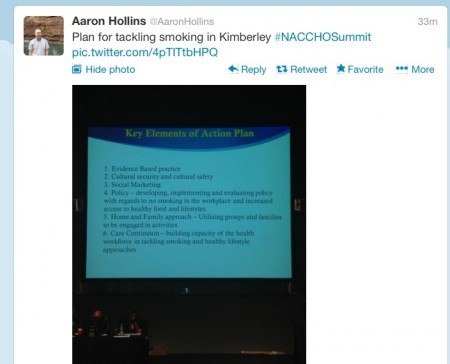 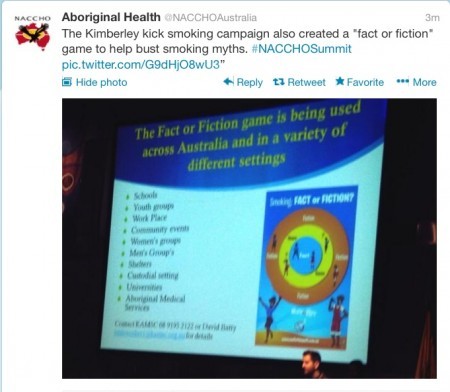 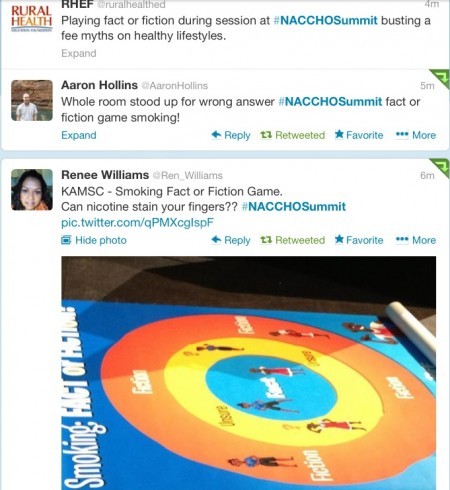 ***
For previous Croakey reports from the Summit

• Getting active at Warburton and healthy catering guidelines

• Improving the lives of disabled people in remote communities: case study from Warburton

PrevPreviousGetting active at Warburton, and some healthy catering guidelines
NextEarly education and care: the best start for Australian children?Next