Some of the big challenges facing the country’s 31 primary health networks (PHNs), established in July 2015 by the Coalition Government to replace the 61 Medicare Locals created under the previous Labor Government, were highlighted at the recent National Rural Health Conference in Cairns.

While his analysis was focused on Queensland, it is likely to be relevant for many other places.

Meanwhile, Phil Edmonson, CEO of Primary Health Tasmania, shared some telling glimpses into the tensions that PHNs face as “little fish” doing big tasks – as commissioners of services and agents of disruption.

In the #LongRead below, Melissa Sweet reports for the Croakey Conference News Service and you can also watch interviews with both Twomey and Edmonson below.

Mapping some barriers to action on the SDOH

Insights into the immensity of the task facing the Northern Queensland Primary Health Network (NQPHN ) can be found in its inaugural Health Needs Assessment, published almost a year ago.

This PHN covers a vast area – twice the land size of the United Kingdom – but is home to only 730,000 people, who are mostly in the regional centres of Cairns, Townsville and Mackay, although populations with the greatest need for health services are often in remote areas.

The needs analysis graphically illustrates the link between social and economic disadvantage and poor health outcomes, as well as the big health inequities evident within the PHN’s boundaries (see more details in the images at the end of this article). Areas with the worst health outcomes tend to have worse social and economic indicators and greatest difficulty accessing health services.

About 11 percent of the total Australian population of Indigenous people live within the NQPHN region, with Aboriginal and Torres Strait Islander people being the majority in 13 of the 31 local government areas falling within the PHN.

The needs analysis also reported that one in five people in the PHN said they waited longer than acceptable for an appointment with a GP in the last year, while more than one in four said they could not see their preferred GP at any time in the past year, and one in ten delayed or did not get prescription medicine in the past year due to cost.

The needs analysis also highlights an “overwhelming need” for more mental health services across the PHN, especially for the Torres Strait and Cape regions, where people “have no access to acute mental health beds and poor access to mental health professionals”.

The needs assessment makes it clear that efforts to improve health in northern Queensland must tackle the social determinants of health (SDOH), as well as ensuring better and more equitable access to more appropriate health services, especially in the community.

However, the PHN’s chair, Adjunct Associate Professor Trent Twomey, presented a series of maps at the National Rural Health Conference that powerfully illustrated a lack of convergence in governance between the various domains relevant to SDOH action.

These included non-aligned boundaries for the governance of education and training, police, local government and health services.

He suggested the need for governance based on “communities of interest”, and said:

We think we are the most over-governed part of Australia.

We have these multiple layers of governance that don’t align. In northern Queensland, we have an innate distrust for government. Brisbane is an awful long way away and Canberra is even further.

How can we create a better system of local governance, not only in primary health care, but in those other areas that will address the social determinants of health?

It is extremely difficult for regional Queenslanders to have control over their destiny if the boundaries of all the different state and federal agencies don’t line up.

We have a plan to align all the boundaries. We want to have conversations about communities of interest.”

This concept, which recognised the profound differences between communities, would help to advance changes in primary healthcare, preventative health and the social determinants of health, he said.

“There is no such thing as northern Queensland,” he said. “We are a variety of smaller communities of interest.”

“If we want to have any meaningful results in closing the gap in Indigenous health, or improving the indicators in the generic health needs analysis, we need to have an underlying focus on addressing the social determinants of health.”

This meant reform of governance at all levels so that local communities felt empowered “to take control of our destinies in a planning process,” he said.

“The system of government, whether state or federal, is basically designed against us.”

Twomey called on the rural health sector to advocate for the Queensland Premier to address the governance structures of state departments to ensure that they enable empowerment for people in the regions.

“This needs to be something the Premier takes the leadership in, that Premier and Cabinet takes responsibility for,” he said.

This would contribute to a more streamlined system that empowered people in the region to take control of their destinies, and for local communities to be able to prioritise their needs and direct resources accordingly, he said.

Details from the PHN needs analysis

Illustrating diversity within the PHN… 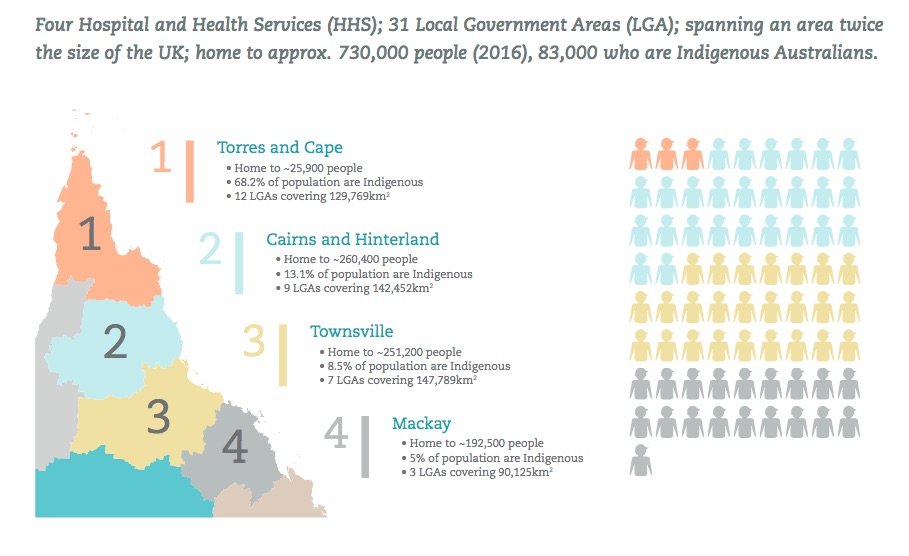 Illustrating inequities within the PHN and the State… 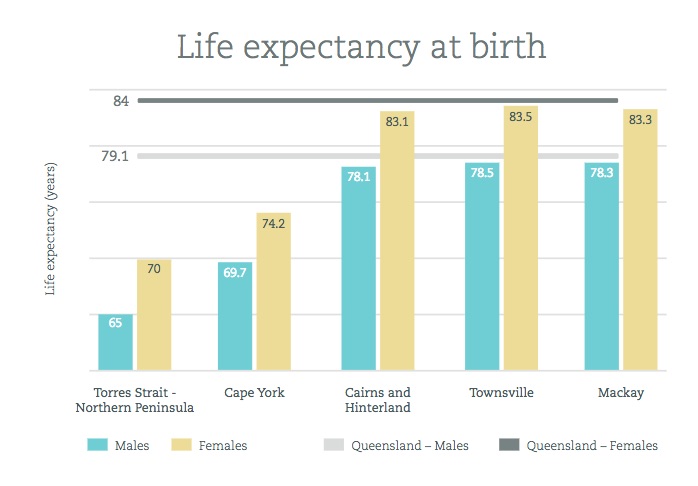 Concerns identified by the health workforce across the PHN… 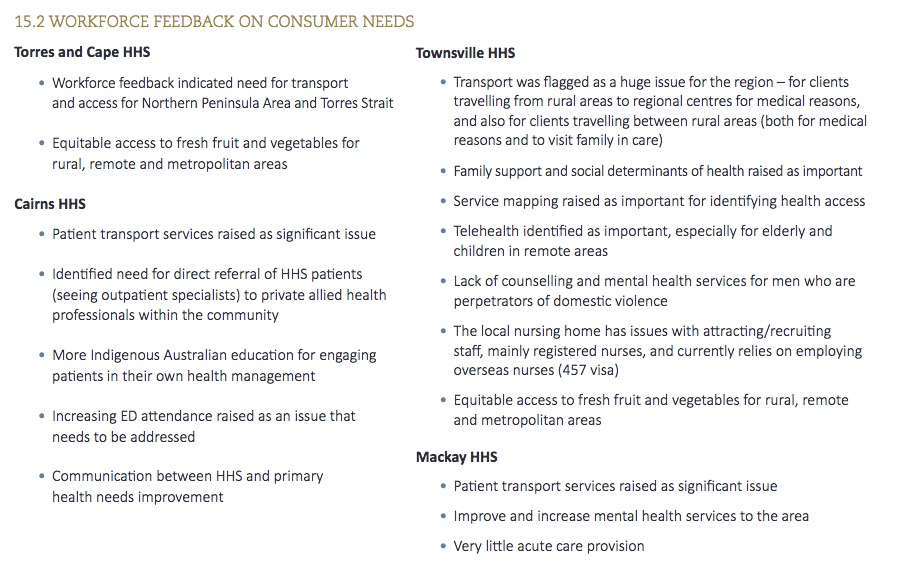 Mapping a vision for the future… 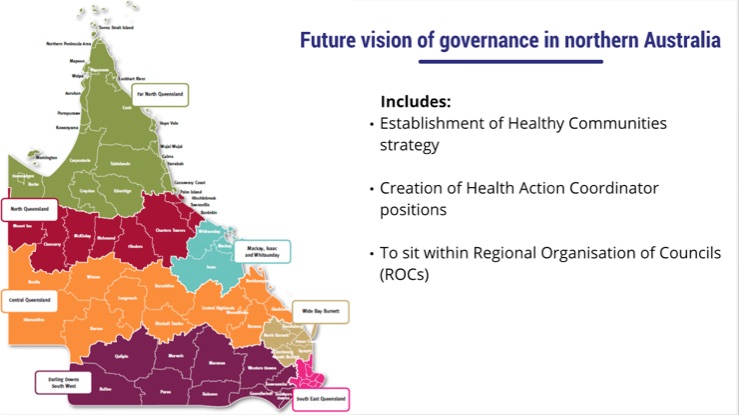 The tweet, below, of Twomey’s presentation is from Dr Tim Kelly, a rural GP and immediate past Chair of the National Rural Health Alliance (while tweeting the conference for @WePublicHealth) 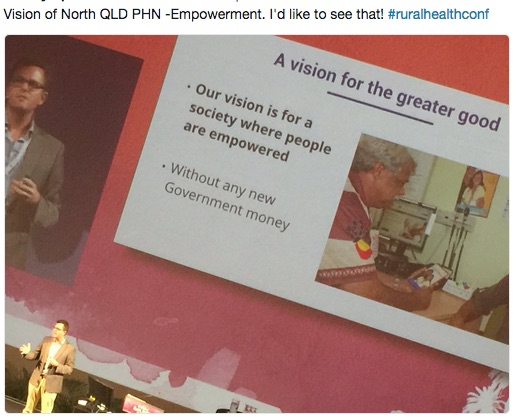 Watch an interview with Trent Twomey

While PHNs are small fish in a huge ocean of health funding, they must be capable of creating seriously disruptive waves while also facing off dangerous sharks.

He didn’t quite use those exact words, but that is the image that sprang to mind when listening to Phil Edmondson, CEO of Primary Health Tasmania, describe the challenging roles of PHNs since they replaced and succeeded the former Labor Government’s Medicare Locals.

Edmondson who has worked in primary care organisations since the days of Divisions of General Practice, which came before Medicare Locals, sees PHNs as the third and most advanced iteration of organised primary care in Australia.

However, his experience – of coming under public fire from journalists, politicians and others – is a reminder of the complex environment in which these organisations work.

Next to the “behemoth” of the wider Australian healthcare system, PHNs are “little fish” that must create change through partnership, leverage and influence, he said.

“We don’t have the capacity to actually buy change in the same way that major government can when they make large scale investment,” Edmondson said.

Nonetheless, the PHNs’ role as commissioners of mental health and other specific services provided an opportunity for disruption, so that services better meet the needs of communities.

We’ve had a very provider- and a funding-centric thinking to our system for a long period of time.

This is about trying to get that shift so that we get a partnership between providers and patients in ensuring that the right services get to the right people and they get the right outcomes for those people.

That’s ultimately what our disruptive role is; it’s asking those questions and it’s being prepared to make some of the tough decisions about where the best bang for the buck can be achieved and where the needs are most demanding of the limited resources that we have.”

This approach has resulted in some uncomfortable moments for Edmondson and his organisation, including public attacks, as the tough questions they are raising “immediately sends shivers of concern through the funded sector”.

“Things don’t always go to plan,” he told the conference. “Unfortunately squeaky wheels and the media have a very unpleasant cohabitation habit.”

Edmondson said such experiences had reinforced the need to take multiple stakeholders, including communities and providers, on the journey of primary health reform, by clearly articulating the need for change and ensuring there was proper time and process to enable that.

In a commissioning relationships, PHNs are much more closely involved in working with providers to ensure that services are flexible and responsive to community’s changing needs, he said, rather than the “old style, set-and-forget contracting where resources are handed out under a contract and you report back every 12 months”.

Edmondson said the Aboriginal community controlled sector was at the forefront of responding to the social determinants of health. “We have much to learn from the way in which they approach delivery of services to their communities,” he said.

While there was growing acknowledgement at all levels of the health system about the importance of addressing the social determinants of health, there was much more work needed in this area, he added. 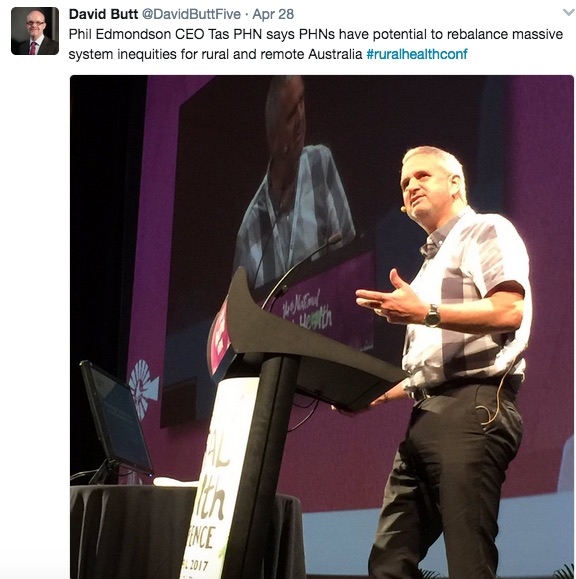 Watch an interview with Phil Edmondson