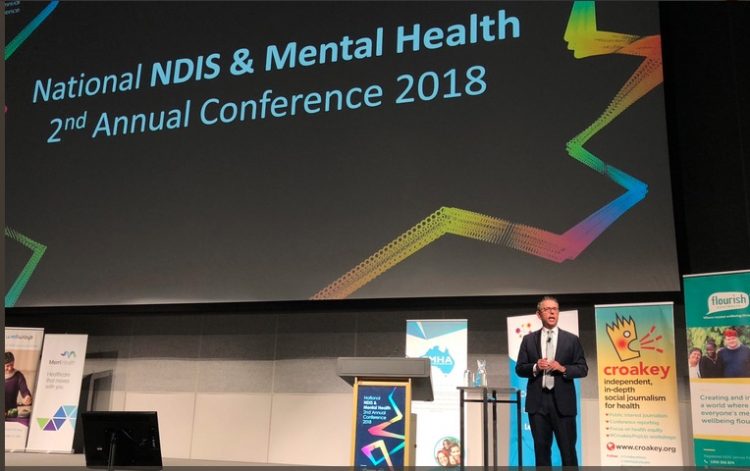 Dr Norman Swan is MC at the two-day conference. Photo by Marie McInerney

Former New South Wales Liberal leader and chair of Lifeline John Brogden has called for “loud voices and loud action” on flaws and gaps in the rollout of the National Disability Insurance Scheme (NDIS) that are risking harm to people with serious mental health issues.

Brogden, who survived a 2005 suicide attempt, also repeated his recent call for a national suicide reduction target and called on mental health advocates and the media to focus more on stories of recovery and hope.

Brogden was one of a number of strong consumer voices speaking yesterday in Melbourne at the National 2nd Annual NDIS & Mental Health Conference, hosted by Mental Health Victoria and Community Mental Health Australia.

The conference comes amid recent developments in mental health, including the Morrison Government’s announcement of a Productivity Commission inquiry, and last week’s election pledge by Victorian Premier Daniel Andrews to hold a Royal Commission into mental health if his government is re-elected this month.

Journalist Marie McInerney reports on the opening day of the conference for the Croakey Conference News Service.

Since surviving a suicide attempt in 2005, former NSW Opposition Leader John Brogden has been a strong advocate for mental health and has been confident in his recovery since that very public experience.

However, he told the national NDIS and mental health conference in Melbourne that he had been blindsided by another mental health breakdown two years ago.

“I had taken on too much and found myself back in that black hole again,” he said. “I had never anticipated it would come back.”

He was returned to the flawed mental health system, describing how an “unskilled” doctor patted him on the shoulder and told him it would be all right.

More worryingly, he was finally discharged last year from his local hospital and is yet to receive a follow up call, despite evidence showing that the greatest predictor of suicide is an earlier attempt.

“I don’t blame the staff, but the system’s wrong,” he said.

Brogden said he is lucky enough to have a wife and family, means and support to have been able to recover without that follow-up support. “I grieve for those who aren’t in my situation who are waiting for their phone call.”

Brogden has called for a 25 per cent suicide reduction target over the next five years in response to the latest ABS figures revealing suicide deaths had risen by nine percent in just a year, to try to galvanise not just politicians but the public.

He told the conference he is “agog” over the rising suicide numbers and lack of outcry, asking them to imagine the outrage if eight people died by drowning in pools and beaches every day in Australia as they do by suicide.

“We’ve never spent more money or talked more about suicide more than we do now, mental health has never had more funding or awareness, yet the suicide rate has never been higher”.

“People need to know there’s a way through and I’m not sure that’s he message we send, that the media more broadly sends on our behalf. We need the stories of people who have come through traumatic events and can live with a mental illness.”

It’s a message that many mental health consumers and services have been trying to send about the NDIS. They worry that its focus on permanent disability and an eligibility process that emphasises deficits rather than strengths contravenes the recovery model that is so vital to mental health support.

Brogden said the NDIS for people with mental health issues was “better than nothing – but very uncooked”. Only around 65,000 Australians are expected to be eligible for mental health support from the NDIS, just a fraction of those estimated to need it.

In an interview with Croakey, he said:

It’s a start but it’s not anywhere near good enough. My message to this audience is don’t be happy with the story or the spin or the offer that ‘we’ll get there’.

A lot of public pressure needs to be applied, loud voices and loud action.”

Former Prime Minister Julia Gillard, whose Labor Government introduced the NDIS more than five years ago, defended the inclusion of people with serious mental health issues, or psychosocial disability, in the Scheme.

“Some say including psychosocial disability was a mistake,” she told the conference. “I don’t believe it was. If it wasn’t included, people would be advocating for it to be now.”

Now chair of beyondblue, Gillard said she understood that it must be frustrating for families and people with mental health issues to experience initial problems with the Scheme, but she said “great reform does take time to grow deep roots”.

“Making (the NDIS) happen was and is big and nation changing, but let’s be clear what it is or is not. It was never intended to replace the mental health system.”

She urged mental health consumers and advocates to make sure their voices were strong and united, to bring about the change needed.

“I know from my own time in politics that decision makers get let off the hook when advocates compete and criticise each other rather than adhere.”

Professor Patrick McGorry, Executive Director of Orygen, welcomed the pledge by Victorian Labour Premier Daniel Andrews to hold a Royal Commission into mental health if his government is re-elected on November 24.

McGorry said he believed Labor was committing to a Royal Commission, not as an exercise to “kick the can down the road” but in the spirit of its 2014 pledge for a Royal Commission into family violence which became “a vehicle for major reform and very substantial investment”.

He urged the State Opposition to make the same pledge, though its mental health spokeswoman declined to do so when asked in a later panel session.

Where is the focus on human rights?

Consumer leader Janet Meagher AM, who was diagnosed with schizophrenia 50 years ago, was a National Mental Health Commissioner and is a current member of the Independent Advisory Council of the National Disability Insurance Agency, said people with lived experience don’t need a Royal Commission into mental health.

“We need a Royal Commission into the human rights of people with mental illness, led by a person with lived experience,” she said.

Brogden acknowledged concerns from others in the sector that the Royal Commission could just be a “gab fest”, but said they should use it as “another opportunity to highlight” flaws and solutions.

But he urged that it not be headed automatically by a judge, saying it needed to have “someone who is acutely aware of mental illness” at its helm.

McGorry also urged efforts to make the NDIS work for mental health, which is the biggest cause of disability in Australia by far but was “an afterthought” for the development of the NDIS and was likely only to be accessible for ten percent of people with significant mental health issues.

“That is a massive equity problem, apart from the design issues,” he said.

Gillard said people living with mental health and their families “have had enough of not being heard and of vested interests” and that a newly published book about peer work by Janet Meagher,“gives us the vey simple and powerful reminder that to get service and support right, we must be led by people with lived experience”.

Fels said consumer representation needs to go beyond policy and service delivery, to have “a much bigger role in governance”.

“It’s a bit supply side driven,” he said.

He also hoped the upcoming Productivity Commission inquiry, which he had originally proposed two years ago, would “dig as far as possible” into mental health and disadvantage.

Watch the interview with John Brogden 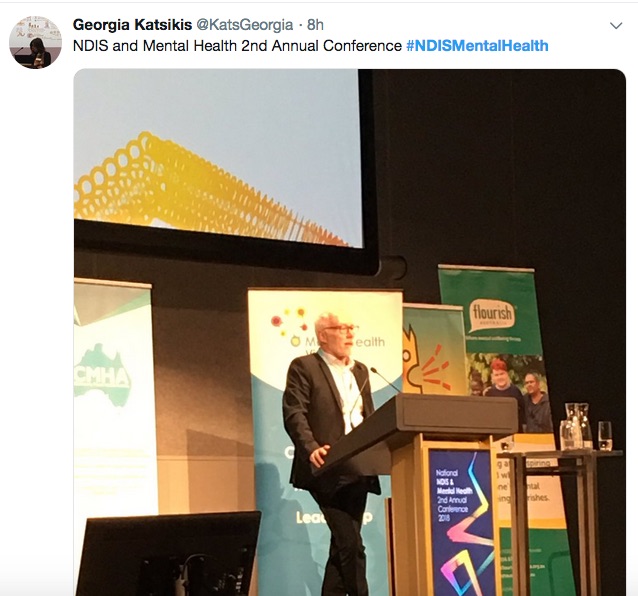 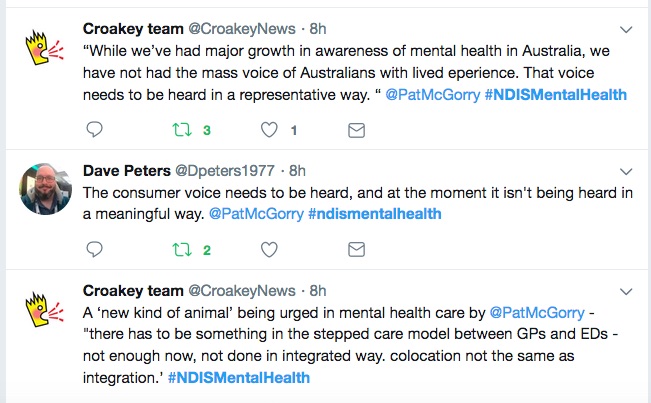 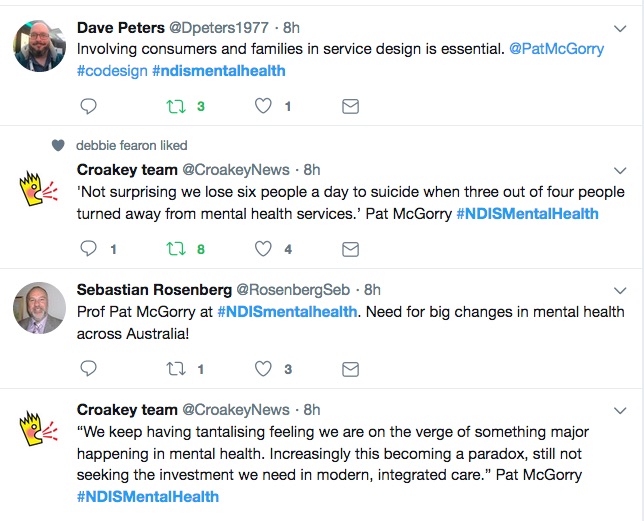 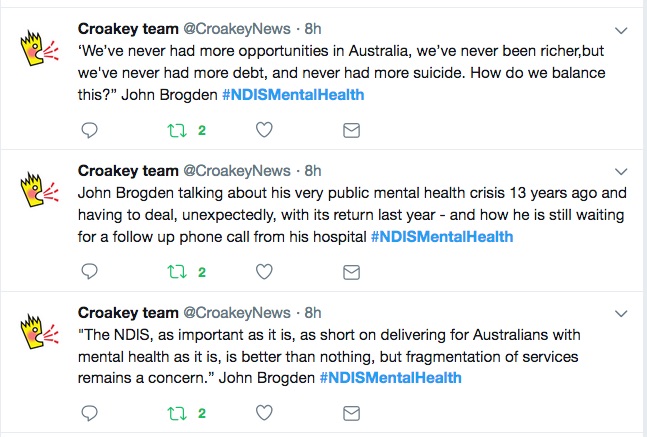 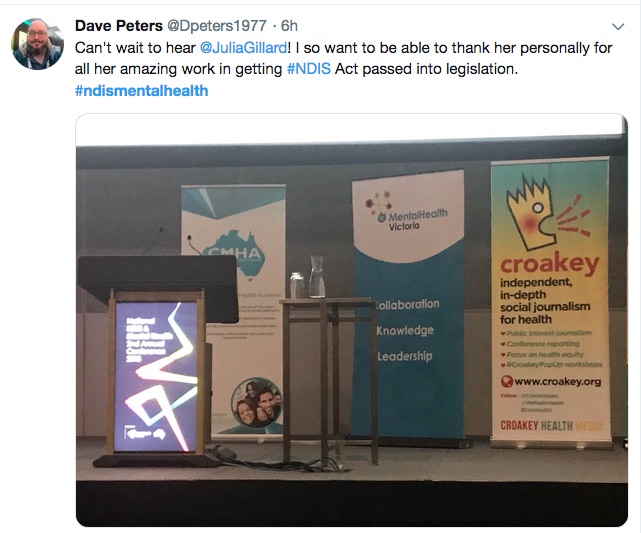 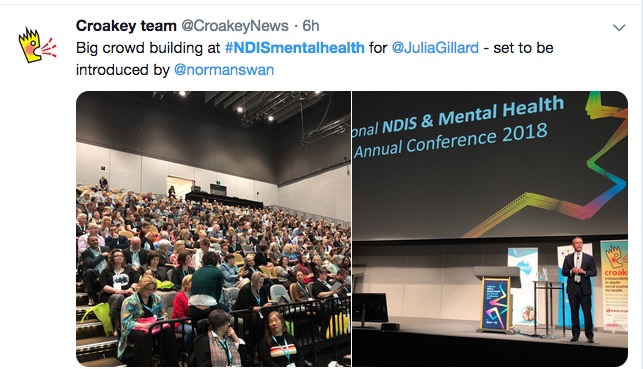 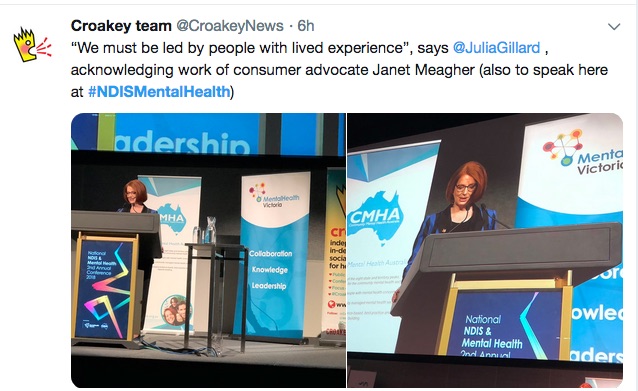 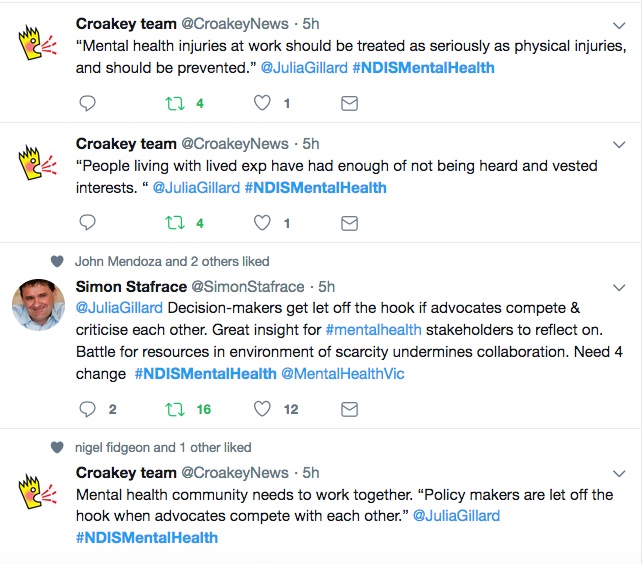 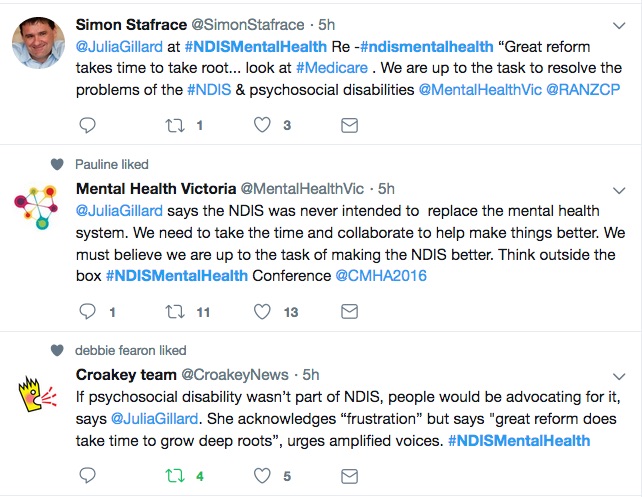 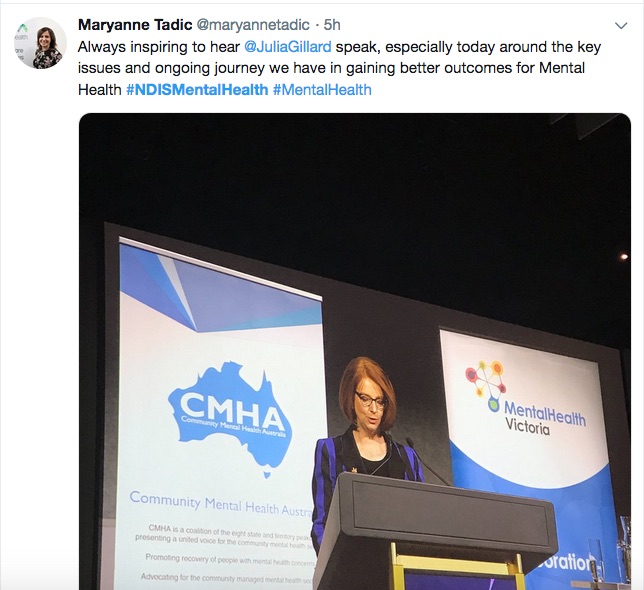 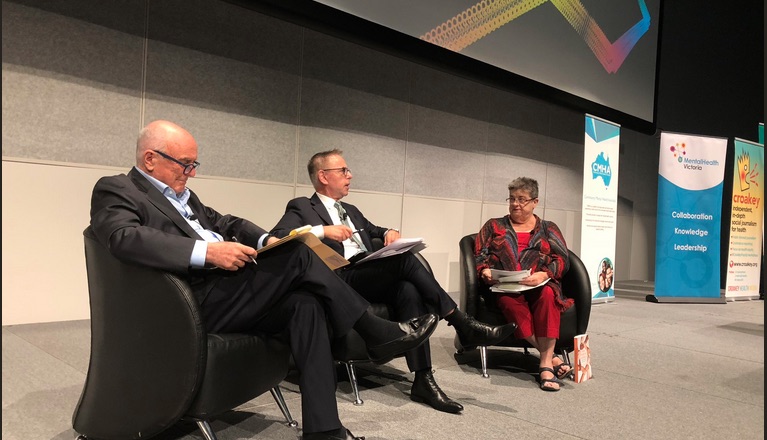 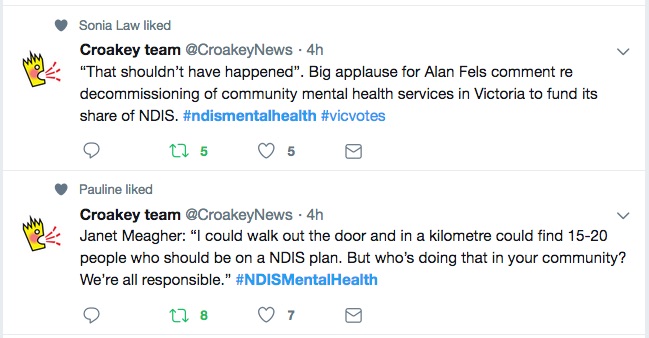 … to all who have contributed through tweeting and sharing the #NDISMentalHealth news. The hashtag trended nationally and in Melbourne. 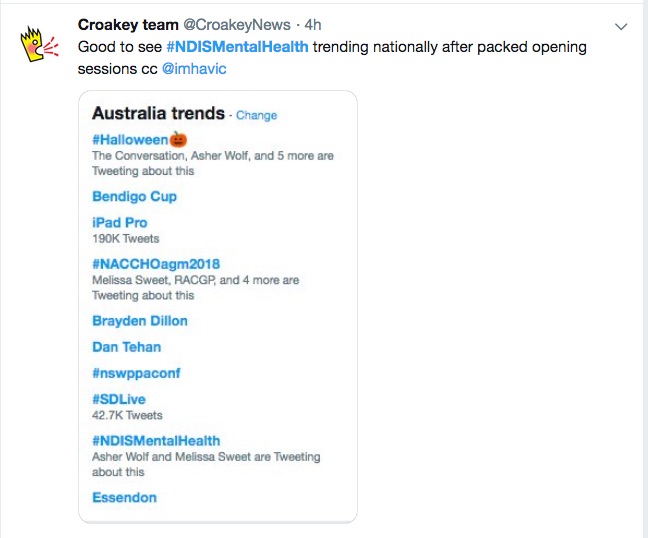 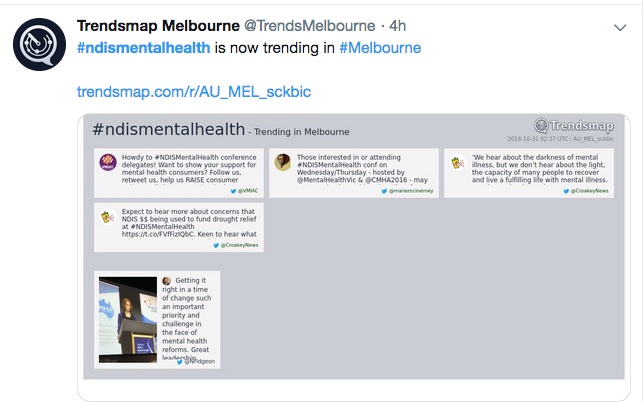 Bookmark this link to track Croakey’s coverage from the conference.