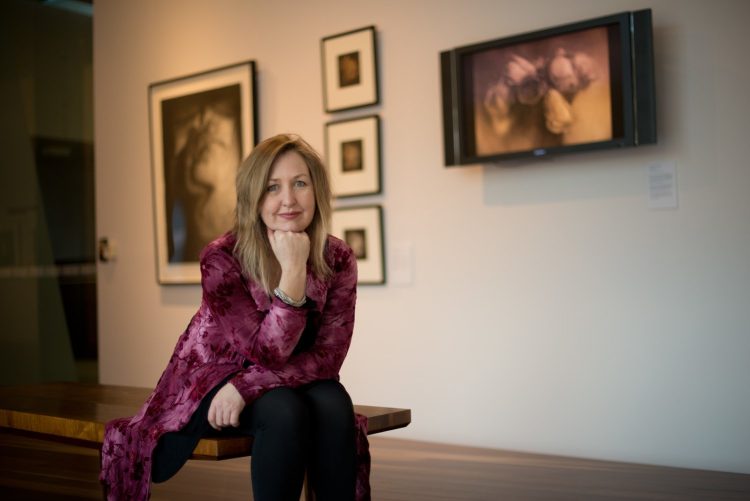 Artist and physiotherapist Margaret Ambridge: prompting us to think about our last hours, days and minutes: Photo credit: Mark Fitz-Gerald

A pillow shows the indent of a dying patient’s resting head, capturing the traces of life after it has left.

More than 1,000 images of flowers bloom, wilt and die, mirroring our own cycles through life and journeys taken in a hospital or hospice.

A woman shares her partner’s death bed. They are wrapped together tightly, with a pump line delivering medication as he keeps a frail hold on life.

These are raw, powerful glimpses of death and dying, provided through the art of Margaret Ambridge. They are among the stunning and moving works in her ’til death exhibition, which was staged in Adelaide in association with the Australian Palliative Care Conference last week.

Working primarily with charcoal, “because it provides so many shades of grey”, Ambridge has been a finalist in many major Australian art prizes including the Waterhouse and the Kedumba Drawing Award.

But she is also a physiotherapist at a palliative care facility in Adelaide. Each of the 50 or so works in the exhibition aim to “capture the strength I see in humanity”, to explore the process of dying and the effect it can have on palliative care and other health workers.

“We are all human, we are affected by what we do,” she told Croakey.

“Palliative care is a very special and private work and health professionals are deeply affected by the work they do,” she said. “But they have very little opportunity to show or discuss their work.”

The exhibition was first inspired by one of her patients, an elderly woman who in her early days at the hospice was dressed beautifully, in full make-up, and surrounded by people and a ‘florist shop’ worth of flowers all around her room.

At the woman’s request, Ambridge cleared away some of the flowers that had died, but found a little group of bud roses that hadn’t been in water and had shriveled. They both agreed they looked rather beautiful and she asked if she could take them home to draw.

“When I went back a couple of days later to treat her, she was in a side room, dying, with no make-up, no friends, just the flowers. She was alone and I found this terribly sad. After all this entourage…when it came to the crucial moment, they were gone,” she said.

Another series of works, titled ‘What remains’, (see image below) emerged from a conversation with a friend who had become distraught when her mother’s body being taken away after she had died.

“She was so traumatised to see the pillow start to raise up and lose the shape of her mother’s head, that she lay down on it herself to hold on to that last impression of what remained.” 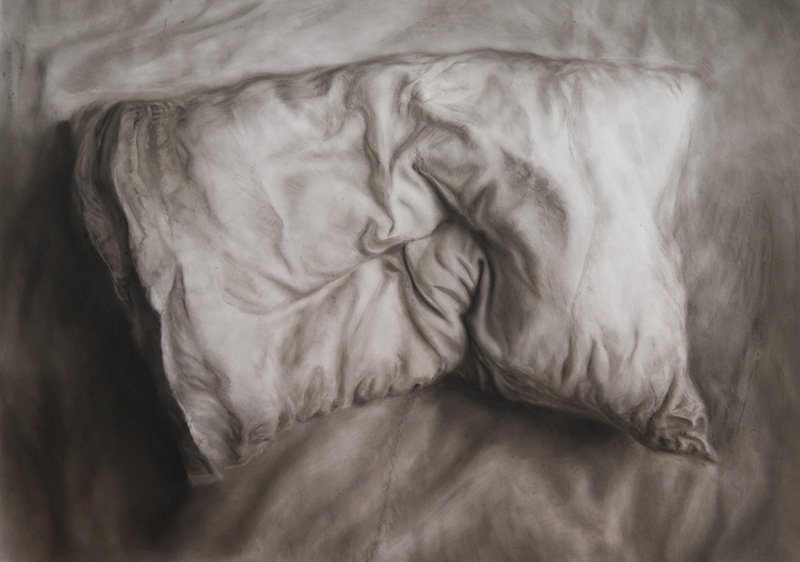 Her friend’s husband had not known about his wife’s distress at the time and had been very moved to hear it when he saw the exhibition.

“That’s happened multiple times with me over the past few days, where people have come and shared the stories of losing their loved ones, it’s been incredibly moving stuff, and also allowed a lot of people to talk about themselves.”

Another of the poignant pieces – of a couple sharing a death bed, after which the exhibition is named – sparked comment at the conference from international keynote speaker Dr Alex Jadad, struck that it had come from Ambridge’s efforts at the hospice to introduce double beds for patients who were dying.

“It came from many conversations we had in the palliative care unit about patients (whose) loved ones had to sit next to the bed and hold hands through the bed rail,” she said.

“You’ve been lying together for 50 years: why just a hold a hand through a bed rail,” she says.

It took three years to work through the proposal for a double bed with staff and the service. Some of the concerns were practical – it can be harder for nurses to lean across a double bed and there can be issues with pressure sores, but Ambridge thinks a double bed also challenged an accepted medicalisation of death.

Since double beds were introduced, couples have been able to lie together, before and after death, as well as letting children tuck in closely with a dying parent.

Ambridge says she loves to be able to go into a creative space to explore these issues after a day at work.

But the driver for her is to use art to provide a glimpse into someone else’s world, and one we will all eventually enter, to prompt thinking about how we want our last days, hours or minutes to be.

“We’re all going to die,” she says, “and sometimes we don’t want to have those conversations at the end of the bed about where we want to die and who we want to be there.

“If we can start those conversations earlier, and art can be useful for that, then I think I’ve done something good.”

With thanks to Mark Fitz-Gerald for the photos used in the article.

Do make sure to watch this interview

Read more about her work and the exhibition here.

Dying for a cuppa

In more moving explorations of art and death, Palliative Care Australia awarded its art prize for this fantastic dress (see image below) crafted from tea bags used by grieving families.

The work, titled ‘Dying For A Cuppa’ was made by Karen Benjamin who works at a funeral home, where she makes a lot of cups of tea for people who are planning a funeral or grieving the death of a loved one.

“The gesture of a cup of tea and the chance to speak openly about death and dying soothes the soul.”

PrevPreviousSupporters rally in the slow march to marriage equality
NextStrengthening primary care in remote communities: the answers are close to homeNext