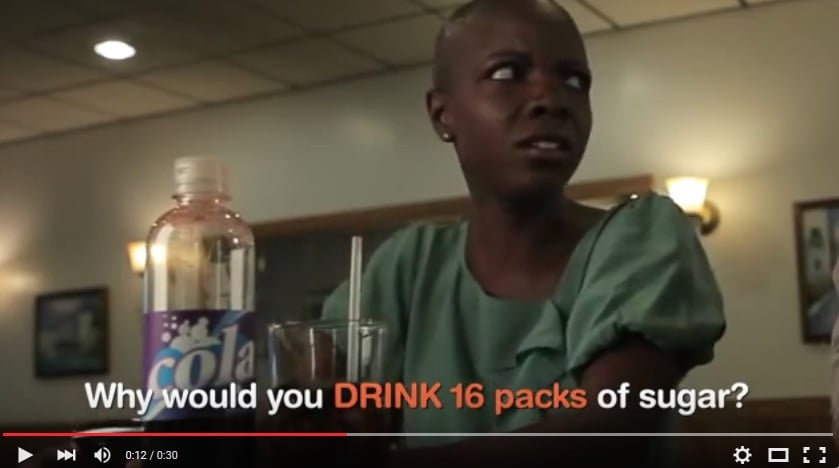 Public health advocates who take on powerful opponents often face a heavy price, whether as individuals who are intimidated, or as organisations that have to put valuable resources towards fighting vested interests.

This issue was a big focus of the session on advocacy at the recent Population Health Congress; however, the panel also gave many tips: find allies, use the right evidence, listen to others, share lessons and resources, and “just keep at it”.

Often at conferences this is a session for communications staffers: nothing against them (I have, in fact, been one). However, it was great to hear insights from researchers, policymakers, and decision-makers on how to win an argument and work with media.

He quoted Aboriginal activist Rob Riley – “one of my heroes” – about the virtue of keeping up the good fight, despite years and decades of obstruction and defeat.

But he said there are ways to endure: “They can lie, we can’t. We can never afford to be wrong. We have to stay with it…and we have to recognise there will be personal attacks: I’ve been sued, I’ve been followed, I’ve been spied on, lobbied against…”

A significant mark of success for Daube was having Australia now called a ‘dark market’ in a presentation by Imperial Tobacco, because of plain packaging laws.

One of his failures, he said, had been not recognising the need for a consistent message to take to government.

Daube described inviting former Labor Health Minister Nicola Roxon to speak with a group of Western Australian organisations involved in addressing obesity: “I thought ‘let’s get the advocates together, they’ll convince her to take action etc’.”

“It was an absolute disaster,” Daube said. “One group said it’s all about physical activity, another said it’s all about food and nutrition. They all competed with each other, there was no consensus. Nicola would have thought, ‘if they can’t get their act together how can I take on this issue and massive industry opposition.’ 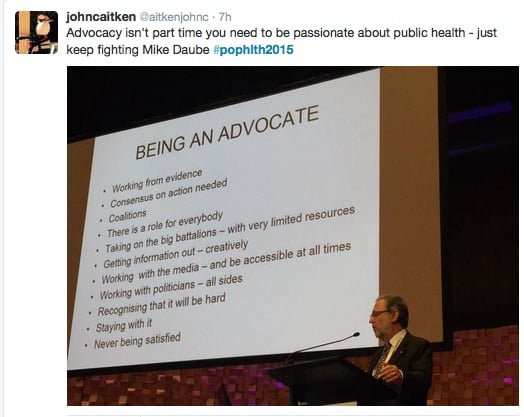 Hussey, the Wales chief medical officer, who had earlier inspired delegates with a keynote address, had a number of tips. One of her most successful campaigns was to convince young people in Swansea to be vaccinated after a major measles outbreak.

1. Get evidence into the debate

The quality and source of evidence is the key to credibility. She said: “There is a cacophony now of voices that come with a flick of a switch, a swipe of a smartphone: how do our voices stand out and become the trusted voices that people want to follow and listen to?”

Public health advocates also need to challenge some of those voices, and make sure that evidence is being reported effectively.

2. Know that advocacy and engagement are intertwined

“How do we ensure we’re in touch?” she asked. It was important to build coalitions and bring other voices to the fore, particularly when public health advocates are working with communities who don’t have voices.

“We don’t want to become their voices, but to work alongside them”. Language was also key, and must be framed in a way that builds strength and confidence and doesn’t undermine.

“It’s not enough to raise the issue, (actions) that succeed are ones that say ‘this is what we need to do’.”

Hussey pointed to the work in the UK led by Helen Bevan and the importance of narrative to achieve large-scale change, “appealing to heart and head at all times: one creates the connection, the other drives it through and sustains.”

She talked about work she had been involved in to get hospital chief executives interested in reducing harm from alcohol. The project used the techniques of large-scale change, appealing to them as managers and the impact alcohol was having on their hospitals, and as individuals around their own alcohol consumption, giving them a whole set of examples of the harms of alcohol, which was then followed up with a personal appeal.

She said: “We got massive interest from them, to the extent that they took it on board, did their own business case, worked out that the return on investment was a ‘no brainer’ within 12 months, and worked out the importance of specialist nurses and working with the third sector.”

5. The nature of evidence

In considering evidence and knowledge, she said it’s important to consider a range of binary issues:

“The reality is we’re caught between all of that all of the time, different types of evidence. We have to make sure that because we’ve asked the question a certain way that we haven’t missed the holistic answer.”

Hussey said it was vital to find the over-arching narrative that tells the story. “We do live in a world of 140 characters, and it is effective, it does work,” she said.

She had learnt a strong lesson from a former Scottish chief medical officer who told her he had got early childhood years on the health agenda with a powerful message to a politician: “the evidence says that poverty halves babies’ brain development”.

Hussey said: “Without being sound-bite driven, try to make it as clear as possible.”

Cancer Council Victoria has been in the firing line in recent months, subject to legal action from the tobacco industry to access its schools survey data.

It would give the industry access to personal information of thousands of Victorian children, detailing where they buy cigarettes and alcohol, what are their favourite brands and more.

Harper, Cancer Council Victoria CEO, said: “The tobacco industry ostensibly wanted to get it so they could test the veracity of our claims re plain packaging, but of course if they got the data there would be nothing to stop them using it for any marketing purposes.”

But he said there was also another likely agenda to the bid, which had been fought over the past 18 months.

“The objective often in these cases is not necessarily to get the data: their real objective is to create maximum distraction for an organisation like ours that relies on charitable support,” he said.

“We are now involved in a costly challenge, defending ourselves,” he said, adding that Cancer Council Victoria’s researchers, who had been leading the evaluation of plain packaging of tobacco have been distracted by having to defend the claim.

“That’s a great outcome for the tobacco industry,” he said.

But Harper said it was times like this where the value of organisational support was paramount, to have a board that was prepared to commit to legal defence, and there had also been welcome strong support from Federal and State Governments.

“Advocacy success happens because of people who work in government, not in spite of them,” he said.

“Some of our most fearless advocates in fact work in government and have to play challenging roles we may not appreciate (outside).”

Plain packaging of tobacco has also been a prime example of the importance of bipartisan support, given that advocates were working with Labor Health Minister Roxon on the legislation when it was clear there would soon be a change of government.

The need to win then Opposition support has paid off under the current Coalition Government, which has stuck to the policy through legal challenges to the High Court and in two international jurisdictions.

“If you think about the great public health success stories in past decades – tobacco control, road safety and HIV/AIDS – these are debates that are generally not polarised by politics,” he said.

And then of course there is the power of a fabulous idea, perfectly on show in this Cancer Council Victorian advertisement from comedian John Clarke.

Todd said this was able to used in Australia thanks to the willingness of public health organisations around the world sharing their experiences and resources – and often to media for being prepared to run them as part of news stories.

But as well as humour, satire and charm, there is also absurdity, he said. 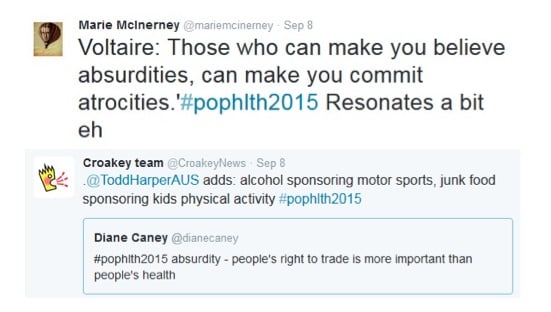 Bero is Chair of Medicines Use and Health Outcomes at the Charles Perkins Centre at Sydney University, and an international authority on research integrity, who has recently moved to Australia.

“I’m a statistics person, I love numbers,” she said. And that can be difficult when working with the media. But she said the “why don’t media get it?” complaint is really “a two way street”.

To that end, Bero and journalist and researcher Dr Ray Moynihan are running a practical workshop (in Melbourne and Sydney) for journalists and bloggers to look at “what lies beneath the health story surface”.

She also referred delegates to Consumers United for Evidence-based Healthcare (CUE): a national coalition of health and consumer advocacy organisations set up by Cochrane as a consumer advocate-scientist partnership to improve consumers’ ability to engage in and demand high quality healthcare.

How does Bero know if she is making a difference? She has looked at documents from the tobacco industry referring to her, which say things like “never go to her…but maybe we should monitor her work”.

She had also been told by regulators that “we need people like you to stand up and speak because we can’t do that”. 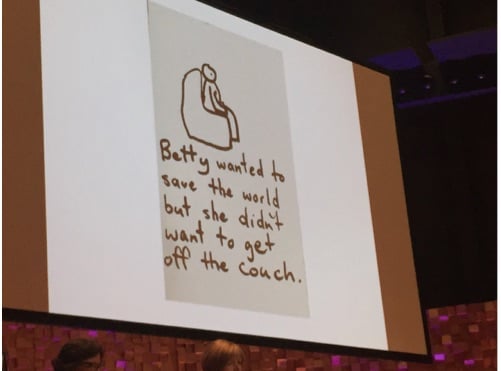 Bero also delivered a powerful presentation to the conference on how corporations aim to manipulate health research.

PrevPreviousAlcohol advertising: the time has come for independent regulation
NextAre you going to finish that? The dilemma of portion sizesNext