Health Minister Sussan Ley yesterday announced the Federal Government’s next step in taking the National Mental Health Commission’s landmark Review “from paper to policy” – with the first meeting held of an expert reference group “tasked with guiding the implementation of its recommendations”.

She said the 13-person Expert Reference Group (see the full list in the pic at the bottom of the post and background of each member here, thanks to Mental Health Australia) – led by former Beyond Blue CEO Kate Carnell AO – would engage with the wider mental health sector and finalise an implementation action plan for the Review’s recommendations by October.

For Sebastian Rosenberg, Senior Lecturer at the Brain and Mind Research Institute at the University of Sydney, there is a big splash of Monty Python about such an announcement, and disturbing signs in the ongoing delays to much-awaited reform and in the makeup of the ERG, particularly given the Minister’s only feedback so far on the Review’s recommendations.

Minister for Health Sussan Ley today announced details of the next stage of the Abbott Government’s deliberations in relation to mental health.  She revealed the composition and terms of reference of the Expert Reference Group (ERG) established to consider the Review of Mental Health Programmes and Services carried out by the National Mental Health Commission last year.

We now learn that the ERG will be given until at least October 2015 to carry out its work.  A minimum of two years will have elapsed since the Commission began its work.  As Monty Python put it: “Suddenly, nothing happened!!!”  Minister Ley’s decision around the timing of the ERG really indicates the lack of desire to do anything about mental health in this term of government. This is all the more frustrating when the Commission’s Review sets out several clear, practical and well-founded recommendations for change.

The Minister’s announcement about the ERG raises several issues beyond just delay.  The mental health sector is, after all, accustomed to waiting for reform. Her press release indicates the key role of the ERG is to develop an action plan for implementation of the recommendations made by the Commission.  However there has been almost no reaction by the government to these recommendations, apart from one.  On the day when the government was forced to release the Review, Minister Ley made a point of saying the government would not be supporting Recommendation 7 of the Review, which called for the staggered redirection of any Commonwealth hospital growth funding away from hospital-based services and towards hospital avoidance programmes, principally in the community.

This recommendation is entirely in accord with contemporary mental health reform and the reality of Australia’s unhealthy over-reliance on acute, hospital-based care. Unfortunately Minister Ley chose to make public statements to the effect that ‘no beds would close’.  This was a disappointing misread of the situation. Bed closure was never the focus of the Commission. There are enough mental health beds, we don’t need more (though their distribution could be refined).

There is now some reason to wonder if Minister Ley is really unsupportive of community mental health generally.  The ERG of 13 people has been established with a composition of six psychiatrists, two psychologists, one general practitioner, (only) one consumer, one researcher, one bureaucrat and Kate Carnell as Chair.  Nobody from the community sector organisations providing psycho-social rehabilitation services.  No allied health professional. No mental health carer.  One of the most important contributions made by the Commonwealth into mental health has been the Mental Health Nurse Incentive Program yet no nurse is on the ERG.  No Aboriginal or multicultural perspective.  On the other hand, private practice, fee for service mental health, is extremely well represented.  It is to be hoped that the ERG membership is not a reflection of where the Abbott Government thinks the solutions to mental health reform reside.

Meanwhile the mental health sector waits for the ERG to provide advice on the advice already provided by the Commission about a report the Government has not really commented on. Thank heavens the ERG will in its work also be considering the “the broader system leadership role that the Commonwealth plays within the National Mental Health Strategy”.  Several members of the ERG are closely associated with current policies, plans and programs.  There are advantages to this but independence, objectivity and innovation may not be among them. 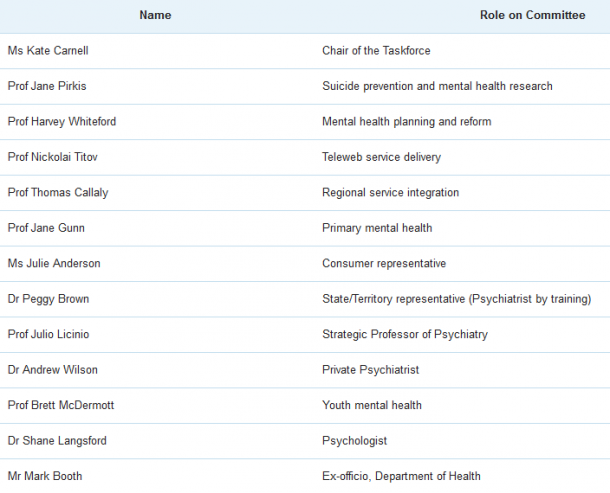