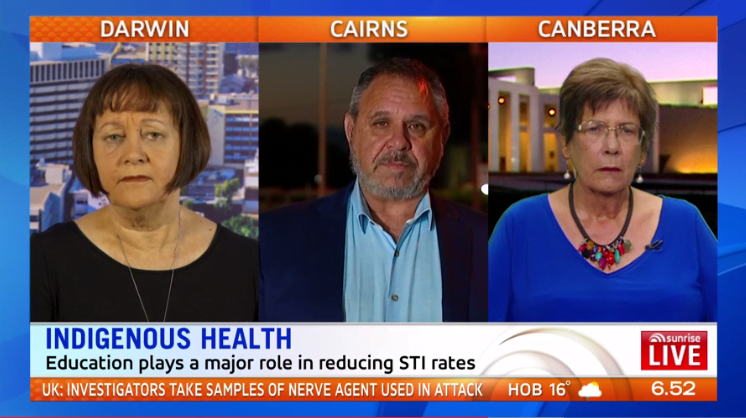 Sunrise finally shines light on Indigenous issues, but is it a real awakening (for all media)?

Media Watch declared it was “A Sunrise to forget”.

You can watch the six minute segment here.

“We’ve got to talk about it, we’ve got to do something about it,” vowed anchor David Koch at the end of the discussion that highlighted the failure of governments to listen to Indigenous health experts, problems with government funding, systemic failures in health and child protection services, lack of community control and the conflation of sexually transmitted infection (STI) figures with child abuse.

But what Sunrise apparently didn’t feel the need to discuss was its own performance, its own journalistic standards, and the distress unleashed by last week’s ignorant and ill-informed discussion between Sunrise co-anchor Samantha Armytage and white shockjock commentators Prue MacSween and Ben Davis.

Armytage was no objective player or considered/informed moderator in the session, opening the two-minute ‘Hot Topic’ with: “Post-Stolen Generations there’s been this huge move to leave Aboriginal children where they are, even if they’re being neglected in their own families…”

(See the bottom of the post for important reading on the placement of Indigenous children in out of home care from Victoria’s Commissioner for Aboriginal Children).

Thus it took just a minute for MacSween to follow this premise to declare it was “perhaps” time to consider a new Stolen Generation approach.

By the weekend Sunrise was clearly stung or shamed or embarrassed enough, with protesters assembling outside its studios at dawn and social media enraged, to finally do what it should have in the beginning, and invite Indigenous experts to the discussion.

But there was no mea culpa.

The show ignored the many calls for an apology, with ‘Kochie’ neatly sidestepping any culpability by referring only to how a “complex and emotional” discussion had been prompted by a newspaper report, headlined “Save Our Children”.

There was no mention of where it got it wrong, nor that it ignored three days of protests against the segment outside its Sydney studios last week, to the point of switching to a pre-recorded loop of a very quiet Martin Place for its studio backdrop on one day.

There was nothing about how, as ABC’s Media Watch revealed,  it had to take down the segment from its website because footage used to illustrate the “dangerous environment” that Indigenous children were allegedly subject to included a child getting a skin check in a film commissioned by Indigenous charity One Disease, used without permission.

It was left to Olga Havnen to have to interject at the end:

“What we need is intelligent informed discussions and looking for solutions rather than the confected outrage and anger.”

Kochie should have picked up on Olga’s comment, and asked (at least himself if not out loud) if there is any place in 2018 for a segment like ‘Hot Topic,’ where ‘social commentators’ are trotted out to shoot from the hip on issues that are far too nuanced and sensitive to be dealt with so flippantly. And will Sunrise develop a policy of going to Indigenous experts when they want to discuss Indigenous issues?

Kochie said “Let’s work together to try and get some of those changes through. It is a real issue affecting Indigenous people around the country.”

Does he know that he and his media buddies can actually have a role in improving Indigenous health and welfare? If only they will ask the right questions of the right people instead of amplifying sensationalism and misinformation.

With that in mind, the Croakey connective has come up with a few of the questions that ‘Kochie’ could have asked the panel – and/or himself and his colleagues (because many of these are surely not questions that Aboriginal and Torres Strait Islander people must be expected to explain over and over again).

Questions Kochie could have asked

And Qs from the Croakey connective on child protection:

Reflecting on a memorable Sunrise

Thanks to Pat Turner and James Ward, two of the expert Indigenous panel members on Sunrise’s second effort on the issue, for their reflections and what needs to be done going forward.

In an era of fake news it was surprising that a popular breakfast news program would stop a live feed and resort to a green screen when confronted with Indigenous outrage over the comments of a few self-appointed white social media commentators from the other day.

That the Seven Network’s breakfast program Sunrise realised its mistake and offered to have a panel of three experts explain in lucid details the issues around the media storm they had generated was welcomed by NACCHO and our members.

Sunrise journalist David Koch asked well considered questions and the expert panel was able to respond in-depth regarding the removal of Indigenous children, the importance of  early intervention with increased funding for family support services and that multi-disciplinary teams should be invested in to work with Indigenous families urgently.

Unfortunately time did not permit discussion about other issues like extra resources devoted to early children’s education and the social determinants of health.

However, it should not just be about Aboriginal experts correcting the media record when the government has known about the health concerns of Aboriginal children for years: they are not listening to us and they give plenty of cash for their own pet projects. It’s time to resource our sector appropriately to reduce the numbers of children presenting in out of home care and juvenile detention as it has become a national scandal that needs to be fixed now.

It shouldn’t be occurring in this day and age to have such insensitive comments made in mainstream domains and media about Aboriginal people, even if the person making them thinks they are doing it with best intentions in mind.

I think that the arrogance in not acknowledging what had gone down in the first panel until the community protested outside Channel Seven is an issue. I think it’s very good that Channel Seven convened a new panel but maybe they wouldn’t have done that if it that pressure wasn’t applied.

What should be occurring from here on is recruiting a panel of Aboriginal experts so that they call on these if they want to discuss Aboriginal issues. They should be convening an Aboriginal panel with expertise in the content matter and that way non-Indigenous Australians will have a broader exposure to the issues on the ground rather than through the few who are called in to talk about issues they have no expertise in.

The more we can have visibility in the Australian mainstream media, the more informed the Australian population will be. Currently they are too often informed by a minority that hold polarising views for Aboriginal people. They don’t get enough expertise to talk about these complex issues in Aboriginal health and they need to do it much more regularly.”

“Mopping up the mess”

The trouble is, of course, the Sunrise segment is no isolated example, but reflects ongoing, broader issues about representation and racism in the media and widespread media practices that harm the health, wellbeing and lives of Aboriginal and Torres Strait Islander people.

They not only promote racist stereotypes but also divert the public spotlight from failures in government policies and processes, and consume the focus and energy of Aboriginal and Torres Strait Islander people, communities, and organisations.

“Black people had to do a lot of work last week and it wasn’t even Invasion Day, Sorry Day, or NAIDOC Week,” said University of Queensland senior lecturer, Dr Chelsea Bond, an Aboriginal (Munanjahli) and South Sea Islander Australian, in this must-read piece at IndigenousX.

The implications of that also came out, she wrote, at a session she chaired last week at Converge, a First Nations National Media Conference.

Turns out the dilemma for First Nations news media is deciding how much of their little resources is exhausted on mopping up the mess created by mainstream news media and how much is invested in taking charge of the narrative and producing real Indigenous news content that has context and relevance to a local and/or national audience.

Indigenous journalist Amy McQuire also had a revealing anecdote in her IndigenousX article: Spare us your false outrage.

She remembered being outside Parliament House in Canberra in 2015, on the day of the Abbott-Turnbull leadership spill, when Armytage and all the other mainstream TV stations were broadcasting live, with an unanticipated backdrop.

In a protest planned for months, Grandmothers Against Removals campaigners had come to Canberra from across the country to draw attention to skyrocketing rates of Aboriginal child removal. McQuire wrote:

The response from ‘journalists’ Armytage and David Koch was worse than silence. In one of the ad breaks, they turned around and admonished those who had assembled behind them. Rather than listen to their stories, rather than hearing about their children, they castigated them for daring to interrupt their broadcast. As Armytage ‘tsked tsked’, Koch told them to look at the charities he donated to before addressing him.

Some other things (than Sunrise) to watch:

Which TV station will be first to take up James Ward’s challenge to set up a panel of Aboriginal experts so that they call on these if they want to discuss Aboriginal and Torres Strait Islander issues?

How will Sunrise handle its next complex Indigenous issue?

What can the wider public health field can learn from Indigenous resistance, activism and critique/demolition of mainstream narratives?

And what will the wider mainstream media learn from Sunrise’s awakening?

The early signs may not be good, judging from this tweet. 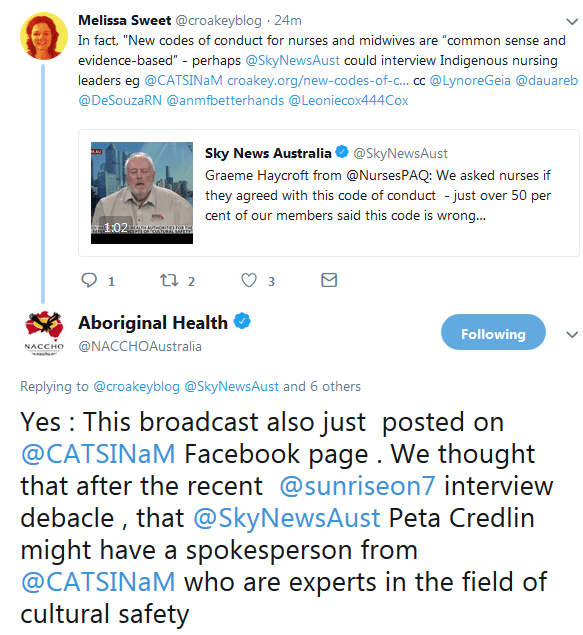 Statements on the alleged sexual assault of a two-year-old Aboriginal child in Tennant Creek and broader issues on child protection from the Healing Foundation, SNAIC, and Aboriginal and Torres Strait Islander Social Justice Commissioner June Oscar.

Our Kids Belong with Family: by Rarriwuy Hick and Meyne Wyatt – Meanjin

From the Victorian Commission for Aboriginal Children and Young People:

In the child’s best interests: Systemic review of the Victorian child protection system’s compliance with the Aboriginal Child Placement Principle

Always was, always will be Koori children: Investigation into the circumstances of Aboriginal children and young people in out-of-home care in Victoria 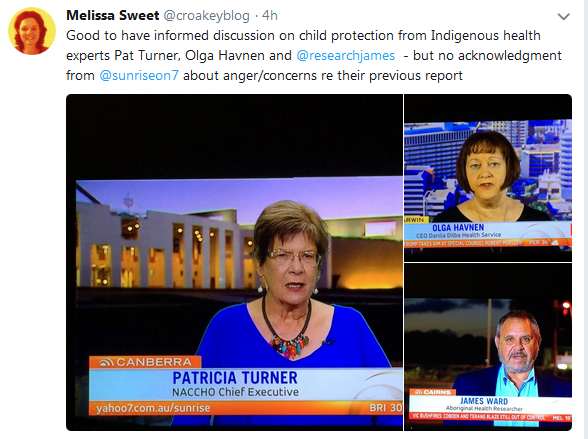 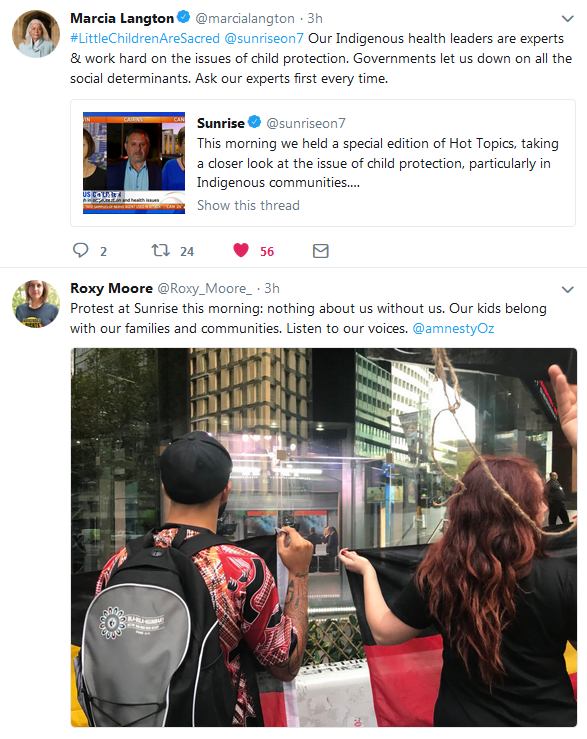 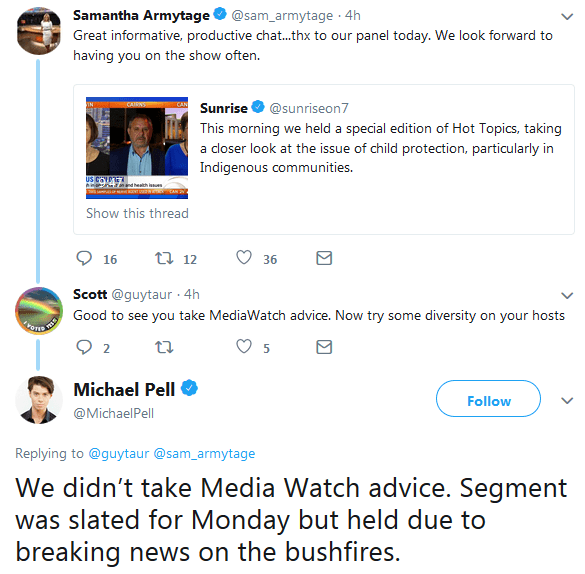 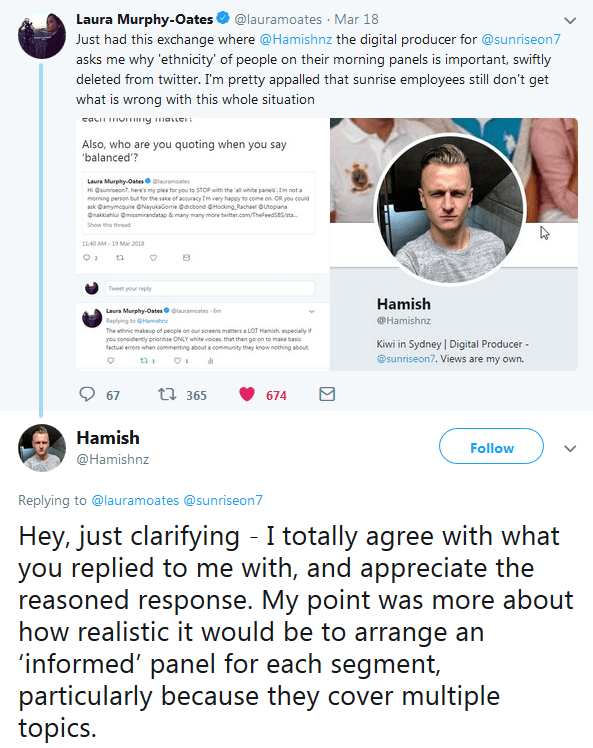 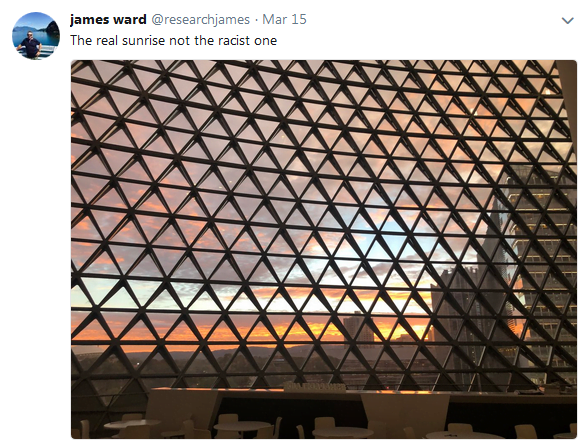