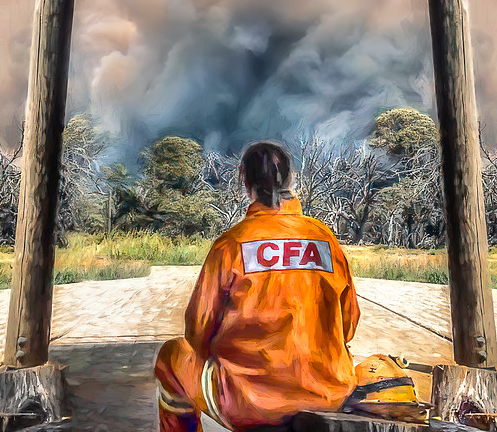 Edited screenshot of photo supplied by Jacob Carracher and Daniel Sundah. See the full image at the bottom of the post.

Supporting the well-being of volunteers on the bushfire frontlines

Introduction by Croakey: Heavy rains have brought relief to many areas across Australia, extinguishing bushfires that have devastated and threatened exhausted communities and bringing hope to those who have endured long-term drought. 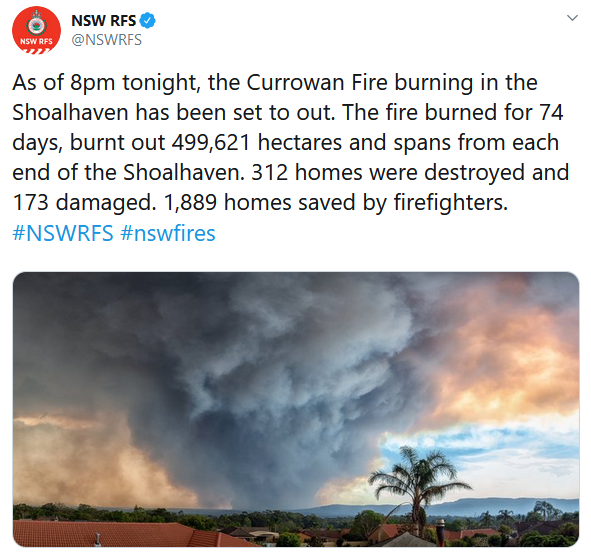 Guardian Australia on Tuesday reported that the rainfall may have relieved immediate water security issues in as many as 20 towns in New South Wales, though some have missed out and remain in critical need.

But the rains have also caused further chaos in some regions, with flash flooding and wild winds, imposing new demands on emergency personnel and volunteers.

As the bushfire crisis eases and attention turns to the financial repercussions of this unprecedented summer of bushfires (compounded by the impact of the coronavirus outbreak), Associate Professor Erin Smith urges in the article below for a strong and considered focus on the wellbeing of those who have volunteered on the frontlines, many for for weeks and months.

Smith is Course Coordinator at the School of Medical and Health Sciences at Edith Cowan University.

As the smoke clears, the direct impact of these bushfires is becoming apparent. An area three times larger than the Amazon has been destroyed – and some fires continue to burn. At least 34 people have died and hundreds of thousands more are displaced from their homes. Over one billion animals have been killed and some endangered species may have been driven to extinction.

For those who responded, including thousands of volunteers, the psychological trauma can remain long after the physical scars have faded from the land.

Volunteers are “the glue”

Volunteers are pivotal to mounting an effective and sustainable response to a disaster on a scale such as this – they provide “the glue” that’s needed to support response capacity and empower communities in relief and recovery.

Since July 2019, thousands of volunteers have been deployed into disaster-affected communities across Australia. Some do an incredible job fighting the fires, repairing the damage, or distributing food, water and other essential supplies. Others play important roles in caring for the well-being of people impacted by the fires by providing immediate relief and psychological first aid.

No matter the type of role, volunteering during a disaster can take a toll.

Put on your own oxygen mask first, before helping others…”

The role of volunteers in emergency and disaster response is becoming increasingly complex. Volunteers from many organisations are exposed to trauma, loss, devastation, injury and even death. They may find themselves comforting colleagues, friends, and survivors in the initial phases of shock and grief, or even trying to save communities in which they live and work.

They work long hours in challenging environments, often without respite and with very little opportunity for rest. They often end up exhausted and emotionally drained.

They put aside their own needs for the greater good of the community, and at the end of the day, they may feel like their concerns or needs are not as important as the needs of those they are meant to be helping.

And as members of affected communities, many volunteers often work close to home and experience the same losses and grief within their own families and social networks as the communities they are meant to be supporting.

Basic training or being part of a psychological first aid response team is not enough to prepare volunteers for these types of complex emotional experiences – especially when many volunteers are sent into distressing environments with minimal independent pre-assessment ensuring they are psychologically and medically able to cope with this type of role.

What can we do to help?

There are things that all volunteer reliant-organisations can do to help support well-being. Some simple measures include:

It is also really important for volunteers to be able to recognise when they are struggling or feeling burnt out. While “duty calls” loudly for most volunteers, there are times when stepping back can be the bravest and most resilient action to take.

And it’s an action that organisations need to actively assist volunteers in making.

The number of back-to-back days on deployment and sequential shifts that volunteers undertake needs active monitoring. We also need to have processes in place for the well-meaning volunteers who have dedicated incredibly generous periods of their lives to organisations and their communities, but perhaps are now best suited to roles other than emergency deployments.

“Firefighters were full of energy but as the weeks and months dragged on they reached a point of having nothing in the tank”.

While organisations need to do more in to facilitate programs and resources to support volunteer well-being, anyone can create informal well-being support networks. Whether it’s within our friendship groups, community groups, sporting groups, or other networks, there just needs to be an underlying thread of commitment to each other’s well-being.

As we continue to deal with this bushfire disaster, ensuring that our thousands of Australian volunteers feel supported will make a significant difference to their well-being. Their contribution to our communities is immeasurable and we must never take them for granted.

And you can always consider volunteering in your local community to help support the long recovery process ahead. Some organisations are taking spontaneous emergency volunteer registrations now. Consider registering your support with your local State/Territory peak body where possible.

You can find more information here.

Bookmark this link to track Croakey’s coverage of the bushfire crisis.