Surfs up – but watch your eyes! 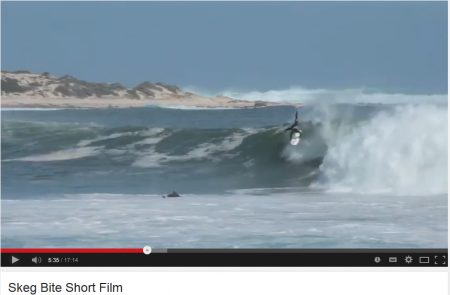 Growing up with five wave-riding brothers, spending every summer holiday at surf beaches and rocking along to songs such as Echo Beach and Summer Breeze, enabled me to spend my teenage years in amongst the surfing scene.

Only recently have I actually started to ride my own board. I figured that I had watched my brothers surf for years and with their laid back style, it really didn’t look that hard…well I was somewhat mistaken. Surfing is an adrenalin fuelled sport. You need good fitness and the right combination of strength, power and endurance. I soon found out that surfing was more than just hanging around waiting for the perfect wave.

I have been lucky so far, but growing up, I saw my brothers endure many surfing injuries– lacerations, concussion, bruises and back strain. They were fortunate though, not to ever experience an eye injury. A study led by Juliette Howden from the Save Sight Institute in Sydney and published in the Medical Journal of Australia found there are an increasing number of case reports of severe surfboard related eye injuries (SREIs) and active discussion in the medical literature about the need for protective eyewear while surfing.

The research team identified that eye injuries including any eye, orbit or eyelid injury caused by a surfboard may be more frequent due to overcrowding at beaches and the streamlining of surfboard design.

Sixteen coastal and teaching hospitals in New South Wales were involved in the study. The data were collected from both the treating practitioner and the injured surfer. The medical practitioner data included a description of the injury, date of injury, visual outcome, gender and age of the patient and the site of the injury occurred. The injured surfer data included demographic information, details of the injury and its severity, details of the event during which the SREI occurred and information on the surfer’s level of experience.

Although only 10 eye injuries were reported in the study period (December 2010 – December 2011), many were serious with many multiple injuries. There was one periorbital contusion and six eyelid lacerations. There were four orbital fractures and two penetrating eye injuries resulting in loss of vision and loss of the eye in one case. There was one case of retained fibreglass foreign bodies in the orbit and one case of globe rupture sustained while surfing.

The majority of injures surfers (80%) were male and the mean age was 35.4 years. Five patients were hit by their own boards and two were hit by someone else’s board. In all four cases of SREIs caused by a patient’s own board when surfing (the fifth SREI occurred in a backyard pool), the patient was wearing a leg rope. One patient was learning to surf while six others all surfed at least once per week. None of the injured surfers reported wearing a helmet.

Despite its limitations, this is the first prospective longitudinal study of SREIs in Australia or NSW, and it has helped to describe and quantify the risk of SREIs. Accessing data on these types of injuries is critical to establish the extent of the problem so that recommendations for the use of protective eyewear and headgear while surfing and guidelines for surfboard design can be developed for the Australian context.

So the question to be answered is: Why don’t people wear helmets to surf? We wear them when we cycle ,ski and windsurf, so it would seem sensible to wear a helmet while surfing to protect the head from injury. After reading a few surfing blogs, it seems the most common causes of head injuries are the surfboard nose and fins. As one surfer commented:

“It’s not the fall that’s gonna hurt you, it’s your board.  Or somebody else’s.  And it only takes a light hit with a hunk of fiberglass to split your head or face wide open. I’ve seen it happen and it’s happened to me.  And I’m not even talking about what can happen if you get hit by a fin.  That can get really ugly.”

The other barrier appears to be maintaining the surfie image and surfers have said that wearing a helmet would make them look like a “dweeb or a kook”.

There are solutions to this problem. One small project from the Margaret River region of Western Australia saw the town’s Youth Advisory Committee get together with the local Council and a couple of pro surfers to make a short film on the dangers of surfing. The film called Skeg Byte (a skeg is a fin) highlights the importance of wearing protective gear when surfing including the use of helmets. A fabulous initiative from a regional town well known for its great surf and wines!

Another advocate, George Greenough, a surfing filmmaker and surfboard inventor from Byron Bay, has campaigned to take the sharp edges off surfboards to reduce the risk of a penetrating injury. There are also modifications that can be made to the boards themselves – such as soft rubber tips that can be attached onto the tip or tail of shortboards or flexible fins made of softer material, such as urethane rubber.

In relation to personal protective gear, protective eyewear and helmets especially designed for water sports are available. The helmets are light and allow water to flow easily into and out, via plentiful holes but they do take some getting used to. Some Gath helmets also provide a retractable, shatterproof visor for eye and face protection.

The authors of the study have stated that at present there are no government regulations or recommendations about surfboard design or wearing protective eyewear or headgear while surfing. Yet it seems there are quite a few possible solutions. Surfing will continue to be a sport enjoyed by many but with the increase in serious injuries including those to the eye, surfers and the industry seem to be hesitant to use or actively promote protective equipment. Maybe it’s time we get more serious about promoting such safety measures to the surfing community in order to help prevent orbital and ocular injury.

I’m off for a surf now – with my helmet!