Tackle racism in schools – amongst other things, it might boost Indigenous children’s attendance

Prime Minister Tony Abbott has declared that getting children to school is his “highest priority” in Indigenous affairs and it’s one that most agree is vital.

But research is showing he may need to look beyond current policies that are focused on encouraging or punishing parents or sending students off to boarding school, and that some of these policies – like welfare penalties  – may exacerbate disengagement.

And with an associated commitment to closing the gap in Indigenous health outcomes, it was clear from a symposium in Melbourne last week that his Government will also need to look at growing evidence about the impact of racism on child health and education. 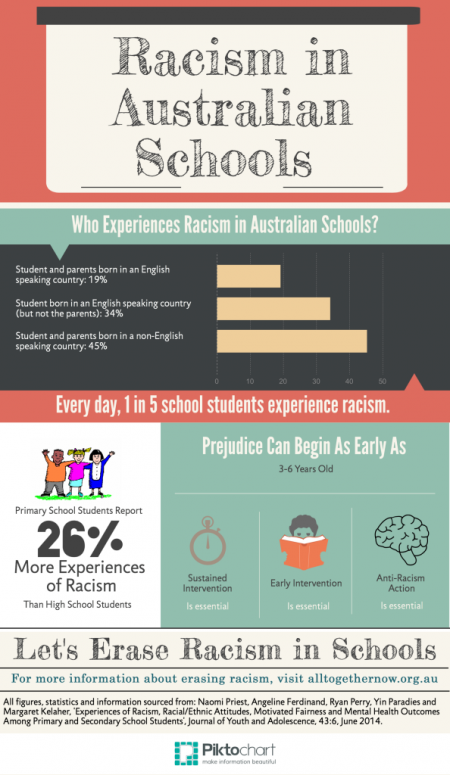 A survey released at the symposium had some worrying insights about both prevalence and experience of racism in schools, including that one in five primary and high school students who were part of a trial community intervention in Victoria said they were targets of racism at school on a daily basis. One third reported racist experiences at least every month.

The most common racist experience was being told they do not belong in Australia, followed by being left out of play or group work, being spat on, pushed or hit, and being excluded by a teacher. 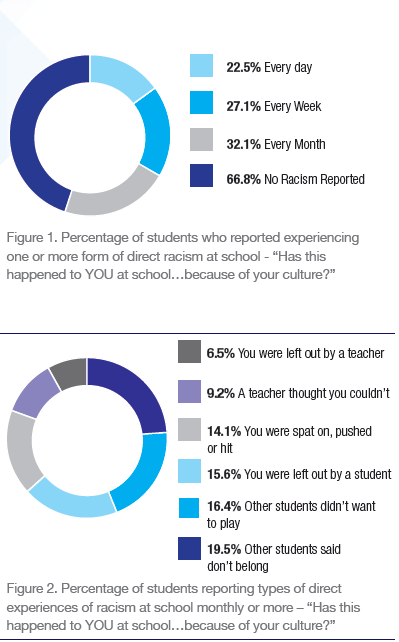 The findings come from a benchmarking survey of 264 young people aged eight to 17 years in 2011 across seven schools, funded by VicHealth as part of its three year Localities Embracing and Accepting Diversity (LEAD) project, which trialled a range of anti-racism interventions across two local government areas, including in schools and businesses. Read the full report.

Releasing the results, VicHealth warned the prevalence of racism may actually be much higher in schools than this latest survey shows, with far more students reporting that they had witnessed racism directed at someone else every day, and more than two-thirds saying they have seen another student being teased because of their cultural background at least once a month.

Just as alarming in terms of predicting loneliness and sadness were the low number of positive responses from students when asked their perceptions on whether people from other cultural backgrounds were “good”, “honest”,  “nice/kind”, “smart/intelligent” (see below).

The children’s experiences contrasted with the views of 444 school staff members who reported mostly positive attitudes about their schools’ environments and efforts to create a pro-diversity culture.

She said the results strongly supported the need for effective school-based interventions to prevent race-based discrimination, and for it to include training for staff. She said.

“It would appear that school staff may not be fully aware of the discriminatory behaviour being perpetuated at school. I think we’ve got some work to do to support children to be able to talk to teachers.

To foster intercultural understanding in schools we have to work with all students not just minority groups. It’s important to build cultural knowledge but we have to move beyond learning about the cultural ‘other’ and learn critical awareness of our own identity and how we relate to other people, in order to challenge stereotypes and assumptions.”

Priest said we also need improved data: “For example, surveys often ask students about experiences of bullying but not why.”

To this end, in the latest ARC Linkage grants announced on Friday, Priest was awarded funding in partnership with Victorian and New South Wales Education Departments and the Australian Human Rights Commission to support schools to develop proactive bystander action for racial bullying and racism in schools.

How racism might affect school attendance by Aboriginal and Torres Strait Islander students is also part of research being done by Nicholas Biddle, a Fellow at the Centre for Aboriginal Economic Policy Research (CAEPR) at the Australian National University (ANU).

He told the symposium there is strong justification for the Federal Government’s focus on school attendance as a key priority of its Indigenous affairs agenda.

But, he said, there is a risk that policies won’t work if they overlook the “agency” of children in the decision and warned that there is no convincing evidence of the benefits of sending them off via scholarships to boarding or private schools.

Government policies could also exacerbate the problem if the threat of withdrawing welfare benefits for families whose children don’t go to school adds to stress and cognitive load which is related in the first place to their disengagement, he said.

Biddle said: “A lot of government policies are about changing people’s behaviour; we need to make sure those policy designs are effective and don’t have negative unintended consequences.”

Research by Dr Gawaian Bodkin-Andrews from Macquarie University’s Warawara Department of Indigenous Education has also shown that racism is strongly related to higher levels of disengagement and lower aspirations and achievement among Aboriginal and Torres Strait Islander students.

His concern is that Western notions of ‘self help’ may not work as well with Indigenous students, and may actually make them more vulnerable to the impact of racism.

This has led to the Bubalamai Bawa Gumada (‘Healing the Wounds of the Heart’) project which sought to capture the voices of respected Aboriginal community members and Aboriginal Elders about their experiences and understanding of racism and offer advice to future generations.

Six themes emerged from their insights, he said: 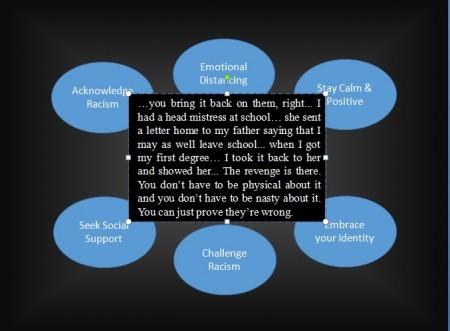 “What we’re counselling against is a sole reliance on Western-based therapies and understandings of psychology etc when it comes to building resilience in Aboriginal and Torres Strait Islander students,” he said.

“We’re not saying they’re maladaptive or bad, but they may not be as good as we think they are,” he said, pointing to another project, the Aboriginal Girls Circle that captured definitions of identity from an Aboriginal perspective.

“Our message is: if you’re a school counsellor or a teacher, don’t just rely on textbook programs: don’t be afraid to talk to representatives of the Aboriginal community and Aboriginal students. They may have insights that have been missed by Western research or education.”

One recent theory-driven program in Sydney has delivered promising results in reducing intergroup bias, with a long-term impact – positive results sustained over a 12 month period – and as a pointer to how schools and teachers could reduce racism and discrimination via the curriculum.

Psychology Professor Fiona White from Sydney University said the Dual Identity Electronic (E-contact) (DIEC) project involved 92 Catholic and 96 Muslim students from segregated schools in an semester-long program about how their respective religions could be integrated to develop a water saving, energy saving or recycling solution for Australia.

“What I found was by having these theory-driven social psychology interventions, you can get segregated groups of people to come into contact over the internet, using a structured curriculum, and change their attitudes to each other, and have them stay improved at a 12 month follow-up.”

It was, White told the symposium, the first longitudinal experimental study to use a synchronous internet chat tool to foster a dual identity among students  – helping to build a common national identity of an environmentally sustainable Australia, while retaining their religious identities.

“That’s a nice aspect of dual identity: no one is ever asked to relinquish who they are,” she said.

The program created some great exchanges, such as: 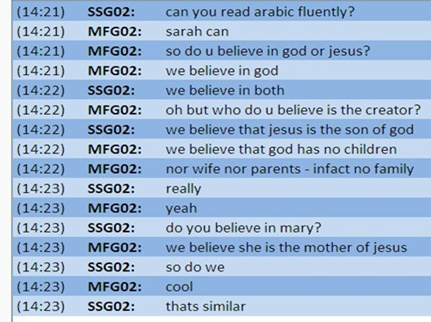 White measured student’s bias, anxiety, prejudice, and general knowledge about the ‘other’ before the program began and then after the program, at two weeks, six months and 12 months intervals. 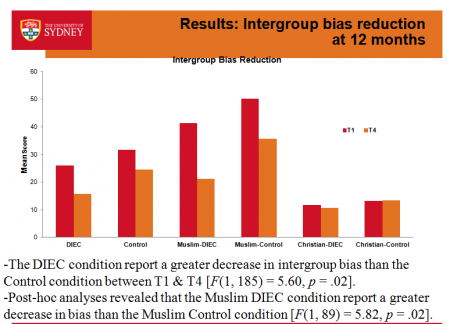 The shifts for Christian students were not so significant, but White said that reflected the more positive views they expressed about Islam at the beginning of the project, probably because they felt it was the right thing to say. She said:

“Because they reported very positive views at the beginning, it was harder to get a reduction further down the line, though I’m pretty proud the program still shifted them at 12 months.

But what DIEC and future research needs is to measure intergroup attitudes in an automatic sense where people can’t exert their control over their attitudes, such as an Implicit Association Test that measures your millisecond responses to others.”

White says she does a lot of minority/majority research and consistently finds that minority groups report greater negative attitudes to the majority rather than vice versa. She said:

“I guess it’s because they’re more honest and less concerned about socially desirable responses, or what looks better.

But it also might be that minorities have internalised being targets of discrimination and therefore are reacting more negatively to being the targets. Those explanations need to be unpacked and unravelled.”

White says there are important social policy implications from the DIEC project, including equipping high school students with the understanding, skills and strategies to challenge negative media portrayals of minority groups.

Ultimately, these sorts of programs could become part of school curricula. She said:

“It brings together curriculum topics like an environmentally sustainable Australia with anti prejudice work which schools are committed to.

Many teachers don’t have the confidence to broach issues about prejudice or bias in case they say the wrong thing, but they could be skilled up to do this sort of work.”

• The Croakey Conference Reporting Service coverage of the symposium is compiled here. This final comment concludes the coverage.