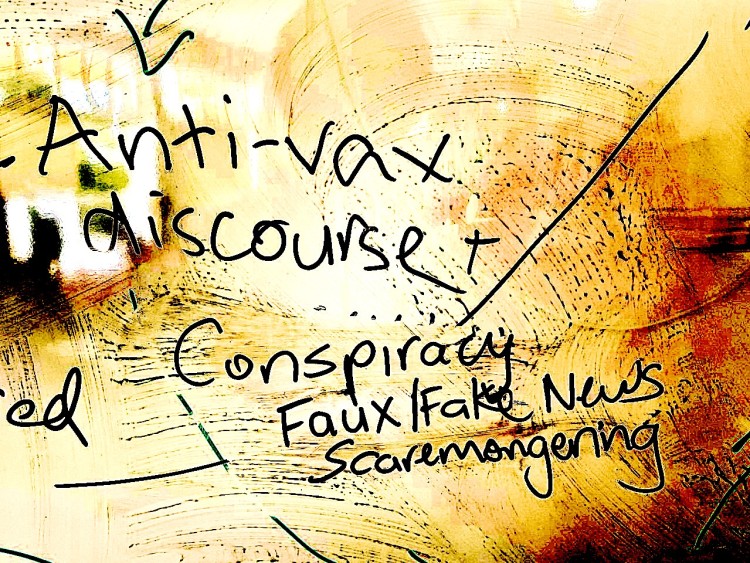 The article below, by Professor Bronwyn Fredericks, Dr Abraham Bradfield, Professor James Ward, Dr Sue McAvoy, Dr Shea Spierings, Troy Combo and Agnes Toth-Peter from the University of Queensland, is based upon the publication in the M/C Journal.

Throughout the COVID-19 pandemic, and its fluctuating waves of infections and the emergence of new variants, Indigenous populations in Australia and worldwide have remained at high risk.

As COVID-19 spreads, preventative measures and vaccinations have never been so important. Vaccination rates in some Indigenous communities, however, remain low with hesitancy coinciding with the spread of misinformation and amplification of conspiracy theories.

A 2021 study conducted at the University of Queensland (UQ) has mapped some of the risk and protective measures that influence responses to COVID-19. Amongst the findings was that an inherent mistrust of mainstream authorities exist in some communities and that this increases the chance of some community members seeking, encountering, or basing their actions on unverified sources of information.

Colonisation was, and still is, an ongoing process that impacts Indigenous peoples in different regions, in different ways.

The failure of settler-nations to confront and address ongoing colonial violence based on an ethos of “white possession” have contributed to national silences that fuel some Indigenous people’s mistrust in the governing authorities.

Everyday lived experiences with racism, stereotypes, intergenerational harm, and maltreatment within the health system can correlate with a person’s receptivity to conspiracy theories. Explanations for vaccine hesitancy cannot be removed from the context of colonial disempowerment. 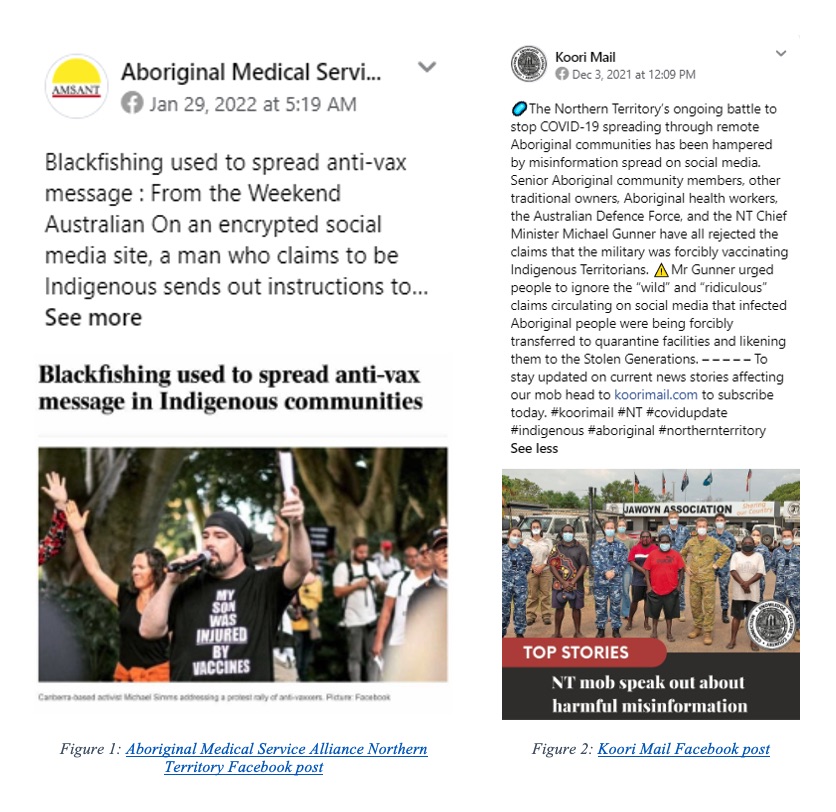 The spread of conspiracy in Indigenous communities

Since the outbreak of COVID-19, numerous conspiracies have emerged and gained momentum in some Aboriginal communities. Some of the documented cases are:

False associations such as these not only impacts vaccine hesitancy but resurface trauma by trivialising past lived experiences and falsifying narratives for a racialised agenda. 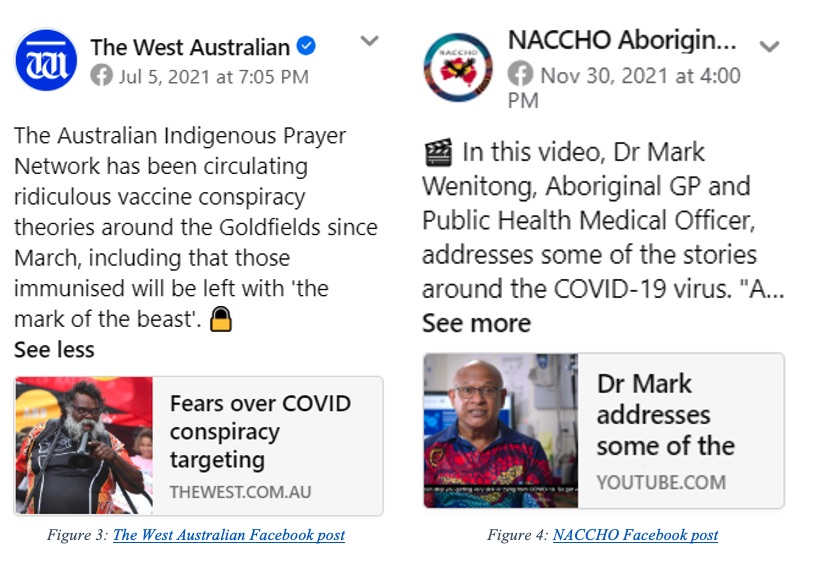 Taming the beast of misinformation

Indigenous peoples have long been aware of the risks of pandemics and were quick to implement the measures necessary to ensure the safety of their communities. In September 2021, NACCHO organised a meeting with 14 Aboriginal church leaders to discuss the spread of misinformation. National Cabinet also met in January 2022 to discuss the ongoing problem.

Chief Executive of the Mallee District Aboriginal Services in Victoria, Jacki Turfrey, has called for more targeted responses to address and dispel each of the myths circulating. Principle 8 of the Roadmap to Recovery refers to the need to counter misinformation through increasing transparency, and in doing so, preventing “information gaps” being filled by conspiracy theories.

While social media networks have abetted the spread of misinformation, they have also highlighted Indigenous peoples’ strength and provided many with access to information via trusted sources that counter and refute misinformation and/or anxieties associated with dominant heath advice and messaging. The Ampilatwatja community, for example, translated health messaging into culturally appropriate terms making it not only linguistically comprehensive but placing it within a familiar lived context.

Organisations such as Why Warriors have also applied an informed cross-cultural methodology to providing accessible information that empowers Aboriginal communities to make informed decisions. The organisation has observed that there is a “great desire” for in-depth scientific knowledge pertaining to the virus within Aboriginal communities; however, this is not always accessible due to language and cross-cultural barriers. 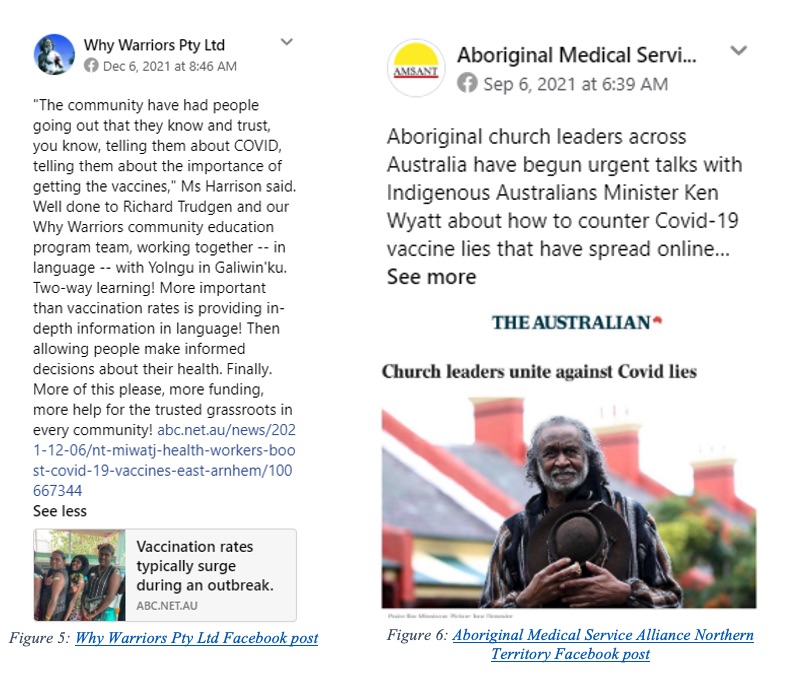 Co-designed Indigenous-led partnerships between governments (policymakers) and Indigenous communities are critical in ensuring that community leaders, organisations, and frontline workers are adequately resourced so that health literacy can be improved as a protective strategy.

The Stakeholders who took part in UQ’s study identified several touchpoints where interventions could help counter the spread of misinformation. These include:

The word “conspire” derives from Latin meaning to “breath together”. Only when health systems breathe with Indigenous peoples may the burden of the so-called Beast be overcome, and Indigenous and non-Indigenous peoples can collectively conspire towards equitable health outcomes.

The references for this article can be seen here.

PrevPreviousPushing a barrow uphill: health and aged care miss out in the Budget cash splash
NextOn the Federal Budget and mental health: the path forward is there but it hasn’t been takenNext