Tackling dementia in Aboriginal and Torres Strait Islander communities: a personal story of loss and transformation

The challenges of dementia for Aboriginal and Torres Strait Islander families and communities were highlighted in a powerful and deeply personal presentation to the recent Closing the Credibility Gap symposium in Melbourne.

The symposium also heard of a range of resources available to help people find relevant information and resources, reports Marie McInerney, a journalist who is providing a series of reports out of the Symposium for the Croakey Conference Reporting Service. 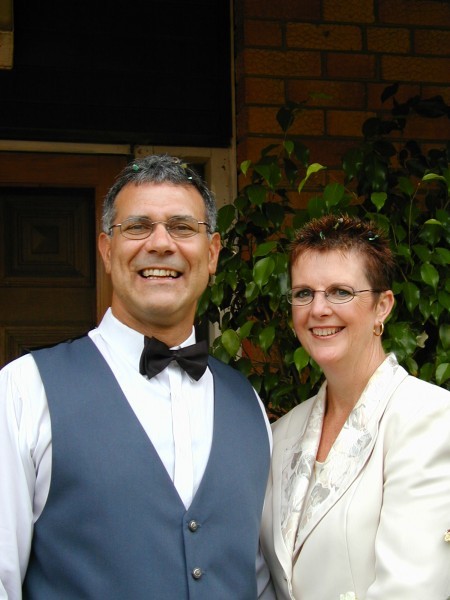 It took two years of research and testing before Fred Tanner’s wife Deb was finally diagnosed with early onset dementia at the age of 52 – a diagnosis that brought both certainty and grief: “It was a death sentence,” he says quietly.

Sitting in the car outside her doctor’s rooms, his first response was: ‘Why? Why us? Why my wife?’ Then the anger, grief and frustration gave way to fear and uncertainty. ‘What am I going to do? How do we get help? Who do we get to help? What sort of help do we need?’

Those questions and many others have taken him on a long journey until her untimely death in June this year that has, he said, transformed his own life.

Now, as he told the recent Closing the Credibility Gap symposium in Melbourne, his task is to ask such questions for others, as chair of the National Aboriginal Torres Strait Islander Dementia Advisory group to Alzheimer’s Australia.

“The fact that I can stand here today when my wife passed away in June, six years after she was diagnosed, is testament to the friends we have and the support we could access,” he said. “I have a lot more knowledge and understanding around dignity of care, quality of care, love and responsibility – not in trying to define it, but what it is that I can practically do.”

In an address which brought many in the audience to tears, Tanner – who is of Arabunna, Southern Arrernte and Yankunytjatjara descent – talked about how his very active, healthy Irish wife started forgetting to do things at work, making a cup of tea when she already had one, letting her desk become untidy.

“She was aware of those things, I wasn’t,” he said. “What I was aware of was her vision….she wouldn’t be able to see people on the periphery, would have to turn straight on to look. And with her driving…sometimes I had to go for the handbrake, it got a bit scary.

“That started the journey I’m still on.”

It was often scary, he said. In the early days, her vision and balance affected, she would wake up in the night, “go for a walk and bump into things”.

As the condition escalated, “she would have seizures, like clockwork, around 3am every night. Some would last 30 seconds, one lasted three and a half hours. There was four years of that, every night.”

Tanner said he put into action both his training as a lawyer and experience as a senior South Australian public servant, trawling the internet to explain her symptoms, including through a range of diagnostic tools:

The search then shifted to finding more about what dementia is and who and what might help. He tapped into the expertise and support of friends and family who worked in health or related services, and, as Deb’s health deteriorated, used his negotiating skills as a lawyer to get the best possible treatment and support, whether for medication and testing or respite care.

“I have professional health people who are my friends, who stay in touch, see how I’m going, look after me. I was able to negotiate support for looking after Deb, I can get up and argue, I can research what’s available and what’s needed, I can argue for support.”

Imagine, he invited the audience, how hard that task would be for  Aboriginal and Torres Strait Islander carers and communities where language is an issue, who can’t tap into the skills learnt through a law degree or professional networks – much less a computer – to first obtain a good diagnosis and then ensure the best support and treatment?

Imagine how hard it would be to have dementia or care for someone who does when you live in crowded, unsafe conditions, or for families who can’t afford respite care or negotiate flexibility at work so they can maintain their job, as he could?

Imagine living in remote areas like the APY (Anangu Pitjantjatjara Yankunytjatjara) Lands where the nearest hospital is an eight or nine hour drive.

And imagine the ripple effect in communities, where so many Elders who are at risk of dementia have, as the National Aboriginal and Torres Strait Islander Health Plan notes, “caring responsibilities, sometimes of multiple generations”.

The urgency to address these risks is growing as Aboriginal dementia rates do. These are already high: the Koori Growing Old Well study in New South Wales revealed that Aboriginal and Torres Strait Islander people are three times more likely to suffer dementia.

Worse still were the findings, with some caveats, of the Dementia and Cognitive Impairment in Kimberley Indigenous Australians’ project that the prevalence of dementia among Aboriginal people in the remote region aged over 45 years was 12.4 per cent, compared to a generate rate of 2.6 per cent in the Australian population – five times higher.

A further survey, Tanner said, in northern Queensland found that 20 per cent of Aboriginal and Torres Strait Islander people over 65 years had dementia.

To address these growing rates, he sees as priorities:

To support the first priority, he said Alzheimer’s Australia will early next year launch its first promotions DVD with a specific Aboriginal and Torres Strait Islander focus as part of its ‘My Brain Matters’ resources and featuring a number of high profile people who he can’t yet identify.

In the meantime, he points to a range of valuable resources, including The Fading Moon DVD, which features the personal stories of carers of people with dementia, including his own.

See the Advisory Group website for how to order a copy and for many other resources including:

You can track Croakey’s coverage of the Closing the Credibility Gap symposium here.