Tackling racism in health care: it requires some self-reflection

Thanks to Twitter, I recently came across this fascinating presentation giving medical students some insights into the historical forces that shape contemporary Indigenous health and wellbeing.

In the presentation, Dr Geoff Spurling, a lecturer at the University of Queensland and a GP at the Inala Indigenous Health Service, encourages medical students (and it’s useful advice more widely) to consider their own back-stories in order to better understand the intergenerational impact of colonial history.

To tackle racism, first understand the history of privilege

Aboriginal clients of the Inala Indigenous Health Service tell me they can sniff a racist attitude at a health service from miles away. Once they get that sniff, they’re gone. “I’ll never go back,” they say. It’s a survival instinct.

What can we do to tackle racist attitudes within health services when giving a half-hour presentation to medical students?

Brenda Beagan, a Canadian researcher, says teaching cultural diversity to medical students can be harmful through reinforcement of stereotypes if it is solely about providing information about the other culture without first understanding your own culture. (Beagan 2003)

In addressing this concern, my main argument to medical students is that they can’t appreciate Indigenous intergenerational trauma without first acknowledging their own intergenerational success and privilege.

My parents met on Turrball country at the University of Queensland in 1969 where they both obtained their degrees and secured our family’s future on this educational bedrock.

Dad was born in England and came to Australia when he was two. My mother’s parents came from Bundaberg where they settled in the 1940s and ran a successful sugar farm on the north side of town.

While investigating Bundaberg’s history, I came across some very unsettling articles. One event, occurring approximately 70 years before my grandfather’s birth, set the scene for a prosperous local sugar industry.

Arthur Laurie, a former vice-president of the Historical Society of Queensland, describes the 1850 “Blaxland” tragedy. This was actually a massacre of up to 1000 Aboriginal people at Paddy’s island, less than ten km away from my grandfather’s farm. One consequence of this massacre noted by Laurie was:

“This attack really broke the power of the blacks in this region. They continued to be hostile often in individual cases, but were never afterwards a serious menace.”(Laurie 1952)

My maternal grandfather was in no way responsible for this massacre but he certainly benefited from it. His wealth obtained from what used to be Aboriginal land combined with his progressive attitudes to educating his daughters led to their successes and in turn became the foundation for my own success at university at medical school. I hope this success will flow on to my twin daughters who (presently) unquestioningly accept that they will be going to university after school.

My grandfather’s success was also based on an introduced crop. Sugar cane is native to Eurasia, a continent that Jared Diamond argues had a wealth of crops and herdable animals amenable to agriculture. This led to the development of cities and then steel and guns, important tools of colonisers. (Diamond J 1997)

He argues that this is one of the main reasons why there was not an Aboriginal or Torres Strait Islander version of Captain Cook who sailed across the world to colonise England. Indeed, if you go into a major supermarket in Australia today, it is hard to find food native to Australia. It is not like the Europeans came and showed the Aboriginal and Torres Strait Islander peoples how to farm native Australian crops and animals. European colonial success in Australia was built on imported, domesticated crops and animals.

For me, this book went a long way to undoing years of schooling where we were taught to be in awe of “pioneering” white explorers, learning nothing about Aboriginal nor Torres Strait Islander history. This lack of education about Aboriginal lands inspired me to use prezi, presenting software that allows you to zoom and move over a canvas. 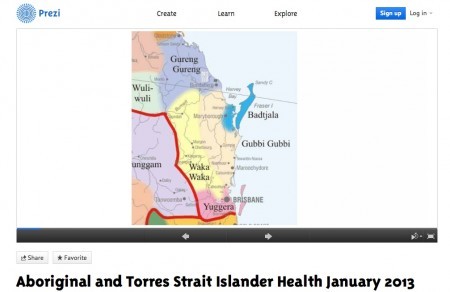 Non-Indigenous students more familiar with colonial boundaries are instead exposed to the backdrop of David Horton’s map of Aboriginal language groups in Australia. In this way the story zooms and shifts from Turrball, Jagera and Yuggera country around Brisbane where I grew up to Gureng Gureng country around Bundaberg where my mother grew up.(Spurling 2013)

I also use the prezi format to strike down the idea that Indigenous disadvantage is somehow genetic. Pierce et al. in a fascinating BMJ article state that only 7% of human genetic variation is due to race and very few of these variations relate to health, skewering the thrifty gene hypothesis along the way (Pearce, Foliaki et al. 2004).

If Indigenous disadvantage can’t be explained by genetics, then how does one show medical students the complex pathway from the trauma of colonisation to the huge gap in mortality we see in 2013?

I have found an article by Professor Cindy Shannon (a Quandamooka woman from North Stradbroke Island) on acculturation to be a useful guide in illuminating the path from historical trauma, anger/ shame, low socio-economic status and chronic disease to unacceptably early mortality (Shannon 2002).

I follow this up in my prezi with the story of how Dr Noel Hayman, a Wakka Wakka man and my boss, created a centre of excellence in Inala by turning around racist attitudes and creating a culturally safe and competent primary health care service over a period of 20 years.

One of the best ways to counter these stereotypes is to work with inspiring, hard-working Aboriginal and Torres Strait Islander people. Most of us non-Indigenous Australians take our empowerment and success (often founded on what used to be Aboriginal land) for granted and this lack of reflection can also mean that we struggle to understand how intergenerational trauma and disempowerment is at the heart of Aboriginal and Torres Strait Islander disadvantage.

Helping medical students reflect on and understand their own intergenerational success can help us all understand where Aboriginal and Torres Strait Islander peoples are coming from and this is a powerful antidote to racist attitudes that pose an unacceptable barrier to health care.

PrevPreviousNDIS for under 65s: ageism or a battle over priorities?
NextHigh Sobriety: a new book sharing one journalist’s experiences with (and without) alcoholNext