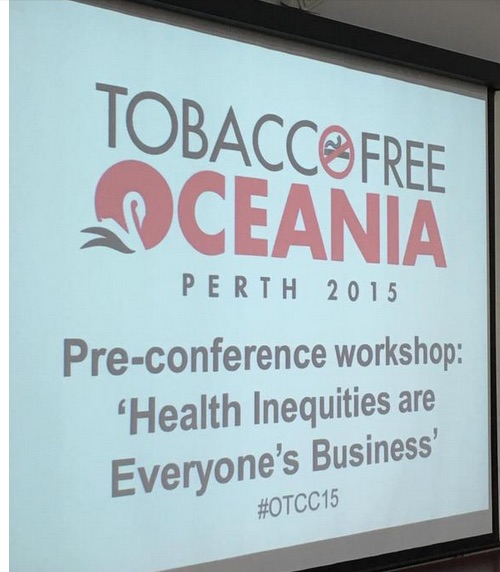 Tackling tobacco as a social justice issue: stories of success from the community 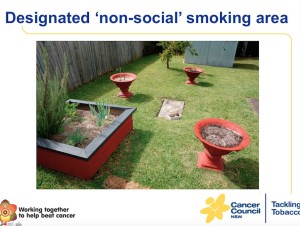 The small cement patch in the photo to the right may not look that impressive but it is a highly successful tobacco control intervention for a group of smokers regarded as among the most difficult to support to quit.

It’s in the backyard of Allum House, a small refuge in the Canterbury-Bankstown area of Sydney for 16-21 year olds experiencing or at risk of homelessness, which is a seen as a “shining light” in efforts to reframe smoking as a social justice issue.

Groups like the Allum House residents, who face disadvantage in often multiple ways and smoke at significantly higher rates than the rest of the community, were the focus yesterday of a pre-conference workshop ahead of the 2015 Oceanic Tobacco Control Conference that begins in Perth today.

Prevalence has always been higher in these groups, but the disparity has become starker over recent decades amid successful tobacco control measures in the mainstream community – graphically shown in this slide from a presentation by the University of Newcastle researcher Ashleigh Guillaumier. 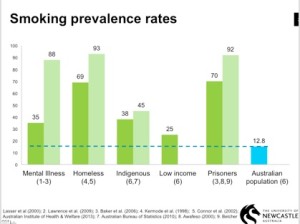 Trying to address the disparity raises a range of complex issues and arguments. 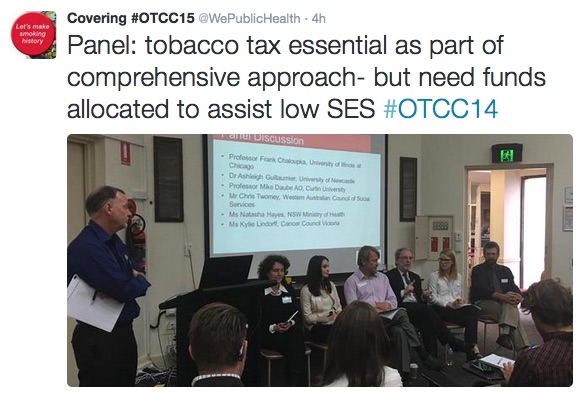 These include whether tobacco taxes are regressive or actually progressive, to the need for more accurate data (or if resources should go to health programs in target communities), and how to promote quit smoking messages to particular groups.

Croakey will report in more detail on these issues later as a number of keynote addresses and conference sessions will also address the role of disadvantage.

Cancer Council NSW senior research and evaluation analyst Rae Fry told the workshop that Allum and another community service, the Triple Care Farm, had both integrated smoking cessation support into their day-today service provision, and changed their organisational policies to create an environment that supports quitting or cutting down.

This had happened through Tackling Tobacco, a highly regarded partnership between Cancer Council NSW and not-for-profit community sector organisations.

“Tackling Tobacco sees smoking as a social justice issue, because of the huge health and economic burden of smoking for people who are already disadvantaged,” Fry said.

“Community services are well placed to do this work because they have trusting relationships with their clients, and their staff are skilled in working on difficult issues in a sensitive way.”

It’s been an area, at times, of tension between and within the two sectors, over whether it is fair to ask people who are already vulnerable, under pressure and often experiencing trauma to give up something that brings them comfort. The counter argument is that it is unfair not to try.

Fry said Allum residents had previously been able to smoke freely outside, but staff then noticed that many who arrived as non-smokers started to take up smoking, while others who were light smokers were leaving the service as heavy smokers.

A big reason was that smoking was very much a social activity at the refuge. Now it’s not at all. That patch of concrete is the designated smoking area.

“It’s not at all comfortable and only one person can use it at a time,” Fry said. “If other people are in the garden, they have to go inside while the smoker is having their cigarette.”

The service reports much lower levels of smoking. Fry told the story of Bridget (not her real name), who is 21 and lived at Allum House 18 months ago:

When she first arrived she was smoking 50 a day, and she was worried about only being allowed to smoke outside. But she used the patches and gum, and she said “at the end I thanked them”, because it helped her to cut down drastically.

Bridget said that when she was able to go home and live with her mum again, she asked her mum to employ some of the same things that Allum did, to give her “a little bit of extra push”, and on the day we interviewed Bridget for the case study, she’d only had two cigarettes.

The staff at the refuge believe that part of the reason young people cut down a lot when they’re there, is that the residents have self-regulated the way the smoking area is used. There’s an unwritten rule that if anyone is using the garden, they take precedence over those who want to smoke. So smokers tend to go longer between cigarettes.

As important, smoking is now part of routine case planning at the refuge. That’s also the case at Triple Care Farm, a 12 week program for young people aged 16-24 experiencing substance abuse. On arrival, 98 per cent are smokers.

Like so many services, originally staff also worried that asking residents to give up smoking while they were dealing with other drug withdrawal was “too much”, but the clincher came when the program manager saw a staff member who was pregnant surrounded by people smoking.

In 2012 it opted to go totally smoke-free. Fears that it would stop young people seeking treatment have been unrealised, and follow up data from the after care program show that 21 per cent of students described themselves as a non-smoker six months after leaving Triple Care Farm.

That’s an “amazing success rate” even for a general population of smokers, much less one that is experiencing multiple layers of disadvantage, Fry said.

When he came to Triple Care Farm he’d been a smoker for almost 10 years and was smoking 30 a day. He’d tried to quit a number of times but without success.

After 10 weeks at Triple Care Farm, Nick considered himself an ex-smoker and was down to using nicotine gum only a couple of times a week. He said it felt like an accomplishment to have “beaten that cycle of addiction” – he’d proven to himself that it was possible to quit.

An unexpected outcome has been fewer interruptions in group programs. There are no cigarette breaks, so students are completing training courses more quickly. And they have more money to spend – one student bought a birthday present for his two-year-old for the first time ever.

Taking the lead from their NSW colleagues, the Cancer Council Victoria has also been working closely with community services to address high smoking prevalence among disadvantaged people.

Senior policy advisor Sian Lloyd said the Cancer Council was “very much seen as ‘the smoking police’” when it first started to approach the community sector.

“One of the major changes has been in how we talked,” she said. “We changed to the language of the community sector organisations, to be about justice, choice and where the client was at.” See the slide below from her presentation. 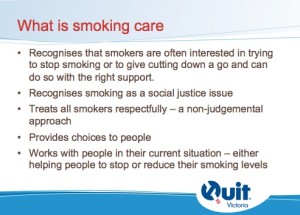 She said the aim is to embed smoking care into the routine work of community services, including making sure their intake forms ask if someone is a smoker and providing access to pharmacotherapy like nicotine replacement therapy.

Cancer Council Victoria also recognised that it needed to better tailor its own resources, acknowledging that some of its brochures were “too white, middle class”. It worked with homeless organisations and their clients, with new resources that have proven very popular with the sector, she said.

It’s an engagement that Chris Twomey, Director of Social Policy at the Western Australian Council of Social Service (WACOSS), says should be a next step for the tobacco control health community.

Twomey was involved in a number of the discussions at the workshop, particularly around the community sector’s ongoing concern about rising tobacco taxes and their impact on people who are already severely financially stressed.

But another message that emerged for him was the need to have vulnerable groups of people more involved in the design of tobacco control programs.

“Let’s learn from their lived experience, in discussing what worked for you and what didn’t,” he told Croakey.

“One of the things you learn in community sectors where we have those peer programs or people with lived experience in programs, is sometimes they are the best people to be delivering your frontline services. They know what’s it like, can engage with people, talk about the things they actually identify with.”

It’s an issue that will also emerge at the conference about efforts to reduce smoking in Aboriginal and Torres Strait Islander communities.

And from the Twitterverse 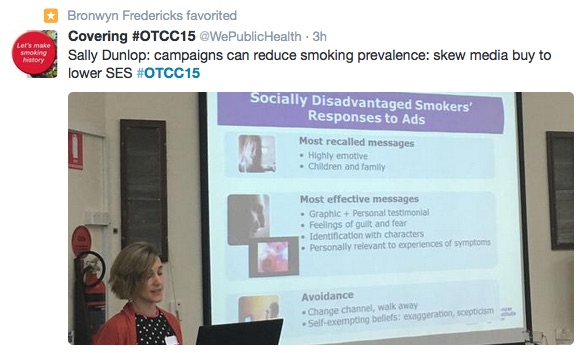 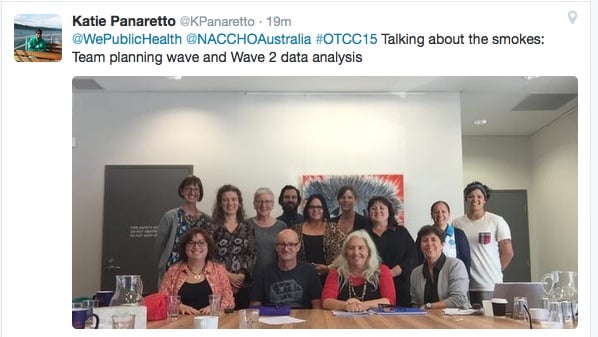 PrevPreviousInvest in communities, not prisons
NextHow Australia could help save millions of lives: export tobacco controlNext