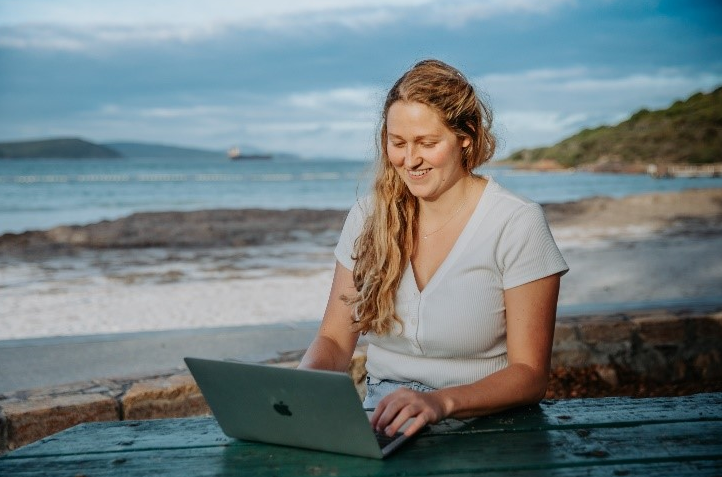 With an Albany backdrop, Dr Phoebe Thornton featured in an RANZCP promotion for more trainee psychiatrists to work in rural and regional areas

In her final report from the 2021 Congress of the Royal Australian and New Zealand College of Psychiatrists (RANZCP) in Hobart last month, Croakey journalist Dr Amy Coopes looks at workforce issues, including the launch of a ten-year Rural Psychiatry Roadmap.

This post also includes insights via Twitter on #RANZCP2021 sessions on lived experience of mental health issues in the mental health workforce and patient rights, and it wraps Croakey’s coverage with analytics from the event, which was one of the first major medical specialty events held face-to-face since the outbreak of the coronavirus pandemic.

Bookmark all the #RANZCP2021 coverage by the Croakey Conference News Service here.

Mental health care is at a crossroads in Australia, with immense appetite for and momentum towards reform, but lofty aspirations will remain out of reach without significant investment in and reimagining of the workforce, a recent summit of psychiatrists has heard.

Diversifying the mental health response workforce and shifting the training paradigm to have greater focus on rural and remote areas were some of the big-ticket items discussed at last week’s Congress of the Royal Australian and New Zealand College of Psychiatrists in Hobart.

The meeting heard from a number of eminent experts, involved in recent Productivity Commission and Victorian government inquiries into Australia’s fragmented and ailing mental health sector, on workforce challenges to care.

The College also launched its Rural Psychiatry Roadmap 2021-31 aimed at addressing marked disparities in access and outcomes for the one in five Australians who live outside major metropolitan centres.

Only six percent of all psychiatrists service this population, and the Congress heard that Australia’s very remote areas were covered by just six specialists in total. 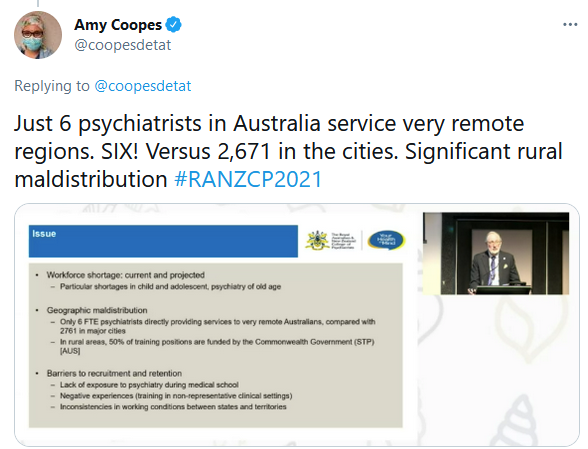 Associate Professor Mat Coleman, who authored the roadmap and formally launched it in Hobart, said access gaps translated into poorer mental health outcomes across a range of indicators for rural and remote Australians, and contributed to shorter life expectancy and higher mortality rates.

“If you’re Aboriginal, your likelihood of suiciding is about three times the general population, but if you live rural and remote it’s about six times, another doubling,” Coleman told Croakey on the sidelines of the meeting. “You’re twice as likely to have an alcohol problem just by your postcode.”

Central to the roadmap is — for the first time in psychiatry and unprecedented among specialist training programs except for general practice — an end-to-end model allowing trainees to complete all their training in a rural location.

Currently, specialist training in Australia is built on a metro-centric model where trainees are attached to a metropolitan hospital and go on secondment to rural centres, an outdated paradigm which perpetuates rural workforce shortages by having training doctors tied to the cities during their most formative years of life.

“If the system is structured so that you have to be in a capital city during those years of your life you’re more than likely to remain there, it’s a fairly simple equation,” said Coleman, who lives on a farm four and half hours outside Perth. 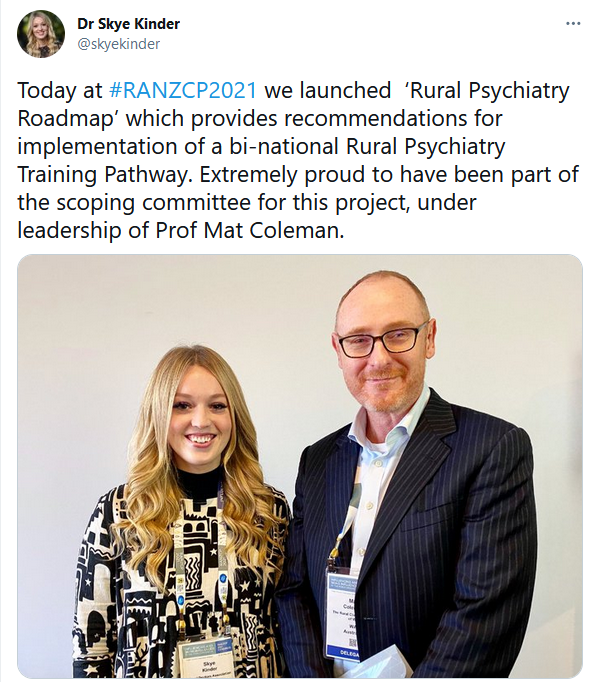 Unlike many specialist programs, which do genuinely require some, if not all, training years to be completed in a tertiary centre in order to practice niche and advanced skills, Coleman said psychiatry training could be entirely rurally provided, so long as appropriate supports and structures were in place. In an era of climate disasters, workforce demands would only become more acute.

“There are the opportunities and there’s definitely the work and the experience,” he said. “Rural communities have exactly the same sorts of problems that metropolitan people have in terms of prevalence of mental disorders.

“Sadly they do poorly in terms of suicide outcomes, substance use outcomes, and are at higher risk of the social determinants associated with mental health, but also trauma. Natural disasters tend to occur more frequently in rural communities — fires, floods, drought.”

The roadmap also proposes a host of other measures including a Diploma of Psychiatry for GPs and other generalists wanting deeper or more specialised knowledge and skills in mental health.

Similar qualifications exist in women’s and children’s health, aimed at upskilling the primary care workforce to meet demand in these areas.

The roadmap also focuses on growing the Aboriginal and Torres Strait Islander workforce, an area — along with peer workers and nurses — identified as in major shortfall by the National Mental Health Service Planning Framework.

Professor Harvey Whiteford, who was at the helm of the Framework and Productivity Commission inquiry into mental health, discussed some of the findings around workforce.

Whiteford said it wasn’t just a question of more workers, but appropriately deploying those already in the system to places of need, such as state and territory-based community ambulatory care. Lower-intensity services should play a bigger role, whereby  you could achieve the same outcomes for less cost, but were not incentivised in funding terms. 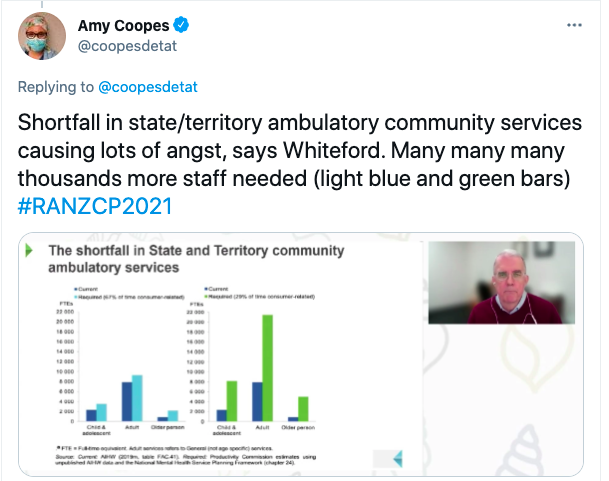 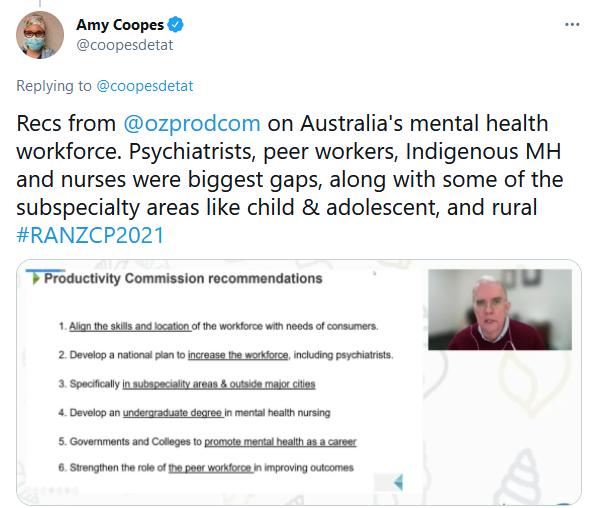 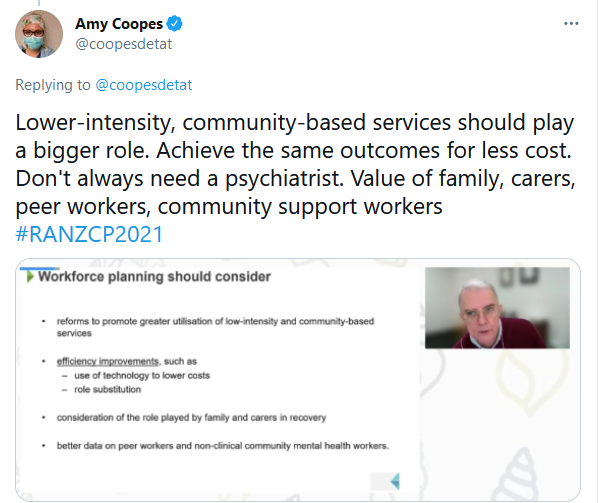 Noting that you “don’t always need a psychiatrist”, Whiteford highlighted the value of family, carers, peer workers and community support workers in these settings, though he noted that rural areas and child and adolescent mental health were also desperately strapped for specialists.

At the nursing level, Whiteford said the Productivity Commission had advocated for a midwifery-style undergraduate qualification in mental health, allowing for direct entry to mental health nursing.

Without addressing workforce concerns, Whiteford said the broader ambitions of the Productivity Commission and related Royal Commission in mental health in Victoria would never get off the ground.

A flagging system swamped by demand

Dr Alex Cockram presided over the Victorian inquiry and shared some personal reflections, saying that nothing less than broad-scale reform was expected by consumers given the extent of failings documented by successive inquiries into the mental health system.

There was an appetite, too, from workers themselves, labouring under the moral injury of short-term medical models of care, in a flagging system swamped by demand, she said. 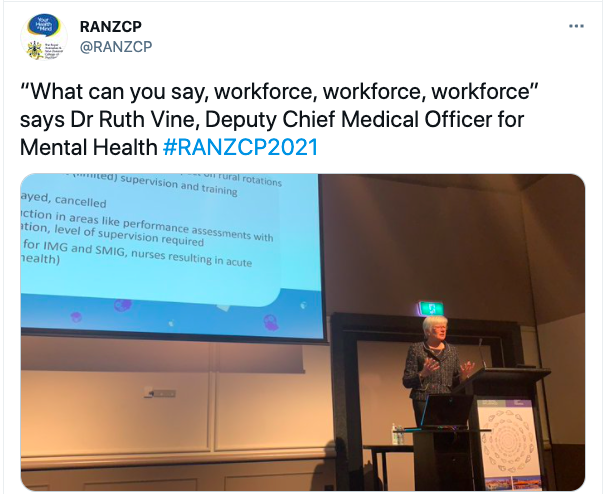 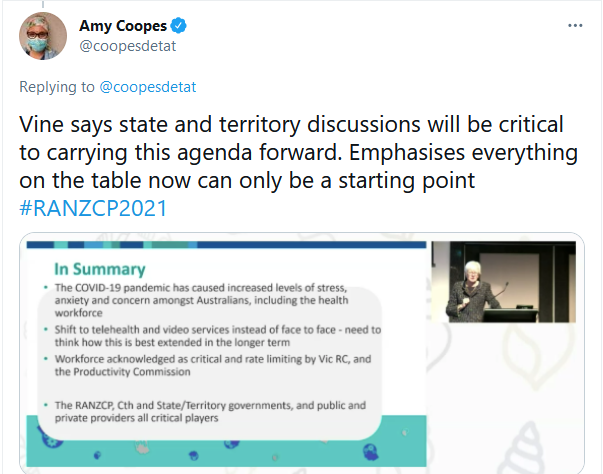 Growing demand  was yet to abate, Vine said, with impacts most marked in Emergency Department/crisis settings and among younger people. Many psychiatrists worked through 2020 without a break, she said.

Vine said fragmentation and siloing was a major contributor to Australia’s workforce issues, with stakeholders spanning state and federal jurisdictions, the public and private systems, and professional and peer cohorts, and the RANZCP itself.

The National Mental Health Workforce strategy was examining these issues, and  would be made public at the end of 2021, Vine said.

Cockram called for a system focused on “empathic, recovery-focused partnership”, where needs were understood and supported, and access was provided to safe, restorative settings.

She also highlighted primary care as the foundation, not a sideline, of the mental health system.

In a specialty whose therapeutic work was founded on personal bonds, getting the right people into the right place was essential to turning disparities around, Coleman added.

“You are talking about an issue that’s all about trust and relationships and feeling safe with people,” he said. 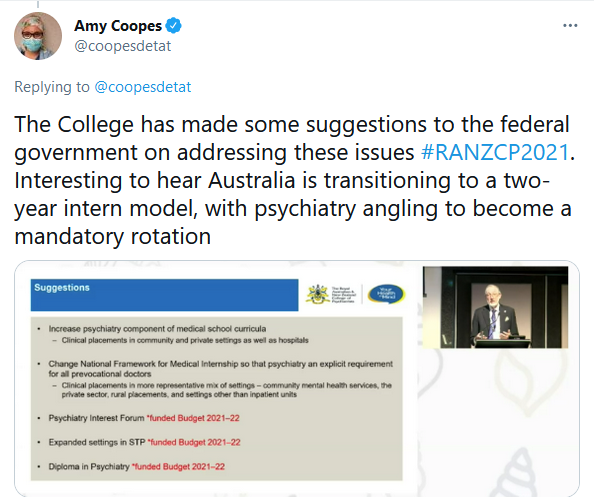 See a 28-tweet thread from Dr Amy Coopes on the workforce session here.

The Congress featured one session on ‘how should we be working towards valuing psychiatrists with lived experience’.

You can watch the session here and read this Twitter thread.  See also these tweets below. 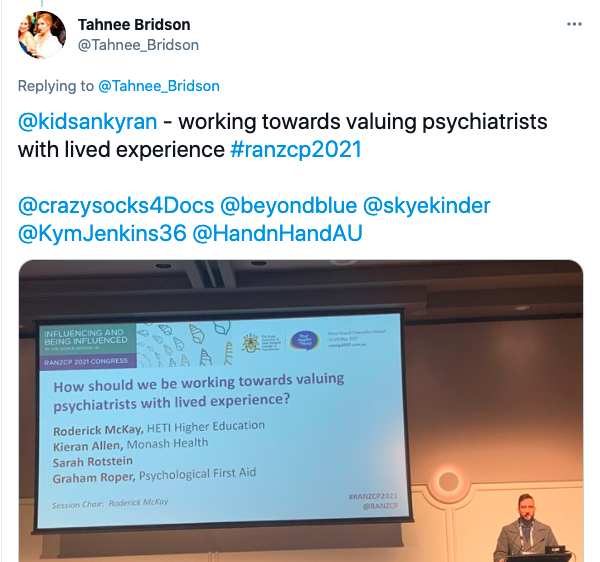 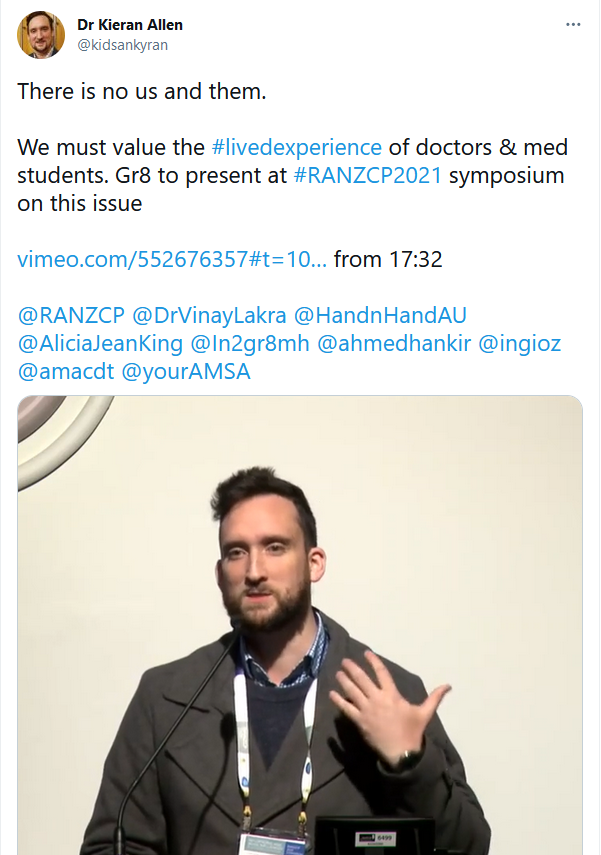 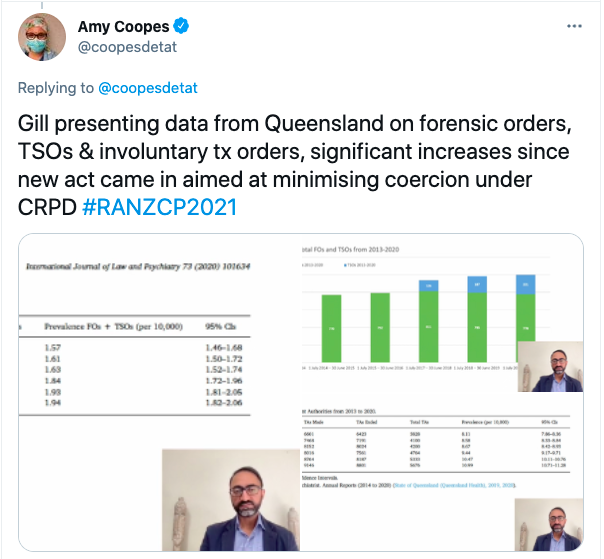 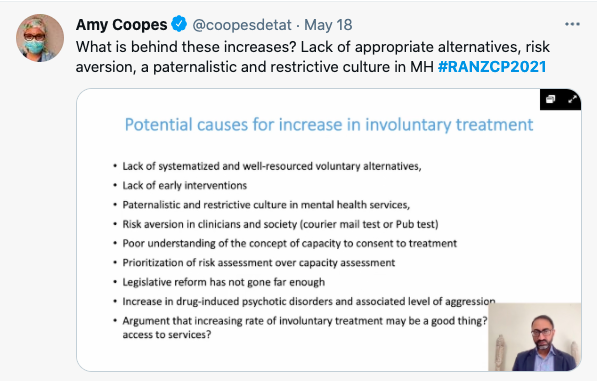 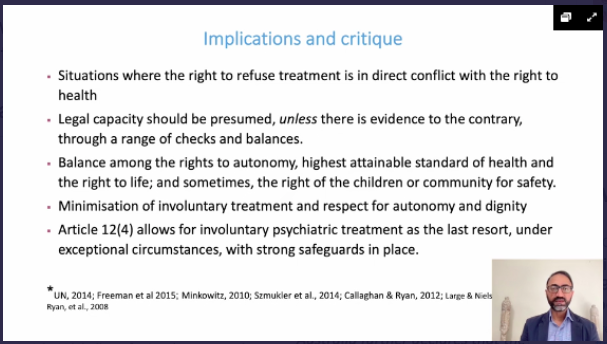 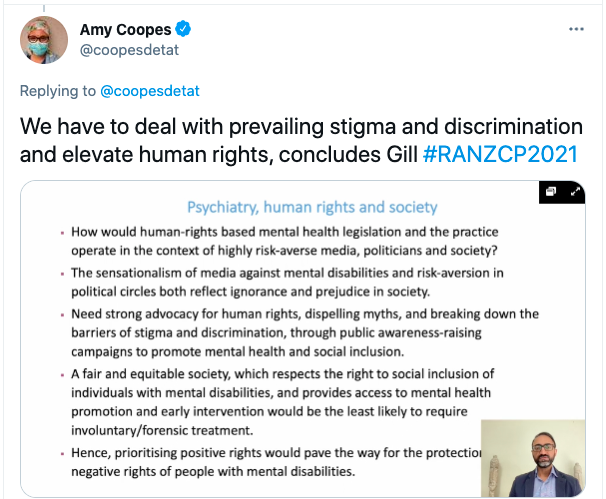 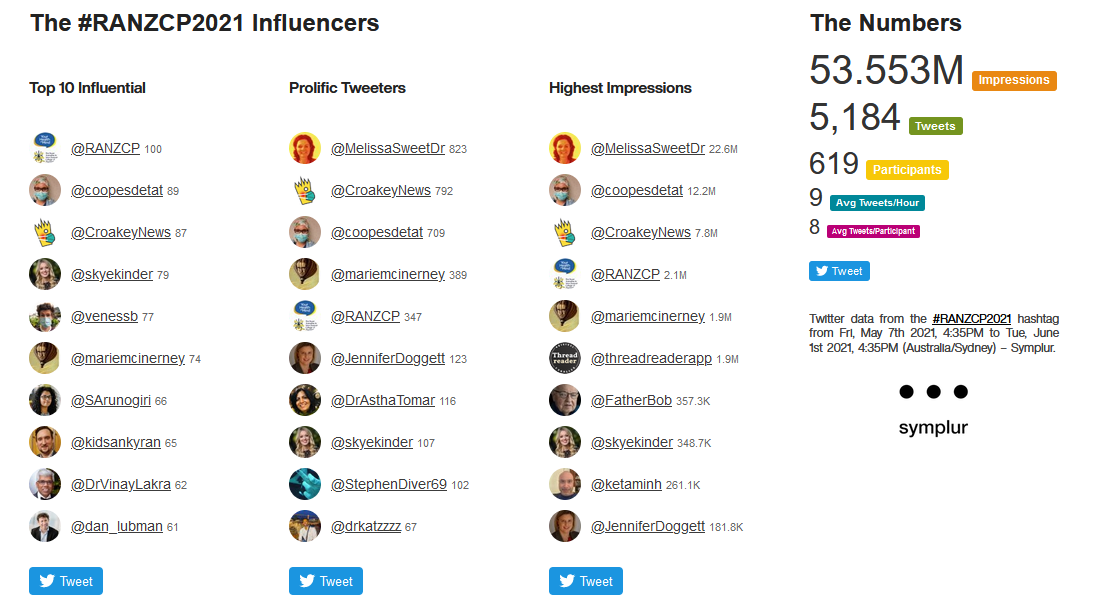 PrevPreviousHow Black Lives Matter is changing the conversation on Palestine
NextJune Oscar: Truth for change, reckoning with our past and transforming our nationNext