The statement from the Racism and the health and wellbeing of children and youth: understanding impacts, finding solutions symposium points to the need for campaigns that focus on creating sustainable attitudinal and behavioural change over time rather than as “one off events” and for good quality evaluation, saying the evidence shows that “ill-conceived anti-racism campaigns can do more harm than good”.

It says better data is also needed to understand how the multiple forms of racism are experienced by children and young people, and across racial and ethnic groups, with the symposium having heard that data collection on racial and ethnic identity and background is a first requirement. 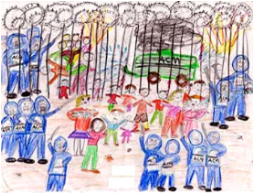 The 100-plus participants from academic, government, non-government and community sectors, including leaders of Aboriginal and multicultural community groups, also identified that children in immigration detention and Aboriginal children in out-of-home care are two groups “requiring urgent and targeted attention”.

Read the full statement and more insights from the symposium break-out sessions focused on the needs of these two specific groups of children below.

You can also hear about the symposium in this Radio National interview with Priest and fellow symposium presenter Dr Gawaian Bodkin-Andrews, senior lecturer in Warawara, the Department of Indigenous Studies, at Macquarie University.

And catch up on the rest of Croakey’s coverage of the conference here.

This summary and recommendations were developed as part of a one-day symposium on Racism and Child and Youth Health funded by the Lowitja Institute and hosted by the Melbourne School of Population and Global Health, University of Melbourne and the Centre of Citizenship and Globalisation, Deakin University. More than 100 participants from academic, government, non-government and community sectors, including leaders of Aboriginal and multicultural community groups, across Australia and internationally attended the symposium.

There are multiple forms of racism that affect children in the Australian context. These include intentional and unintentional behaviours, biases, beliefs, assumptions, and stereotypes. These can occur within systems and institutions of society, as well as via interpersonal and internalised racism.  All of these forms of racism require carefully considered, evidence-based solutions.

Racism is a key determinant of mental and physical health and wellbeing, and thus should be prioritised in child and youth health policy and discussions. This includes identifying and addressing the impacts of racism on children and young in other national initiatives and inquiries such as those focused on suicidal behaviour and self-harm, bullying, and access to mental health prevention and care services. . Evidence-based solutions must be a priority in offering greater support to children and young people experiencing racism and its harms.

Education to combat racism should start in early childhood, have a whole of community focus and should continue across each stage of life. Behavioural change programs need to cross all sectors of the community and be visible to a wide audience.

Positive work within a number of existing programs that aim to address and prevent racism and its adverse affects for children and young people is acknowledged. Programs need to be grounded in evidence and respond to common experiences of racism, but also nuanced for specific racial/ethnic groups and contexts.

Anti-racism campaigns should focus on creating sustainable attitudinal and behavioural change and subsequently must be implemented over time rather than as one-off events. Research documents that ill-conceived anti-racism campaigns can do more harm than good, further reinforcing the need for evidence based approaches that are regularly monitored and evaluated.

Historic and political forms of racism impact on particular racial/ethnic groups, at different times and for different reasons. The symposium identified that children in immigration detention and Aboriginal children in out-of-home care were two groups requiring urgent and targeted attention.  It was clearly stated that wherever possible, children should be supported to remain with their families and in family based settings.   Settings that institutionalise family life have clear and serious impacts on children’s mental, physical and emotional health.   Child protection systems must consider cultural identity and connection to culture as an important factor in the picture of children’s health, safety and development.

(Lack of)  rights of children in immigration detention

The statement was informed by a series of symposium workshops, including one hosted by UNICEF Head of Advocacy Amy Lamoin that looked at the treatment of children in Australian immigration detention centres, and the impact of their detention on health and wellbeing.

It was clear that Australia’s policy on asylum seekers is failing to meet the United Nations Convention on the Rights of the Child to which it is a signatory. 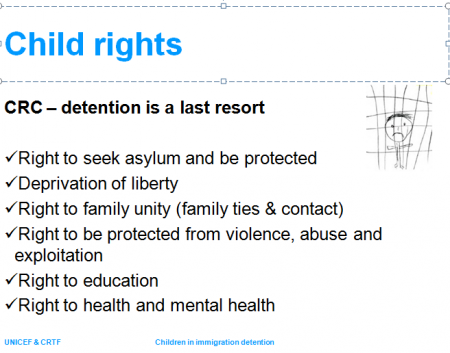 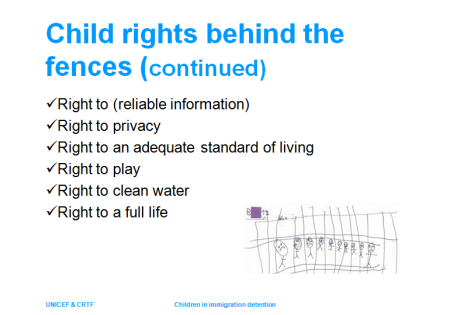 The impact of those deprivations is currently being examined by the Human Rights Commission’s inquiry into the harms suffered by the 1,000-plus children currently detained in immigration detention facilities in Australia and Nauru. Child mental health expert Professor Louise Newman has said it is clear they are at risk of serious mental health and developmental problems, and not clear, given the bipartisan support for detention, what can be done in response. See the full list of published submissions to the inquiry: https://www.humanrights.gov.au/our-work/asylum-seekers-and-refugees/national-inquiry-children-immigration-detention-2014-0

For organisations like UNICEF, advocacy is at two levels: one, to keep children out of detention, and two, to provide adequate support if they are to be detained. 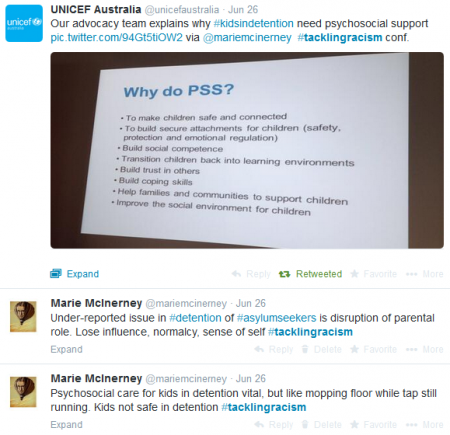 An underlying question for participants was how much racism, at an institutional level and in the high levels of public support for tough approaches to asylum seekers, has to do with the treatment of children in immigration detention and if it helps in advocacy to raise racism as an issue.

Another workshop which looked at the issues faced by disproportionate numbers of Aboriginal children in out-of-home care said the poorer financial and other support provided to kinship carers compared to foster carers in Victoria disadvantaged Aboriginal children and families. It’s an issue that’s also been raised by Victoria’s Commissioner for Aboriginal Children and Young People Andrew Jackomos.

In discussing strategies to reduce numbers of Aboriginal children in care, the workshop also highlighted the need to: 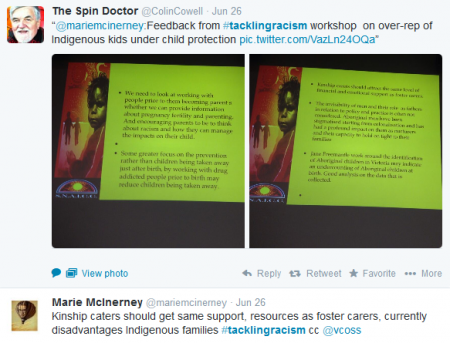 Finally, more tweets in and about the symposium 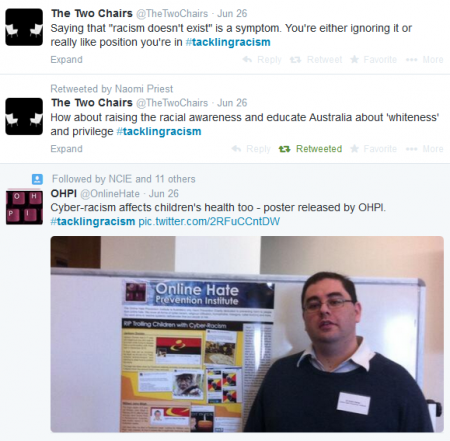 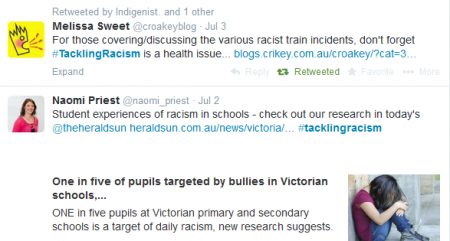 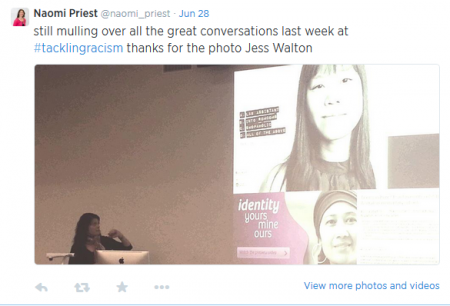 The Croakey Conference Reporting Service coverage of the symposium is compiled here.