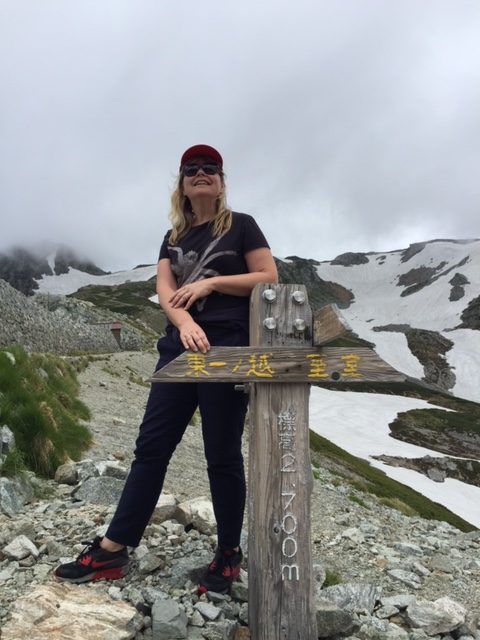 Take a walk in Japan: enjoy some “forest bathing”, ring the bear bells – and watch your step on the way down

On a recent visit to Japan, Croakey moderator Dr Ruth Armstrong and her travelling companions enjoyed a series of walks in the woods and the mountains, that she shares below with readers, as part of the #CroakeyEXPLORE series.

Japan is known for its vibrant cities, but is also a great place for hiking and walking – thanks to its rugged volcanic mountains, spectacular and accessible areas of old forest, and ancient trade and religious routes.

Getting out of town is something the Japanese take very seriously. They even have a word for that out-in-the-bush feeling with which many Australians will identify.

“Shinrinyoku” – “forest bathing” – means going into the woods to immerse yourself, however briefly, in nature. The benefits of the short nature break have been promoted for several decades in Japan as a way to de-stress and maintain health.

Japanese researchers have even produced small body of work demonstrating the beneficial effects of communing with nature on physiological parameters, although the epidemiological findings are less convincing.

Evidence aside, my family is definitely into a bit of Shinrinyoku. When at home in Sydney, this sometimes takes the form of a trip up the freeway to Pie in the Sky, to sit on the bonnet of the car and soak up the the vast swathe of bushland leading down to the Hawkesbury.

With a teenager in tow, we are not quite up to the sort of meandering pilgrimage described so enticingly by Lesley Russell in her two previous Croakey posts, but we recently “dropped in” on some amazing Japanese walks that are the perfect tonic for those who don’t really feel rested on holidays until they’ve worked up a sweat somewhere where the air is fresh and the horizon distant.

To sample a day on the Nakasendo trail, we headed to the beautiful Kiso Valley, which runs alongside Japan’s Central Alps in the Nagano prefecture.

Nakasendo means “path through the mountains”, and indeed, the Nakasendo was originally a 534 km trade route between Tokyo and Kyoto (rather than a being a religious pilgrimage like Japan’s other famous walking network, Kumano Kodo).

It is still possible to traverse long sections of the Nakasendo on multi-day guided walks but our mission was simply to walk the eight kilometres from Magome to Tsumago, two “post towns” that would have served as resting points for traders on foot or horseback in the Edo period.

We did it on a weekend, and there was already a serious crowd of sightseers bustling in and out of the beautifully preserved wooden buildings when we began our walk up the steep stone path of Magome’s main street.

As soon as we crossed the road at the top of the street to follow the signs for the walk, the crowds thinned, and 500 metres into the walk we were alone on a well-made but variable trail. It wound backwards and forwards, more or less following a modern, sealed road but rarely actually on it.

Some sections were mundane but others beautiful: stands of bamboo, groups of very old trees, some dense forest, tiny, all-but-deserted villages, a cascading stream and lots of rice fields (rice is so beautiful up close).

The first 2.5 km was a climb to a mountain pass, then it was downhill all the way to Tsumago. The track included a couple of sections of beautifully preserved stone pathway weaving through the forest, and numerous “bear bells” in more densely wooded sections (we never saw a bear but the idea is for every passer-by to ring the bell to frighten them away).

Tsumago, which we reached in time for a late lunch of cold soba in a café by the river, was its own reward: a functioning village of 200 to 300-year-old wooden buildings catering for the crowd that had magically re-materialised. In true country hospitality, the ladies who served our noodles also gave us fresh apple juice, home made pickles and some sort of apricot puree – all on the house!

One thing to remember in Japan is that there will always be a plethora of transport options. Our hotel offered a shuttle service between the towns but my co-travellers thought that sounded a bit too easy.

Once we finished lunch we headed to a shelter by the main road and waited for a local bus to take us back to Tsumago. We even tossed up simply walking back the way we had come, but it was fun to watch the walking trail criss-crossing the road on the 40-minute ride back to our starting point.

Our next destination was the alpine valley of Kamikochi, not far from the Kiso Valley as the crow flies but with some mountains in the way. I had my reservations about this place because Kamikochi is seriously set up for summer visitors, and I thought the trails might be crowded.

Access is via the small village of Sawando, where cars must be left behind, and buses run all day to take visitors up into the Chubu Sangaku National Park, and the entrance to Kamikochi.

The bus depot was abuzz when we got there, but again the crowds melted away within 500m of the drop-off point.

With no vehicles allowed past the depot, and a simple gravel path winding through a larch forest to a river, then opening up into alpine views, entering Kamikochi felt like discovering Shangri-La.

Most of the visitors wandered wide-eyed from the bus station up to the famous Kappa Bridge, took in the views, snapped a few photographs, and staggered back to the buses, leaving us in a very quiet little community, especially after dark.

There is a good week’s worth of walking options in the area; easy paths along the floor of the valley, and several peaks (including the active volcano, Mount Yakedake 2400m).

The afternoon we arrived, we walked via trails and boardwalks to the end of the valley, then crossed the river and returned to the Kappa Bridge area via the picturesque “Myojin Pond” (an eight km stroll).

The next day we climbed a steep but well-made trail up to the snowline and the Dakesawa mountain hut (five hours return), and on our final day we walked entire the valley floor in a delicious misty rain – about an 18 km round trip.

The valley is really the star, with the river and its tributaries, “ponds” that reflect the snow-capped mountains, a groundcover of dwarf bamboo, and ever-changing vegetation ranging from primordial forest to stands of larch and birch trees.

There were also troops of Macaque monkeys which we learned to look for whenever we spied a disturbance in the ground cover. Thankfully they were indifferent to our presence.

Oh, and we still didn’t see a bear despite all the tantalising warning signs, although we were the only hikers not carrying our own little bear bells.

Like everything else in Japan, the Kamikochi walks are marvelously over-catered.

The “hut” up the mountain was as large as a hotel, (manned by two suitably “dudey” attendants) and devoid of other walkers, and the valley was dotted with small guesthouses selling drinks and simple food.

Crossing the Alps (sort of)

Our third walk in the Japan Central Alps area was actually a bit of a cheat. There’s a spectacular way to cross in less than a day, called the Tateyama Kurobe Alpine (pronounced “Alpen”) Route, but we wanted to stay on the southern side of the ranges, so we went most of the way, had an alpine walk, and returned by the way we had come.

A guide at the Murodo terminal gave us the bad news that it would not be possible to walk up Mount Tateyama without snow shoes but, once out of the building, my companions decided that we should give it a go.

It was a beautiful, sunlit day and the three km path to the summit was very well constructed. I barely noticed crossing the multiple patches of icy snow on the way up. From the summit (2700 m) we could see all the way back to Kamikochi and beyond, as well as the craggy peaks above us.

Again there were not many other walkers, but those we saw were well-equipped with wet weather gear, poles and solid hiking boots. I realised why on the way down.

We all faced the slippery descent in different ways. An elderly couple took pity on my son and gave him a rice ball in a plastic shopping bag, encouraging him to eat the onigiri, and use the bag to slide down the slopes.

My husband (nimble and, it turns out, remarkably well balanced) appeared not to notice the precarious conditions and I clung to him as I skidded along, wondering if I was about to test the mettle of the Japanese emergency services. We weren’t really feeling the Shinrinyoku, but we all made it down.

Getting out of the city on a visit to Japan is probably easier than you think.

All these areas are well-served by public transport and within a few hours’ reach of Tokyo. Of course, you can walk, hike, trek or ramble almost anywhere, including close to home.

If like me, however, you like your Shinrinyoku mixed in with a cultural and linguistic challenge, and an invigorating dose of mutual incomprehension, a summer trip to the Japanese Alps might just be for you.

The Japanese people are not prone to hyperbole. Rainy season is rainy season. Be prepared (or hire some of their amazing rainwear) and just keep walking.

Outside of the larger chain hotels, few people speak English. Book and plan everything you can from Australia (use email and google translate if you have to), and turn up with all your documents and a smile.

Your shoes will get wet. Take waterproof ones and/or a spare pair. Inside shoes will be provided (and insisted upon) in the smaller hotels, ryokan and minshuku (guesthouses).

Most places have a range of accommodation from cabins in campsites to upmarket ryokans and onsen hotels. They don’t all turn up on the usual websites like Japanican so Google around looking for more local sites that cover where you want to go.

Don’t forget, the train’s the way to go (except when it isn’t). There are multi-day rail passes which can be good, but they don’t always work for the slow traveller.

• CroakeyEXPLORE seeks to profile healthy, active, sustainable holidays and other cultural pursuits, undertaken both at home and abroad. We are open to your ideas, so please contact us if you’d like to make a contribution.

• For previous editions of CroakeyEXPLORE – check this link.