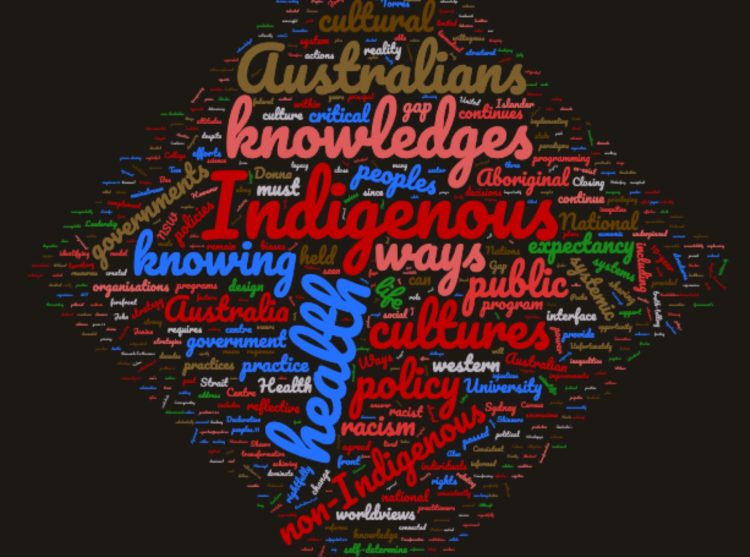 A visual representation of the journal article

Talking about the ‘r’ word: a right to a health system that is free of racism

Indigenous knowledges relating to cultural ways of being, knowing and doing must be front and centre to any public health response, according to a new journal article published by leaders in Aboriginal and Torres Strait Islander health.

However, a deep-seated resistance to addressing institutional and systemic racism and racist attitudes prevents the implementation and sharing of Indigenous knowledges and Indigenous cultures, they say, urging public health policy makers and practitioners to start identifying and talking about racism.

The elevation and implementation of Indigenous knowledges relating to cultural ways of being, knowing and doing are the principal factors required to close the 10-year life expectancy gap between Indigenous and non-Indigenous peoples. Ways of being concern the ordering of reality and how lives are lived within that reality. Indigenous ways of being acknowledge that everything is connected, interrelated and non-hierachial, involving the living and non-living and including the unknown.(1) Ways of being are a reflection of ways of knowing and ways of doing. Ways of knowing are concerned with how knowledges are created and passed along to others. For Indigenous peoples, knowledge is commununally shared and passed on orally through stories that trace the origins of their Nations and reflect Indigenous peoples’ lived experiences gathered intergenerationally over thousands of years.(1,2) Ways of doing includes the practices one engages in, or how things get done, that are directed by one’s values and belief systems. Indigenous ways of doing is underpinned by mutual obligation and accountability, as demonstrated through respect, reciprocity and responsibility to their relations.(1) Indigenous ways of being, knowing and doing comprise worldviews that stand in stark contrast to the non-Indigenous euro-Australian worldviews. The Indigenous system is collective and interconnected, whereas the non-Indigenous system is individualistic and separated into parts that are not connected. Worldviews are not simple to define or explain. Working at the cultural interface where worldviews can either collide or respectfully exchange, emphasises the importance of  Indigenous health workers, leaders, organisations and community.(2,3)

If real transformational change in the health status of Indigenous Australians is to be achieved, then the knowledges as well as the cultures of Indigenous peoples must be front and centre in all public health policy and programming responses. Unfortunately, the knowledges and cultures held by Indigenous Australians are not fully acknowledged or recognised and are often dismissed as irrelevant. For far too long, non-Indigenous and western scientific and biomedical knowledges of ways of being, knowing and doing have dominated and informed public health policies and programs. Consistent with the United Nations Declaration on the rights of Indigenous peoples, the public health sector must provide the means for Indigenous Australians to self-determine and rightfully practise their knowledges and cultures of ways of being, knowing and doing.(4) More than 30 years have passed since the 1989 National Aboriginal health strategy declared an Indigenous health crisis.(5) Consistent government efforts to address this health crisis have been futile.(6) Nonetheless, emphasising the centrality of culture for Indigenous Australians and acknowledging the reality of racism in a public policy instrument like the Australian Government’s National Aboriginal and Torres Strait Islander health plan 2013–2023, has created an opportunity to position Indigenous peoples and their knowledges at the forefront of public health responses and policy.(7) Unfortunately, despite a willingness among some senior bureaucrats, politicians and academics, ingrained racist paradigms continue to sustain the health disparities and inequities, and social, economic and political inequalities that Indigenous Australians continue to experience.(8-10)

What do we know so far?

The efforts and investments over these past three decades have only seen the slightest improvements to the 10-year life expectancy gap between Indigenous and non-Indigenous peoples.(11) Further, the social determinants of health and the legacy of colonisation continues to contribute substantially to the social, economic and political inequalities experienced by Indigenous peoples.(11)

Although there have been many plans and strategies, along with hundreds of millions of dollars in state, territory, and federal funding since the 1989 National Aboriginal health strategy was introduced, there have been limited improvements in health outcomes. Also, Indigenous wellbeing in the mainstream health system continues to decline with avoidable negative conditions and deaths widening.(11)

What needs to happen?

The new national Closing the Gap Agreement, made between the Coalition of Peaks and all levels of governments, have committed to a range of reforms including “systemic and structural transformation of mainstream government organisations”.(12) All governments have agreed to eliminate racism with inclusion of Indigenous cultures and truth-telling underpinning their policy responses.(12) Additionally, a national summit called “for more transparency, truth-telling, power-sharing and culture-informed decision-making practices integrated within policy productions, program implementation and evaluation strategies”.(13)

Reinventing institutions and transforming their structures, systems and practices requires an insurgency that challenges the dominance of non-Indigenous scientific western and biomedical knowledges, which have been responsible for determining policy and program decisions about the health of Indigenous Australians.(14,15) That is not to say that there is no place for non-Indigenous western science. On the contrary, the knowledges and cultures held by Indigenous Australians must be recognised, valued and be front and centre to public policy and programming, and public health practice. Importantly, they can complement and co-exist with western knowledges. However, where knowledges meet at that cultural interface, Indigenous knowledges and cultures are subjugated.(3,16) Innovations are inevitable if those knowledge systems and cultures are recognised as independent entities able to complement the other through cultural infusion.(16) 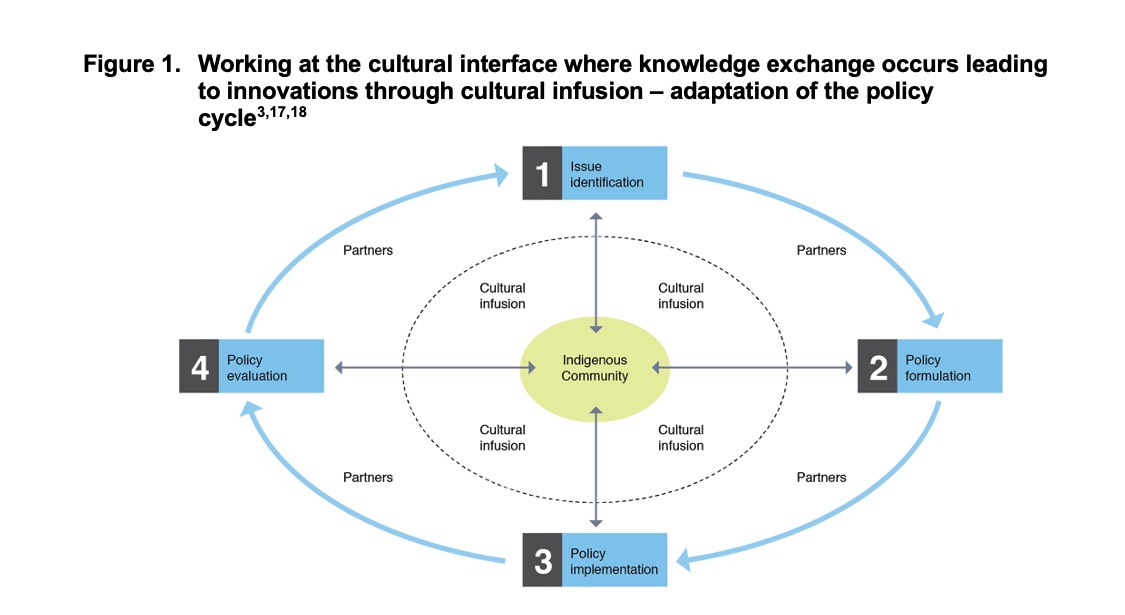 Therefore, Indigenous Australians must be provided with the means and opportunity to rightfully self-determine and govern their affairs. Mainstream governance structures within organisations must strive towards sharing power equally including privileging Indigenous voices, knowledges and cultural ways of being, knowing and doing in policy production and service design.

Australia has seen consecutive National Aboriginal and Torres Strait Islander health plans that have consistently spoken about the relevance of culture and the holistic nature of health. Yet the rights of Indigenous Australians, as espoused in the United Nations Declaration on the rights of Indigenous peoples(4), remain compromised – specifically, in relation to being able to self-determine rightfully and freely, without prejudice or biases, their cultural expressions and knowledges in how health and healthcare can be practised.(4) Also, despite the emergence of Indigenous cultures in public policies and programs, there is no recognition of the knowledges held by Indigenous Australians and their intrinsic relationship to Indigenous cultures.(3) This is racism and a result of racism in its many forms. Further, issues of institutional and systemic racism, racist attitudes, unconscious biases and non-Indigenous western worldviews of ways of being, knowing and doing continue to prevail and prevent effective policy and programming design and implementation. Finally, research that includes Indigenous science and methodological practice on the role of racist paradigms and their rules, norms and behaviours in shaping health systems, their organisations, and individuals’ behaviour will provide greater critical reflective (21-26) understanding of when, where and how to act so transformative change occurs.

The Poche Centre for Indigenous Health at the University of Sydney sponsors Dr Carmen Parter as an academic fellow under the Wingara Mura Leadership Academy program. The National Health Leadership Forum, which is the national representative health forum for national Aboriginal and Torres Strait Islander peak health bodies in Australia, provided in-kind support, guidance and advice for this manuscript.