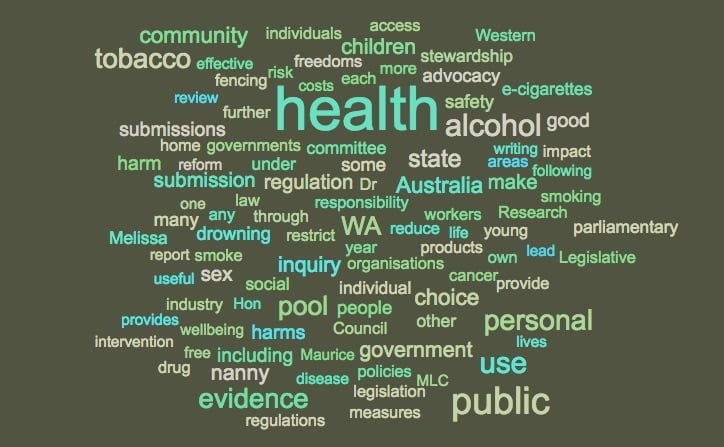 A word cloud image from the #LongRead version of the article below.

Ten ideas on careful stewardship for the public’s health: suggestions for making submissions

The WA Legislative Council has launched an inquiry into “Personal Choice and Community Safety”, with a focus on public health initiatives involving government regulation. Submissions are due by October 5.

The authors of the article below have plenty of ideas on how to make an effective submission to this and other such inquiries, while also reminding us of why careful, evidence-informed stewardship is good for the public’s health.

In addition to their article below, the authors have provided a #LongRead version, which will no doubt be of interest to many attending the Public Health Association of Australia’s conference in Cairns this week (See #AustPH2018 for more conference news).

“No man is an island entire of itself…any man’s death diminishes me, because I am involved in mankind.” (John Donne)

You may have seen in the news a WA inquiry into “Personal Choice and Community Safety”. It follows on from a 2015 federal inquiry to which many organisations made submissions.

The focus is essentially public health initiatives involving government regulation. Now, we are not suggesting that government intervention has always been successful (e.g. involuntary income management). However, across key issues under consideration here, public health regulation is effective.

We comment specifically on alcohol and tobacco use, e-cigarettes and pool fencing in the context of stewardship but recognise other issues for consideration (e.g. gambling, seat belts, firearms). We also highlight opportunities for law reform around sex work and drug use.

1. Know the scope of the inquiry

Parliamentary Committees are a useful mechanism to provide feedback on legislation or policy issues. This inquiry’s scope is to review and report on the economic and social impact of measures to restrict personal choice ‘for the individual’s own good’, particularly:

(1) risk-reduction products such as e-cigarettes, e-liquids and heat-not-burn tobacco products, including any impact on the wellbeing, enjoyment and finances of users and non-users;

(2) outdoor recreation such as cycling and aquatic leisure, including any impact on the wellbeing, enjoyment and finances of users and non-users; and

(3) any other measures introduced to restrict personal choice for individuals as a means of preventing harm to themselves.

The purpose of written advocacy is to persuade. In order to be persuasive, your submission must be useful and tailored for the intended reader.

Of interest is a PHAA (WA Branch) event on influencing policy the day before submissions close.

3. “Nanny State” is a tired cliché

Iain MacLeod coined the “nanny state” in a 1965 column railing at proposed speed limits. The phrase is used regularly to attack health organisations or governments (usually by those with vested interests). The inquiry Chair (who has admitted to accepting donations from Philip Morris) has suggested, “…our most basic rights and freedoms are being chipped away at…through nanny-state regulations…” This push to be free from government interference fails to recognise a government’s responsibilities to protect community health and safety, and fails to place public health interests before vested interests.

4. Individual actions do not occur in a vacuum

Personal freedom is essential for good health. But social, economic, political and environmental forces make exercising personal choices for health difficult. The ‘stewardship model’ proposes that: “…the state should not coerce people or restrict their freedoms unnecessarily, but…has a responsibility to provide the conditions under which people can lead healthy lives…Doing nothing’ is an active decision…that will have an impact on people’s ability to lead a healthy life.”

5. Regulation is important for public health

Since the late 1880s, Australian governments have implemented evidence-informed measures to protect and promote public health resulting in millions of longer and healthier lives. This has included fiscal and pricing policies that increase tax on tobacco, alcohol and unhealthy food; built environment changes that promote physical activity and prevent injury; and tackling social determinants of health through targeted investments in social welfare programs.

6. Alcohol is ‘no ordinary commodity’, and for good reason

Alcohol use is associated with significant risk of harms to the drinker (e.g. linked to cancers) and to others (e.g. interpersonal and family violence, FASD). It is also addictive, meaning for some people, the decision to consume is not an entirely free choice. Alcohol costs the WA community $3.1 billion each year (via policing costs, hospitalisations, road crashes, and ambulances).

The costs of failing to effectively regulate alcohol are too great to leave to individual responsibility. Urgent action is required to regulate alcohol availability, pricing and promotion to support low risk alcohol use.

7. Second-hand smoke is a killer (as is smoking)

Tobacco use is the leading cause of preventable cancer and cardiovascular death and disease. Evidence is unequivocal about the serious health effects of second-hand smoke (SHS). There is no risk free level of exposure. Infants and children are particularly vulnerable as their bodies are still developing and are susceptible to the poisons found in tobacco smoke. Eliminating exposure to SHS is imperative. A wealth of research demonstrates the health and social benefits of smoke-free legislation and its effectiveness as a powerful public health intervention.

8. On e-cigarettes, take the precautionary approach

There are tobacco control examples of purported reduced harm products, many of which have been commercially driven with little evidence, and unable to demonstrate reduced harm in those who used them. When considering risks, harms and any potential benefits of new tobacco products, adherence to the evidence is critical. If the balance of evidence supported e-cigarettes as a quitting aid and net public health benefit, we would expect statutory health authorities to facilitate their availability. Current evidence (including NHMRC and TGA), does not support e-cigarette use with increasing evidence of harm. We monitor the evidence with interest, while emphasising that individual opinions, personal convictions and industry lobbying are not public health evidence.

Drowning is the leading cause of preventable death in children under the age of five. A ten-year review found on average four children under five fatally drowned each year (average cost of each death AUD $4.64 million), with a further 32 hospitalised. Most children drowning in pools are under three and unable to make decisions to keep themselves safe. Pool fencing does not substitute adult supervision but is a critical secondary protection mechanism if adult supervision lapses. One-quarter of toddler drownings in pools or spas over the last 15 years occurred at a relative’s or neighbour’s home. Pool owners cannot make decisions to install barriers based on individual choice or assessment of risk.

Recent research suggests sensible reforms can improve health outcomes for sex workers by reducing stigma and ensuring sex workers can access health, police and legal services. Full decriminalisation (implemented in NSW) supports better coverage of health promotion programs for sex workers than other models of regulation. Punitive law and order approaches to drug policy have significant ramifications. Currently illicit drugs should be legalised, regulated and taxed. There is evidence and support for this approach from health and medical organisations and the community.