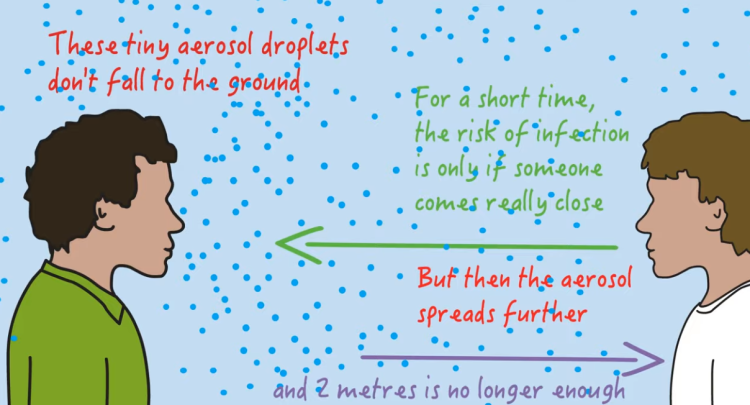 Ten streams of evidence on airborne COVID-19 transmission, and responses to a backlash

Introduction by Croakey: A group of international researchers is calling for urgent changes in public health policies to reflect “ten streams of evidence” that they say collectively support the hypothesis that COVID-19 is spread primarily by airborne transmission, rather than by larger “droplets” as is still the main advice of the World Health Organization.

It challenges a systematic review led by Oxford Professor Carl Heneghan, Director of the Centre for Evidence-Based Medicine, published in March, that states: “The lack of recoverable viral culture samples of SARS-CoV-2 prevents firm conclusions to be drawn about airborne transmission”.

However the Greenhalgh-led research finds there is “consistent, strong evidence that SARS-CoV-2, the virus that causes COVID-19, spreads by airborne transmission” and that while other routes can contribute, the airborne route is likely to be dominant.

As an article in the BMJ outlined this week, how COVID-19 spreads is one of the most debated questions of the pandemic, with significant implications for infection control practices worldwide, although it also notes that the two theories in play are “not mutually exclusive”.

By contrast, it says, airborne transmission means the need for more comprehensive measures to avoid inhalation of infectious aerosols, including ventilation, air filtration, reducing crowding and time spent indoors, use of masks whenever indoors, attention to mask quality and fit, and higher-grade protection for health-care staff and front-line workers.

The research cites long-distance transmission in Australian and New Zealand hotel quarantine, “super spreader” concert and church events, and significant transmission of SARS-CoV-2 by people who are asymptomatic as key parts of the accumulated evidence.

“The public health community should act accordingly and without further delay,” the researchers say, adding that they found no study that had provided strong or consistent evidence to refute the hypothesis of airborne SARS-CoV-2 transmission.

The article was described on Twitter as “compelling” by Victoria’s Chief Health Officer Dr Brett Sutton and cited by Public Health Association of Australia president Dr Tarun Weeramanthri in his call on Australian authorities to “stop dancing around the issue of airborne transmission” and its risks for hotel quarantine and Australia’s pandemic management. 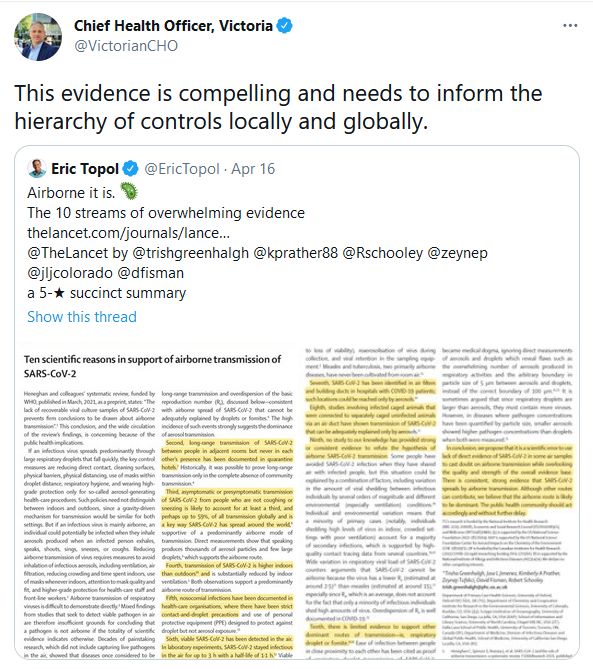 Greenhalgh told Twitter that the research has had significant interest but also had been hit with a “bit of a backlash”.

In response, she has published a detailed Twitter thread this week refuting many of the criticisms, which is republished in full below with her permission.

In it she says the researchers are “begging” the World Health Organization “to show scientific leadership at this historical moment, in the face of overwhelming evidence”.

He explains why most of the long-distance transmission cases are being identified in the quarantine hotels in Australia and New Zealand: “Because the lack of community cases makes it much more certain that transmission happened there. (Can’t do in US) Plus there is video surveillance etc”.

Had quite a bit of backlash to our paper, published last week, which set out 10 streams of evidence supporting predominance of AIRBORNE spread of SARS-CoV-2. I respond to some criticisms in this thread.

Criticism 1: “The paper is just opinion, and several authors aren’t even doctors.”
Response: No. It’s well-researched scholarly argument, produced by an interdisciplinary team of 6 professors including 3 docs, 2 aerosol scientists and 1 social scientist.

Criticism 2: “Sure, the virus may be airborne, but this is a minor issue. Droplets are so much bigger and more infectious.”
Response: We disagree. Most infection happens by INHALATION. Every gulp of infected air contains thousands of tiny viral-laden particles.

Criticism 4: “Half air sampling studies found no virus, therefore the virus is not airborne or airborne is minor route.”
Response: Logical fallacy. If I go for a walk and don’t see a kingfisher, this proves neither that kingfishers don’t exist nor that they’re almost extinct.

Criticism 5: “In contrast to the sparse and flawed studies of aerosols, the virus has been easily and consistently cultured from droplets.”
Response: Incorrect. The only evidence cited to support this claim seems to be “unpublished data from my lab”.

Criticism 8: “Given that anything smaller than 5 microns is a droplet, and droplets fall within 2m, we can largely forget about transmission beyond 2m.”
Response: Incorrect. Particles of up to 100 microns travel far beyond 2m in the air, so physical distancing isn’t enough.

Criticism 9: “The paper is scaremongering. If we say SARS-CoV-2 is spread through the air, people will panic.”
Response: But it IS spread through air, and until we acknowledge that, our measures to control its spread will be ineffective. Lying isn’t an effective strategy.

Criticism 10: “Okay it’s airborne, but it’s not PREDOMINANTLY airborne”.
Response: The evidence suggests that it is. Super-spreader events have no other explanation. Over-dispersion. Long-range infection in quarantine hotels. Many other examples in the paper. Please read it.

Criticism 11: “A systematic review came to the opposite conclusion.”
Response: A review isn’t gold-standard if it a) omitted topic experts, b) asked an overly narrow question, c) misclassified high-quality studies as low-quality, d) failed to account for disconfirming evidence.

Criticism 12: “But systematic reviews are always more rigorous than narrative reviews”.
Response: No they’re not. We scotched that flawed assumption here:
ncbi.nlm.nih.gov/pmc/articles/P…

Criticism 13: “The paper is an ad hominem attack against individuals in the WHO.”
Response: Please read the paper. It’s not personal. Thousands are dying daily. We’re begging WHO to show scientific leadership at this historical moment, in the face of overwhelming evidence.

Link to the paper again:
linkinghub.elsevier.com/retrieve/pii/S… 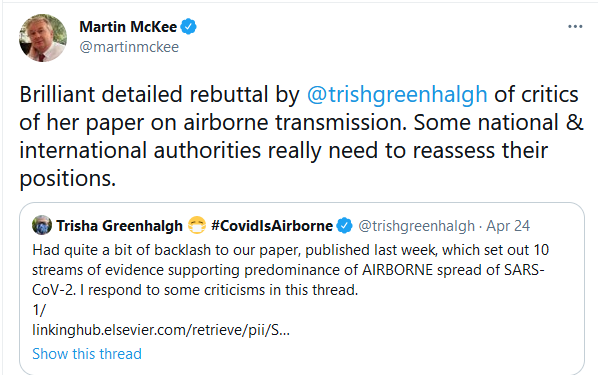 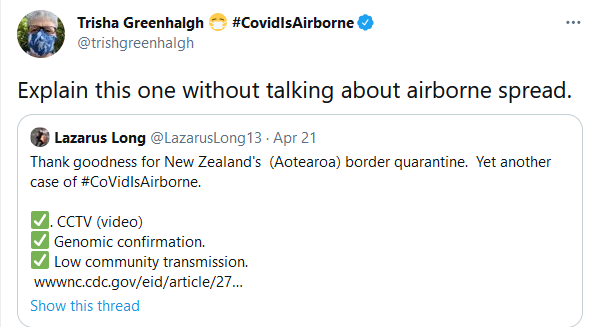