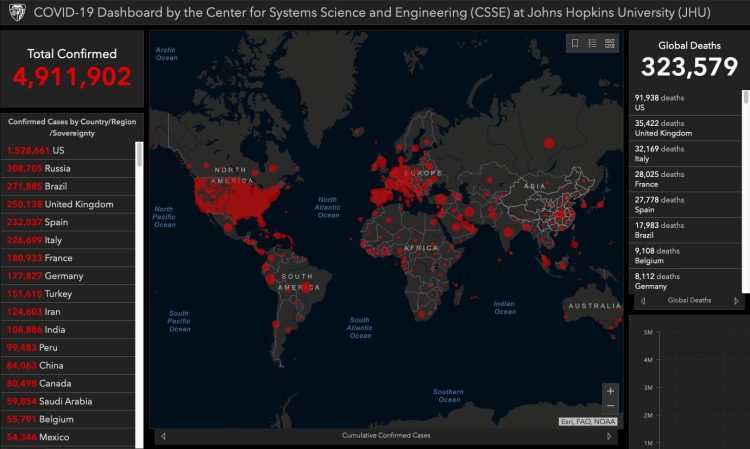 Image taken from real-time online mapping of the outbreak, by John Hopkins University Center for Systems Science and Engineering. At 7.15pm AEST on 20 May

The mantra of health authorities during the pandemic has been “test, test, test” – but many complexities are involved, report Professor Allen Cheng and Professor Deborah Williamson.

“Test, test, test” was the message from the World Health Organization (WHO).

More than a million tests for COVID-19 have now been performed in Australia.

A decision was taken early that if we were to be able to control this virus, we needed to test widely in order to identify those with the infection, known as the “test, trace and isolate” strategy.

This approach was successfully employed by several other countries including China, South Korea and Germany. This meant that even people with mild symptoms needed to be tested to find cases so that they could be isolated to prevent onward transmission. Finding cases also means that their contacts could be put into quarantine to prevent them transmitting if they develop infection.

Mass testing as a public health intervention is a strategy used in non-communicable diseases.

However, it isn’t generally a tool used to control an infectious disease – this is generally feasible in a small community, but rarely has been attempted in a whole country.

Implementing this strategy has been difficult – laboratories needed to be scaled up and testing consumables sourced. Supply issues, compounded by a mismatch between global supply and demand,  have been encountered with many different items – the test reagents, the swabs used to take the test, even the plasticware used to move fluids from the swab to the test platform.

Many other countries, including the United Kingdom and United States, took a different approach, limiting testing to those who were sufficiently unwell to require hospital care, and some other high risk groups.

This is generally a strategy that would usually be employed for influenza – testing is mostly performed in hospitals to guide treatment decisions and for infection control reasons. While some testing does still occur in the community, case finding and contact tracing is generally only performed in high risk settings (for example, aged care facilities).

In Australia since January, this is currently around 0.7%, meaning that one case has been found for every 147 tests that are performed.

In contrast, both the UK and US are running at around 13% of tests being positive (or 1 case per 7-8 tests), reflecting more limited testing amongst specific epidemiological groups.

However, testing widely does not always provide clearer information.

Victoria’s testing blitz called for asymptomatic people to be tested; in more than 100,000 tests, around 20 were positive.

Positive tests in asymptomatic people are difficult to interpret – while it is thought that at least some of these tests represented true active infection, there are other possibilities – tests can remain positive after recovery, and occasionally, false positive tests can occur.

Even with widespread testing, it is also possible to miss symptomatic infections.

People may not be tested for many reasons – they may think that their sore throat is insignificant and not worth getting a test. There may be disincentives to be tested, such being sent home from work until the test result comes back and missing out on income.

Some people may not have ready access to health care (for example those in rural or remote communities), or are marginalized from society more generally (such as homeless populations).

Others may not have understood the message about the importance of finding cases, either due to limited health literacy or language barriers.

In the US, both the crowded working conditions, as well as the characteristics of the working population, have been implicated in the large outbreaks in meat packing plants, with obviously parallels to the ongoing outbreak amongst meat workers in Victoria.

“Point of care” or “near care” tests

Ideally, we could use tests that could be easily performed in the clinic or bedside, called “point of care” tests.

Point of care tests that are most similar to the PCR based tests for active infection that we use now, come in cartridges with results available in a few hours.

However, they require specialised, expensive machines to load them, and they typically can’t be done in large volumes (eg four at a time) – a more appropriate term for these tests are ‘near care’ tests.

An obvious role for these near care tests are in remote Aboriginal and Torres Strait Islander communities, where it might otherwise take several days to transport specimens to a laboratory.

There are other point of care tests, known as serological assays, that work differently. Results appear much like pregnancy tests, except that they take blood rather than urine. Instead of directly testing for the SARS-CoV-2 virus, they test for antibodies that the body makes in response to infection.

Unfortunately, some of the currently available tests have proved somewhat problematic. Antibodies don’t appear for up to two weeks, and therefore a positive test is a marker of past, rather than current infection. Even after that time, around 15-25% of people with confirmed infection remain negative.

There is also concern that many of these tests can give a false positive result in up to 5% of tests and these results can have important consequences.

This is one reason why the concept of an “immunity” passport is premature: apart from the possibility of a false positive, it isn’t known whether antibiotics provide complete protection against subsequent infection, or the duration of protection.

Serological tests do have their place, although they are not yet in common use in Australia. Finding patients who have had infection can be helpful in filling in missing links in transmission chains. As they are a marker of past infection, large scale population studies can be helpful in determining what proportion of the population have been infected.

However, this does require a good test, particularly one that doesn’t give false positives. This is simple to conceptualise – if 2% of test results are false positive (meaning a specificity of 98%), then you would expect 2% of tests in a population that had never seen COVID-19 to be positive, and they all would be false positive. This is the likely explanation for the Santa Clara study, which falsely estimated that 2.8% of the population had had infection using a test that was poorly validated.

It is clear that widespread testing for COVID-19 will need to continue for the foreseeable future in order to prevent and control this pandemic.

However, a clear understanding of the risks and benefits associated with this approach is essential so that test results can be interpreted and acted on appropriately.