In coming months, Croakey hopes to bring you stories from Aboriginal and Torres Strait Islander people from across the country about the impacts of over-incarceration – upon individuals, families, and communities – and about related issues.

We also will be sharing stories from communities that highlight effective, culturally appropriate solutions to help reverse the increasing rates of imprisonment.

And we hope to put the spotlight on government policies and practices that are contributing to the over-incarceration of Aboriginal and Torres Strait Islander peoples.

All this will be possible thanks to the generosity of more than 300 contributors to the JustJustice crowdfunding campaign, which concluded successfully at the Pozible platform  on 7 June (their names are listed below and on the #JustJustice homepage).

In the days leading up to the campaign deadline, the #JustJustice team members (Summer May Finlay, Marie McInerney, Mitchell Ward and myself) were not hopeful about our prospects. Just three days out from deadline, we had 108 supporters and needed to raise $10,000 to reach our target.

We consoled ourselves with the thought that just by doing the crowdfunding campaign, this was helping to put the spotlight on over-incarceration as a critical health concern for Aboriginal and Torres Strait Islander people. It was terrific, for example, seeing GP Dr Edwin Kruys engage with the campaign by interviewing Summer May Finlay and writing about it for his blog, Doctor’s Bag.

On the final Sunday morning of the campaign, less than 12 hours from deadline, we needed about $6,000 to reach the target – otherwise none of the pledges would be realised. And this was the Sunday of a long weekend.

Luke Pearson, the founder of @IndigenousX, gave some much-needed motivation that morning. His advice was to “go hard” on Twitter as there was “too much on the table to throw away”.

As we acted on his advice – and others joined us in creating a Twitter storm – the pledges began to flow in, thick and fast, and the despondency that we had been feeling transformed into exhilaration (as so joyously represented in the “happy dance” that Finlay promised if the campaign reached its mark, not really expecting she would be called to deliver).

In the end, we passed the funding target with a few hours to spare. 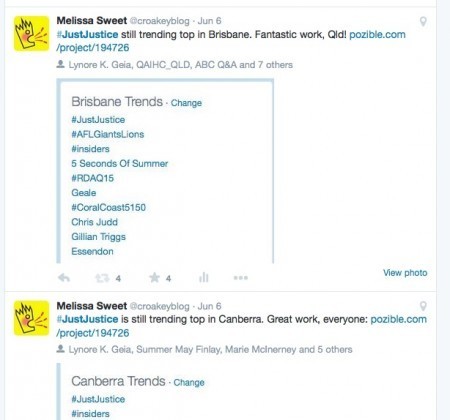 The success of the #JustJustice crowdfunding was an example of the power of connective action and of an engaged, collaborative network on Twitter, as many people took it upon themselves to give up time on a long weekend to support the campaign by spreading the word via Twitter, Facebook and their networks.

The campaign hashtag #JustJustice trended number one in Canberra and Brisbane during the day as supporters around the country joined in.

Having hundreds of people joining into support the campaign and say “this issue matters” sent a powerful message and was also empowering in itself.

If you want to know how to help support a crowd-funding campaign, look at some of the tweets at the bottom of this post from some of the generous supporters of #JustJustice.

Warm thanks in particular to Dr Marie Bismark for not only constant tweeting but relieving our anxiety levels greatly on the Sunday afternoon with her promise to cover any funding gap if we couldn’t get the campaign over the line. 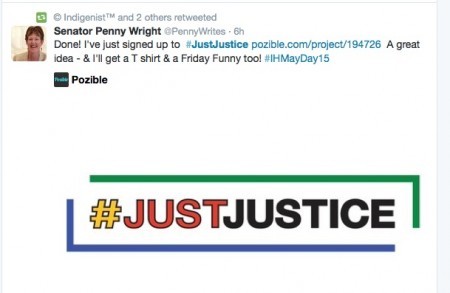 We also enjoyed a few celebrity moments; Sir Michael Marmot, one of the global leaders for action on the social determinants of health, retweeted #JustJustice, and we also appreciated the RTs and support of cartoonist First Dog on the Moon, Van Badham and Todd Sampson. 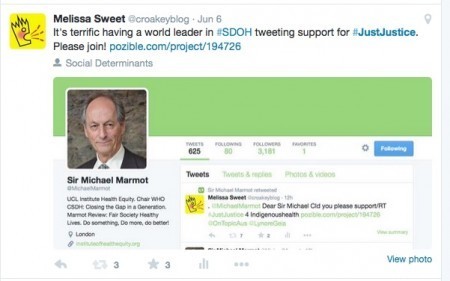 Thanks also to Dr Mark Lock, Darren Parker, Anne Messenger and others who wrote for Croakey during crowdfunding campaign, as well as to Professor Tom Calma, Mick Gooda, Dr Marshall Watson and others who contributed their time and expertise. We also are grateful to those who have since come forward, volunteering their services to help the campaign.

We would particularly like to acknowledge Jesuit Social Services and Frank Meany as the campaign’s two premium sponsors. It would not have happened without their support.

Jesuit Social Services is proud to support the #JustJustice project and investigate solutions to the over-incarceration of Aboriginal and Torres Strait Islander people. As Mick Gooda has said, this issue is a public health catastrophe. Jesuit Social Services has nearly 40 years of experience working with people in and exiting the prison system and we know of the significant discrimination and disadvantage experienced by many Aboriginal people that too often drives contact with the justice system. We know also of the strength in Aboriginal communities that supports people’s reintegration after prison.

We are committed to working alongside, and in partnerships with Aboriginal controlled organisations and Aboriginal community leaders to strive for social change and improved outcomes for the people we work with. On an organisational level, Aboriginal staff members of Jesuit Social Services have recently convened an Aboriginal Advisory Group to consolidate our knowledge of working with Aboriginal program participants and communities, and to lead our reconciliation process and cultural education.

We were moved to support #JustJustice because we believe there is scope for significant and prolonged change. We hope that the solutions-focused work completed by health, policy and criminal justice experts as well as researchers and journalists will serve to influence those in power, like politicians, policy makers and educators.

Thanks also to the other premium sponsor, Frank Meany, will be known to many Croakey readers for his work with One Vision.

We encourage #JustJustice supporters and Croakey readers to take the Change the Record pledge here.

“The rates at which Aboriginal and Torres Strait Islander people are experiencing violence and being put in prison far exceeds that of non-Indigenous Australians. And we have reached a crisis point.

I want to be part of an Australia where Aboriginal and Torres Strait Islander communities and families are safer and stronger. I want to change the record.

• Cut the disproportionate rates of violence to at least close the gap by 2040 with priority strategies for women and children,​​

​​I call on all levels of government to:

​•  Invest in early intervention, prevention and diversion strategies, which address the root causes of violence and imprisonment; and

• Work in partnership with Aboriginal and Torres Strait Islander people, communities, services and their representatives, to develop and implement solutions.”

If you are ever wondering how to support a crowd-funded campaign, watch and learn from some of the #JustJustice champions. 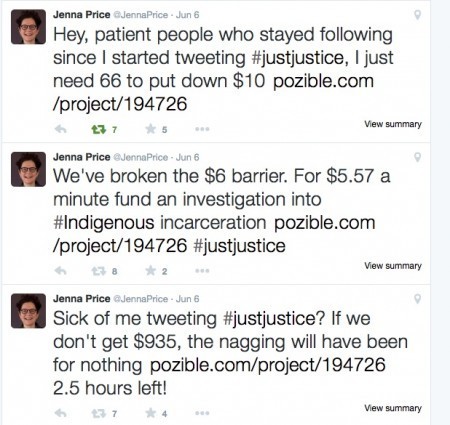 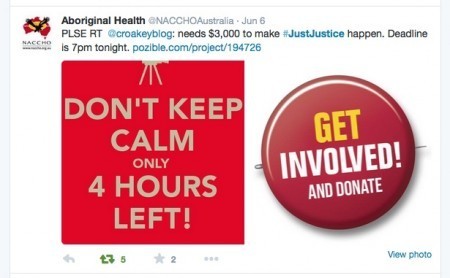 A special shoutout to James Cook University’s Dr Lynore Geia who raced all the way to the finish line. 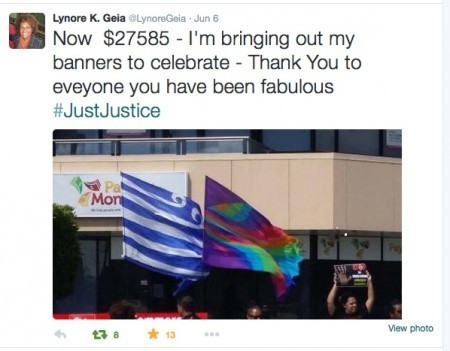 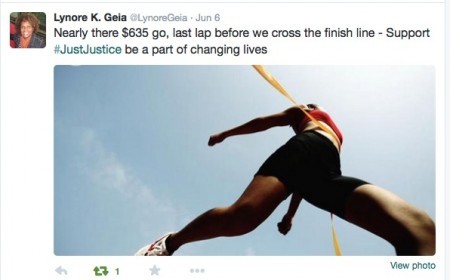 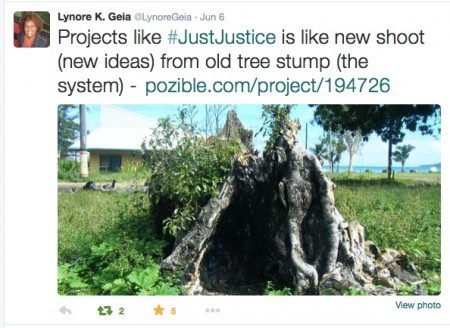 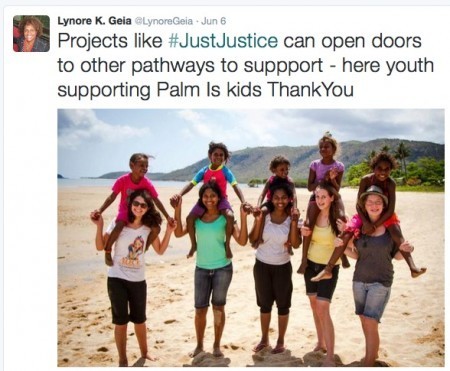 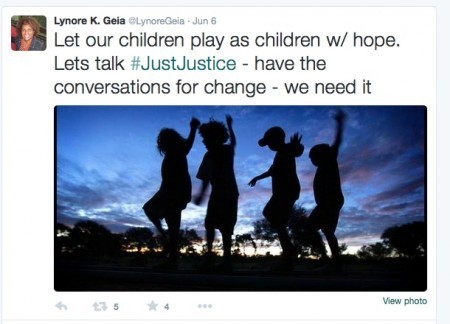 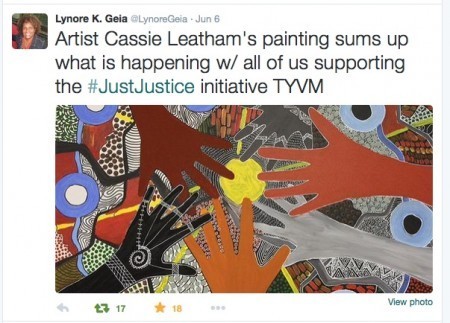 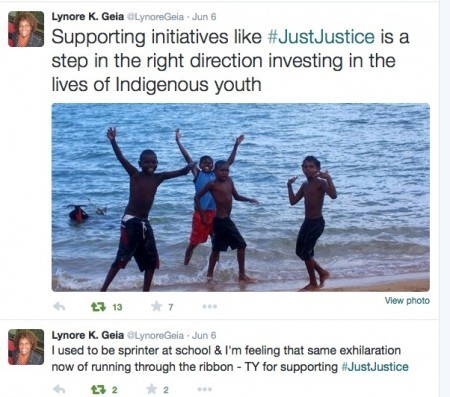 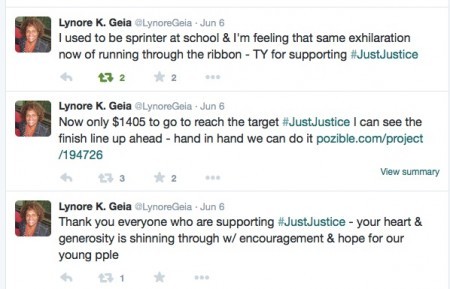 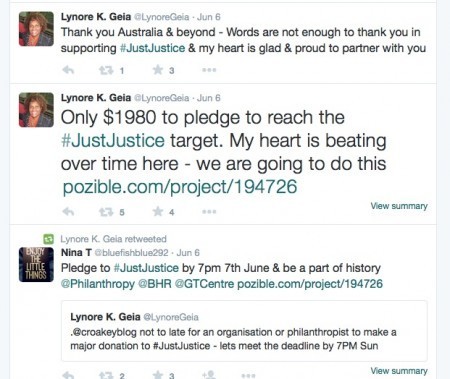 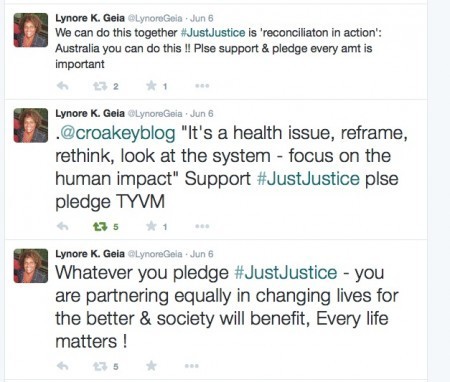 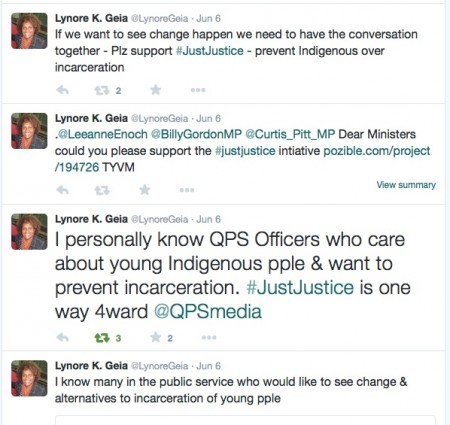 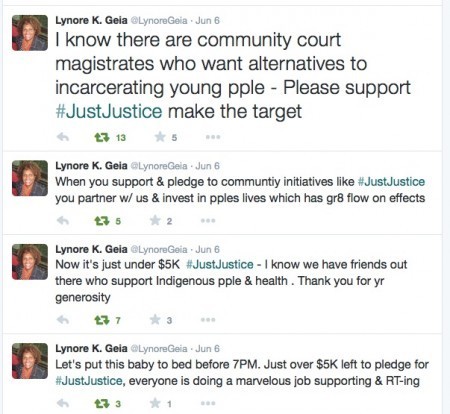 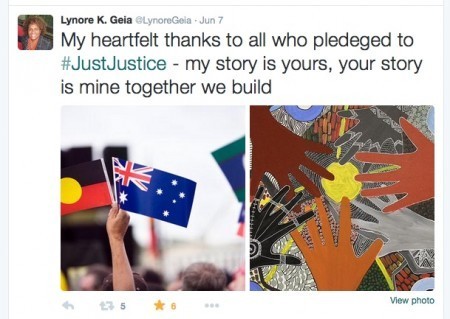 And thanks for sending in photos of your #JustJustice rewards. 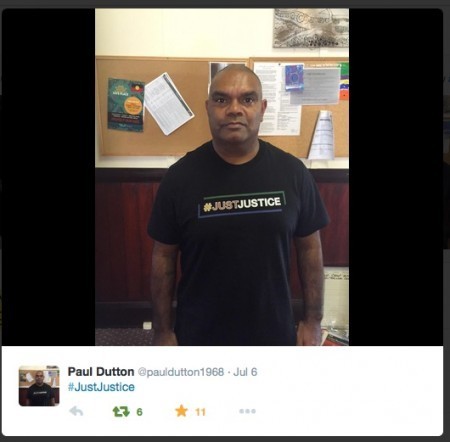 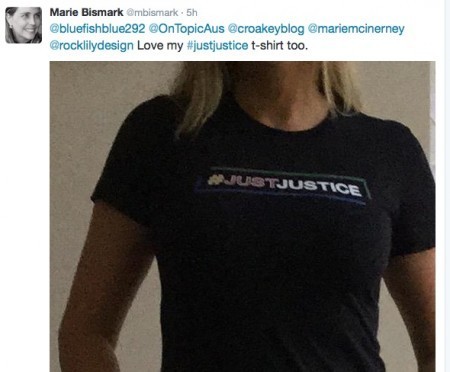 Warm thanks to all those who donated to the campaign

Our sincere thanks to the other 44 donors who chose to remain anonymous.

If you donated but your name is not mentioned above, it may be because your pledge was not realised (due to problems with the credit card, Pay Pal etc) or because you asked to be anonymous. If you believe you should be listed here, please get in touch with @croakeyblog. 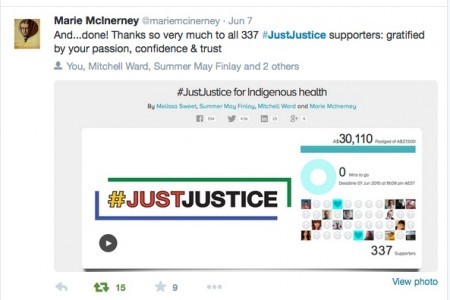 And a final word, all the way from the US:

• The first #JustJustice article, by Darren Parker, a Ngunawal man and Phd candidate at Melbourne Law School, will be published at Croakey tomorrow. Stay tuned…