The challenges for prevention, for refugee communities and for the justice system were among the topics of discussion at the Australasian Fetal Alcohol Spectrum Disorders (FASD) conference in Brisbane yesterday.

Journalist Mardi Chapman filed these reports from the conference.

In addition to so many other challenges, refugee communities in Australia are also grappling with the consequences of alcohol-exposed pregnancies.

Alcohol misuse and dependence is a global phenomenon and the fraught process of seeking asylum in another country is as likely to exacerbate as relieve the underlying drivers of risky drinking.

Dr Raewyn Mutch, a pediatrician with the Refugee Health Service of The Princess Margaret Hospital for Children, said many refugees were using alcohol as a coping strategy against layers of trauma.

“Refugees’ history of trauma and violence, loss of home and family, and prolonged or uncertain transitions through camps and detention centres predisposes them to high rates of alcohol consumption,” she said.

“Alcohol is even easier to get in Australia but their life here is still hard. Issues of acculturation and dissonance with families can further escalate consumption of alcohol and risk of alcohol exposed pregnancies.”

Under the influence of pre-pregnancy drinking

The Australasian Fetal Alcohol Spectrum Disorders (FASD) conference was told that pre-pregnancy drinking behavior was the strongest predictor of whether women would drink during a pregnancy.

According to results from the Australian Longitudinal Study of Women’s Health, a history of binge drinking before pregnancy doubled the odds of women consuming alcohol during pregnancy.

“The results support earlier international findings that pre-pregnancy alcohol consumption is a consistent predictor of alcohol use in pregnancy,” she said.

Women who were pregnant before Australian alcohol guidelines recommended no alcohol as the only safe option were also more likely to drink during pregnancy.

Women who had ever had fertility problems and those with a Health Care Card (a proxy for low income) were less likely to drink during pregnancy. 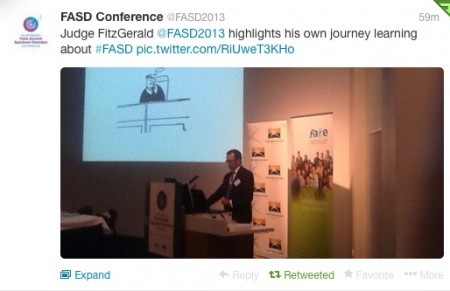 A cycle of re-offending by young people with FASD very quickly leads to harsher penalties including prison terms.

Yet Auckland District and Youth Court Judge Tony FitzGerald argues that such a court system presumes that people have the ability to learn from the consequences of their actions.

“I question if there is any justice in not looking at new ways to reduce the re-offending by people with underlying neurodisability such as FASD,” he said.

With a special interest in the concept of therapeutic jurisprudence and a sympathetic focus on the wellbeing of offenders who may also have treatment needs, Judge Fitzgerald has built more understanding, support and coordination services into the Youth Court.

He said he has changed the way young offenders are spoken to, the structure of the courtroom, and ultimately, the degree of flexibility over sentencing.

“People with FASD are typically entering the criminal justice system at a much greater rate and once there, they are at a far greater risk of worse outcomes, especially if their FASD is not identified as an underlying cause.”

“This new approach still holds people accountable for their actions but there is an opportunity to consider the context and underlying cause of the offences.”

He said having forensic services present in the court provided easier access to screening and assessment for FASD.

“Diagnosis is crucial as is interagency coordination. FASD is a lifelong disability which requires the application of structure, support and supervision.”

• You can track Croakey’s coverage of the conference here and on Twitter at #FASD2013.

PrevPrevious“I am just writing to you to share some news that test the human spirit from my country….”: The human experience of climate change
NextHighlighting the disconnect between education/training and health workforce realities (plus #HWA2013 Twitter wrap)Next