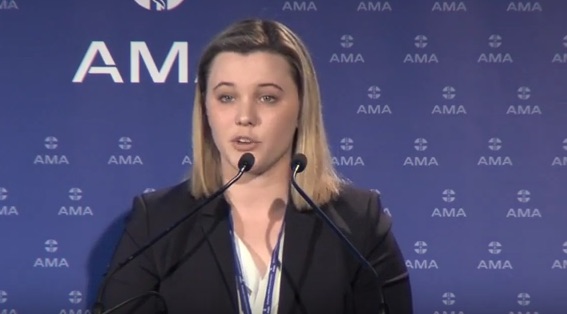 The Australian Medical Association is likely to be less active in advocating on issues such as asylum seeker policy in the wake of the election today of a new president, Western Australian obstetrician and gynaecologist Dr Michael Gannon.

Gannon has told journalists (see the SMH and News Ltd) that he will be working to repair the AMA’s relationship with the Government, suggesting this had been damaged by the association’s advocacy for asylum seekers.

The campaign against the freeze on Medicare rebates would be a priority, the ABC reported.

While many in politics and policy are no doubt reading up on the new president, the one to watch may well be the president of the Australian Medical Student Association, Elise Buisson.

She gave an outstanding presentation to the AMA’s national conference in Canberra over the weekend, stressing the profession’s role in advocating on issues such as climate change and the social determinants of health.

Health is not determined in waiting rooms or clinics, but socially, she said.

Buisson spoke of medicine’s failure to create environments that fostered women’s leadership, the challenges facing Indigenous medical students, and also highlighted the importance of the AMA’s advocacy in areas such as asylum seekers, climate change and marriage equality.

She said outgoing president Professor Brian Owler’s speech to an asylum seeker health forum had been a landmark in encouraging her peers to engage with the AMA.

“Ending offshore detention engages medical students more than any issue I can name,” she said.

“I cannot get medical students to march in the streets for their own job prospects. But to protest the health impacts of our nation’s treatment of refugees, they will make their own placards.”

She urged the AMA to give voice to the issues her peers are passionate about.

Watch her presentation below, and read more from her here. (Croakey plans more coverage later this week on the political and policy implications of the AMA’s change of leadership.)

(Croakey apologies for an error in the spelling of Buisson’s first name in the first version of this post).