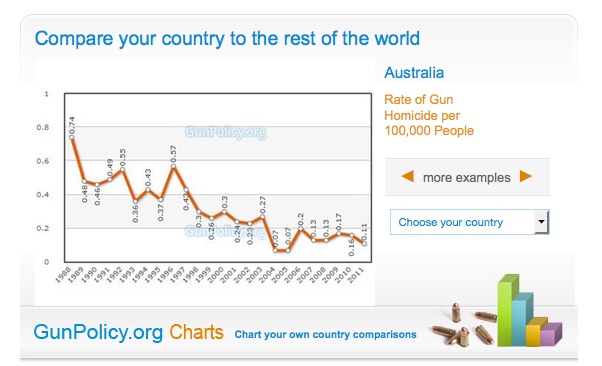 Many people and communities, beyond those directly affected by the Port Arthur shootings, are living with the legacy of such tramatic events, they say.

Meanwhile, for reasons that they explain below, their analysis of contemporary gun control issues will be published at Croakey at a later stage.

The 20th anniversary today of the Port Arthur massacre is undoubtedly most distressing to the survivors, the injured, the families of the victims and the first responders alike.

We met with the still highly active network of them from around Australia, including their legal, health, academic, police, criminology and government advocates, who were welcomed at NSW Parliament House yesterday and swapped torrid campaign experiences, reflected over many heart-wrenching stories, grief and sad memories still fresh.

This was largely thanks to the persistent work of Rebecca Peters and Sam Lee and others from the National Coalition for Gun Control in organising and keeping people in touch.

This anniversary also may rekindle the vivid transgenerational memories of the extreme traumatising of families of earlier massacre victims, such as Aboriginal and Torres Strait Islander descendants of those massacred in Australian colonial history.

It may also rekindle the traumas of our transcultural communities, asylum seekers and refugees from genocidal mass killings in and displacement from their countries of origin from post-20th century wars to more recent times.

Ms Cate Swannell, the Medical Journal of Australia News and Online Editor, has just published a column about the Port Arthur massacre for the 26 April issue of “MJA Insight” which has pointed to the forthcoming publication of our article in the MJA, on The Port Arthur Massacre and the National Firearms Agreement: twenty years on, what are the lessons?

This perspective/for-debate article, combining appraisals of the current psychiatric, public health, epidemiological and medico-legal evidence, is by Michael Dudley, Alan Rosen, Philip Alpers and Rebecca Peters, and will appear in the MJA on line on 23 May 2016 and in hard copy in the 6 June issue of the MJA.

Ms Swannell states: “The authors address the gun lobby’s claims that gun violence is attributable to mental illness, not gun ownership, and ask what role health professionals can play “in working with legal authorities to monitor and assist regulation of firearm access, especially among high-risk populations”.

She cites the paper’s authors: “Clinician involvement must be complemented by wider gun control measures. The gun lobby’s turning the firearms availability debate into a question about whether people with mental illness histories should access such weapons is a calculated appeal to prejudice. Complacency has “somewhat eroded” the NFA and it needs “review, revision and tightening.”

Though there is an opinion piece ready for Croakey readers for today, the MJA staff have determined that publication of such an op-ed piece would be “in breach of its embargo and are unable to give permission for this”.

Croakey will publish the full opinion piece when this embargo on the authors’ related but different academic article can be lifted.

• Meanwhile Croakey suggests readers wanting more information on the current state of gun control in Australia and globally check this excellent initiative, GunPolicy.org which provides evidence-based, country-by-country intelligence from a broad range of official and academic sources. The site is for researchers, officials, journalists and advocates who need accurate citations and rapid access to credible sources. Readers can create graphs and charts according to their interests and queries, and check the latest news from around the globe.